BACK TO ALL NEWS
Currently reading: First ride: 2019 Mercedes-AMG A45 S prototype
UP NEXT
Sorry, wrong number: the forgotten problem of car clocking

It’s covered in kaleidoscopic plastic wrap camouflage. Inside, it glistens with high definition graphics. A good five months from its planned UK introduction, it is still very much a prototype with cabling and other paraphernalia used to attach data logging and testing equipment scattered throughout its cabin. Whenever I get up close to it I’m joined by a German engineer who convinces me I shouldn’t poke around for too long.

Because it is all a big secret. The only information AMG is prepared to divulge about its second-generation A45 4Matic ahead of its highly anticipated unveiling is that it will drift. Forget that there isn’t an official power figure or any other information about Affalterbach’s new four-wheel drive hyperhatch yet. What Mercedes-Benz’s performance car division wants to you know is that, with its three-stage ESP disengaged and the push of a driving mode button as well as some steering wheel paddle protocol used to engage its advanced rear differential, its rear-end will go sideways just like that of the rear-wheel drive BMW M2 Competition.

This, I can confirm, because I’ve ridden in the new 2019 model year A45 4Matic. And, yes, it does attain seemingly impossible slip angles with all the rabid throttle induced cornering ambition of a high powered rear-wheel drive supercar when the driver wants it to . . . on ice. In fact, much of my time in AMG’s latest model was spent peering out the passenger side window as Reinhold Renger, the head instructor at the company’s so-called driving academy, worked his magic behind the steering wheel, displaying the effect of that rather special new differential around a giant test track etched into a frozen lake in the north of Sweden in the middle of winter. 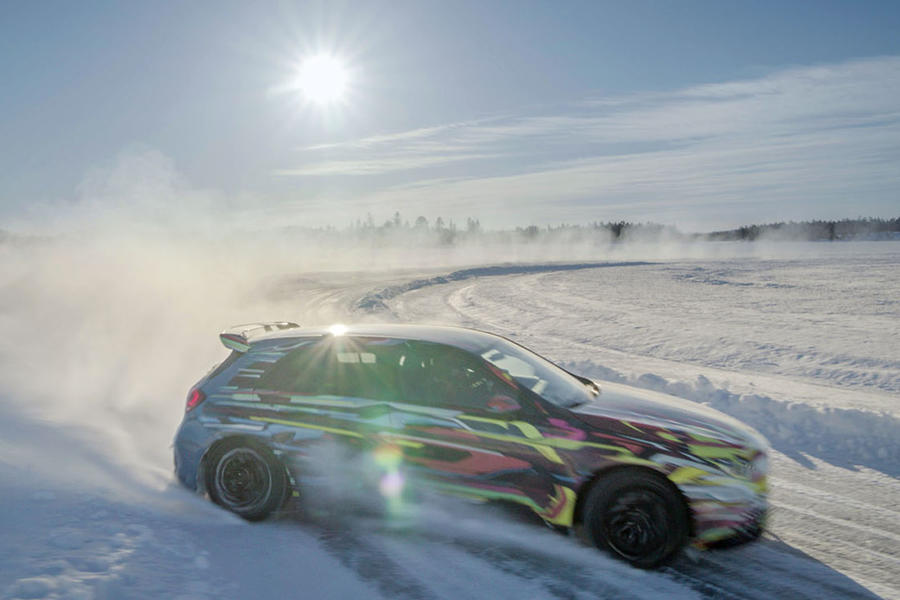 Having only experienced it from the passenger seat, I can’t tell you about the nuances in its driving character. But at this stage, it appears AMG has managed to deliver on its promise to make the new model a more rewarding car to drive than its devastatingly rapid predecessor. From what I experienced, the new range-topping A-class model is a more multi-faceted machine with seemingly greater maturity than before. As always, however, proof of this will come when we get to drive it later this year.

This much we know about the new A45 4Matic, even if AMG is yet to confirm as such: it runs a new transversely mounted turbocharged 2.0-litre petrol engine mated to an eight-speed dual clutch gearbox. The four-cylinder unit, assembled on site at AMG’s headquarters on the outskirts of Stuttgart, is a development of parent company Mercedes-Benz’s M260 engine, as used by the newly-introduced A35 4Matic, without mild hybrid boosting.

With a bore and stroke of 83.0mm and 92.0mm, it features twin overhead camshafts and four valves per cylinder as well as a newly developed twin-scroll turbocharger and otto particulate filter. The changes over the standard powerplant are so comprehensive it is considered by the German car maker to be an all-new engine.

In standard form, it delivers 383bhp, which is quite an achievement in itself. But with added turbocharger boost pressure and some other yet to be revealed tweaks, in the new range-topping A45S 4Matic+ its output increases to a rather exceptional 416bhp. This equates to 209bhp per litre or 46bhp more than the specific litre output of the twin-turbocharged 4.0-litre V8 engine used by AMG’s headlining GT R.

It also endows the new top-of-the-line A45 4Matic with 46bhp more than its predecessor, 12bhp more than the M2 Competition and 22bhp more than perhaps its keenest hyperhatch rival, the four-wheel drive Audi RS3. 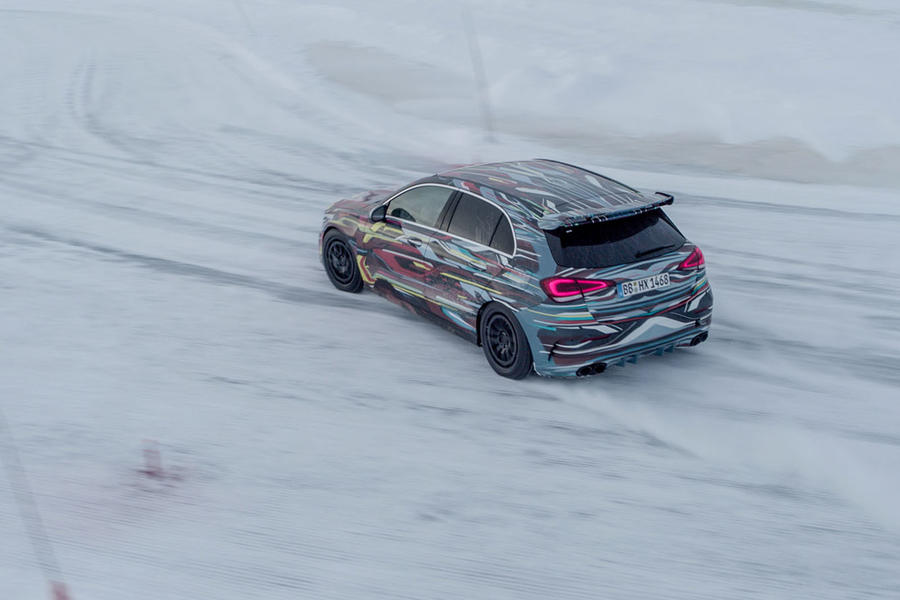 The real secret to its performance, however, lays in the adoption of a new four-wheel drive system developed in a partnership between AMG and Austrian engineering specialist, Magna Powertrain. The active system uses electro-hydraulic actuation instead of the electro-mechanical operation of the old reactive system used by the previous A45 4Matic. It retains much of the hardware used to dole out drive to the front wheels, but it replaces the single rear differential with two separate clutches that are capable of apportioning up to 100 per cent of power not only to the rear axle but individually to each rear wheel depending on factors such as prevailing traction, throttle position, yaw angle and steering angle. Overall, it operates in a similar manner to the set-up used by the latest E63S 4Matic+.

Our very first outing in the A45 4Matic+ prototype consisted of a short journey along snow-strewn roads from a base near Arjeplog to a test track upon a frozen lake where AMG conducts much of its winter testing in northern Sweden. There, we rode shotgun around a giant skidpan and other handling courses in a brief but intensive introduction to the new AMG model.

There’s nothing too surprising about the look of the new AMG model when you get up close. Behind the unique camouflage of the prototype is a regular fourth-generation A-class bodyshell that has been modified in various areas, including the front fenders, which have been widened to accommodate a slightly wider front track than that used by the A35 4Matic. Like its lesser sibling, it also adopts a prominent wing to smooth airflow along the roof and increase downforce at the rear at speed. Other details, such as the design of the front and rear bumpers, are hidden for now.

Inside, the similarities with the A35 4Matic continue; you sit low on heavily contoured front seats peering ahead to somewhat cluttered multi-function steering wheel and a dashboard topped by a long high panel housing both digital instrument and infotainment displays that form part of Mercedes-Benz’s excellent new MBUX operating system. Renger says the benefits of the new four-wheel drive system are instantly noticeable out on the ice. “There’s clearly more traction. It is an active system; we can send more power to the rear wheels and then apportion it left and right with greater precision. You’re aware of it straight away,” he says. 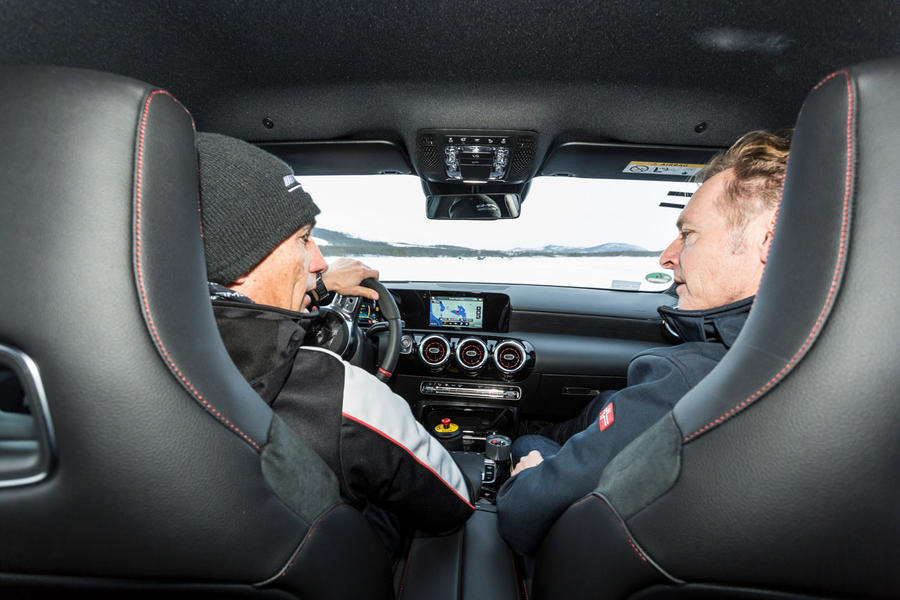 Engaging the drift mode, though, requires more than a press of a button. First, the AMG test driver scrolls through the comfort, sport, sport+, slippery and individual settings on the drive mode indicator with the touch pad located between the front seats before selecting race. He then thumbs the ESP button to the off position and pulls both the left- and right-hand steering wheel shift paddles forward to select manual prior to one last pull of the right-hand shift paddle. “It’s the confirmation command. Without it, the system defaults back to the nominal race mode,” says Renger.

When the multi-stage set-up is complete the word “Drift” appears in the middle of the instrument display, and we’re off. Almost immediately, the engine is running at over 5000rpm and with a small tug of the steering wheel the rear end of the A45 4Matic swings around as if by command. Within 100 metres our sight is no longer focused through the windscreen but out the passenger side window as we speed anti-clockwise around the huge skidpan with the steering where almost on a full turn of lock.

As well as being able to send power to the rear wheels and also apportion power between the rear wheels, the new four wheel drive system is also claimed to boast faster reaction times. “There’s improved response to throttle inputs. And the shift of drive between each rear wheel is more precise. It’s not as brutal as before,” explains Renger. 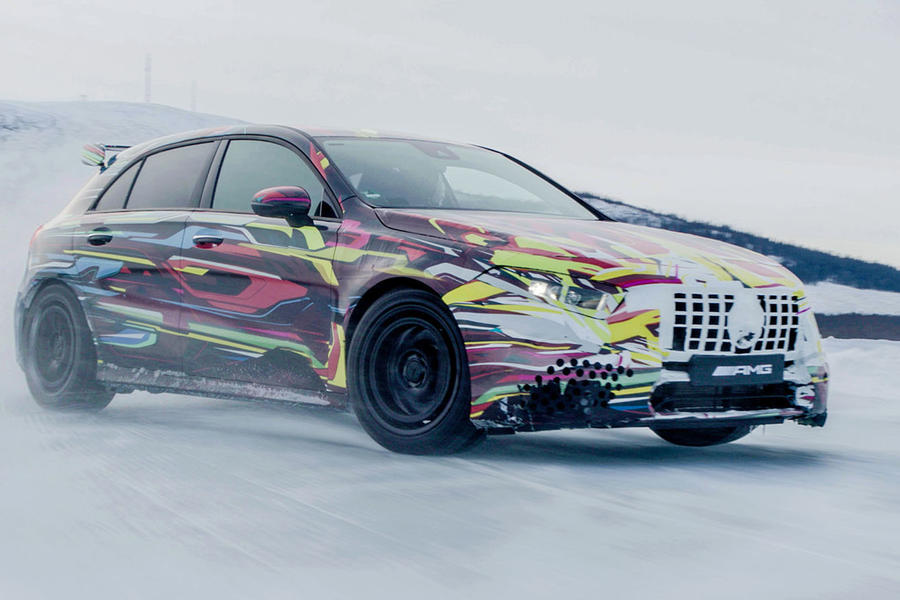 We continue to circle for a good few minutes, and then repeat it all over again; all the while the engine revs alter as traction upon the ice varies. From the passenger seat, it all looks incredibly controlled; the slip angle differs depending on where we are on the skidpan but at no time does Renger need to resort to over judicious use of the throttle and steering to induce oversteer. When it is properly hooked up, the new four-wheel drive system is programmed to deliver close to 100 per cent of the drive acting on the rear axle to the outside wheel. However, it is never driven exclusively by the rear wheels. There’s always some degree of drive to the front wheels to retain balance.

As hurriedly as it began, though, our passenger ride ends. With a test program to get through the AMG engineering team needs to get to business before the sun disappears over the horizon.

Mercedes-AMG has clearly left nothing to chance with the new A45 4Matic. Intent on remaining at the head of the hyperhatch ranks, it has not only provided it with the world’s most powerful series production four-cylinder road car engine yet but also the transmission hardware to make it a truly remarkable car. Its new four-wheel drive system is one of the most advanced, if not the most advanced, set-ups ever featured on a transverse engine road car.

On this showing, it not only looks to have provided the new AMG model with the ability to drift with greater eagerness and precision than ever before but also with an unbeatable advantage in terms of traction and outright driving ability.

cannot wait till this comes out the way this thing looks is awesome, also the tech that comes with it is just incredible.

You see one you go meh, just another four door blob, because?

Sounds very fast and exotic, but so much to go wrong especially the crazy boost it has. Lets hope it's reliable then.
View all comments (7)