The Mission R shows how Porsche sports cars could be electrified. Our man might need some convincing...
Open gallery
Close

Well, this is strange: a race car that comes with its own 45-minute safety briefing, conducted days before you’re to climb aboard. Then, just before you do, there’s another. I could describe it all to you, but the essence is that if all the dashboard lights suddenly turn red, get the hell out.

There’s some advice about how to exit in a hurry while touching either the car or the ground but never both at the same time, but the days of ejecting myself from a car like a champagne cork departing its bottle are probably behind me, if they were ever before me. But there are 900 volts of electricity in here, so I guess it pays to be careful.

‘Here’ is the interior of the Porsche Mission R, and here’s the thing: this is a concept car, the very same one that was on the Porsche stand at the Munich motor show in September. There is another, but it’s a mock-up for show purposes only. In terms of cars that actually work, this is the only Mission R in existence, and there’s no plan to build another.

It has no official value, but unofficially I happen to know it’s valued at €8 million (£6.74m). Yet here I am, clad in fireproof overalls from balaclava to boots, about to take to the track outside Porsche’s Los Angeles Experience Center. And a couple of exploratory laps in the passenger seat have revealed that if you leave the track for any reason, you will crash. There’s no run-off at all... 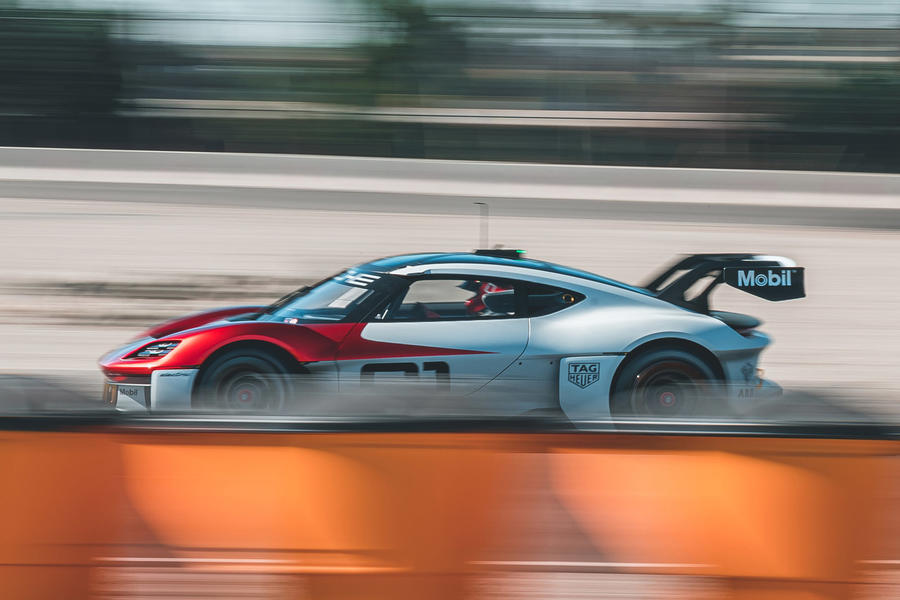 But before I fire it up, let’s just briefly remind ourselves what it is, why it was built and what if anything we can read into its existence. For one thing we know about Porsche is that it never ever does a concept car without a broader purpose in mind. In this case, it’s the company’s first electric sports car.

The start point was a 718 Cayman, but by the time the team was finished nine months later, only small parts of the centre section remained; the rest is bespoke. I had hoped that the car would actually be based on the platform of the next Cayman, due in 2023 or 2024, but no such luck.

The Mission R’s project manager, Michael Behr, told me: “It’s actually very similar in size. There’s only 1mm difference in wheelbase between the Mission R and the next Cayman, but we only found out after we had done the car! It’s a complete coincidence.”

What it probably owes most to, powertrain aside, is the 911 RSR Le Mans racer. It has the RSR’s rear axle, its front suspension (the rear suspension is a strut not common to any other Porsche) and even its fiendishly complex steering wheel.

The powertrain is mighty: it has an 80kWh battery providing juice to front and rear motors that have a combined output of just under 1100bhp in qualifying mode. In race mode, which is what we’re restricted to today, it makes a trifling 670bhp. All out, it can hit 62mph from rest in less than 2.5sec and not stop accelerating until it hits 192mph, despite that high downforce and, as it turns out, predominantly ethically sourced natural flax fibre bodywork. 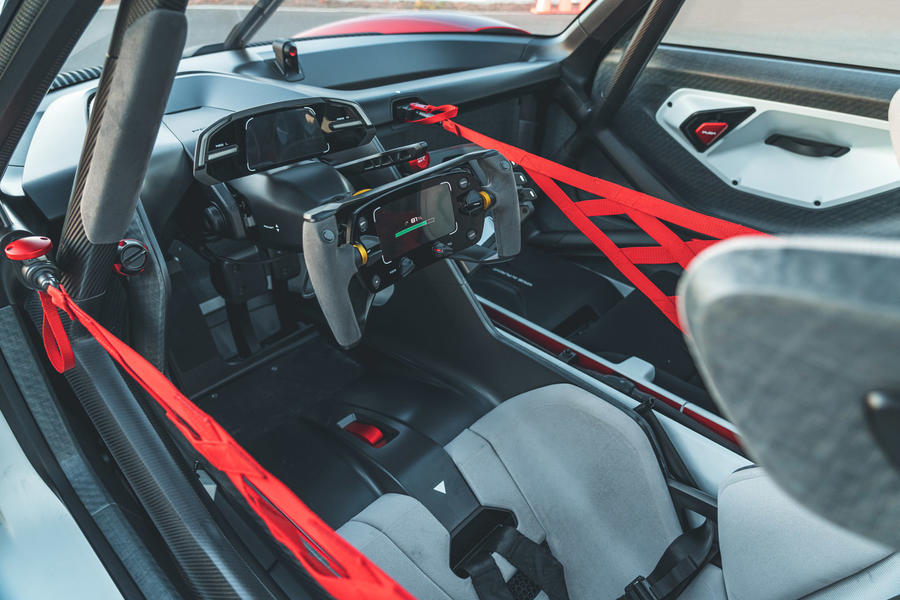 The interior is bewildering until you realise that, beside the steering, brake and accelerator, there’s a grand total of one control that you need to master, which is a switch on the wheel that makes the thing go.

I’m obliged to say here that because this is an unbelievably valuable concept that was made with cutting-edge technologies and hasn’t been through the development process of a normal Porsche race car, it was officially limited to 62mph. Disappointed? Me too. Dreadfully. So I need to choose the following words carefully. Had the people running the car, who include Le Mans winner Marc Lieb and Nürburgring 24 Hours winner Lars Kern, decided that this particular rule was – how should I put it? – to be honoured more in the breach than the observance on the condition that I didn’t own up to it in public, then I would be able to base the driving impressions that follow on going a whole lot faster. And from that you may deduce what you will.

The track is tight and technical, full of unhelpful cambers, even more unhelpful bumps and some elevation changes. The radio crackles into life in my headphones: “Andrew. Position one on the steering wheel. Proceed onto the track when you’re ready.”

And that’s it. You then just squeeze the throttle and away you go. And the first big surprise is it’s actually quite noisy in here – so noisy, in fact, that you realise the lengths that makers of electric road cars go to in order to keep their motors quiet. 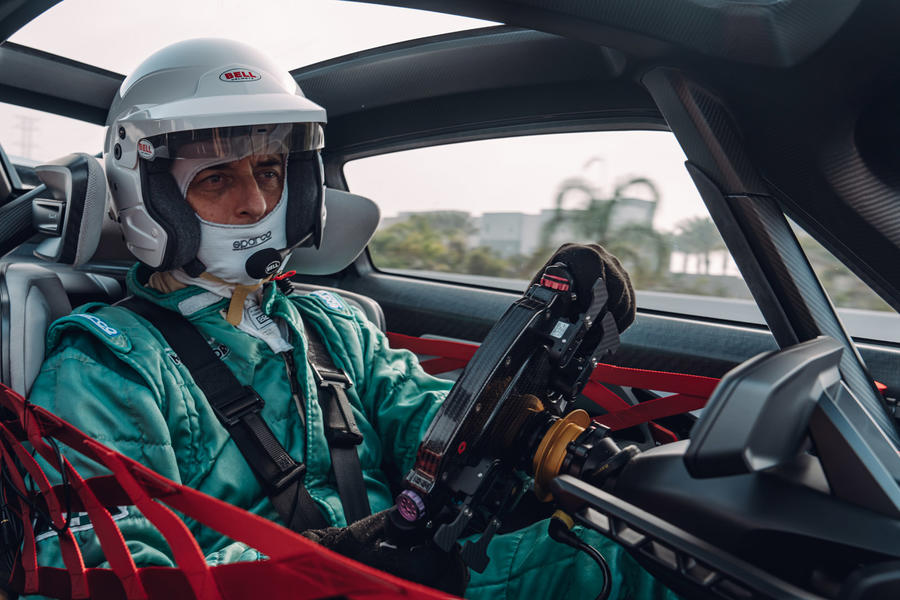 You’re almost immediately on a straight, so you straighten your right foot at once. With four-wheel drive and vast Michelin slick tyres, you’re never going to spin up the wheels, even though the car has no traction control or, for that matter, anti-lock brakes. For all the technology crammed into this car, you are, dynamically speaking, on your own.

With such traction and power, the Mission R goes from near standstill to very, very fast without leaving time for you to ponder any of the speeds in between. This is the first time that I’ve driven an electric race car, and I feared that I might need time to get used to the instant throttle response, but actually it’s easy, because it’s so linear. It’s not like there’s a torque curve to understand: it’s just all there all of the time.

On that serious rubber, with its RSR suspension and massive (albeit unspecified) downforce, the Mission R will pull 2g in the corners, so there’s no lack of lateral grip, either. But while the back of the car is rooted to the spot and needs to be provoked before it will move, the front can peel away from the apex quite easily – although the resulting understeer can be killed by lifting off the throttle. Besides, as Kern pointed out to me, “if you’re not happy with the balance, you could just change it mid-race”. You could because – in theory, at least – you would be able to choose and change the front-to-rear torque split on the move from a control on the wheel. Which would be quite a cool trick. 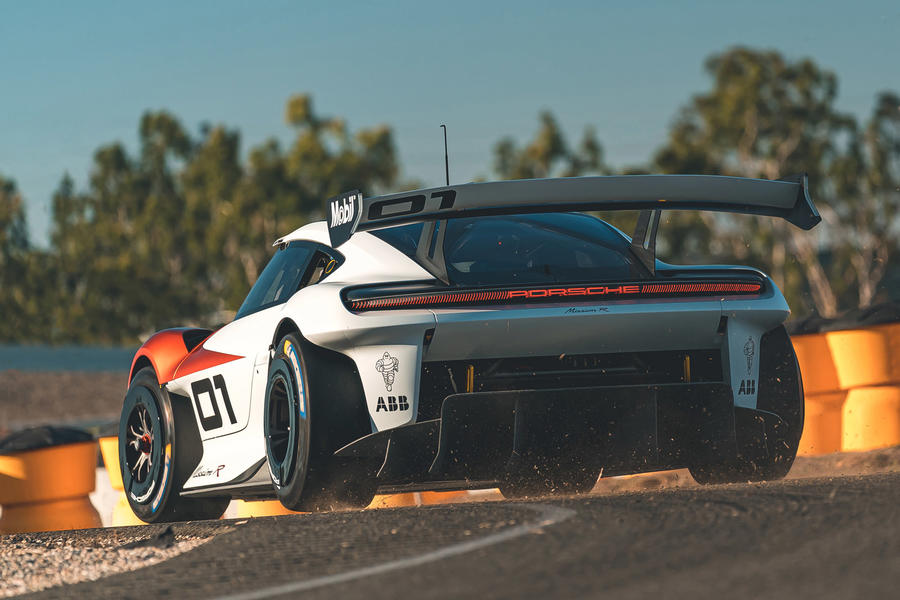 I’m more concerned with not crashing. This isn’t a difficult car to drive; on the contrary, it’s positively benign. But the barriers are close and the price of getting it wrong isn’t a number on which I choose to dwell. Ten laps later, I’m back in the pits.

What interested me, as someone who has pointed out regularly the limitations of EVs from a dynamic enjoyment point of view, is that when you’re driving the Mission R, that’s not how you think, because you’re just too busy. I’m not saying it wouldn’t be more entertaining still with a howling flat six and some paddles to pull, but even with pure electrical power, the Mission R is involving, rewarding, fascinating and, given that it’s meant to be a concept, unbelievably well resolved.

So what, if anything, does it say about the future of the Porsche sports car? We know Porsche never does these projects in a vacuum, and this is no exception. You will remember how little changed was the Mission E of 2015 when it became the Taycan in 2019. So at the very least, what you’re looking at is a big part of the future of Porsche customer racing. But there’s more here. Nothing is certain, but should Porsche decide that an electric Cayman is what’s required (and let’s face it, that has to happen sometime), this probably isn’t a million miles away from what it will look like or indeed how it will drive.

And while I would still rather stay in our internally combusted present, that’s not an option any longer; and if the electrically powered future can be anything like as much fun to drive as this, that’s something not to be dreaded but to which we can all genuinely look forward.

How being four-wheel drive makes the Mission R lighter

I asked Mission R project manager Michael Behr why his team didn’t make the car rear-driven and thus lighter than the impressively light 1500kg that it weighs with a driven front axle. There were two answers. The obvious one is that with nearly 1100bhp in qualifying mode, traction is seriously important. “But,” added Behr, “it would also make the car heavier.”

“Eh?” said I. But it’s true: so great is the amount of energy recovered through braking on the front axle (more than 40% of which is done by the motor alone) that if you dispensed with it, you would need a battery 50% larger to compensate, and because batteries weigh morethan motors, the Mission R would become heavier.

Interestingly, when you drive the car hard and apply the brakes, it’s not possible to tell where the regenerative braking from the motor stops and traditional braking from the huge discs commences. 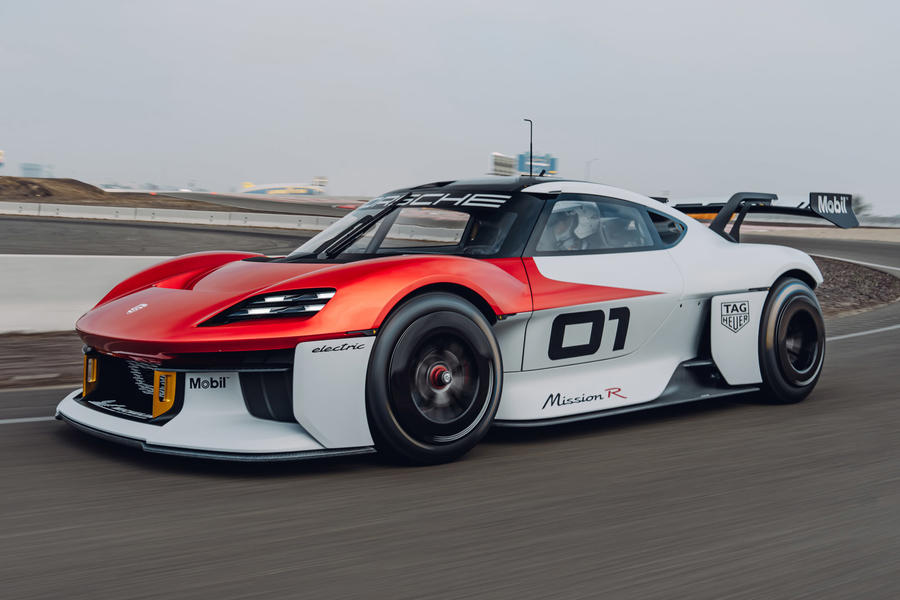 I'm always disappointed that Autocar Luddism taints these kinds of test opportunities.  Why doesn't Porsche get some real car enthusiasts in to test drive this car, instead of the dinosaurs, sorry, I mean automotive journalists.  When the Model T Ford was launched, today's automotive journalists were the kind of people who were stood at the back, saying that they preferred their horse and cart.  Back in the 21st Century, this car is awesome and I can't wait to see a road-going version.  In fact, I'm already planning the finance.

Sooooo glad I got to drive in-line 4 & 6 and V8s and V12 engined proper racing cars. DFVs, Lamborghini, Hart (na and Turbo) and BMW. Call me a dinosaur but the future looks crxp to me.

I hear you john, I drove a Taycan turbo S  over 6 months ago and never once for one moment have I thought about buying one. Now the GT4 I sold, I miss that big time! But lets be honest the Model T was probably cr#p to drive but look where we got to?

martin_66 23 November 2021
Porsche really should build a road going version of this, it would sell by the bucket load. With a perfect combination of modern supercar and traditional Porsche it is the best thing they have made for a long time.
Boris9119 23 November 2021