Don’t be deceived by the twee(d) aesthetic: Morgan is no stranger to motorsport.

It won its class in the 1962 Le Mans 24 Hours, visited La Sarthe again in the 2000s and has its own one-make series. Competition-prepared Morgans are in action most weekends at venues around Europe and the US, because Morgan and its clients like to race.

But never in its 111 years has the company been better positioned to go racing than it is today. For that you can thank the new CX chassis, which is the basis of the latest road cars and so will underpin any track-related progeny they spawn. It’s an aluminium monocoque, and in terms of stiffness the old steel ladder frame doesn’t compare. Think dry spaghetti versus cooked. The CX is also lighter. It should therefore bring big benefits not just in inherent responsiveness and agility but also in respect to the increased precision with which the new double-wishbone suspension can be tuned and controlled.

To see what’s possible, Morgan has turned two Plus Fours – one with a six-speed manual, the other with an eight-speed auto – over to students on the Motorsport Engineering BEng course at Wolverhampton. They will explore the capabilities and limitations of the CX chassis and develop the Plus Four for club level and endurance racing.

We drove the manual, one week before it headed to Anglesey for the 12-hour Race of Remembrance (the cars’ first proper outing, in which both finished). 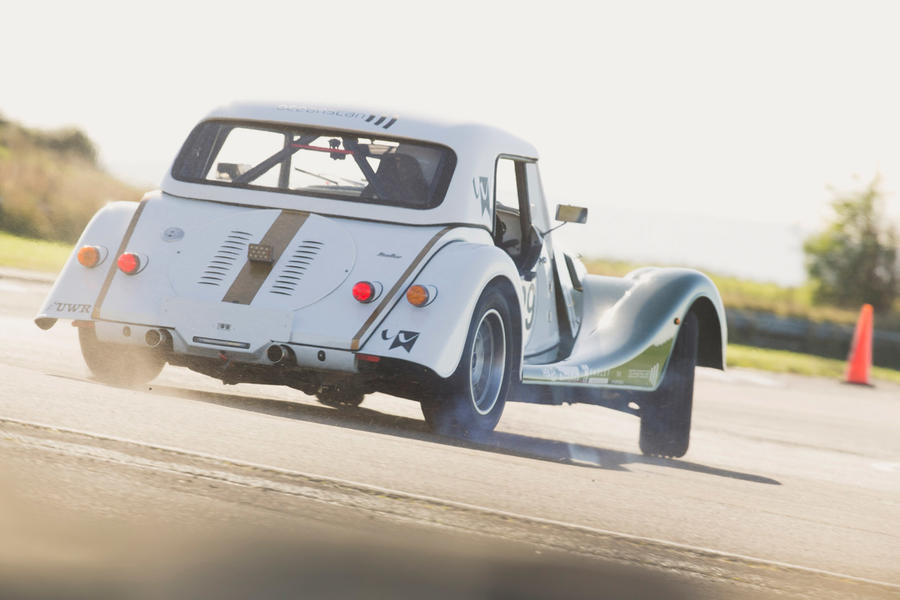 With the ‘Clubsport’ project still incipient, the road car’s 255bhp BMW engine remains unfettled and drives the rear wheels through an open differential, but that’s likely to change. Quaife’s torque-sensing diff is under consideration.

The tyres are also road spec (Avon ZV7s) and the suspension geometry is mostly unaltered but for the new Spax coilovers, which lower the ride height and possess marginally higher rates, and that’s it.

On track, this hardened Plus Four is neither especially quick nor razor-sharp. There’s too much roll for that, so even if the steering ratio were usefully sped up, the body wouldn’t keep pace with your commands during direction changes. On these tyres, the chassis has only modest grip levels anyway, and without an LSD it also wants for traction not only through Llandow’s tight esses but through the fast final sweeper, too. There’s clearly still far more ‘road’ than ‘track’ in this car’s DNA.

However, if the recipe is currently a little underdone, there’s clearly plenty of potential. The torsional stiffness of the CX chassis is obvious in the way the car’s two axles are in sync with one another, the rear faithfully following the front once you learn to load the suspension up sensitively and pour the car into bends, rather than forcing it. Roll is generous for something track-focused, but the rate at which it happens is consistent, and the car flows elegantly, being about the least spiky device ever to feature a plumbed-in fire extinguisher. Up the ante and the Plus Four begins to behave like the crossply-shod racers at the Goodwood Revival: it’s lavishly progressive at the back axle and needs you to lightly work away at the large steering wheel.

It’s all good fun and so satisfying when you string one or two more expressive laps together.

Remember also that the Plus Four is a light car. The road car weighs 1013kg dry, and with the roll-cage putting back what the completely denuded single-seat interior saves, the ‘Clubsport’ weighs about the same. This gives the car an unmistakable delicacy as it shifts its footing from corner to corner. 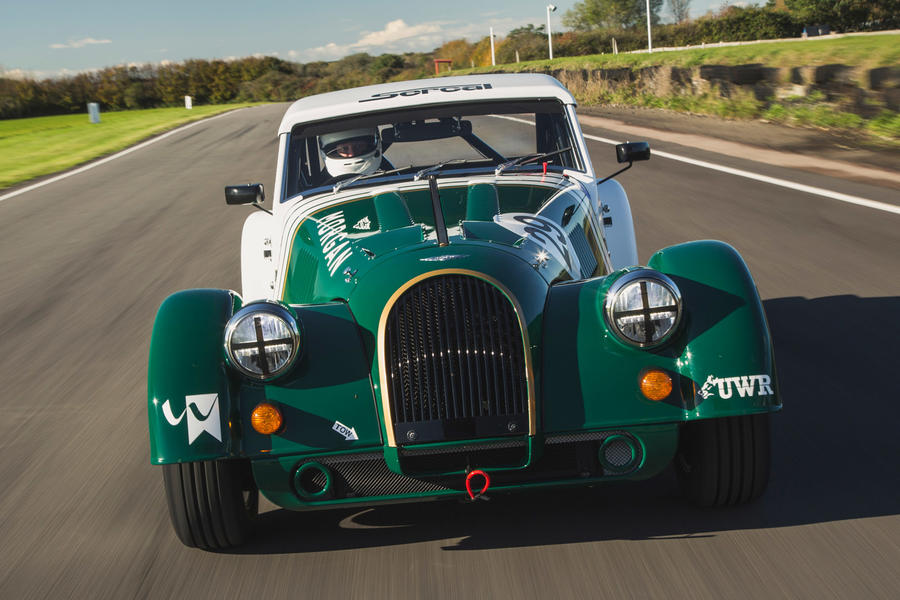 The intention now is to improve roll stiffness. Particularly at the front, which would lead to a more understeer-led handling balance that would in turn allow the car to be braked into bends more aggressively, with better mid-corner stability thereafter. Expect thicker anti-roll bars, another generous drop in ride height, an upgrade to semi-slick Avon ZZR tyres, greater negative camber and more capable dampers to feature, possibly from Öhlins. And that LSD.

With the CX, Morgan could easily take the Plus Four to a very serious level of race-track capability. Where it eventually chooses to draw the line will depend on budgets and customer expectations, but the fun-loving, faintly old-world dynamism evident at this stage of the R&D story is something well worth preserving.

I thought this Clubsport Morgan has been available for some time. Can't see what is new now.  Didn't Chris Lawrence design the ally chassis/platform when they started using a BMW motor?  Correct me if I'm wrong.