Success will depend on pricing, but the fundamental Grecale proposition seems strong, with good ride and handling, and more character than most
Open gallery
Close

We arrived at the Balocco Proving Ground expecting to feel the frost that comes with being designated persona non grata.

It'd been only weeks since Maserati's flagship Quattroporte Trofeo saloon was given two stars in its full Autocar road test – a real demolition, but deserved – and people tend to have long memories in the high-stakes automotive industry.

Happily, both the personnel and the new product at Maserati seem to be moving on, and our brief first taste of the upcoming Grecale suggests it is categorically not heading down the same path as the QPT. This is just as well, because the Grecale is undoubtedly Maserati’s most important car for a long time. It aims to bring a level of luxury and flair as yet unknown in the big-selling mid-sized SUV class, and it’s going to be pivotal to Maserati's finances and also to its journey into the pure-electric sphere. Under the Folgore line – Italian for ‘lightning’ – an electric Grecale will be shown in 2022, and that car will eventually sit alongside similar versions of the new MC20 supercar and the upcoming replacement for the Granturismo.

Our pre-production Grecale is a ‘synthesis’ vehicle. It exists as an amalgamation centre for the massive number of subsystems being honed on some 250 other prototypes. It means that at any given time, this particular Grecale is the most advanced Grecale, and it is currently close to being the finished article. Were it not for the shortage of semiconductor chips, development would already have been halted and the car would be on sale. As it is, the launch has been stalled until late spring, and the tweaking can continue a little longer.

One thing we can't really assess today is the interior, because the dashboard is covered up on our test car. Still, we have a peek underneath the fabric cladding. There’s lots of leather, and a broad, glossy infotainment touchscreen halfway up the dash. The traditional Maserati clock is also now digitally represented, with the royal-blue dial able to be switched between showing the time, g-force, heading and brake/throttle pressure. Elsewhere inside, the front seats strike a good balance of softness and support, and their scalloped backs means there's unusually generous second-row leg room (to match the excellent head room). 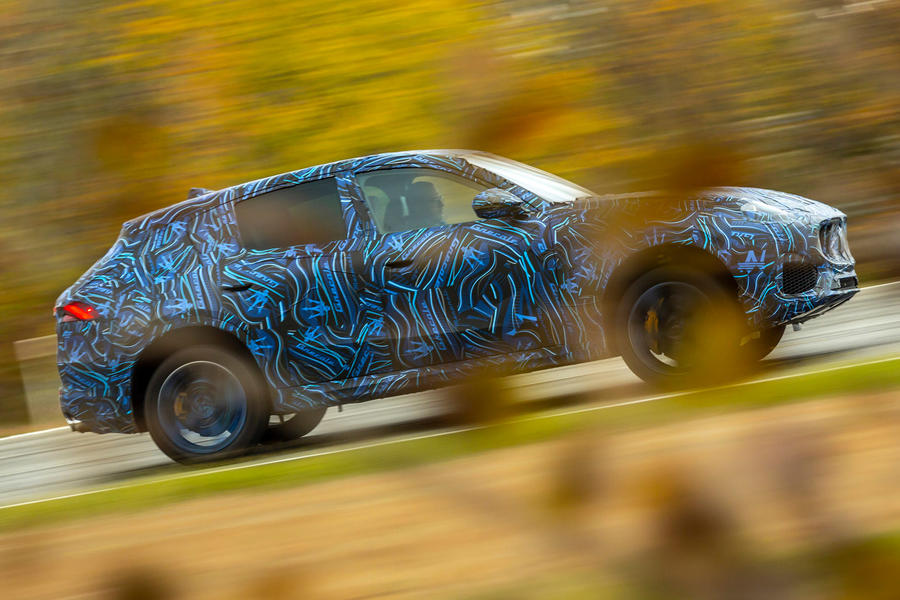 In terms of powertrain, with the exception of the electric version, all Grecales will use an eight-speed automatic gearbox from ZF, which is then mated to either a 2.0-litre mild-hybrid petrol with 296bhp, as driven here, or a detuned version of the 621bhp Nettuno 3.0-litre V6 built by Maserati in Modena and currently serving amidships in the MC20. All Grecales also will use four-wheel drive: the very same Q4 set-up employed by Alfa Romeo. It can split torque 50:50 between the axles, but Maserati’s engineers say that in certain drive modes and for certain models – for a Grecale Trofeo, perhaps – torque can go solely to the rear axle and can remain there even as the car goes beyond the tyres’ limits of grip and traction. All very 'dynamic'.

Heading out onto Balocco’s Langhe track – at 5km long, a proper adventure, and designed to emulate the twisty, undulating, often poorly surfaced and today greasy roads of the Piedmontese region after which it’s named – the Grecale feels familiar. Anybody who’s driven Alfa Romeo’s Stelvio will recognise the nice blend of cornering balance and agility, and the manner in which the car doesn’t try to eradicate body roll, Porsche Macan style, but almost to allow it, for better sense of flow. The steering, which is a little synthetic but reassuringly weighted and well geared, also suits Maserati’s GT car intentions with the Grecale. And you quickly learn to take lock off earlier than expected because of the conspicuously rear-led manner in which the car powers out of corners. Again, all encouraging things.

The general sense of familiarity is because the Giorgio platform that makes both the Alfa Romeo Giulia and Stelvio such satisfying driver’s options in their classes also serves this new Maserati. The Grecale has wider tracks than the Stelvio, predominantly so its maker can claim best-in-class interior space, and the car’s staggered wheel and tyre package is different (sizes from 19in to 21in will be offered, and our car wears the 20in option), but fundamentally it's the same base. Even the Stelvio’s suspension geometry has been mostly copied, with the only real adjustments existing to accommodate mode-selectable, three-chamber air suspension units, which are substantial and need careful guiding through the front axle’s double wishbones. 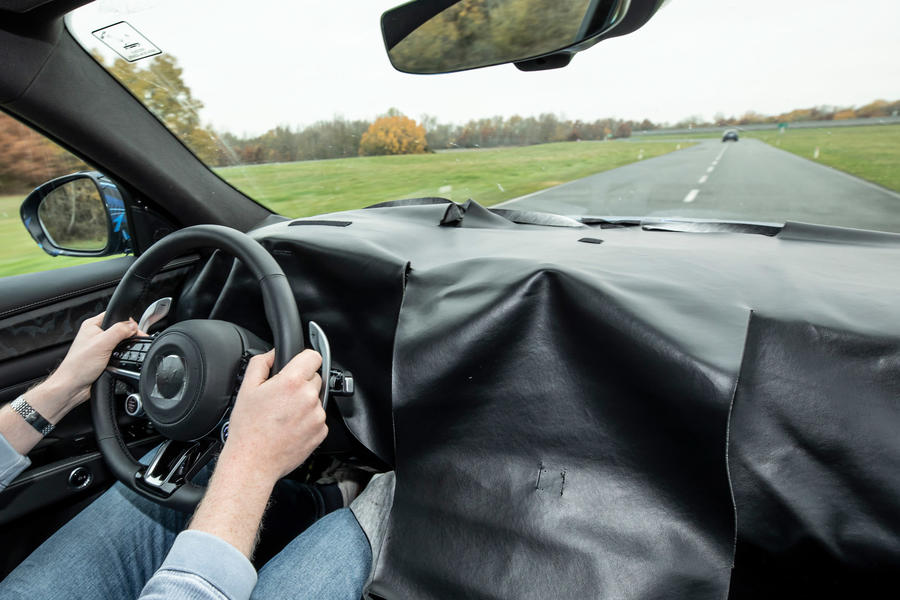 The Grecale will also be available with traditional coil spring suspension, with either active or passive dampers, although given the pliancy with which our car moves at both low and high speeds, I’d expect the top-rung set-up to be popular, and on this evidence, ride quality will be right at the sharp end of the class. The Grecale seems to have a rather lovely long-wave gait, and is unflustered by rougher surfaces, which along with interior quality is where the Stelvio comes up slightly short. Interestingly, alongside its air suspension, the Maserati also uses hydraulic suspension bushes, where its cousin makes do with rubber ones.

What’s also interesting is to try Maserati’s proprietary VDCM chassis brain. It keeps the Grecale on your chosen cornering line by first trimming the engine’s torque output if the system thinks understeer is brewing, but then also by selectively nipping individual brakes, if necessary. It means you can corner with the accelerator welded to the floor and the system only releases torque as your steering opens up and the tyres can actually use it. Keen drivers won’t necessarily appreciate such a synthetic process, but the way the VDCM keeps progress neat and quick despite very heavy-handed driving is genuinely slick, and it ought to give more casual owners the satisfaction of feeling they’re really working the car.

The exhaust tuning will play into that. Maserati regards a fruity soundtrack as something of a brand hallmark, and with the car in Sport mode (there’s a Ferrari-style manettino dial on the steering wheel), this strong and flexible 2.0-litre unit makes a more characterful din than any mild-hybrid four-cylinder deserves to. It’s not fake, either, as you'll discover if you lower the window, then tug the almost comically large aluminium gearshift paddle, and then floor it. 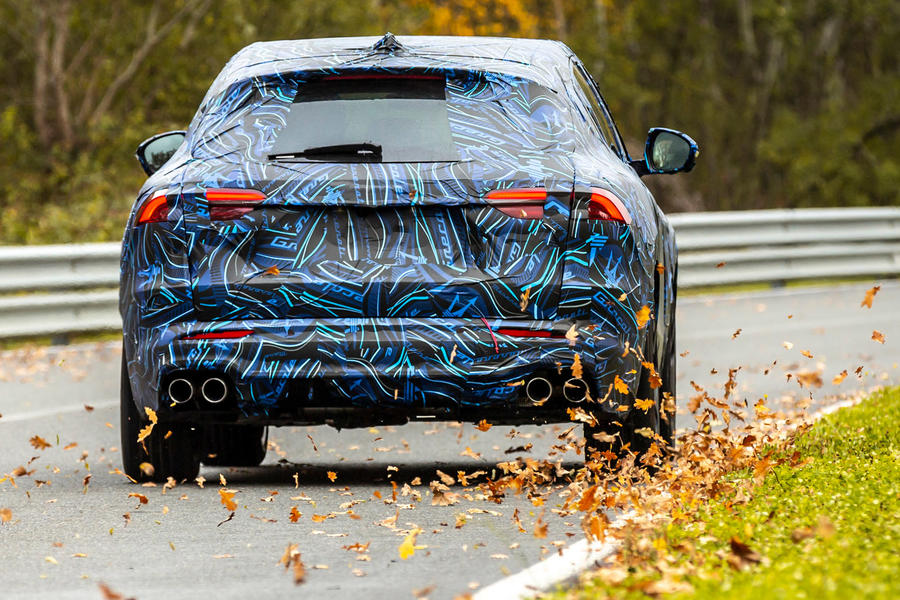 Childish impulses aside, on this evidence, the most accomplished mainstream Maserati for many years will be an SUV.

That’s not the most romantic sentiment, but the fact is that the company responsible for the Birdcage is now an SUV company: by 2025, the Grecale and Levante are expected to account for three-quarters of sales. At least, being less stony-faced than an Audi SQ5 or Porsche Macan, and more refined over distance than an Alfa Stelvio, the Grecale seems on track to be quite an accomplished and desirable example of its type.

I don't care much about the greatness of any Maserai design and character, as long as I am not sure that I start a drive and return without any problem. This is your challenge, stellantis

Hi Andrew – we'll always take the earliest opportunity to try any new car, and sometimes that means driving prototypes (though we never give a hard verdict on these as they're not finished, hence no star-rating). It's not a new thing, and in this case the alternative would be to wait until June to try the full production-spec Grecale, which we'll also do when the time comes (with star-rating). Thanks, R

Just Saying 22 November 2021
Thanks for the explanation to Andrew's post Richard.
TBH just wait till June.
IMO the sneak preview only dilutes the wow factor on release day. You may be doing more harm than good in terms of initial sales... Food for thought methinks.
Richard Lane 22 November 2021

The purpose of the story is to serve the reader, though, not the sales dept. at Maserati. If the car's obviously no good, or underwhelming, don't you think a prospective buyer would much rather know sooner than later?

Just Saying 22 November 2021
With respect Richard, no I don't.
Any potential buyer will wish to see the interior, surely. Not least the finished exterior.
Autocar serves the reader extremely well and 99% of the articles are well researched and informative.
I stick to my earlier comment.
jonboy4969 23 November 2021

With respect, seriously you actually said that, "The purpose of the story is to serve the reader, though, not the sales dept. at Maserati. If the car's obviously no good, or underwhelming, don't you think a prospective buyer would much rather know sooner than later?"Umm, it is a pre-pro it will have issues and you comment that you do not give it a star rating, well no one actually takes any notice of those anyway, they read what you put and if you say it has a shocking drive, they will remember that, and not buy because you said it, when the car is still being made, and NO, no wants to be told a car is rubbish and why a brand would allow it is beyond me, to then be told a car is not good, when it is not even finsihed WILL HURT SALES, like snidey comments about a previous models road test, you are not road testing that car, you have done that, this is something else, you totally contradict yourself, and makes the comments in the report and yours, at odds, so what is the reader actually supposed to think....I for one, and MANY other readers will actually wait for the real car to come out, before decisions are made, on whether we like it or not, and not based on something we cant see properly, or a car that is currently still in the prototype stage....I assume the next car you will get will be the new "whatever" just a chsasis and seat, with an engine up front, and you will review that.....

If interior is low rent and expected FIAT reliabity, how many meatheads would by these hotcakes?

Trident Badge. Crossover Vehicle. Hybrid for tax benefits. A lot of meatheads will buy these.

You really need to move on from your dated and heavily biased and misinformed stereotypes. The Fiat 500 came only second to the Yaris in its class for reliability a few years ago in a UK survey, and the Panda and Doblos are known as sturdy workhorses. I had an Abarth 500 that was quite dependable, leagues ahead of the Mini Cooper that preceded it.

If interior is low rent and expected FIAT reliabity, how many meatheads would by these hotcakes?