The latest member of BMW’s rapidly expanding performance line-up, which just so happens to be a mid-sized SUV rather than a saloon, coupé or convertible.

This, the first X3 to ever receive the full M division treatment, gets the adjustable all-wheel-drive system last seen in the M5 super-saloon and an all-new straight-six engine that is also destined for the next-generation M3 in 2020.

If the ‘B58’ motor powering the X3 M40i can be considered M-lite, the M Competition’s ‘S58’ engine is very much the real deal. It’s a near-ground-up redesign, with a forged crankshaft, twin monoscroll turbochargers, indirect intercooler and lightweight cylinder head helping produce a peak 503bhp and 443lb ft - more power and torque than any six-pot yet unleashed by M division.

Having already experienced the X3 M Competition and its slightly sleeker, slightly pricier X4 M Competition sibling on road and track in New York, we’ve now introduced one to British roads for the first time. 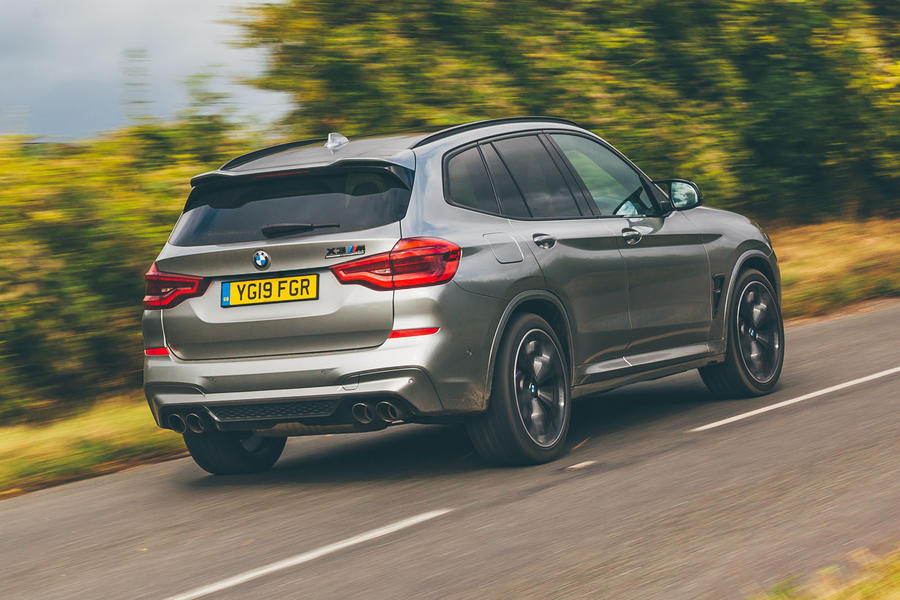 Heroically quick, as you’d expect given its substantial power output. The six-cylinder engine note may be less evocative than an AMG V8 or Alfa Romeo’s twin-turbo V6, even with the exhausts set to their loudest, but there’s no denying what the X3 lacks in aural charm it makes up for with startling pace.

More impressive is that power is delivered in such a linear fashion. The twin-turbocharged S58 does an uncanny impression of a naturally aspirated motor, with none of the mid-range shove exhibited by its rivals and usable power right the way through the rev range.

The four-wheel-drive system that was so configurable in the M5 isn’t quite so adjustable here, with no pure rear-wheel-drive mode, but sending power to all four corners lets you hustle the near-two-tonne SUV to 62mph in little over four seconds.

Handling is as precise as you’d expect from a car wearing an M badge, with the kind of grip and body control that lets you drive with real conviction. Steering feels direct at all speeds, and while not as engaging on the limit as the rear-biased Stelvio, it delivers a feeling of agility unexpected of a machine this size and weight.

This level of involvement does come at the cost of everyday ride quality, though, with the adaptively damped suspension delivering a somewhat brittle ride that doesn’t translate brilliantly to UK roads. The X3 rides well over larger bumps and undulations, even in its sportier modes, but high-frequency vibrations transfer easily into the cabin. It is far from the worst in the class for suspension set-ups better suited to a race track than the road, but when even stretches of A-road Tarmac that could feasibly be called ‘good’ feel coarse, the ride might grate when experienced every day.

Set to its most aggressive mode, the eight-speed Steptronic automatic gearbox can rapid-fire between cogs the instant you pull the wheel-mounted paddles. Combined with the rev counter that appears on the head-up display in the racier driving modes, you’re practically encouraged to eke out the entire range between pulls.

Bright red mode buttons flank each paddle for convenient switching between two M Sport driving modes, which can be individually customised should you want to mix the most aggressive throttle response with a more forgiving suspension setting. However, M Sport additions to the steering wheel and centre console aside, there’s little inside the cabin to distinguish the Competition from a vanilla X3.

The quilted seats are sculpted to keep you in place through the corners, but more enveloping over long distances than the Alfa Romeo Stelvio’s carbonfibre-backed buckets. The fully digital dashboard and the latest version of BMW’s iDrive infotainment does challenge for class honours, even if the dials aren’t quite as customisable as Audi’s virtual cockpit set-up. 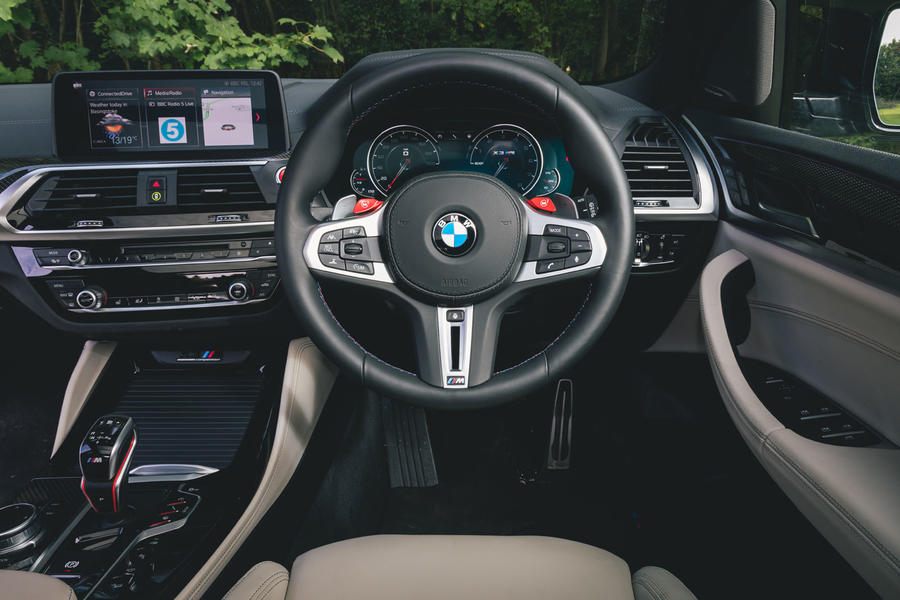 Many likely will, given the growing popularity of performance SUVs, but it is a niche that’s filled with more flamboyant rivals. The X3, by comparison, feels a little sterile.

It certainly isn’t left wanting for pace, but ride and handling exist in a middle ground between the dynamism of Alfa’s Stelvio Quadrifoglio and the everyday refinement of Jaguar’s F-Pace SVR. The soundtrack is also no match for a GLC 63’s snarling V8.

If there can be such a thing as a true driver’s SUV, this is surely it, and those who get behind the wheel will find it delivers an experience that’s largely free from compromise – albeit one that doesn’t entertain in quite the same way as the competition. 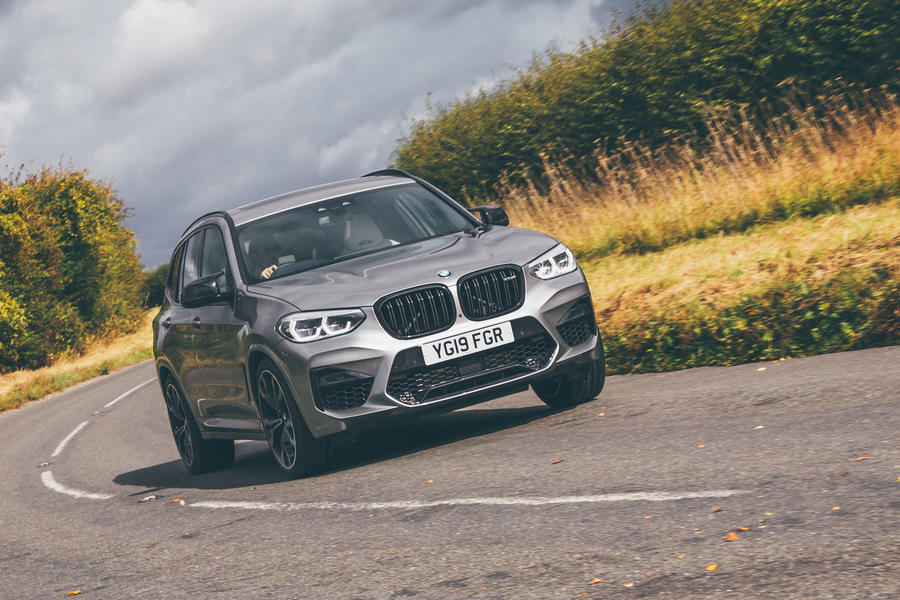 I was about to say at least

I was about to say at least it has proper dials.  But then I see they are fake ones.

I think all cars should now be judged against alternative of walking.  Walking certainly wins here.

completely love this SUV but

completely love this SUV but the way this thing drives is astoundingly and almost annoyingly like a really stiff sports car.

Price has nothing to do with it, if your looking for performance in a relatively small package this car fits the bill,and, if your looking at this type of vehicle then you'll have looked at the other brands,and if your coming in at this price level then you can afford the asking price, and ultimately, if you like it inside and out and it performs (like it won't!) to your liking, then who cares what others say?, same old mantra here...your money, your choice......

Price has nothing to do with it, if your looking for performance in a relatively small package this car fits the bill,and, if your looking at this type of vehicle then you'll have looked at the other brands,and if your coming in at this price level then you can afford the asking price, and ultimately, if you like it inside and out and it performs (like it won't!) to your liking, then who cares what others say?, same old mantra here...your money, your choice......

Peter,  just because someone can afford to pay for it does not mean it's good value or worth the money.  Otherwise everything is worth the money with that criteria.....