BACK TO ALL NEWS
Currently reading: First drive: GKN Jeep Renegade eAWD BEV prototype
UP NEXT
Handling by Lotus: revisiting the Kia Elan in 2021

More a showcase than a production vehicle, the Renegade eAWD BEV is an example of how a major parts supplier claims to be able to help car makers achieve full or, in other circumstances, partial, electrification of their existing models without breaking the bank. It’s an attractive concept at a time when most manufacturers are struggling to turn a profit on their electric cars.

GKN, the supplier in question, has replaced much of the Jeep Renegade’s standard hardware, including the engine, with its latest generation of standardised, off-the-shelf, power and transmission systems featuring all-wheel drive and, on the front wheels, torque vectoring. The combined power output of the vehicle’s two electric motors is 261bhp, split evenly front and back.

The power source, a two-piece battery pack made by GKN and combining 14kWh and 24kWk capacities to give a total of 38kWh, is distributed in the vehicle floor. The two, axle-mounted power and drive systems are of the so-called 2-in-1 variety; that is, they each combine an electric motor and transmission, also made by GKN. The power inverter is mounted separately. Higher outputs, as well as 3-in-1 systems combining the inverter, are also available off-the-shelf for other applications. In the case of the Renegade, the front-mounted electric motor is of the permanent magnet type, a technology preferred by most car makers for its efficiency, while the rear is an induction motor.

The car’s front-mounted eTwinster is a development of GKN’s existing system that uses clutches to control the flow of torque to each front wheel independently of the other for a safer but also more engaging – read fun – driving experience. The technology has already been seen in models including the Range Rover Evoque and Ford Focus RS but in this latest form it’s combined with an electric motor and a two-speed automatic transmission, a development of the gearbox first seen in the BMW i8. 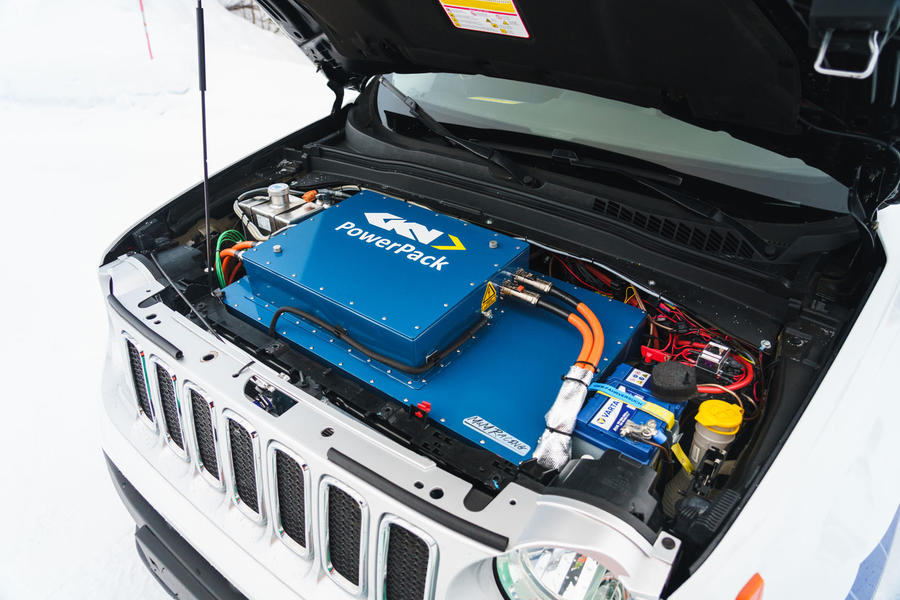 GKN claims the adoption of two speeds gives a better balance of acceleration and top speed than is possible with a single-speed system. It also keeps the electric motor operating at its sweet spot to help extend driving range. All that said, single-speed transmissions are forecast to be the dominant solution for EVs and indeed, the Renegade’s rear-mounted transmission is just such a unit.

One of the eTwinster’s most impressive features is the way the motor torque can be very finely controlled. Torque recovered when braking or coasting can also be directed to the front wheels to boost control.

The Renegade’s rear-mounted transmission features an open differential, so that torque is split 50:50 between each wheel and no individual control is possible. The rear-mounted power and transmission pack is similar to the one used in the Renegade plug-in hybrid due on sale later this year.

We drove the Renegade eAWD BEV at GKN’s winter testing centre at Arjeplog in Sweden. The little Jeep scampered around the frozen handling track and high-speed circuit and without the benefit of ESP, which had been disabled when the car’s internal combustion engine was removed. It was equipped with three driving modes including Standard, that tended towards understeer, and full-on Sport. In between was GKN, a halfway house between the two extremes. 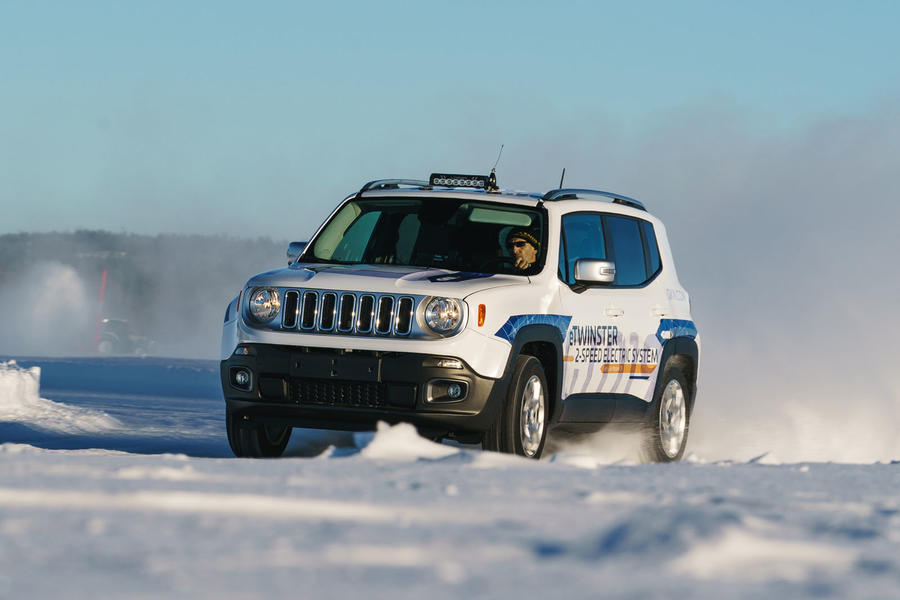 The Renegade’s energy recovery felt reasonably strong and was a boon on the high-speed circuit when, in Standard mode and on compacted snow, lifting off the throttle sent recovered energy to the front wheels, the eTwinster system balancing the car and catching the nose before it turned in. The managed distribution of torque to each wheel was apparent through the steering wheel, imparting a welcome sense of security and control, although traction control was also in play, preventing the rear wheels spinning.

The system was just as effective on sheet ice when once again, lifting off the throttle in a tight turn sent a stream of regen to the front wheels, stabilising the car. Changing to all-wheel drive increased acceleration marginally on the ice and snow with the possibility of additional energy recuperation at the rear helping to keep the car stable as the throttle was lifted.

Changing from Standard to Sport mode introduced more oversteer, the eTwinster system shuffling additional torque to the Renegade’s outside wheel. Meanwhile, at the rear wheels, the traction control was automatically wound off a touch, letting the back wheels slip a little and allowing the car to pivot around slightly, in the process raising the fun level by a factor of 10.

As a split-axle hybrid with no hard connection between front and rear wheels, the electronic coordination between the two power and transmission systems was impressive, while the electric motors were discreet but powerful. 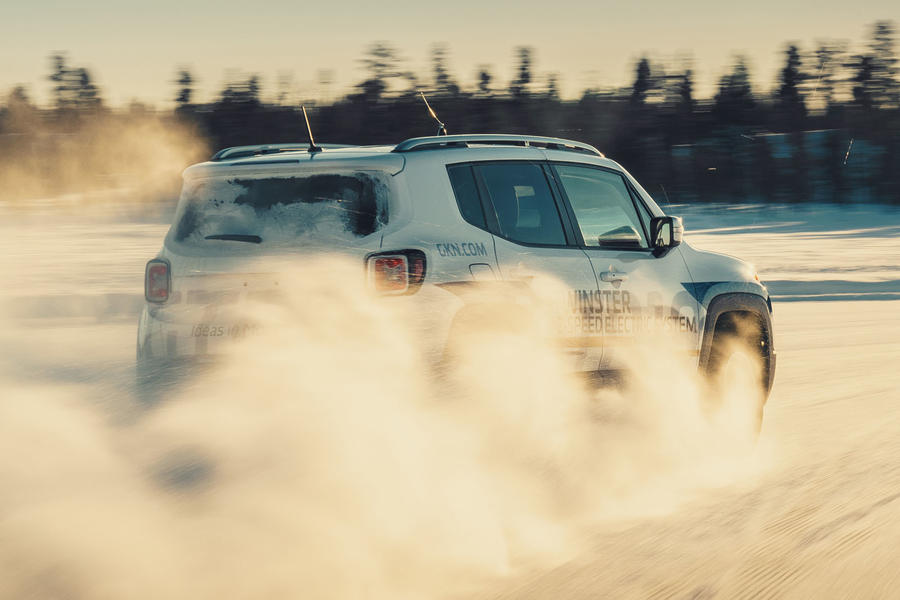 Although you can’t buy the Renegade eAWD BEV, much of its technology is scheduled to appear in at least six hybrids and EVs due to be released this year, including the forthcoming Renegade PHEV.

That said, for the time being, car makers’ focus is squarely on containing EV costs through standardisation and satisfying the majority of drivers’ demands for safe and predictable handling. Sportier appetites may have to wait but on the evidence of the Renegade’s agile and responsive eTwinster system, their patience will be amply rewarded.

Moving (on) mountains: Driving a Jeep Gladiator in New Zealand​

From what i understand, the

From what i understand, the efficency gain is minimal at "normal" speed (up to 70-80 mph). This is because of the inherent efficiency of EVs and the penalty you pay for introducing a gearbox (friction and weight)
Einarbb 24 February 2020

Have wondered why electric cars don't have multiple gears

as the efficiency logic also appears to apply, i.e. have the motor operating at slower rate - as electric motors also have friction and heat losses.

I'm interested to see just how affordable this tech will be and if will create a market for people who can't afford a brand new BEV (especially when governments extend the ban on the sale of ICE vehicles to the used market) and if the choice exists choose to have their existing ICE car converted to an EV? Will the government offer grants to offset the expense? This approach could be taken to remove the high levels of waste that could be caused by buyers abandoning their petrols and diesels as they become obsolete.