Prices have been cut across the range, with the range-topping 2.0-litre Cross model taking a £1400 drop. An increase of £120 has been applied to bottom-rung Pop trim, however.

In addition, the higher-spec Lounge and Cross Plus trim levels have been pruned from the line-up, leaving Pop, Pop Star, Mirror and Cross.

Apple CarPlay and Android Auto smartphone mirroring are now standard across the board, while the 5.0in infotainment touchscreen has been upgraded to a 7.0in unit.

Explaining the cuts, a Fiat spokesman said: “The 2018 500X range includes greater connectivity as standard. Pricing and trim levels across the range have been streamlined to simplify the offering for customers.”

Last year's sales drop was unexpected for Fiat; the 500X is the only SUV in the brand's line-up in the midst of an SUV market boom, while the 500 continues to sell strongly despite a mild Europe-wide decline in the city car market.

It's also likely that the 500X range has been trimmed to accommodate the upcoming WLTP fuel economy and emissions testing procedure, under which every spec of a model must be separately tested.

Seat Leon X-Perience axed in UK due to low demand 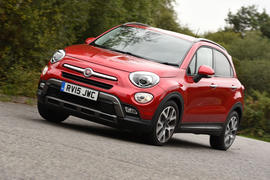 The worst model name for a grown up family car ever, "Pop Star". The shame!

I was talking to a Fiat

I was talking to a Fiat dealer when the 500X was introduced and he said they were struggling to sell them as "people didn't expect to pay that much for a Fiat". Maybe this realignment will sort that out. I thought I'd read recently that sales of the 500 were slowing too, but maybe thats at a slower rate than the (apparent) decline in the city car market.

I wonder if there is an internal conflict within Fiat about competing with Jeep suv’s?

My wife sat in one last November in the showroom and showed sufficient interest that would have once had car sales types excitedly hunting for test drive keys. Not this time, we had to pry the salesman away from his desk. When we did he knew so little about the car and was so passive about a potential test drive we left and read the reviews (which quickly killed off any 500x thoughts).

If that’s how deals are done these days they’re doomed!

Even if I wanted to buy one I would be so insulted to have to pay extra for a paint job, let alone not have anything nice apart from the metallic blue to choose from, I would be gone in a flash! The same goes for the 500L too.

All the creativity and marketing in Fiat is poured in to the 500/500c (dozen or more paint colours, inspirational trim choices), so if anyone in Fiat HQ is surprised by the lack of sales they need to wake up and start "smelling what they is peddling" !!!

Che cazzo fate Marchionne !!! ... you can do better, and you should.

"Fiat 500X sales dive" - Not surprising because using the 500 retro template on an enitrely different type of car is doomed to failure. Even Mini has to reduce the number of its pointless varients.

Never understood why the both the 500L & 500X were given the 500 applicaton,the revived 500 is a small funky car while the two ugly sisters  are certainly not that. Compared to the ot Renegade the 500X is not an attractive proposition. Perhaps it's time to review the list prices again which are too high and take a look at the trim levels as well

Are you sure you can't rent 500's anymore? see them all the time on holiday rental sites

.... it could be worse fiat could have cars called roomster or superb

I think there are far worse names around now than those - and at least there is historical significance with Superb, relating back to one of Skoda's early saloons in the 1930s