BACK TO ALL NEWS
Currently reading: Ferrari 488 Pista prototype first drive
UP NEXT
Official: Ford Bronco 4x4 coming to Europe in 2023

Ferrari wants to make the ultimate track-focused road-going supercar. Could the 488 Pista be it? We find out
Open gallery
Close

The name says it all and aptly describes what this hardcore variant of the Ferrari 488 is all about.

‘Pista’ is the Italian word for ‘track’ and it’s on a track that the Ferrari 488 Pista has been developed to feel most at home.

And it doesn’t get more at home than Ferrari’s very own Pista di Fiorano in Maranello, which is where I’m spending an afternoon finding out how sharp a track tool the 488 Pista really is. 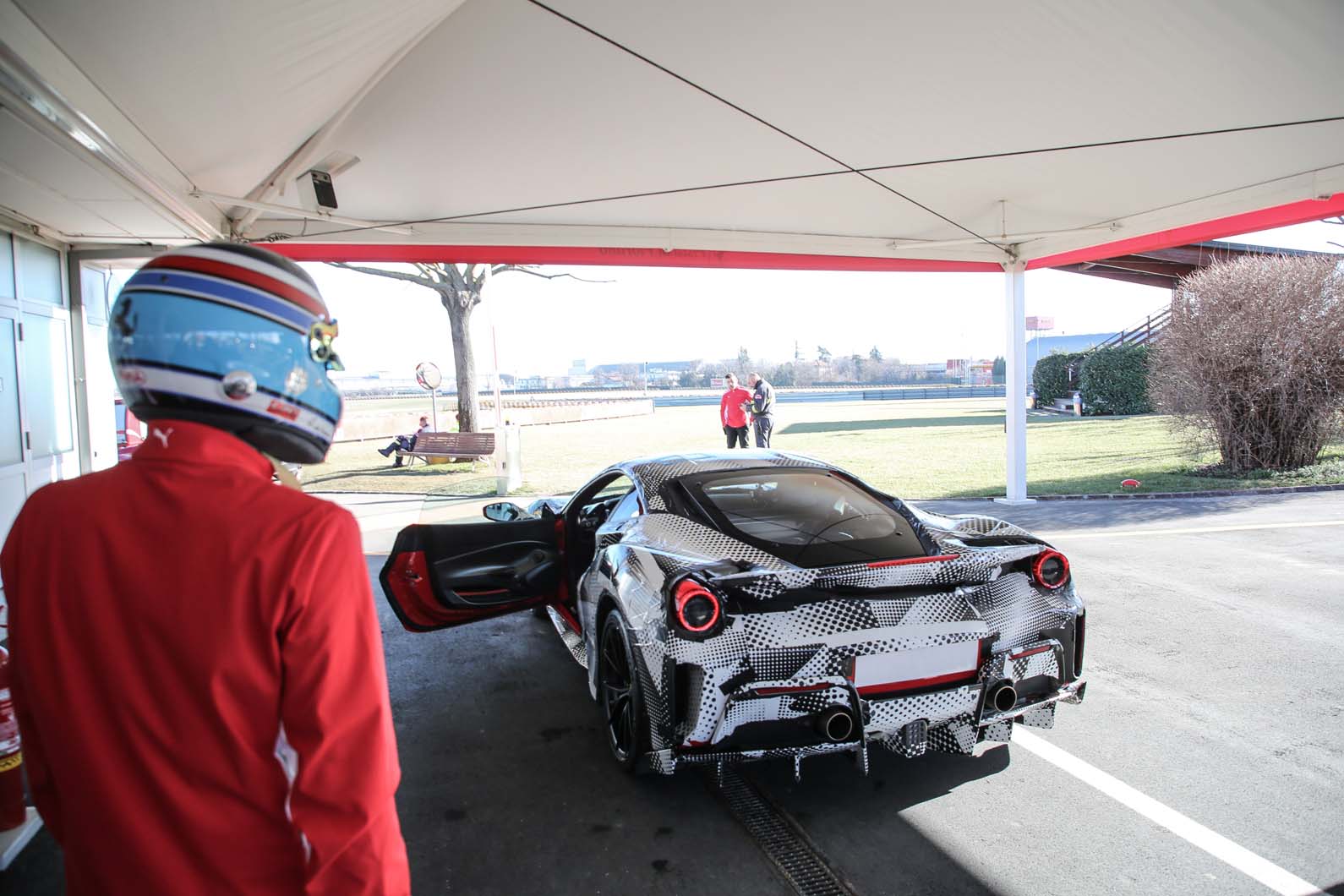 The Pista follows in the footsteps of its illustrious V8-powered predecessors, such as the 458 Speciale, 430 Scuderia and 360 Stradale, all developed and honed (at Fiorano) to be the finest driving machines of their day. The Pista, no doubt, has big shoes to fill and Ferrari isn’t holding back.

For starters, the Pista gets the most powerful V8 yet made by the Italian marque. The upgraded twin-turbocharged engine displaces the same 3902cc as the standard 488’s but it has undergone a raft of software and hardware changes that include a remapped ECU, a higher compression ratio (9.6:1), new pistons and higher-lift camshafts.

This shoves peak power up to a colossal 711bhp, a hefty increase over the 661bhp of the standard 488 GTB. Torque, too, is up by 7lb ft to 568lb ft but the headline figure is the power-to-weight ratio of 513bhp per tonne, a massive improvement over the 488 GTB and its 448bhp per tonne. 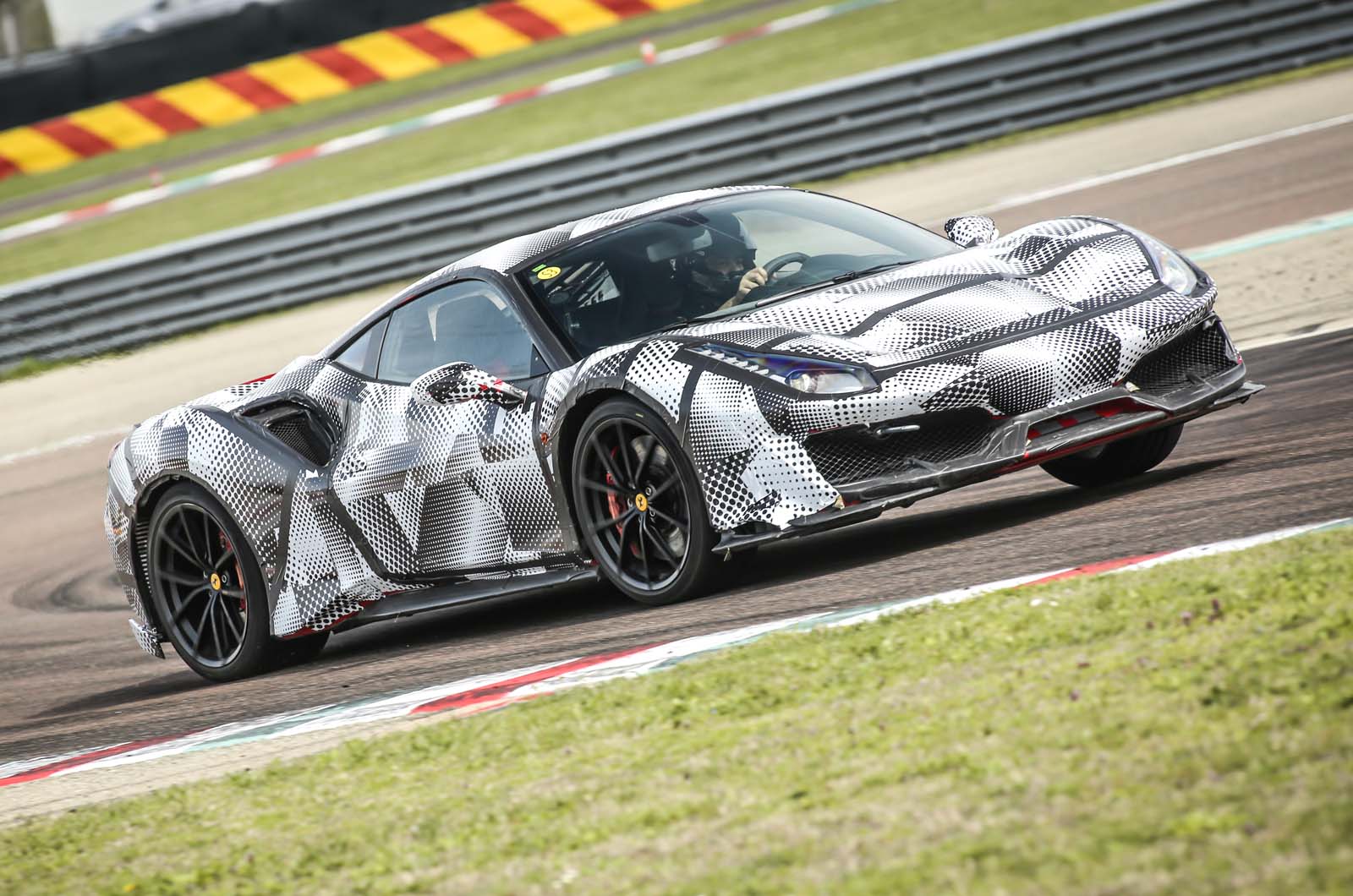 Up on power and down on weight like all the Ferrari track specials before it, the Pista is 90kg lighter than the 488 GTB, which in no small way contributes to a remarkable set of performance figures. Ferrari claims a 0-62mph time of 2.8sec and an even more impressive 0-124mph time of 7.6sec. That’s quick by any supercar standard and puts the Pista squarely up against its biggest rival: the McLaren 720S.

The Pista I’ve been handed is a pre-production prototype. It’s the reason it still wears camouflage, although I can’t understand why, especially since the car was unveiled to the world at the Geneva motor show in early March. Ferrari says these prototypes are 90% ready for production and all that’s left for the final engineering sign-off, before sales start in June, are a few minor tweaks to the engine calibration.

The interior is similar to the 488 GTB’s but with more Alcantara, leather and carbonfibre, although we’re not allowed to show you that in production form here, either. 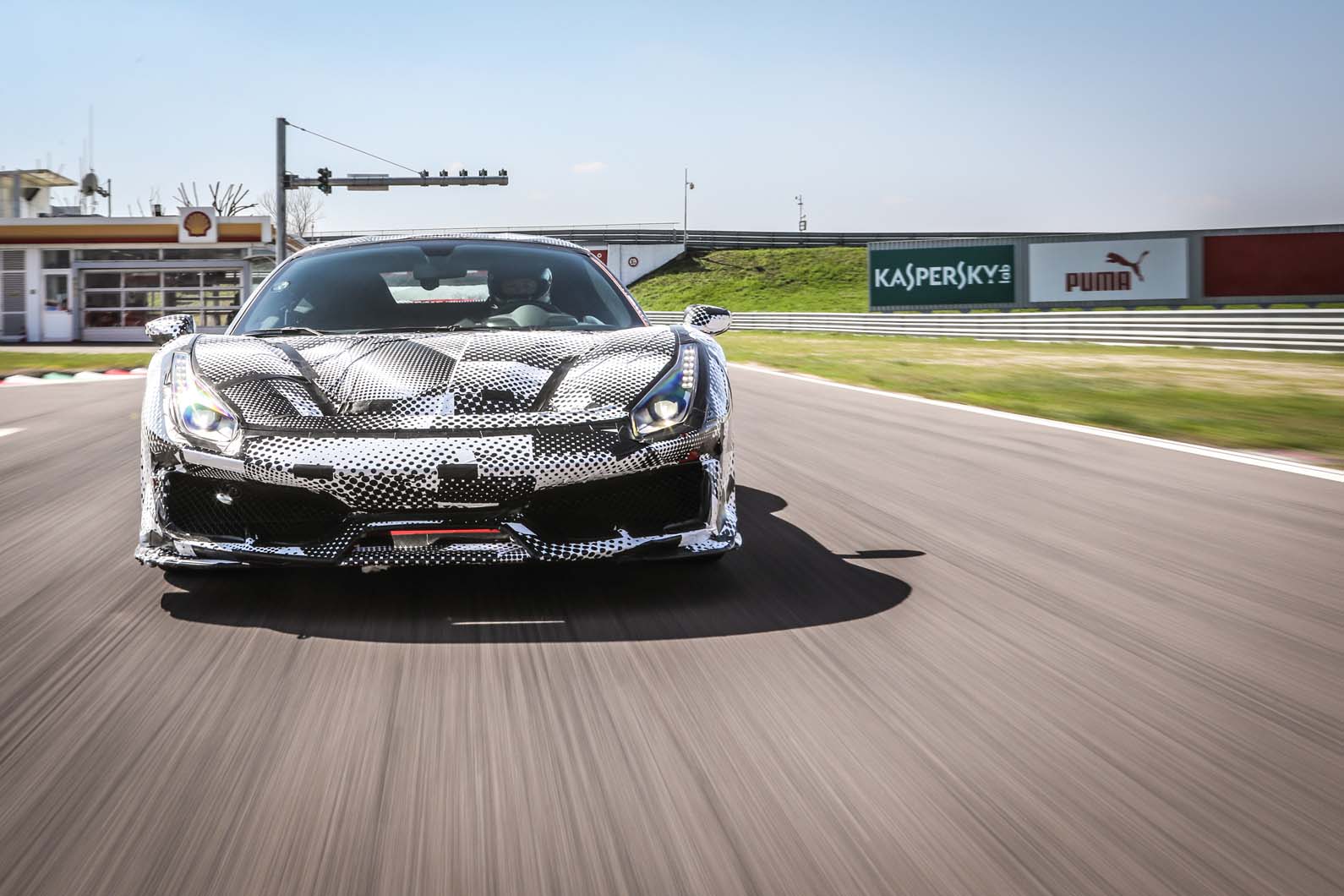 It’s a pity the prototype disguise doesn’t allow us to see the Pista in all its beauty. The distinguishing fat stripe that runs from nose to tail is covered but you can’t miss the changes to the bodywork, which show the affect of additional wind tunnel work.

As well as those sophisticated aerodynamics, the Pista borrows several weight-saving measures from its 488 Challenge and 488 GTE racing siblings. The lightweight lithium battery has been carried over from the 488 Challenge as well as new 20in carbonfibre wheels, the first on a road-legal Ferrari.

However, Ferrari hasn’t embraced ultra-light carbonfibre construction whole-heartedly like McLaren and continues to use aluminium (better suited to higher production volumes) for even lightweight specials like the Pista. But to keep the weight down, there are quite a few carbonfibre panels, such as the front and rear bumpers, engine cover and rear spoiler. It may not be the lightest of track-oriented supercars but the Pista has lost weight where it counts and the unsprung mass is lower. 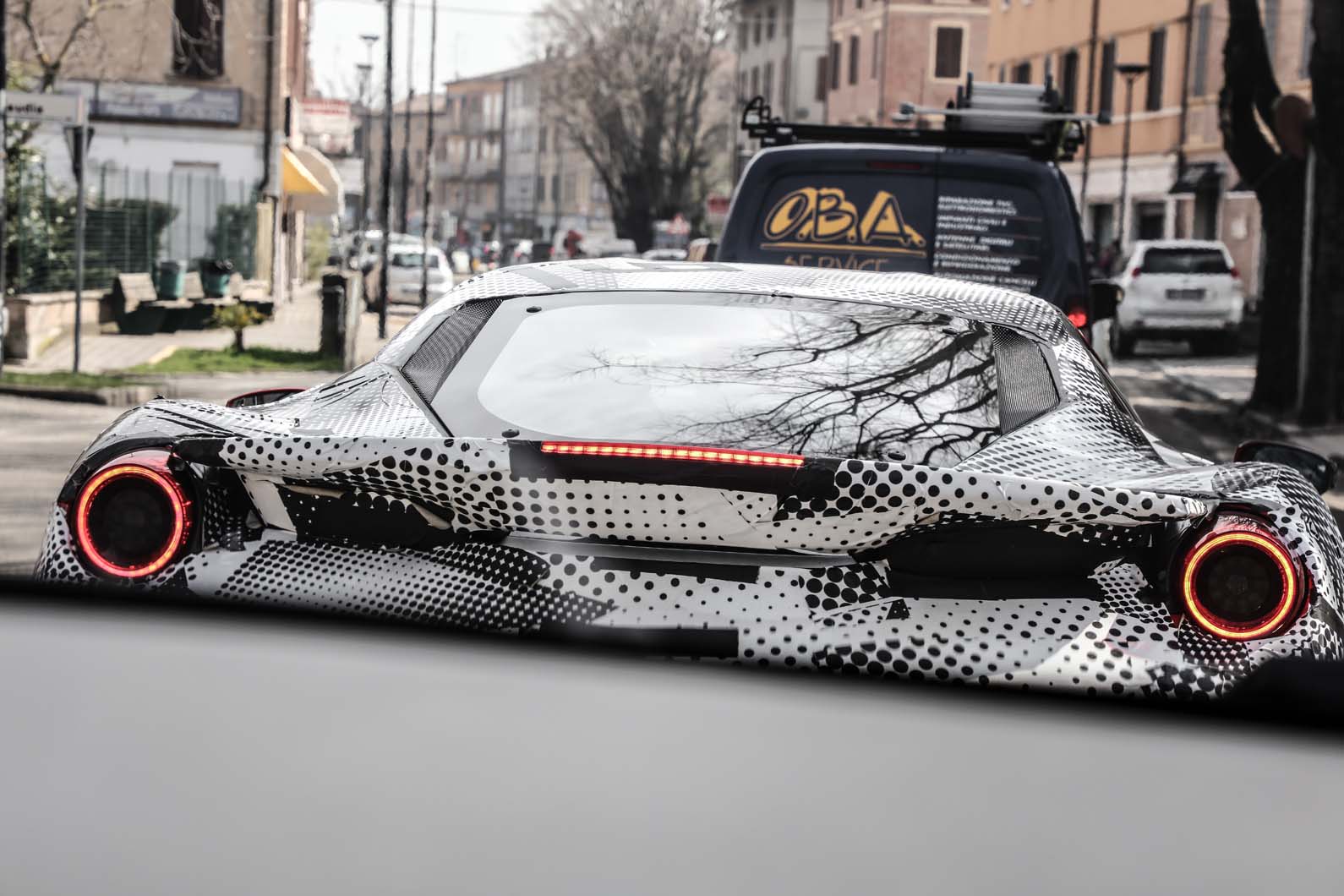 Lightening the engine not only contributes to the lower kerb weight of the car but also influences how the motor itself performs. Unsurprisingly, lightweight components from the 488 Challenge have made their way into the Pista’s V8 as well. Titanium con-rods and a lighter flywheel and crankshaft have cut the inertia of these rotating parts by 17% to make the motor even more responsive and faster-revving. There’s also an all-new exhaust system with longer and wider runners, made of Inconel alloy with a 1mm wall thickness. Again, this helps to reduce weight but it also affects the engine sound.

And what a sound it is. The engine note is much louder and has a sharper edge to it than the 488 GTB’s. Open the throttle and the throaty growl at low revs turns into an ear-splitting roar as the V8 catapults to the redline.

The engine is 8dB louder than before but Ferrari has worked on improving the sound quality as well. “We’ve focused on enhancing engine sound at higher frequencies,” says Vittorio Dini, head of powertrain at Ferrari.

The increased intensity of the engine sound has undoubtedly added to the Pista’s appeal but I still miss the soulful, high-pitched scream that made the 458’s naturally aspirated V8 motor so special, especially when it neared the 9000rpm rev limit. The limitations of forced induction don’t allow the Pista’s V8 to rev as high and it has the same 8000rpm ceiling as the 488 GTB. 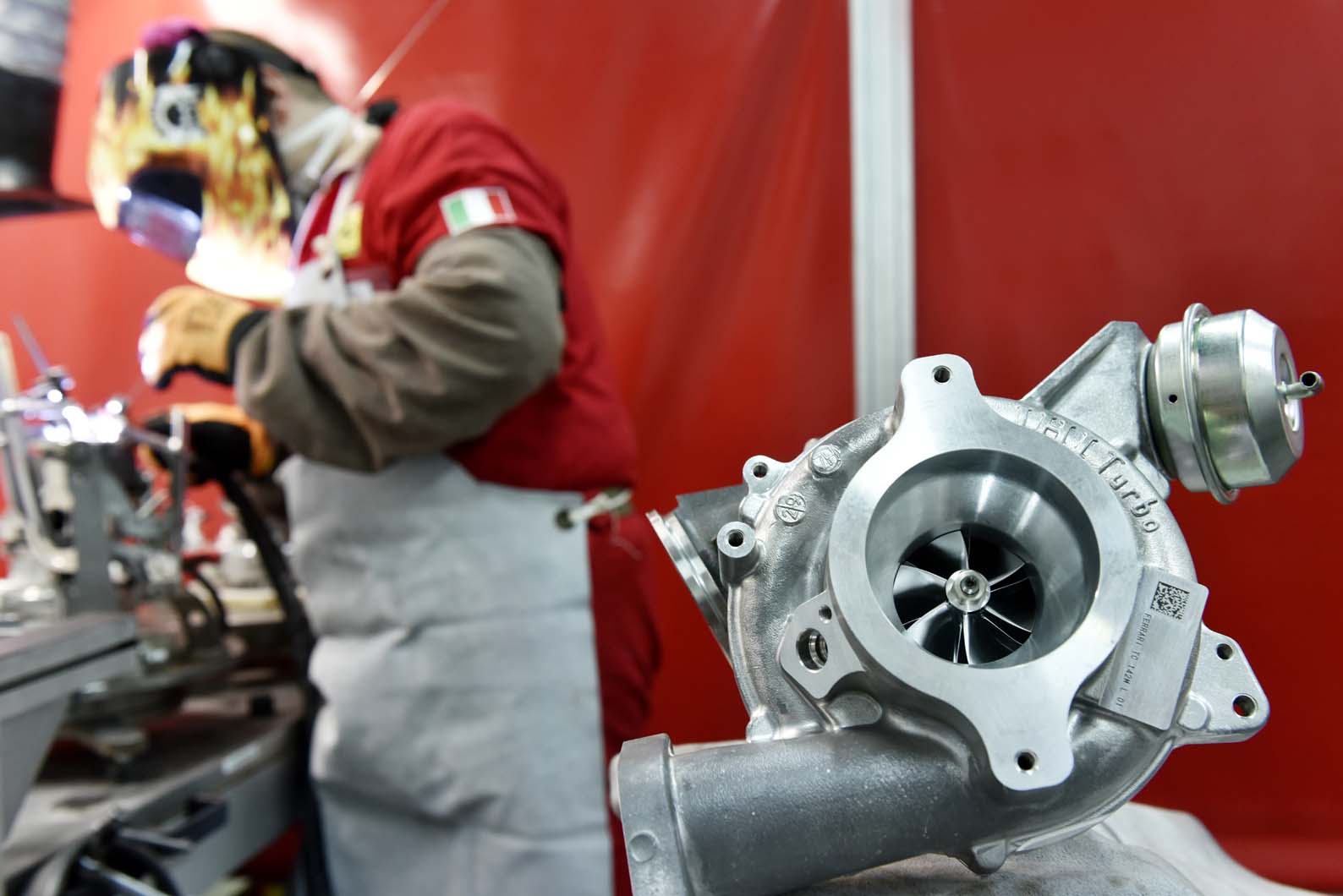 The gearing is also unchanged. Typically, a more powerful and lighter car can accommodate taller ratios. However, Dini says: “We didn’t want to compromise the car’s response in any way by making the gearing taller.”

‘Response’ is a word that gets redefined when you drive the Pista. Off the line, it leaps forward with the tiniest flex of your right ankle and you can control the progressive throttle with millimetric precision. By artificially reducing torque in the lower gears and unleashing the full 568lb ft in seventh gear only, power is delivered with the linearity of a naturally aspirated engine. Turbo lag? If there was a whiff of it in the GTB, it has been completely snuffed out in the Pista.

Acceleration is simply brutal and it took me half a lap of Fiorano to adjust to the ferocity of the power.

It feels noticeably quicker than the GTB, especially in the mid-range, where the torque hits you like a sledgehammer. The engine revs so fast and freely that the shift lights on the steering wheel are constantly illuminated. In manual mode, the sudden rush of power and revs keeps slamming you against the 8000rpm cut-off. If only this engine had another 1000rpm to play with. But to make every last rev count, Ferrari has given the Pista a ‘wall’ limiter that is set to abruptly cut power at exactly 8000rpm and not progressively reduce it as you near the redline. 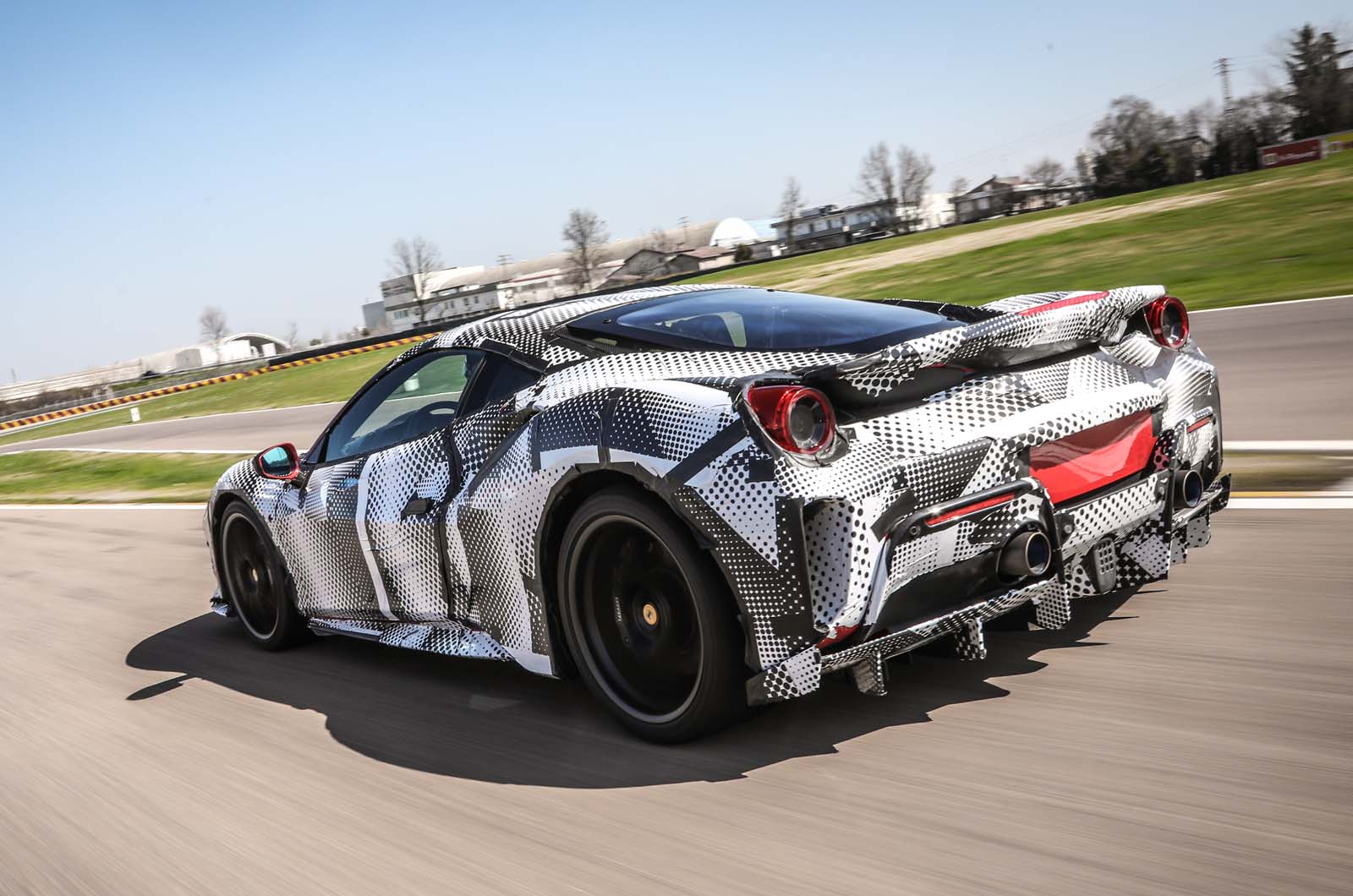 Handling? It’s at another level altogether. The Pista takes the flawless dynamics of the 488 GTB and enhances it with more grip and agility. The steering is very quick, especially off-centre, and super-accurate, which allows you to explore the brilliantly balanced chassis.

In slow corners, there’s a wee bit of feel-safe understeer dialled in but overall the Pista feels remarkably neutral. It can be deftly balanced on the throttle even in the relatively restrictive Sport mode. Turn the manettino to CT-OFF and you’re in ‘hero’ mode, where the latest version of Ferrari’s Slide Slip Control (SSC) lets you get impressively sideways but has a built-in safety net to keep you on the right side of the scenery.

New Michelin Sport Cup 2 tyres, developed specifically for the Pista, merit a mention too. Apart from the terrific grip they offer, it’s the compliance of the tyres that surprised me on a brief drive in the Italian countryside, outside Fiorano. 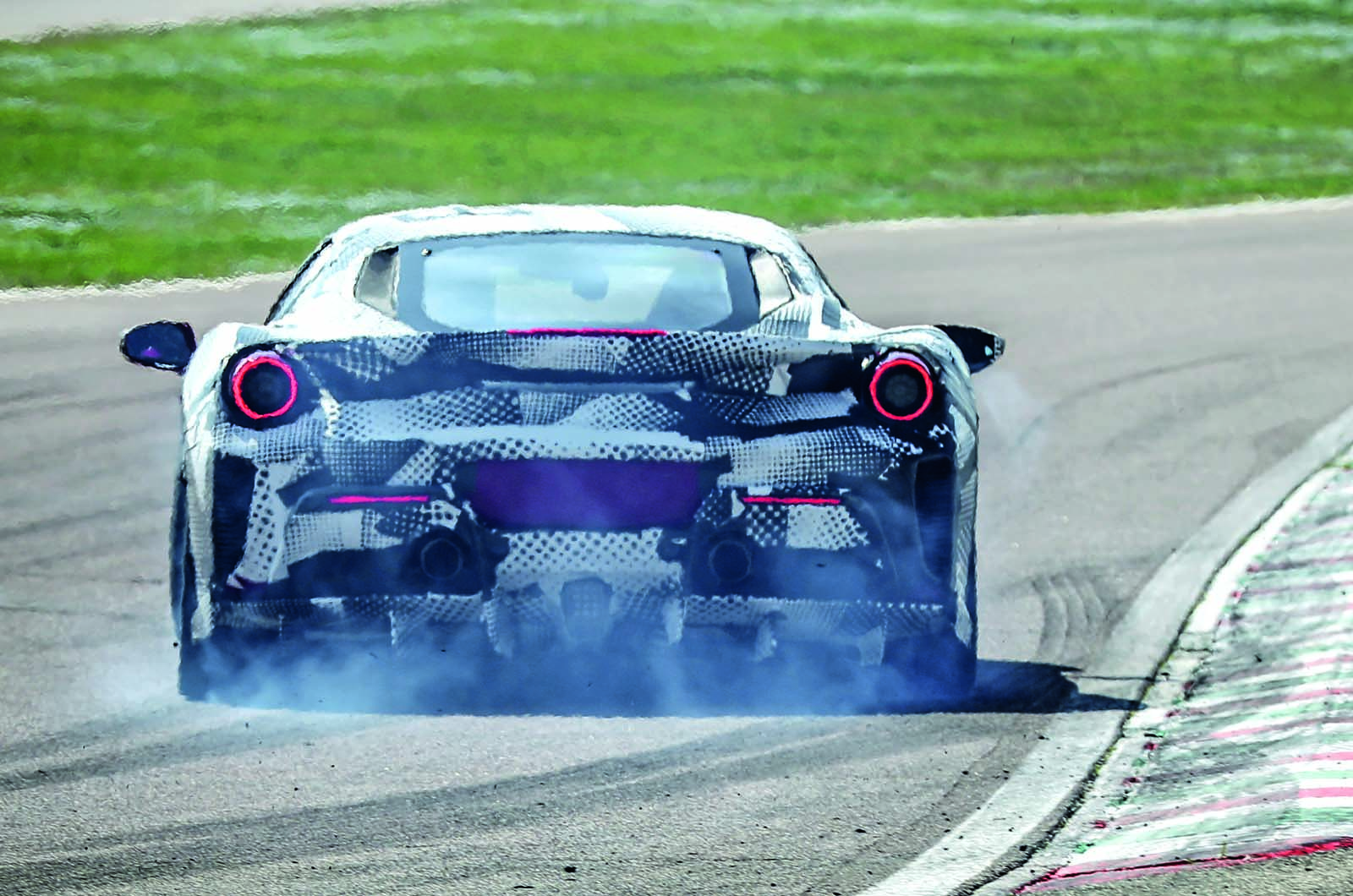 A tyre’s sidewalls are the first line of defence over sharp edges and ruts, and I was amazed at how well the Michelins, with their rubber-band-thin profile, coped with some of the poorly paved surfaces. In fact, the short loop around Maranello also showed how user-friendly the Pista is. The ride is firm but not brittle and the gearshifts are nicely smoothed out in auto mode.

With every one of its track editions, Ferrari has raised the bar and set a new benchmark for supercars. The Pista is set to follow that tradition.

Sticking to tradition, the 488 Pista draws heavily from Ferrari’s motorsport experience and uses lots of aerodynamic ideas from the 488 Challenge and 488 GTE race cars. Ferrari claims a 20% improvement in aerodynamic efficiency over the 488 GTB thanks to a plethora of vortex generators, redesigned ducts, diffusers and spoilers that finely control the airflow across every millimetre of the Pista.

The most noticeable aero change is at the front, where the scooped-out bonnet houses the Formula 1-inspired S-duct. It is so called because the air passing through the intake on the nose is routed through an S-shaped aerodynamic duct before it exits via a big vent on the bonnet. The whole idea behind routing air through the curved S-duct is to accelerate airflow, which creates a low-pressure area under the bonnet. This, in turn, generates increased downforce over the front axle. 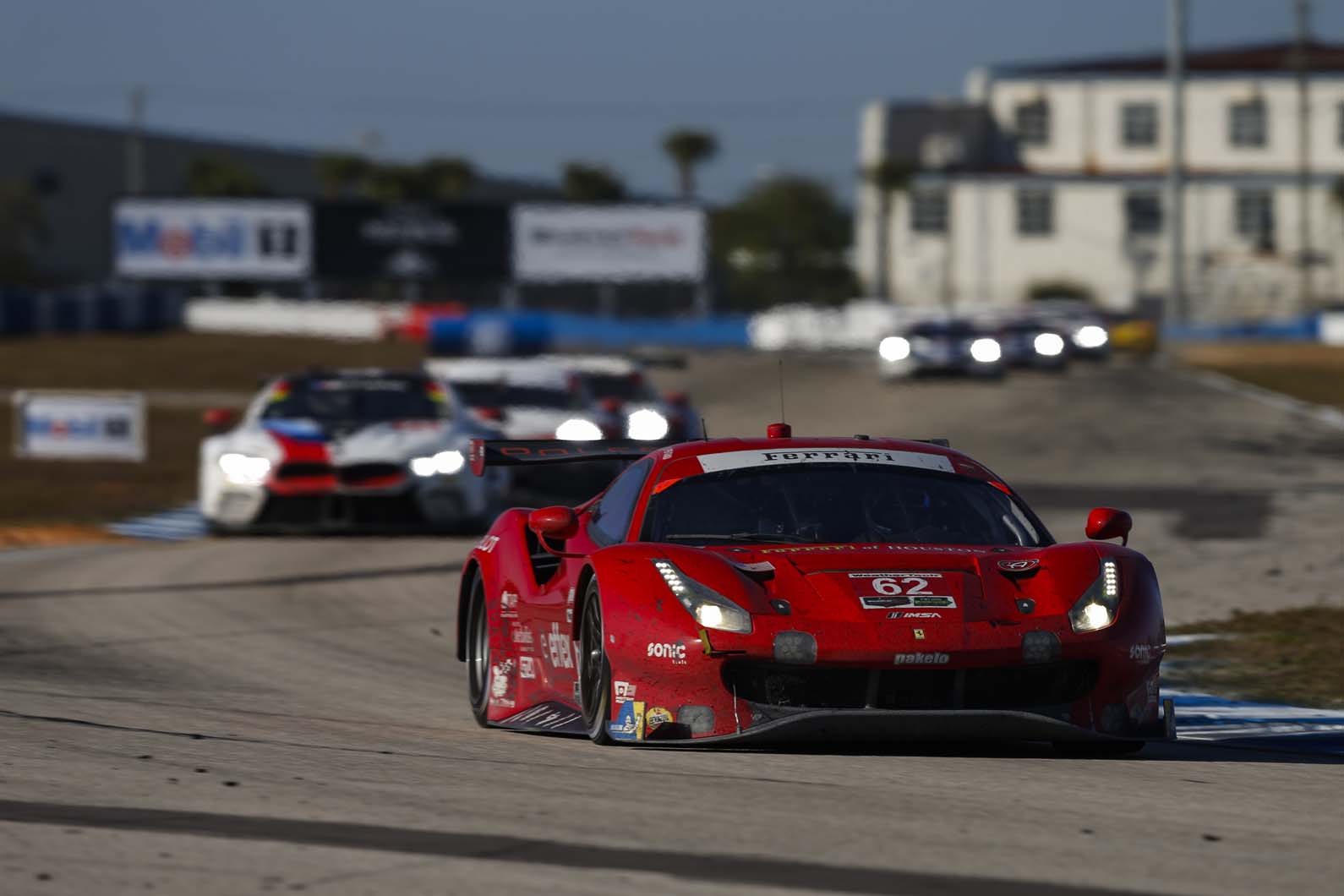 Other notable aero features include bigger scoops in the front bumper to deflect airflow outwards ahead of the front wheels (again, for better downforce) and, at the back, the ‘blown’ spoiler (30mm higher and40mm longer than the standard 488 GTB’s) is more effective and keeps the rear axle buttoned down.

The redesigned side ducts are a particularly clever piece of aero engineering. On the 488 GTB, the air flowing through these ducts is split between the engine air intake and the intercooler. But on the Pista, the air intakes have been moved to the rear spoiler area, where the airflow to the engine is cleaner. This frees up the side intakes (there’s no visible splitter now) to feed air to only the larger intercoolers. This ‘win-win’ innovation, which makes the engine breathe more readily and cools the intercooler to lower the intake charge temperature by a considerable 15deg C, contributes to the overall increase in power. 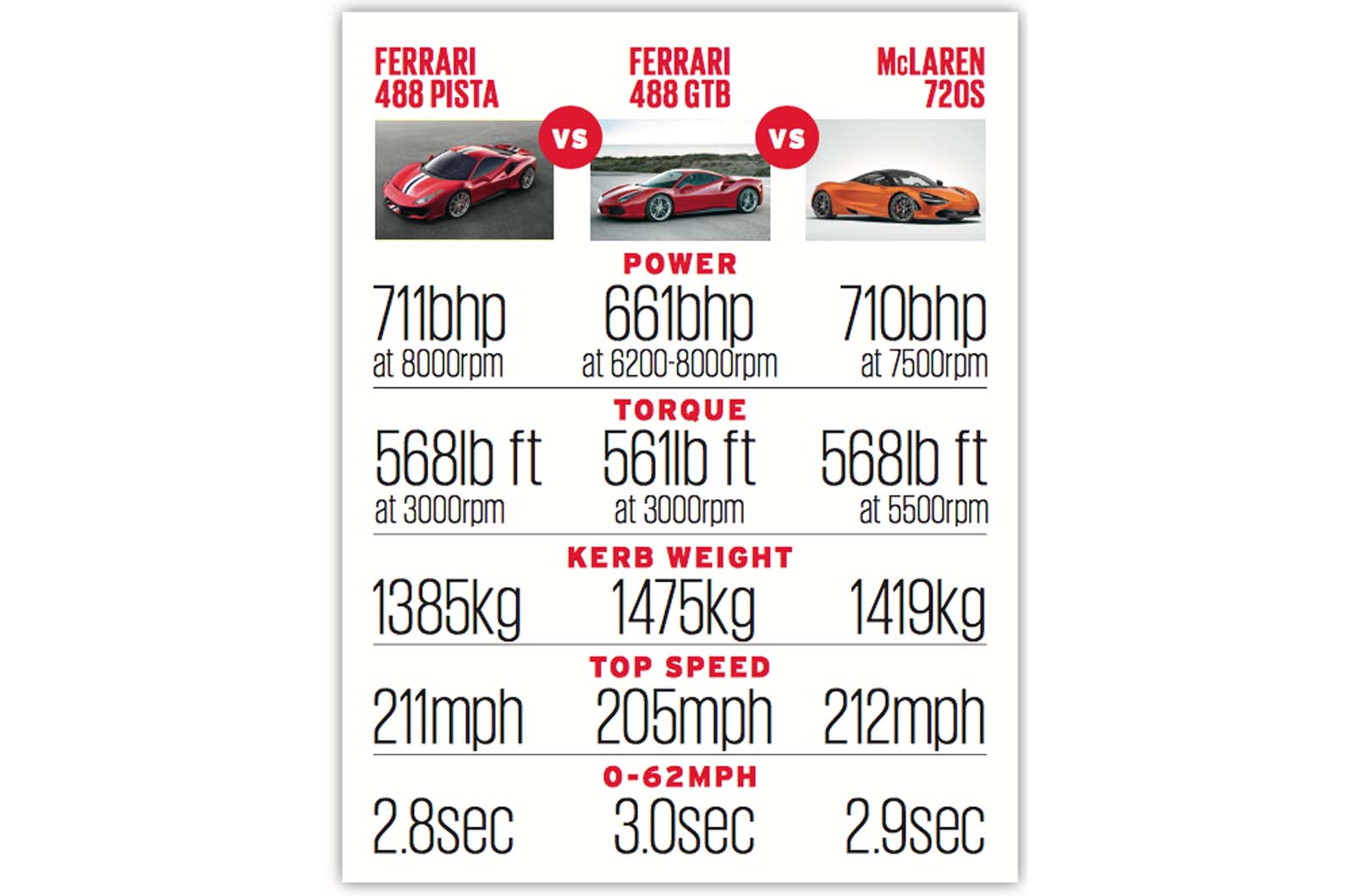 Viewed from the back, the 488 Pista looks like the GTE, purposefully sporting the same ‘double-kink’ diffusers as the World Endurance Championship racer. The underbody ‘vortex generators’ have also been optimised to enable 20% more downforce. In fact, all the new aero trickery has resulted in a substantial 20% increase in downforce for just a 3% penalty in drag.

Surely the "ultimate track-focussed road-going supercar" will prove to be the Senna and not the 720S, the 720S being a road car not a track-focussed car at all.

The 720s may be faster than

The 720s may be faster than the 488 but it's not necessarily a better or more fun car, it also costs the better part of 20k than the Italian. So I'm tired of the chattering classes bringing up this old chestnut again.

The Pista is a road car that's more suited for the track - just like the Speciale. I don't care if any variant of the 720s will be faster. The Pista is brilliant and that's all that matters.

A 458 would be a nicer road car. And despite the babyish pretensions, this is a road car.
View all comments (5)