BACK TO ALL NEWS
Currently reading: Faraday Future FF91: driving the car that nearly didn't happen
UP NEXT
Rodin FZero: V10 weapon aims to be world's fastest car

With moving prototypes of Faraday Future's first production model at CES 2020, we got behind the wheel to see if the troubled brand stands a chance of success
Open gallery
Close

Company CEO Carsten Breitfeld led a duo of close-to-production FF91 prototypes from Los Angeles to Las Vegas to attend CES 2020, where he mapped out the company’s future with a crucial dose of realism that escaped his predecessors.

Breitfeld, a BMW veteran who masterminded the i8 and later helped launch Byton, joined Faraday Future in 2019 to finally squeeze a profitable product out of an investment of around $2 billion (about £1.5 billion) made since Jia Yueting founded the brand in 2014. It’s make or break; even electric cars have a limited shelf life.

Breitfeld told Autocar his goal is to apply the business model pioneered by tech giants like Apple and Facebook to the automotive industry. The FF91, which was previewed by a concept unveiled at CES 2017, is a platform the company hopes to monetise by selling digital services, like infotainment upgrades. 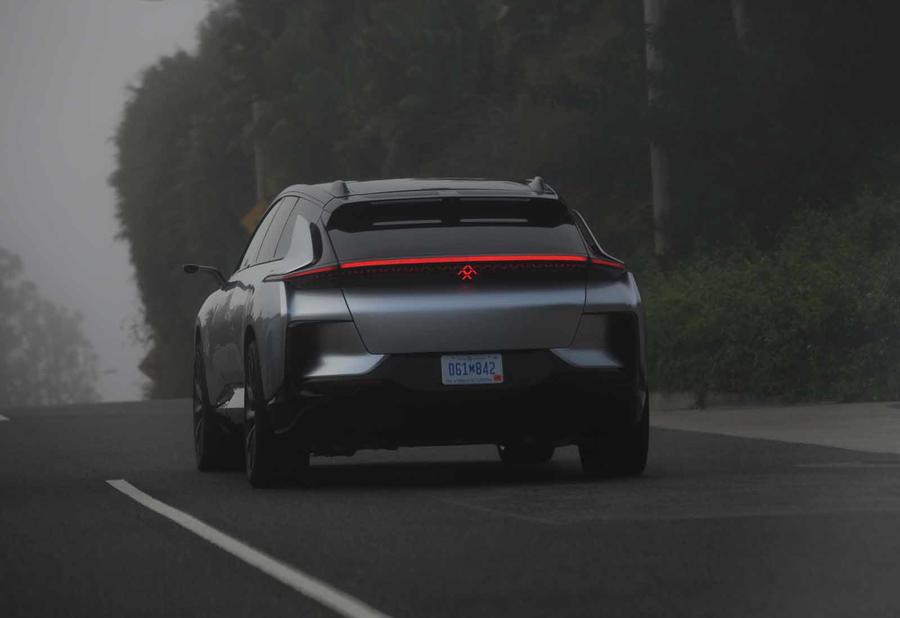 Faraday’s business plan also calls for the launch of different variants of the car, with varying levels of luxury, horsepower, and range, but all built around the same basic structure.

“We’re not positioning our car by the size of its wheelbase. Our brand’s DNA is the user experience. Whatever car we bring to the market, at any price level, it will always have by far the most spacious interior, and it will offer the greatest digital experience,” he pledged. He added any and all Faraday Future-badged cars will be electric; petrol, hybrid, and hydrogen technology aren’t on the table.

Developed in-house, the FF91’s powertrain consists of a mammoth, 130kWh lithium-ion battery pack that zaps three electric motors into motion for a total output of 1035bhp. Every part of this configuration is modular. The battery is made with individual 22kWh strings, so removing two would create an 88kWh unit, and it’s possible to power the big saloon with a single 345bhp motor.

While it’s deceptively easy for companies from all over the automotive spectrum to throw wild specs around like confetti, Breitfeld claimed the aforementioned figures aren’t hypothetical or computer-simulated. They’re the actual outputs his team locked in and achieved during real-world testing. He notably left Los Angeles with a full charge and reached Last Vegas 250 miles later with 110 miles of range left.

“You find a lot of start-ups who talk about the things they don’t have right now, and we weren’t talking about the things we had. The product is ready. You can sit in it and drive it,” he stressed as he reminisced about the company’s numerous near-death experiences. 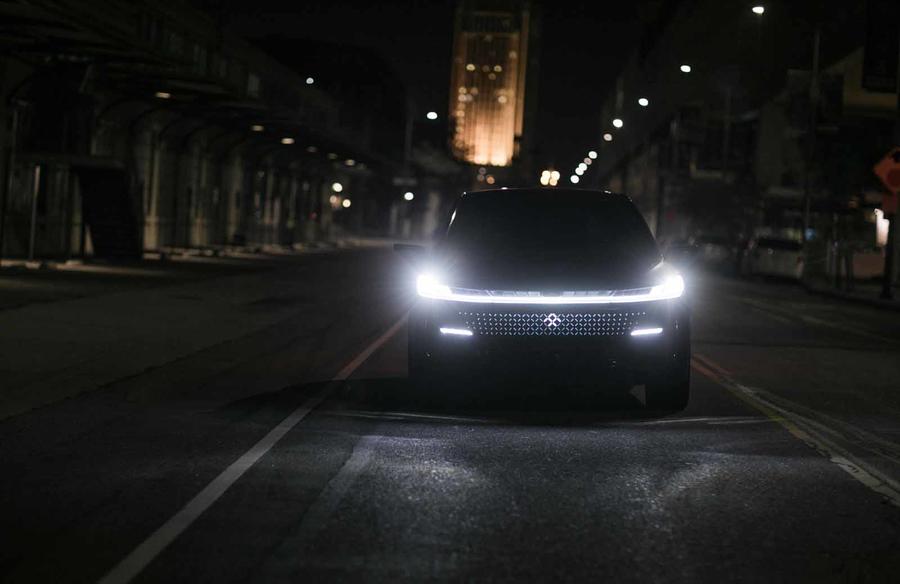 The FF91’s Area 51-friendly design attracts a tremendous amount of attention as we navigate the dense pre-CES traffic in downtown Las Vegas. We’re driving a prototype, so fit and finish aren’t on par with a production car’s, yet it’s relatively quiet and rattle-free, which bodes well for the upcoming production model. Keep in mind that, price-wise, the FF91 will be more closely aligned with a Mercedes-Benz S-Class than a Tesla Model 3. When traffic thins, the FF91 accelerates with the silky smoothness and rocket-like speed associated with high-torque electric cars.

We slow down to avoid an unsavoury encounter with Nevada law enforcement officials prowling Las Vegas streets, though the engineer riding with us affirmed the FF91 remains composed at 170mph on the German autobahn. Coming to a stop from higher speeds requires actual use of the brake pedal, but the drivetrain’s regeneration (configurable, of course) is powerful enough to allow for one-pedal driving around town.

Considering the FF91’s positioning as a smartphone on wheels of sorts, its target audience is more likely to care about the touchscreen’s size and resolution than the powertrain’s output. The software is Android-based, like Volvo and Polestar’s infotainment systems, but the interface is brand-specific, and a big part of the Faraday Future experience.

Owners will create a profile called an FFID that will store their climate control, entertainment, and navigation preferences, and automatically set them when camera-based facial recognition technology detects who is in the driver’s seat. The passengers’ preferences will also be stored and automatically set, with the obvious trade-off being that your car might end up knowing a lot more about you than some of the people you interact with daily. 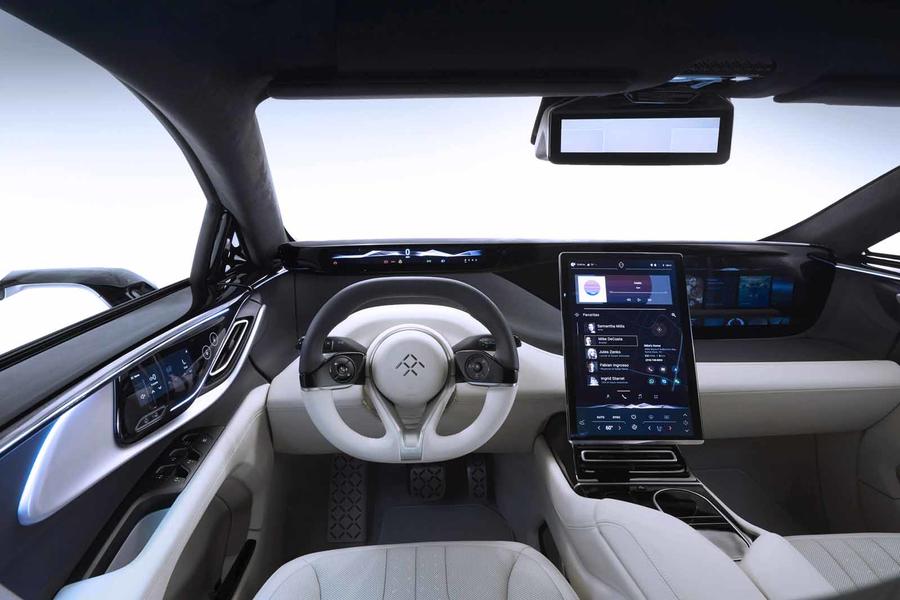 Ultimately, what stands out the most while driving the FF91 is that it’s more concept car-like than any vehicle currently available. Stylists carved out the parts of the dashboard that aren’t needed, relocated the digital instrument cluster closer to the base of the windshield, and installed a thick-rimmed oval steering wheel to create a sense of openness that’s surprising even considering the car’s relatively big footprint. Breitfeld’s claim that space is in Faraday Future’s DNA rings true. It’s a sign the company figured out what it stands for, what’s achievable, what’s important, and significantly, what’s not.

As of writing, Faraday Future is waiting for its final round of funding. Once it’s secured, it will begin building the FF91 in a factory located in Hanford, California, before the end of 2020.

The first examples will be sold on the American market, but the firm will quickly start deliveries in China, where it has amassed a growing pile of reservations, and where its second production facility will be located. It identified America and China as its key markets; Europe isn’t on its radar for the time being.

“We have no concrete plans to bring [the FF91] to Europe for now. We see the markets in Europe are not really prepared for electric and connected cars. There are some people who are interested in this, but if you look at the market potential, the number one is clearly China,” Breitfeld said. Norwegians love electric cars, he pointed out, but Norway remains a relatively tiny market.

Pricing will range between $120,000 and upwards of $200,000 (about £91,000 and £152,000, respectively), which places the FF91 against formidable opponents from big names, and Faraday Future is already looking forward to expanding its range with a pair of smaller models named FF81 and FF71, respectively.

It’s also eyeing lucrative digital services, and a shuttle service between Los Angeles and Las Vegas marketed as an alternative to flying. Ambition alone can’t keep an automaker alive, it often spawns distractions, and decades of experience taught Breitfeld to keep his priorities in the right order. "I want the team to focus now. This is our first product, and it's all about getting it out," he concluded.

All these Tesla killers are

All these Tesla killers are only killing themselves it seems...Fisker, Faraday Future, Bollinger et al will all join Dyson in the garbage heap...they need to come up with something other than just catching up with a Tesla product...

A far more interesting Tesla - if they can get a foothold in China they're laughing.

Tesla need competition,and at the moment nobody is doing it.....yet.