BACK TO ALL NEWS
Currently reading: Exclusive: McLaren to launch extreme open-cockpit speedster
UP NEXT
Tesla to expand select UK Superchargers to other electric vehicles

Limited-run hypercar, set to cost around £1.5 million, will focus on the ‘pure pleasure’ of road driving
Open gallery
Close

McLaren is developing a two-seat open-cockpit speedster that will focus on providing exhilarating on-road driving and become the sixth model in its Ultimate Series, Autocar can exclusively reveal.

According to a source aware of the car, the new limited-run machine will sit alongside the track-focused Senna and the 250mph Speedtail hyper-GT at the top of McLaren’s range. Whereas the Senna has been designed as the ultimate road-legal track car and the Speedtail developed around high-speed aerodynamic efficiency, the new speedster has reportedly been conceived for road-driving pleasure. It will apparently highlight the more emotional, fun side to McLaren – albeit while retaining the high-performance, high-tech traits for which the Woking firm is known.

The as-yet-unnamed machine will be the first pure open road car McLaren has made, with styling that will reportedly evoke open-top sports prototype racers. That will pitch it into competition with Ferrari’s recently revealed Monza SP1 and SP2 speedster models.

The speedster is claimed to offer a more ‘fluid’ interpretation of McLaren’s design language than the firm’s other models, with prominent use of flowing, elegant lines. Our source has been told the interior design will closely match that of the exterior and is set to feature low-profile dihedral ‘butterfly’ doors. 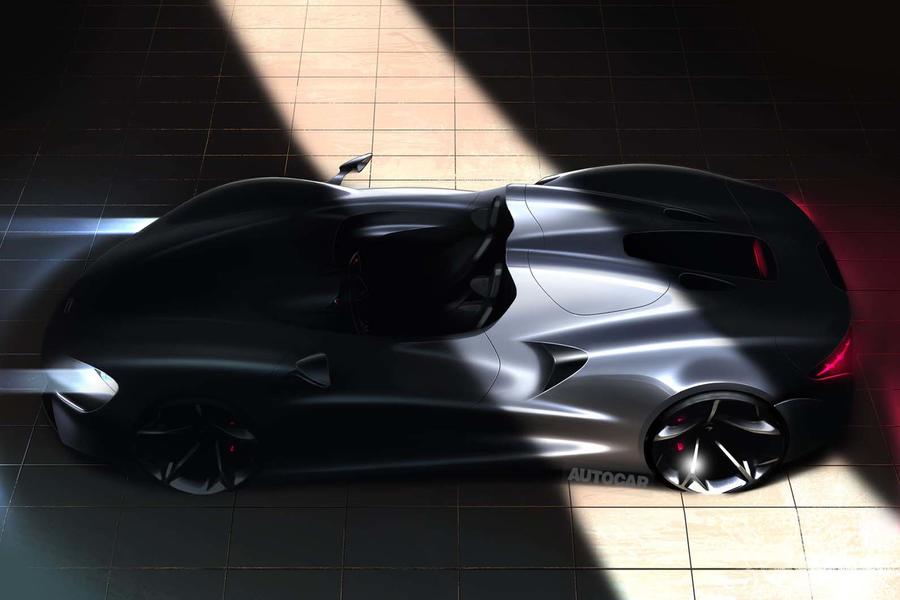 The flowing styling will contrast with the aerodynamically focused Senna and reflects the fact that the new car is being developed primarily for use on the road, with the intention to maximise the ‘pure pleasure of driving’. It is being honed to deliver extremely agile handling while giving high levels of driver response. Our source has been told that it will offer astonishing levels of feedback.

That driving experience, combined with the open cockpit, is understood to offer a greater connection between the driver and the environment around them.

Power is tipped to come from McLaren’s 4.0-litre V8 twin-turbocharged petrol engine and, unlike the 1036bhp Speedtail, won’t include any electrification or other hybrid technology. The output for the car is not yet known, although the focus on road driving pleasure suggests it will be slightly reduced from the 789bhp of the Senna. However, as part of McLaren’s Ultimate Series line-up, it is still likely to be elevated from other models in the firm’s range.

As is usual with McLaren, the power will be driven through the rear wheels only, likely through a dual-clutch automatic gearbox.

The new speedster is tipped to weigh less than the 1198kg Senna, making it one of the lightest road cars the firm has ever built. This is achieved by both the lack of a roof and, as is customary for McLaren, extensive use of carbonfibre.

The open-top machine will be a strictly limited-run model, with volume thought to be restricted to fewer than the 500 examples of the Senna that the company has produced. A price of around £1.5 million has been suggested, similar to the cost of the Monza SP1 and SP2.

A reveal or launch date for the new model has not been determined yet, although it is likely to be produced after the 106 examples of the Speedtail. Production of that machine is due to begin in late 2019, after the final examples of the Senna GTR, which would suggest cars will start to be built in late 2020 or early 2021.

McLaren models have traditionally been split into three series: Sport, Super and the range-topping Ultimate cars, although the forthcoming new grand tourer will launch a fourth. The Ultimate Series has its roots in the firm’s seminal road car, the F1, and was launched with the P1 plug-in hybrid supercar in 2013.

When asked to confirm the project, a McLaren spokesperson declined to discuss the new car, saying: “Our usual position in respect of speculation about possible future models is not to comment and that’s the case here.”

McLaren Speedtail: everything you need to know

TIME TO DO SOMETHING ABOUT THE SPAMMERS.

Come on Autocar, it's getting beyond a joke.

Yeah, I’m getting fed up with them too! As I said I’ve told Autocar, even got a reply saying thanks for the heads up, but........

Another McLaren limited-edition supercar, it must be a Wednesday...

I really do think they're going too far now with the V8 and Monocell. We'll soon be getting the McLaren panel van (fastest house moves ever!) and the McLaren Hearse (for an even more 'emotional' final lap....).

I know any supercar should be interesting but new ones are arriving at least once a week if not more. Only in the last few days we've seen a 298mph Saleen, the 2000bhp Lotus, the 'reborn' Ecurrie Ecosse' XJR-13, some Austro Daimler 1200bhp hybrid, a 'new' Alvis, the new mid-engined Corvette, the Jannerally Design-1 (not made up) and this McLaren.

Goodness only knows what delights the rest of the week will bring...

the new speedster has reportedly been conceived for road-driving

This made me laugh

"It will apparently highlight the more emotional, fun side to McLaren"

Like a Rich Tea biscuit dunked in a cup of tea.

This piece is written like the first tease from their marketing department.  Aurtocar have a source and then the official person at the end saying we cannot confirm... it's the same bloke isn't it. the one asked to leak the first titbit to a willing press?

It would have been more fun to hear :-

"Well it uses the same old V8 and gearbox, but we have changed the exterior shape again to sell more cars,  it's a bit like the Toyota Aygo where you can change the body panels and make it look different, though of course those are reliable."