BACK TO ALL NEWS
Currently reading: New McLaren GT is firm's most practical, refined model yet
UP NEXT
Oxfordshire firm reveals 371bhp Porsche 964 911 restomod

New McLaren GT is firm's most practical, refined model yet

The new McLaren GT, on display at the Goodwood Festival of Speed, will “redefine the rules of Grand Touring”, according to the firm.

The new model is so distinct from McLaren’s existing line-up of Sports, Super and Ultimate Series models that the Woking brand has positioned it in its own category. It’s said to revive the spirit of “traditional Grand Touring - long distance driving in comfort, at higher speeds and with room for luggage”.

However, McLaren also claims that it is lighter, faster and more engaging than any existing products in the GT segment.

Measuring 4.68m long and 2.09m wide, the GT is McLaren’s largest model on sale (excluding the sold-out Speedtail), and targets everything from the Aston Martin DB11 to the Bentley Continental GT. McLaren claims that, at 1530kg, it’s more than 130kg lighter than its “closest core competitor”.

Much of this is thanks to the McLaren’s carbon fibre monocoque, dubbed ‘MonoCell II-T’ in the GT as it incorporates a new rear upper stucture. This allows for the most luggage space of any McLaren to date: a 420-litre space below a soft-close rear tailgate combines with a further 150-litres of storage at the front - a best-in-class combined capacity. The firm claims it has enough load length to carry two pairs of 185cm skis.

As well as offering segment-leading space, McLaren has optimised the design for long-distance comfort. The strong carbon structure means that the C-pillars are glazed and rear quarter windows feature, improving visibility and cabin ambience. It still retains the trademark dihedral doors, however.

The interior combines McLaren’s focused, minimalist approach with a raft of new luxury touches. Seats unique to the GT, both electrically adjustable and heated, are said to offer the perfect balance between support and long-distance comfort. A new, faster and more advanced infotainment system features, with the latest HERE navigation software and heating and ventilation controls now incorporated into the touchscreen. Further features include hidden ambient lighting, a Bowers and Wilkins sounds system and the option of a new electrochromic roof panel that can darken and light up at the press of a button. Cashmere upholstery will even be offered later this year; a production car first. 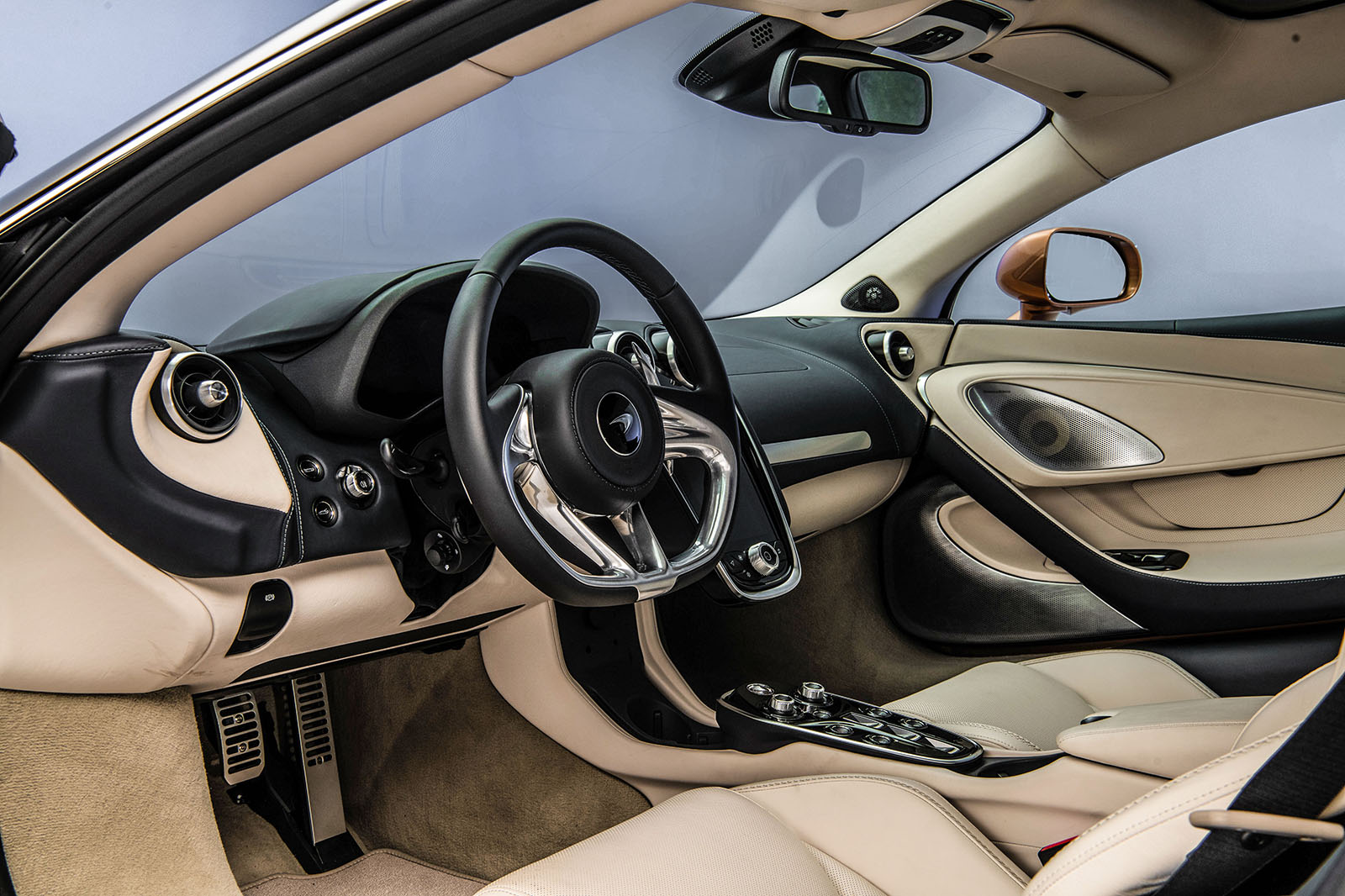 McLaren’s familiar 4.0-litre twin-turbocharged V8 powers the GT, offering 612bhp, 465lb ft of torque and a power-to-weight ratio of just under 400bhp-per-tonne - the least of any McLaren on sale. 0-60mph still comes up in 3.1secs, however, while 0-124mph takes nine seconds and it will hit 203mph flat-out.

A vital part of the GT's appeal is said to be its balance of traditional McLaren dynamic prowess with newfound levels of comfort and refinement. Work to reduce vibations and noise from the stiff structure, including softer engine mounts and increased sound insulation, ensure McLaren can claim it as the most refined model it's ever built.

The GT's suspension, like the steering and brakes, is said to be unique to any other McLaren. It makes use of hydraulic dampers  and sophisticated control software, dubbed Proactive Damping Control, that takes input from sensors 'reading' the road, allowing the suspension to react to what's ahead in just two miliseconds. Comfort mode is claimed to offer "a particularly compliant ride".  Hydraulic steering is retained, with increased low-speed assistance to aid low-speed manouvers.

McLaren has worked with Pirelli to develop a bespoke P Zero tyre to balance performance driving and quietness. They pair with 20in front and 21in rear wheels, the largest ever offered by the brand.  The brakes have even been retuned to be easier to modulate in low-speed environments.

The GT is available to order now worldwide, priced from £163,000 in the UK, inclusive of taxes. Customer deliveries are expected to commence before the end of 2019. 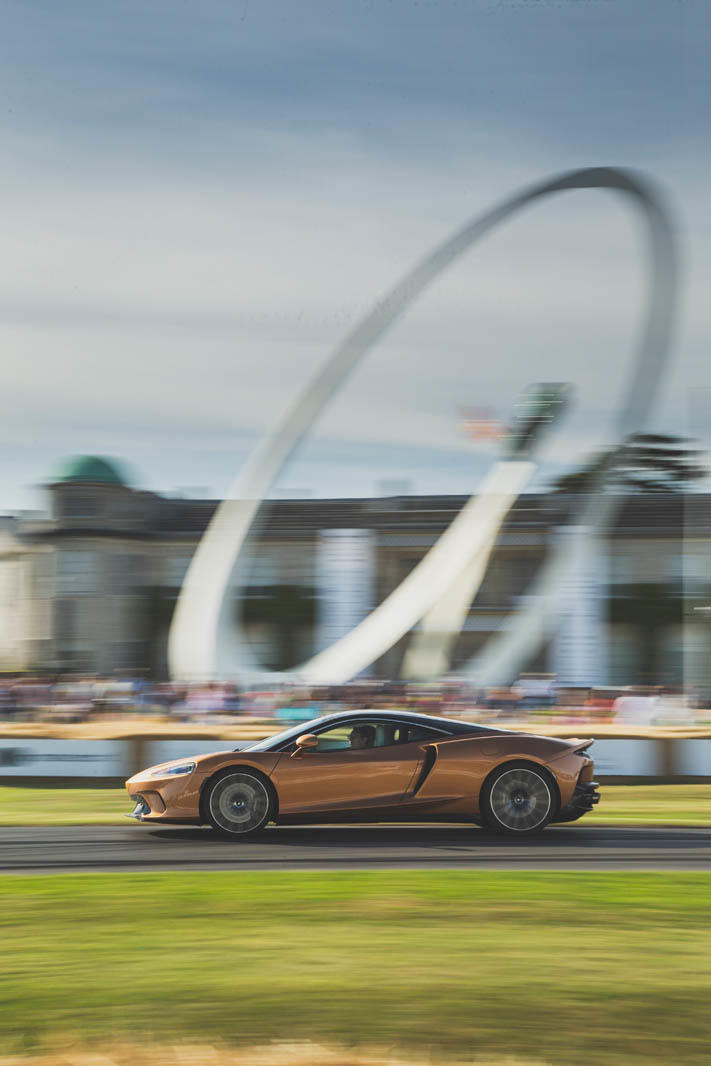 McLaren Senna vs Alpine A110: Can less really be more?

I used to own TVRs back in the day. I'd lose track of each rehash of a RWD V8, "Well this is a bit more of a tourer, hardcore", etc. They did at least come with different bodies but I gave up trying to keep up. It was all too obvious that they were pulling different rabbits from the same hat.

McLaren need to keep the range fresh, buyers in this segment love shiny new things that are ideally unique. The problem now is whether the average car enthusiast ceases to care over the weekly pseudo-model range expansion - if they do then McLaren buyers, like I did with TVR, might start caring less too.

The front definitely reminds me of a Ferrari 360. It's a nice looking car and it's nice to see a light interior. I can't stand black interiors. Do men think a black interior is somehow macho? They just suck the light away. Totally unsuitable for our full, gloomy weather.
si73 16 May 2019

The front definitely reminds me of a Ferrari 360. It's a nice looking car and it's nice to see a light interior. I can't stand black interiors. Do men think a black interior is somehow macho? They just suck the light away. Totally unsuitable for our full, gloomy weather.

I too like a light interior but they do show marks more easily.

I'm not sure I like the styling of this, seems less cohesive than their sports cars though I like the rear and tail light design. Is it soley a 2 seater or are there token rear seats making it a 2+2? Mid engined gt's are few and far between, the evora when first launched was almost gt esq but is now far more hardcore.

Not sure moving the heating and ventilation controls to the touch screen is an improvement either.