BACK TO ALL NEWS
Currently reading: Electric Seven due in 2023 as first Caterham EV
UP NEXT
New 2022 BMW 8 Series gets M-car makeover

Electric Seven due in 2023 as first Caterham EV

Caterham is working to safeguard the future of the Seven in the face of looming homologation and legislative hurdles – and is set to launch its landmark first EV in the coming years.

The British specialist brand was recently acquired by retail group VT Holdings, a division of which serves as the main importer of Caterham cars into the Japanese market.

CEO Kazuho Takahashi brought some 25 years of experience in high-profile motorsport, and Caterham CEO Graham Macdonald is confident that he’s committed to the survival of the brand.

“He loves the brand and he knows that we haven’t got endless money pits,” said Macdonald. “However, he’s determined to see this brand continue for another 50 years.”

Crucially, the acquisition will provide funding and security as Caterham gears up to launch a zero-emissions version of the Seven. 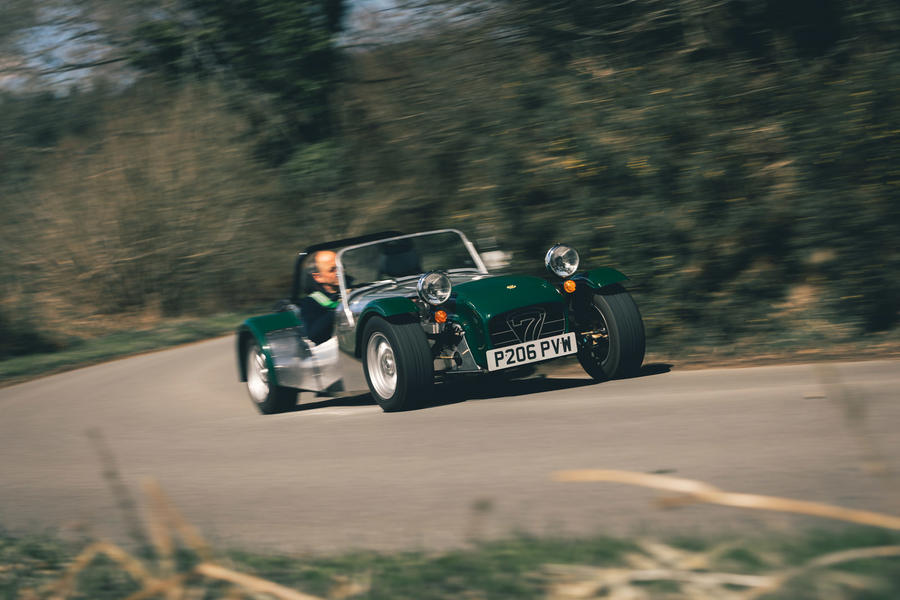 Macdonald affirmed that the priority is to ensure that any electric version of the diminutive two-seater “rides and handles like a Caterham”.

To that end, the ‘EV Seven’ will be developed with a focus on keeping weight down in an effort to preserve the model’s trademark agility and pace.

The suspension geometry and other aspects of the chassis will be recalibrated to mitigate the extra heft of the battery and electric motors, for example, and it will go without the weighty associated systems that are common on mainstream EVs, such as regenerative braking.

In line with reducing kerb weight, the EV will remain characteristically basic and is highly likely to maintain the Seven’s traditionally minimal, open-wheel silhouette.

A decision has yet to be made on whether the EV Seven will be “bigger, heavier and nicer to sit in” than the current variants or closely related in its concept, but Macdonald said that the latter is more likely.

Acceleration will be roughly on a par with today’s top-rung 620R, which can sprint from rest to 60mph in just 2.79sec.

Macdonald has already driven a prototype version of an electric Seven. He said: “It’s very much like a go-kart: it’s two-pedal, you’ve got rapid acceleration and it’s a different product to drive. No less exciting, but exciting in a different way.”

However, before putting the EV Seven into production, Caterham is looking to sign a partnership deal with another manufacturer to secure a supply of batteries and motors, similar to the way in which it uses Ford-derived engines in its current production models.

Macdonald remained tightlipped on which companies Caterham could partner with but confirmed that he won’t look to secure a complete, ready-made architecture.

He explained: “I think we would enter into some sort of partnership whereby we can purchase batteries and get them made to fit our dimensions, rather than buy a square skateboard that has a body-in-white on top. That loses the Caterham.”

The advantage of using third-party components, in addition to saving development costs, is that they will likely have been developed for mainstream road-going EVs and thus offer a readily usable range and charging speeds.

Hinting at the EV Seven’s sporting potential, Macdonald said that a racing version would need to be equipped with rapid charging or an “interchangeable battery” but the road car – which, like the current Seven, will be geared towards occasional use – is less likely to receive these technologies.

The EV Seven is set to be launched within the next five years, and Caterham’s 50th anniversary celebrations in 2023 look likely to provide a backdrop for the unveiling. However, the company also remains committed to petrol. 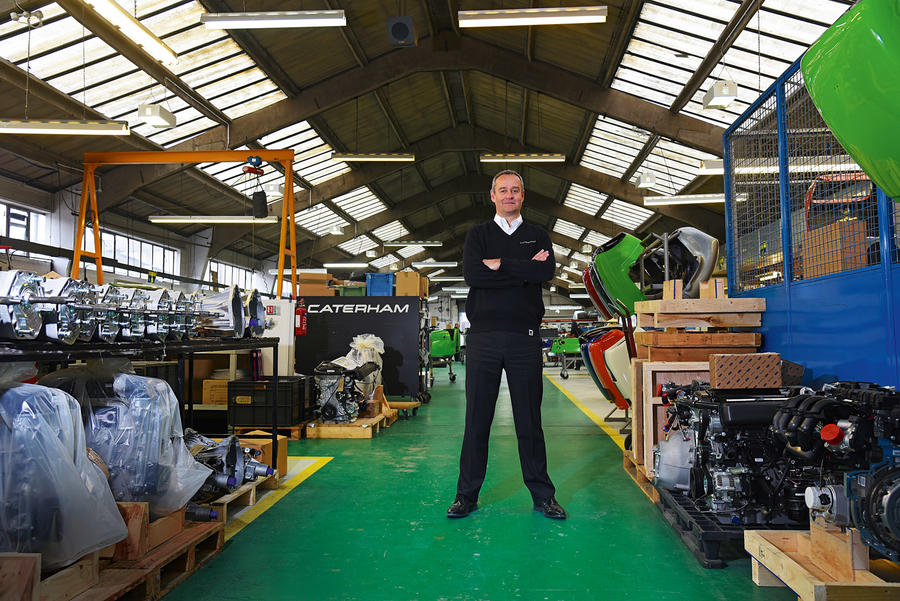 “My ambition is to keep combustion engines going as long as we possibly can, as long as we can find an engine that fits our product,” explained Macdonald, “but that’s becoming harder now. Everybody is going smaller and fitting turbochargers, and that’s not what we want.”

Even with a supplier lined up, Caterham will no longer be able to sell new ICE road cars in the UK – its second-biggest market – from 2030.

Increasingly stringent safety regulations coming into effect in the EU from 2024 mean the Seven is threatened there as well, given that it’s too small to host extensive radar- and sensor-based safety systems.

Despite these challenges, Macdonald is still confident. He said: “We’re not talking about the demise of Caterham. [The EU] is about a quarter of our production volume, so we need to think about how we can sell that and grow it elsewhere.”

One of the biggest obstacles for Caterham is securing access to the necessary homologation processes and testing facilities for new models as larger, mainstream manufacturers book up available slots.

Macdonald revealed that, to ensure that it can carry out these processes, Caterham has established an agreement with fellow low-volume firm Morgan.

He said: “They were going through the same thing, and we actually ended up sharing test slots and common parts. It was great that we got through it working alongside what many people see as our competition.”

Macdonald doesn’t view Morgan as a direct rival and said that collaborations between the British brands could be mutually beneficial.

He said: “If we can work with these other guys – be it Ariel, Morgan or even Lotus – to get through some of these problems, it reduces the burden on all of us and helps us all be successful.”

Lighten up: Why a 540kg Caterham Seven is the best driver's car

I suspect most readers will be choking on their 97RON at the idea of a FWD Caterham Clarkey, but I can see the sense in your suggestion. Perhaps an option for another brand.

Mind you, the Lotus Elan was FWD of course - some said it was the best handling FWD available.

This will come across as heretical but I do wonder if the best layout for a simple, country lane focussed, 2wd electric sports car would be to have a seperate motor for each front wheel?  Much more regen available through the front tyres and torque vectoring could really help with turn in and balance.  Wouldn't be able to do power slides but I grew out of those some time ago.

In theory, this sounds like my perfect fun car.

Light(ish) weight, stripped out, open top, cheap to run, not much to go wrong, handles well (hopefully) and fast.

But I reckon the eventual price tag will make me think twice somehow.