DS’s first all-new model could be a petrol-hybrid SUV when it launches a new product range from 2018.

Speaking exclusively to Autocar ahead of this weekend’s London ePrix Formula E racing, the brand’s sales and marketing boss Arnaud Ribault suggested a ‘second wave’ of new models would begin to arrive in two years, and that an SUV would be among the very first to go on sale.

“In the second wave of products, we will have a product to cover the most important segments of the premium market – SUV and sedan [saloon], from B to D segment,” he said, before hinting that a hybrid powertrain would be under the bonnet. “We have continued to develop electric and hybrid-electric powertrains, as we believe in this for high performance cars, and for 4x4s as well.”

Petrol will be the preferred choice of fuel for the combustion engine part of the powertrain, because DS’s latest sales indicate the luxury market is making a gradual shift from diesel to petrol.

While Ribault refrained from confirming whether an SUV or saloon would come first, he agreed it was important to launch an SUV soon in order to penetrate the fastest growing car segment. “But you know sedan is still very important, especially in Europe and even here in the UK,” he added.

Ribault hinted that the SUV would target young, active buyers who are fashion conscious and enjoy driving because that’s the image DS wants to create for itself. “We can describe a certain generation as ‘play hard and work hard’. This is the generation to show they are different. It’s this type of people we want to have our products.” 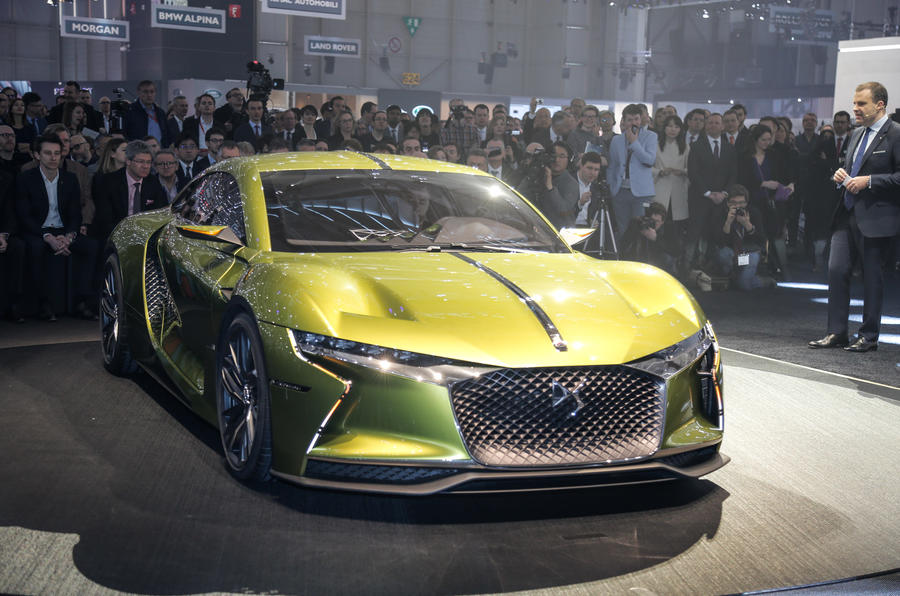 Both the new SUV and saloon will mix sporty performance with comfort, and like the rest of DS’s future range, are likely to be available with DS Performance models at the top. “Today, every [DS] model has engines of more than 200 horesepower, but just one is called Performance – the DS 3 Performance,” said Ribault. “But E-Tense [pictured above] shows the direction of our brand that we are interested in.”

The boss of DS Performance Xavier Mestelan Pinon went one step further to confirm his intentions to introduce performance models for the entire range, saying: “Currently you see we have the DS 3 Performance, but in the future we will have it [a Performance model] for all of the cars for the brand.”

Pinon wouldn’t put a date on when we can expect a full range of DS Performance models, but suggested it could be some way off given how new the company is.

“Don’t forget that we are a start-up, we only just built DS Performance as a racing brand,” he said.

DS plans to have six all-new cars launched before the end of this decade to cover the key areas of the luxury segment. In the long-term future, a halo sports car model could be on the cards, and Ribault suggested the electric DS E-Tense concept was an example of the brand’s intention to produce such a model.

“We would like to develop high-performance cars of hybrid and full-electric,” he explained. “This is the direction we are interested in – that’s why we created E-Tense.”

Ribault continued by suggesting DS could produce a rival for BMW’s upcoming all-electric i8. “I really like that car,” he said. “It’s something we have been looking at.”

Lets hope the DS brand can

Lets hope the DS brand can overtake the poor, decrepid Audi brigade. In terms of Luxury and Style. DS Maserati.

Arguably (and this is of course subjective) they have overtaken Audi on the style and luxury front. They just need to sort the perceived quality side of things and they'll have them licked.

Because the kind of people

2 July 2016
Because the kind of people they are aiming at wouldn't go near a Citroën no matter how good it was.

A new interpretation of the

3 July 2016
A new interpretation of the SM, with a similar body shape, the same emphasis on performance with comfort and grace and a smooth v6.

I would rob a bank to get the money to buy one.