BACK TO ALL NEWS
Currently reading: DS E-Tense Concept out in Paris after boss hints at production
UP NEXT
New Volkswagen Golf R 20 Years is most powerful production Golf

PSA chief Carlos Tavares has hinted that the battery-powered, all-wheel-drive technology showcase could have a future as a production car
Open gallery
Close

DS is demonstrating its E-Tense concept on the streets of Paris today, suggesting the car maker is gauging public response before deciding if the model will make production.

The car is being driven around key city sights as part of a promotional event with DS's DSV-01 Formula E car, marking the first time it has been seen outside of a motor show display.

Earlier this month PSA Group boss Carlos Tavares dropped a further hint that the all-electric DS E-Tense supercar shown as a concept at last month’s Geneva motor show could make it to production by 2021. 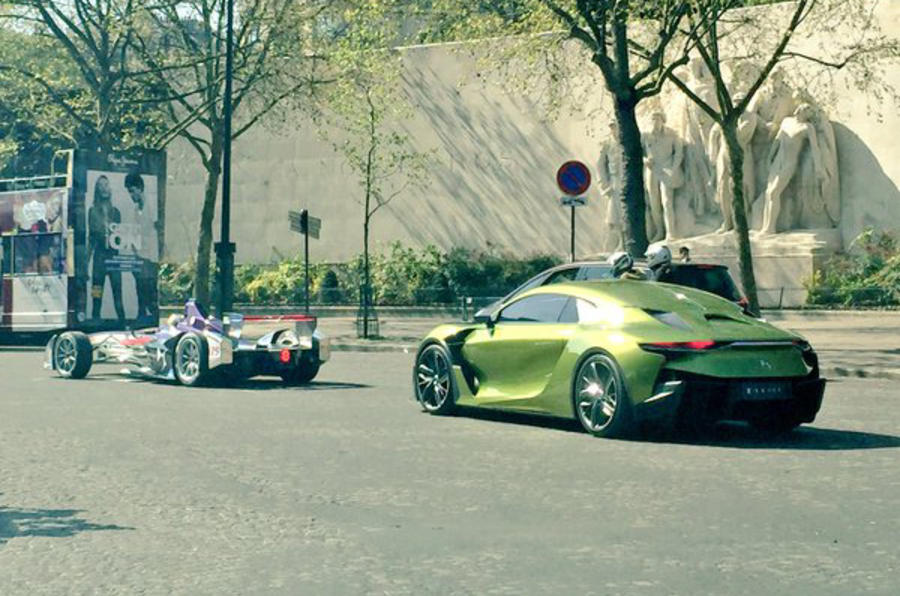 The four-wheel-drive, carbonfibre-bodied E-Tense is said to be capable of a 4.5sec 0-62mph time, a 155mph top speed and a 220-mile range. DS is setting about proving those claims with the concept, which was built to production car specification.

Speaking at the launch of the PSA Group’s new ‘Push To Pass’ business plan in early April, Tavares promised that the company will introduce “an all-wheel-drive electric technology available in our top-of-the-range cars” some time between 2019 and 2021.

Although Tavares didn’t mentioned the E-Tense by name, an image of the 402bhp Geneva concept appeared within the presentation that accompanied his speech. 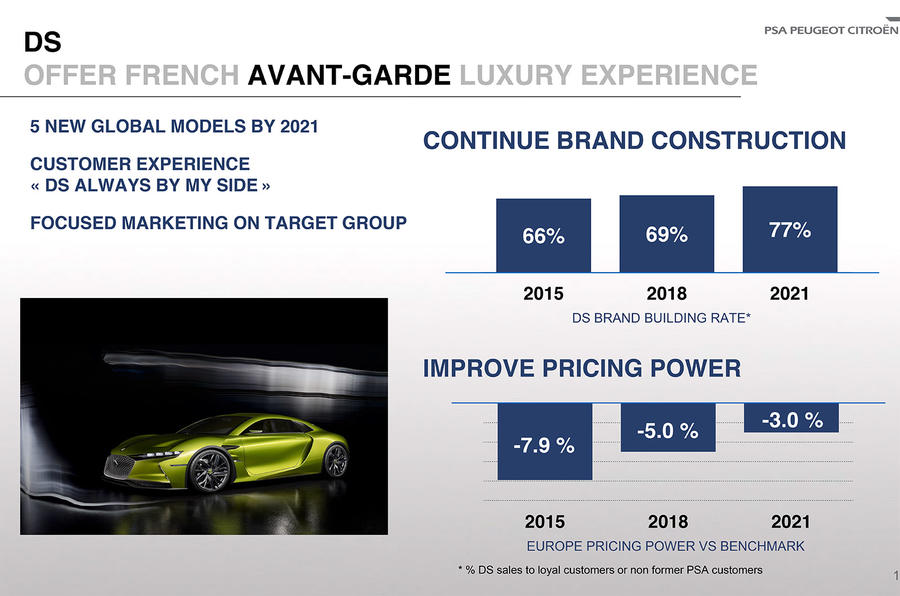 The Citroën DS3 is an upmarket, stylish supermini, but does it have what it takes to beat the Mini?

At the very least, this hints that the technology which underpins E-Tense will be used beneath an electric version of one of the five new models DS is planning to introduce during the next five years.

According to Tavares's presentation, DS’s key goals during the next phase of PSA’s development are to continue to build its brand and to improve ‘pricing power’ compared with premium rivals. A striking halo model such as E-Tense could be an effective way to achieve these targets, while at the same time highlighting the potential PSA’s electric powertrain technology.

“We recognise that there is an electrification under way and by 2019 we will bring the PSA technology in petrol plug-in hybrids and the second-generation electric powertrain technology,” said Tavares today, referring to the PSA Group's overall strategy for low-emissions vehicles.

“Before 2021 we will have seven vehicles with petrol plug-in hybrid technology, four new electric vehicles and an all-wheel-drive electric technology available in our top-of-the-range cars.”

Although a concept, the E-Tense was built to production car standards by DS so that it can be used as a technology demonstrator, and at the Geneva show company chiefs didn’t completely rule out making a road-going version.

Asked in Geneva if the concept would reach production, Tavares himself said: “In the next two years? No. It takes time to build a brand that has the pricing power to sell a big-ticket item like this. But I have learned in this business to never say never. I accept that we will need a halo car for the DS brand, but whether it will be this car, you must wait and see.”

DS is expected to begin launching an all-new six-model line-up in mid-2018, with a large saloon and SUV tipped as the flagship models. Tavares has told DS bosses to build brand awareness through initiatives such as Formula E racing and to avoid heavy discounting.

“If we sell at discounts, we will spoil the long-term story of being the only French premium brand,” he said. “We must build profitability, not scale.”

The E-Tense has, in effect, been made to production standards and everything on the concept is entirely viable, from the all-electric drivetrain to the way that pedestrian impact standards have been considered in its design.

The E-Tense is built around a central carbonfibre tub, with an aluminium subframe at each end. Suspension is by double wishbones at all four corners and under the rear bodywork are two Siemens AC electric motors that produce a total output of 402bhp. 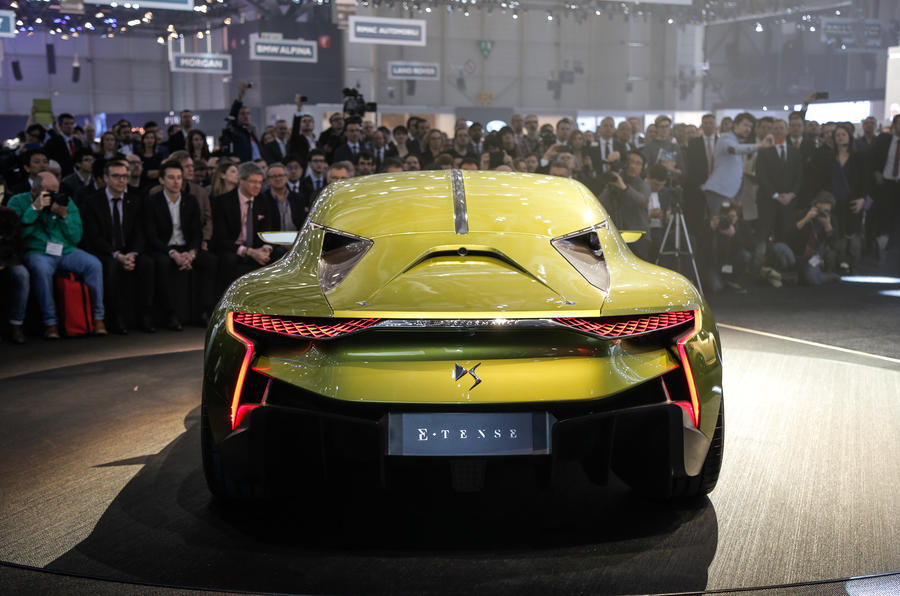 Rather than a one-motor-per-wheel set-up, however, both motors turn a common shaft, with the thinking being that two motors are lighter and easier to package than a single high-output motor.

Drive goes into a three-speed gearbox and then an active differential that biases torque across the rear axle. Power comes from a 53kWh battery pack mounted under the floor, itself fed by a rear-mounted high-speed charger. The battery pack weighs less than 500kg and the total weight of the car is around 1800kg.

The elegant lines were produced using a state-of-the-art live CAD system, which enabled virtual aerodynamic modelling. The slightly Lamborghini-like side profile is designed to help channel airflow at speed. A large carbonfibre diffuser is used at the rear to improve aerodynamic downforce.

There’s no rear window. Instead, a rear-view camera system relays an image from the back of the car to a ‘mirror’ display in the cockpit, a feature that is already destined for production in at least one future DS. The E-Tense also has windscreen wipers and door mirrors.

The striking interior features a central display screen mounted on an elaborately shaped dashboard extrusion. Hand-painted leather panels and seats have taken nearly 800 hours of work in a prototype trim shop. There’s also an in-built, centre console-mounted BRM watch that owners can remove when they leave the car.

The tyres are Michelin Pilot Super Sports (305/30 R20 at the back) and have a chamfered finish, designed to make them feel like velvet.

Why not have a rear window?

Why not have a rear window? Sure, have a rear facing camera to assist with parking and manoeuvring if the styling dictates a smaller aperture, but I can't see a reason for not having one at all. Its not as if its a good look....
bol 20 April 2016

I imagine Audi will be checking with the lawyers too

Come on DS, create your own identity or mine your herritage if you must, but this is hardly original.
xxxx 21 March 2016

build it, but change the grill first
View all comments (4)