BACK TO ALL NEWS
Currently reading: DS 7 Crossback E-Tense 4x4 PHEV prototype 2017 review
UP NEXT
Ford backs call for European ban on new ICE cars from 2035

The PSA Group is aiming to launch eight plug-in hybrids by 2021. We've had an early taste of its second-generation 'Hybrid 4' driveline
Open gallery
Close

For its second-generation attempt at a full hybrid powertrain, the PSA Group, which comprises Peugeot, Citroën, DS and Vauxhall/Opel, will switch from diesel-electric to plug-in hybrid petrol-electric technology.

The aim is to increase performance, refinement, zero-emissions driving range and design modularity for the group’s next wave of hybrid models, while simultaneously improving their CO2 emissions.

The first model in this new crop of PHEV models will be the DS 7 Crossback E-Tense 4x4, due on the market in early 2019, and DS gave us an early taste of what to expect from the driver’s seat of a prototype at a proving ground near Paris this week. 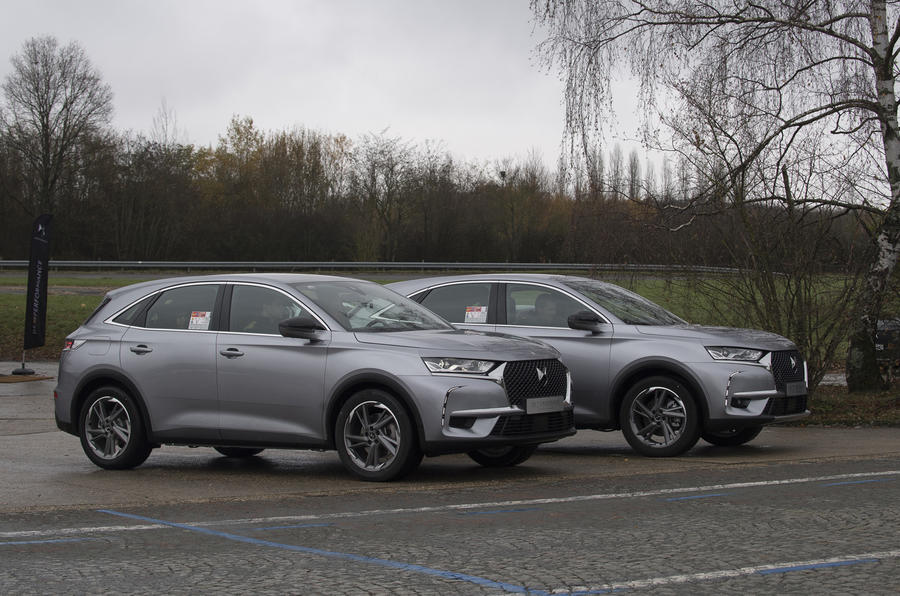 Named after DS’s electric supercar concept first shown in 2016, the 7 Crossback E-Tense 4x4 has a powertrain consisting of a 200bhp 1.6-litre turbocharged petrol engine up front and a 110bhp electric motor on each axle. The front-mounted motor doubles as an engine starter-generator and transmits power to the front wheels via the car’s eight-speed automatic gearbox, while the rear one drives the rear wheels via ‘direct drive’ reduction gearing.

Both motors draw power from a 13kWh lithium ion drive battery capable of a peak power supply equivalent to 125bhp, mounted next to a fuel tank of reduced size compared with that of the regular 7 Crossback. The battery will not be DC fast-charge compatible but will charge on a ‘Type 3’ 32-amp AC mains charger from flat to full in two hours. A home charge from a three-pin plug will take seven hours.

Zero-emissions battery range for the car is expected to be between 30 and 40 miles. 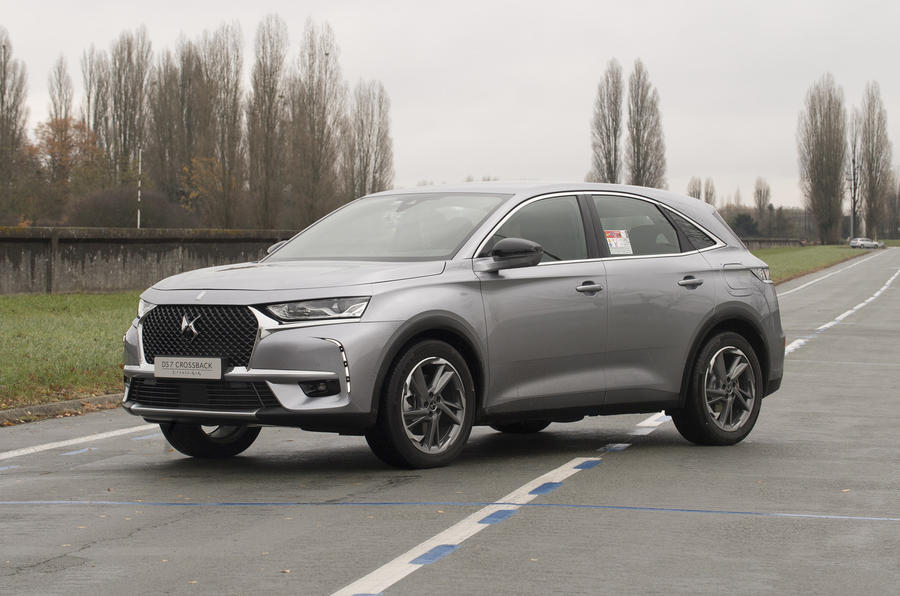 Despite adding between 250 and 300kg to the kerb weight of an equivalent petrol-powered 7 Crossback, the new petrol-electric plug-in hybrid technology is expected to deliver big-hitting performance for the car. Peak power output will be 296bhp, translating to 0-62mph performance of around 6.0sec – but engineers are also aiming for lab-verified CO2 emissions of around 40g/km under new World Harmonised Light Vehicle Test Procedure (WLTP) rules.

The DS 7 Crossback E-Tense 4x4 will have five different driving modes by the time it launches, though only two were available when we tested it: ZEV (electric-only) and Hybrid.

With plenty of powertrain response and abundant low-speed torque, the car steps off from standing smartly and very quietly, easily keeping performance in reserve, even in ZEV mode. It can be accelerated up to urban speeds and beyond without needing input from its piston engine and is mostly powered by that directly-driven rear axle when operating in ZEV mode, making for strong, instant drivability at low speeds and a close match for the driving experience of a pure electric car.

At higher speeds, where you might expect the car’s geared front-mounted motor to take over the balance of responsibility for propelling the car, however, the prototype seems to continue to rely on that rear axle, beginning to feel less potent and easily drivable as a result.

Selecting Hybrid mode doesn’t make the car’s 1.6-litre petrol engine start immediately, although with separate Sport and 4x4 modes still to be tuned for the car, that’s probably as it should be. Likewise, it’s perhaps understandable that the PHEV powertrain is a bit hesitant to rouse its petrol engine and to deliver full power in this mode, even in response to a flattened accelerator pedal; because other operating regimes will be tuned for quicker driving, and it’s reasonable to assume this one will be intended mostly for more economical mileage. 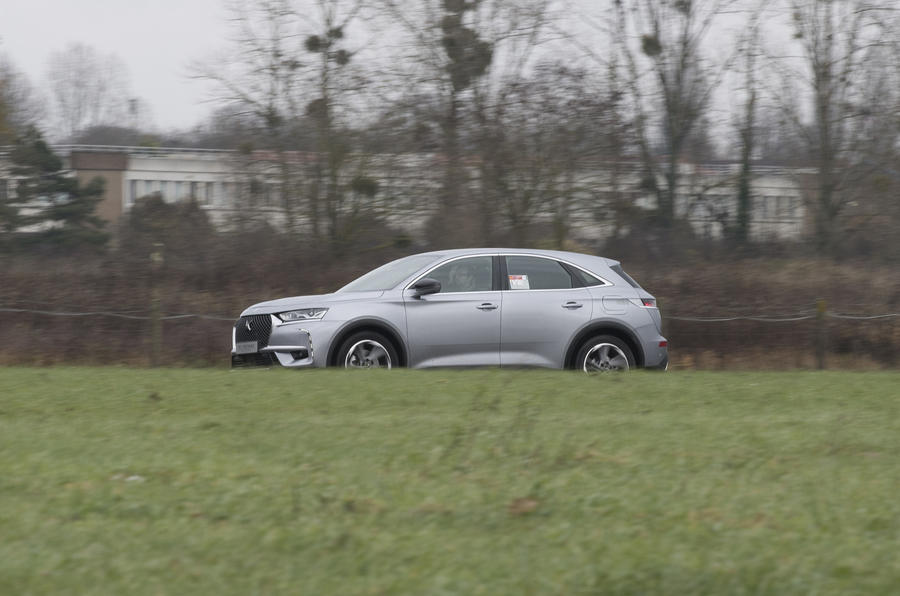 When the car’s engine does start, it runs fairly quietly and smoothly – much more so in both cases, and less incongruously too, than the four-cylinder diesel engine in PSA’s outgoing ‘Hybrid 4’ powertrain. At full power, our test car didn’t quite feel like it was running in full 300bhp trim and its transmission occasionally struggled to smoothly combine peak torque from the piston engine and front electric motor under sudden, wide throttle openings. Both are shortcomings you might expect in an early prototype running a complex hybrid powertrain, however, and ought to have been addressed long before the car is ready for production.

Through corners, the car’s suspension contained the extra weight of its electrified propulsion system quite well, gripping evenly, responding keenly, steering manageably and retaining decent body control. It did ride with markedly less sophistication and suppleness than some versions of the standard 7 Crossback we tested, however.

The 7 Crossback E-Tense 4x4 will be the first of eight PHEV models to be offered across the DS, Peugeot, Citroën and Opel/Vauxhall brands on sale by 2021, all of them based on the same EMP2 platform with differing ‘top hats’ (PSA's engineering terminology for the body and cabin of the car that sits on top of the chassis). The new powertrain is flexible enough to work using other combustion engines for primary power or as generators; at differing overall power output levels; and in both ‘one-motor’ front-wheel drive and ‘two-motor’ four-wheel drive forms. 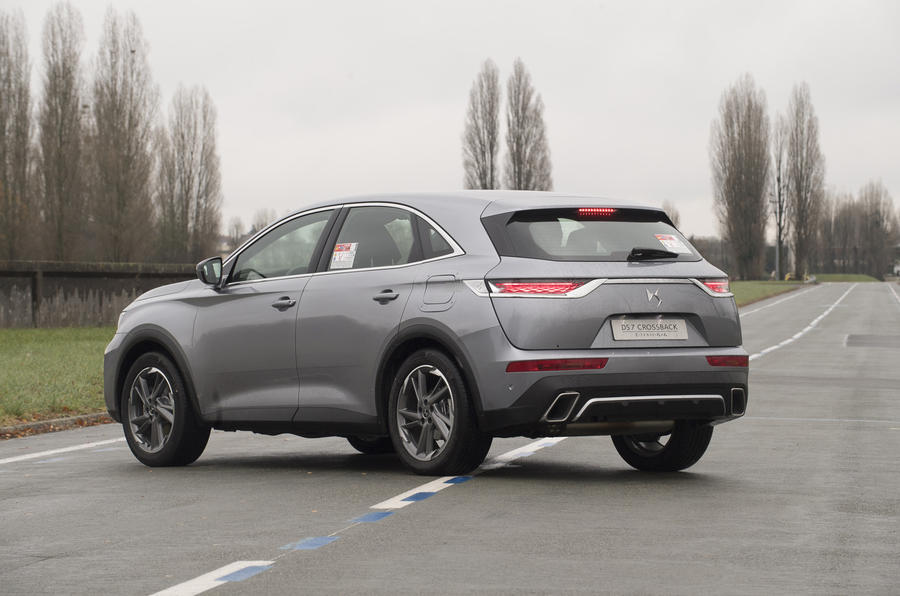 It’s likely that the 7 Crossback ‘PHEV’ will be introduced in highly equipped, limited-edition form when it arrives in showrooms in 2019 and will likely cost in excess of £50,000, making it a more niche prospect than plenty of other petrol-electric options.

But assuming PSA can continue to develop its new plug-in powertrain technology and bring it to market in other models at a less expensive price level, we’d expect it to make for some viable and compelling opposition for the likes of the Volkswagen Golf GTE and Mitsubishi Outlander PHEV, possibly even before the end of the decade.

Many friends have had so many bad reliability stories that I wouldnt go near any Citroen. BUT now they have Opel in their barn so why not chuck this into that stable? It needs badly something like this because the Zafira "fireball" has long gone and their Moka silly cars dont hack it. This design is - considering its hard to make a box pretty - is good and upto the levels of Mazda Mitsubishi Skoda and Kuga standards. But as a D7 - no thanks.

Seems a bit stupid to use the

Seems a bit stupid to use the petrol engine - why not stick with a modern Euro6 diesel (ie one that has lower NOx emissions) and have better figures than this ? Madness.

Tarted up would be nicer... this is tarted down

I thought DS would major on French flair? This looks like a new Kia...