The styling of the production Citroën C4 Cactus will stay largely true to the concept, as these photographs taken during cold weather testing show.

Citroën will unveil the production version of its C4 Cactus on February 5. The date marks five years since it launched its DS line, and 136 years since the birth of company founder Andre Citroën.

Speaking at the Frankfurt motor show last year, Citroën C Line boss Pierre Monferrini said reaction to the concept had been “very positive” and it was a “very important step for us as the concept is a very difficult one to explain without a concept car”. Cactus will become a name used for Citroëns that aim to offer buyers a simple, but not budget experience, offering them cars with well executed features of what they need and no frivolous extras.

Monferrini suggested the model would not be based on Citroën's new corporate EMP2 platform seen beneath the new C4 Picasso and Grand C4 Picasso models, as well as the Peugeot 308. The model is instead set to get tried and trusted mechanicals from elsewhere in PSA.

“The question is not about [the] platform,” said Monferrini, “the question is about what will it weigh, and what will the CO2 be. The customer only wants to know what it will cost them. From there, you will be pleasantly surprised. That’s the meaning of the Cactus.

“We’ve several platforms available to us; the EMP2 of course but also the platform for the C-Elysee [a budget saloon sold in China], the C4, the C4 Aircross. The customer wants to know CO2 and weight, these are important for the costs, not weight.”

At the time of the show, Monferrini said the design of the Cactus concept was set to change little from concept to production. “It will of course get windows and classic doors, but other things stay like the sofas inside and the Air Bump on the doors, they’ll stay. The floating C-pillar stays also.”

The sofa-style interior for the front seats would remain for automatic versions of the C4 Cactus. There would be two individual seats up front for front passengers that look as though they’re joined.

The engine range is likely to be simple, with lower-powered units and simple transmission options. “You won’t find the 155 horsepower THP engine [a 1.6 turbo petrol] in the Cactus,” said Monferrini. “If we did it, we’d need bigger brakes, a bigger, wider structure that makes it more expensive. We’ve got the DS3 for that.”

Monferrini said it was still being decided whether the C4 Cactus would be marketed as a hatchback rather than a crossover in the C4 line-up. The concept was more a crossover in style, with the hatchback spied more of raised hatchback. “We’ve not yet decided on hatchback or crossover. It could be a cross-hatch, why not?” 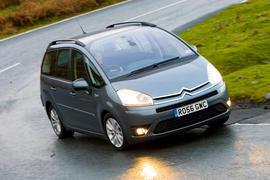 The Citroen Grand C4 Picasso is a stylish, spacious and well-priced compact MPV with seven seats. Auto 'box is not good and residuals poor

Best to wait a bit to see what it really looks like before going on about it too much!
GeToD 23 January 2014

They are going to "DS5" the concept.... a brilliant concept screwed up by compromises
Frightmare Bob 23 January 2014

Citroen C4 Cactus will stay largely true to the concept, as these photographs taken during cold weather testing show.

Looks to me more like it has been watered down quite a lot.