Bugatti is developing the world’s first 3D printed brake calipers for introduction onto its Chiron hypercar later this year – and it said the part is the first of several new significant production breakthroughs.

Each titanium caliper is made from a monobloc of titanium that is crafted using 400-watt lasers. Titanium powder is deposited in 2,213 layers to produce the part, which is heated to 700 degrees celcius during a 45-hour-long production process.

Bugatti claims the caliper - which is the longest car caliper in production at 41cm long - weighs 2.9kg, 2kg less than the aluminium caliper currently offered with the 1479bhp car. Despite the reduction in weight, it’s said to be tougher than the aluminium part, able to withstand 125kg of pressure per millimetre. 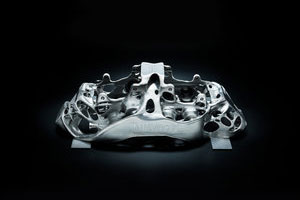 The technology used to create the new caliper stems from the motorsport and aviation industries. Bugatti said the caliper is the first of several potential new parts it can now produce thanks to the introduction of this high-tech 3D printing system.

Frank Götzke, Bugatti’s head of new technologies, has also hinted the tech could be used in the wider Volkswagen Group. He said: “In 3D printing development, Bugatti is the leader in the group.

“Everyone can, and should, benefit from our projects. This is also part of Bugatti’s role as the Group laboratory for high-tech applications.”

Next Bugatti Chiron set to be electrified

Bugatti Chiron: the numbers behind the £2.5 million hypercar

What absolute twaddle - "able to withstand 125kg of pressure per millimetre".

mm is a length

pressure is a force/area i.e. N/mm2 or pounds per square inch

Nothin about the sentence makes any sense at all.

Ettore Bugatti would weep if he new the Wolfsperg crims now owned his brand.

The industry name for this is Additive Manufacturing, which is a bit more sensible than the more widespread 3D Printing name. The part is made from a powder which is essentially welded layer by layer, but on a miniscule scale. You can control the size of the powder and the heat from the laser, which allows you to finely tune the microstructure of the part (which in turn determines the material properties - much like cast parts aren't as strong as forged parts). This is why the parts can achieve near-forged or better properties, since the microstructure can be made consistent and as required.

On top of this, the swiss-cheese - like structure of these callipers will increase the surface area of the calliper significantly, increasing the cooling rate and stopping as much heat getting to the brake fluid. This will definitely improve the performance of the brakes, especially when you consider the braking energy when you're travelling at 260+mph.

The technology is being used to make functional components for jet engines - it's here, and it's only going to get better!

The 'printing' part of this

The 'printing' part of this is slightly misleading and suggests lightweights materials but is a layman's term rather than something used in industry. Layers of material are built up in such a way that machining and other post-manufacture finishing procedures that can weaken a cast part or not required, hence retaining its integrity. Plus, very complex parts that cannot be made in a single piece can be constructed as a 'printed' piece.

It's correct that 3D printing is predominantly used for lightweight, non-structural parts that can be made cheaply. But the technology is developing quickly to now include high-strength parts when using certain meterials.