The coupe-cum-hatchback version of the 3 Series is no more, with cost-cutting rather than lack of demand reportedly to blame
Share
Open gallery
Close
Share story

BMW has ceased production of its 3 Series Gran Turismo with no direct replacement on the cards, as the model is removed from price lists for 2020.

With bosses originally claiming demand for the model is still at the desired levels, the decision to ditch the model is instead part of a major cost-cutting efficiency drive.

BMW launched a new 3 Series saloon last year, with a Touring version following that, but BMW chairman Harold Krüger confirmed that "there won't be a successor" to the current 3 Series GT in a statement accompanying an interim financial report.

Designed to combine the looks of the saloon with the practicality of the Touring, the GT was longer and wider than both those variants, with greater interior space. It was offered in the UK only with all-wheel drive. BMW's ever-expanding range of SUVs, offering a similar mix of extra space and a higher-driving position, was likely a factor in the decision not to replace the model.

The move was one of a number of cost-cutting measures being undertaken by BMW that Krüger listed as part of his statement. The firm is making the moves to save more than €12 billion (£10.1bn) in costs.

Other cost-saving measures include reducing up to half of BMW’s current drivetrain variants by 2021, enabled by the firm’s shift to two new flexible platforms, reducing complexity in vehicles and shortening the development process for new vehicles by up to a third. 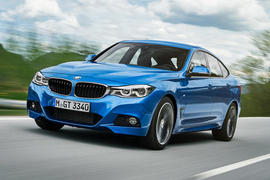 BMW produced the 3 Series GT hatchback to give the range another string to its bow, but the execution has led to too many compromises

The beginning of the end of

Perhaps they've realised that it's ok to only cover say 90% of the market, and that they don't have to cover every single niche as it doesn't make financial sense

Be interesting to see how

Be interesting to see how many of these stupid varients of the 3, 4 ,5and 6 they sell .If they stuck to standard model in each range then they would make more money with not having to make endless  re tooling equipment which in the end we all pay for .BMW are really just a stack  high but NOT  cheap car maker. The days of them being premier manufactures has long since gone. Just look at any supermarket car park and yep full of non exclusive German brands .They are now the  eqivelent of  bake bean,s of the car industry. And   itrs now catching up with them. + they are not to reliable either. I notice also they are sruggling especially now China is causing all car makers big problem,s as it economy is deceasing.

...Other cost-saving measures include reducing up to half of BMW's current drivetrain variants by 2021...

I wonder if this will the end of BMW's V12, V8 and maybe some straight engines.

Would be glad to see the back of them!, less choice is a good thing, the Mini had so many choices that it would be rare to find two with identical spec, yes, it’s about time there was less choice.

I never understood the 3GT vs 4-Series Harchback

I mean side by side it's a little bit clearer, but on paper they are awfully close. One wonders how two very nearly identical vehicles ever got the go ahead in the first place. I wonder which one sold better?

7 May 2019
Good decision it didn't look right and there wasn't a market for it as everyone perfered the more classy saloon. Now they just need to axe the god awful X2,X4 and X6.

Good decision it didn't look right and there wasn't a market for it as everyone perfered the more classy saloon. Now they just need to axe the god awful X2,X4 and X6.

Sadly none of the German big 4 will do that as they are making money from the SUV’s.So it is up to all of us who are CAR enthusiasts to STOP BUYING these awful monstrosities,most families have one, including mine! But I don’t drive it!

7 May 2019
Typical 'car enthusiast' snobbery. People buy these cars because they like them. I happen to like the X coupes and I would consider myself an enthusiast. Variety is the spice of life and there are cars for all tastes, just because some don't match tours doesn't mean they are wrong.

Typical 'car enthusiast' snobbery. People buy these cars because they like them. I happen to like the X coupes and I would consider myself an enthusiast. Variety is the spice of life and there are cars for all tastes, just because some don't match tours doesn't mean they are wrong.

And herein lies the problem, someone who considers themselves "an enthusiast" calls them "X-Coupes".

They are not coupes, they are more expensive and less practical version of an SUV, designed to appeal to people who beleive anything they are told, as long as it has the right lable or badge..