BACK TO ALL NEWS
Currently reading: 2016 BMW 3 Series Gran Turismo facelift revealed
UP NEXT
Buy them before we do: second hand picks for 15 October

Lightly reworked five-door will be priced from £30,405 in the UK and comes with 18 different engine, gearbox and drive configurations
Share
Open gallery
Close
Share story

The BMW 3 Series Gran Turismo has been updated for 2016 following last year’s mid-life facelift for the 3 Series saloon and Touring models.

Set for delivery in September, the lightly reworked five-door liftback variant of BMW’s best selling model will be priced from £30,405 in 320i Gran Turismo guise in the UK – a moderate £345 increase over the existing 320i Gran Turismo originally launched in 2013. This mid-life facelift comes close to two years ahead of the next-generation GT's arrival, which will arrive some time in 2018.

Predictably, the styling changes made to the facelifted 3 Series Gran Turismo are slight.  Visual differences over today’s three year old model include a lightly revised air duct design up front, standard fit LED headlamps with newly design lens graphics and an altered valence panel on the lower edge of the rear bumper.

At 4825mm in length, the facelifted 3 Series Gran Turismo continues to be 195mm longer than the 3 Series saloon and Touring – some 110mm of which is concentrated within its unique wheelbase, which stretches to 2920mm. 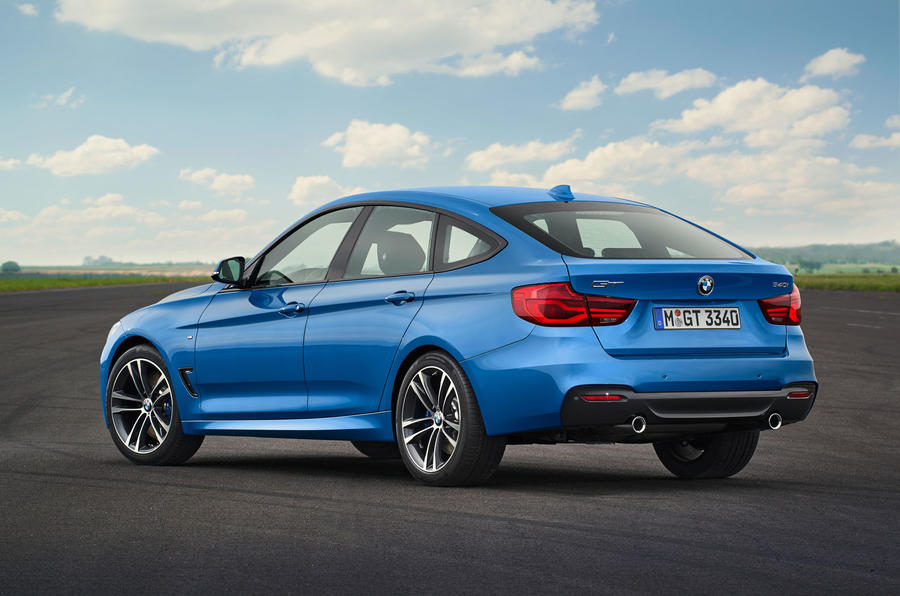 Following the lead of its recently facelifted 3 Series siblings, the new model will be offered in three different trim livels: Sport Line, Luxury Line and M-Sport – the latter featuring individual styling touches.  It also comes with the choice of two new exterior colours as well as three new wheel designs and what BMW describes as a “wider array of upholstery variants”.

Inside, BMW has moved to answer criticism of below par quality with new trim applications together with lightly altered switchgear, standard Bluetooth smartphone connectivity as well as the latest version of its navigation system. At 520 litres, nominal boot capacity is 40 litres above that of the 3 Series saloon and 25 litres more than that offered by the 3 Series Touring.

The facelifted 3 Series GT will be produced with 18 different engine, gearbox and drive configurations.

BMW produced the 3 Series GT hatchback to give the range another string to its bow, but the execution has led to too many compromises

As with the facelifted 3 Series saloon and Touring launched in the UK last year, the updated model receives a number of new or upgraded engines, including the latest evolution of the German car maker’s turbocharged 2.0-litre four-cylinder petrol engine, the B48 as it is known internally.  It develops 181bhp in the facelifted 320i Gran Turismo and 248bhp in the 330i Gran Turismo. 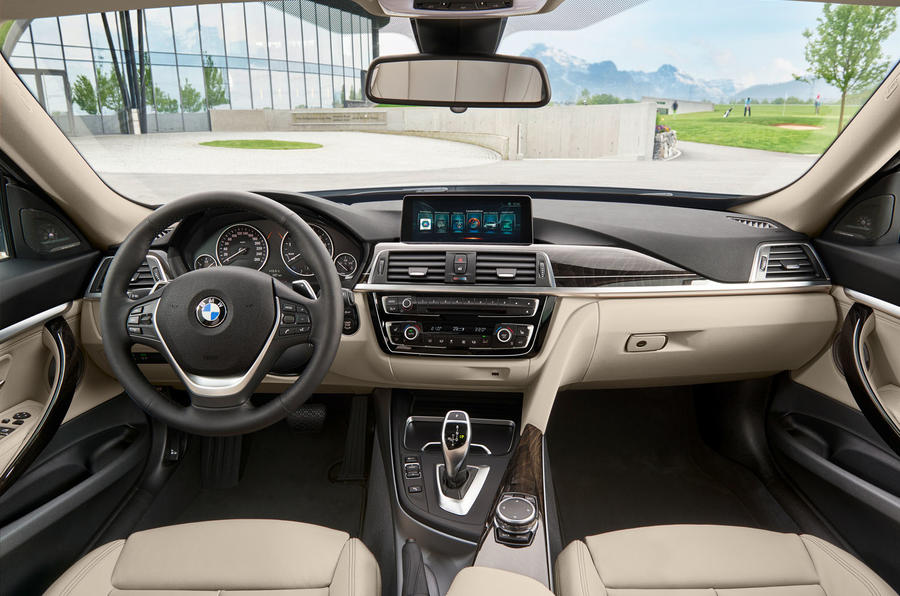 A further addition to the line-up is the latest incarnation of BMW’s turbocharged 3.0-litre six-cylinder engine, the B48, which provides the new 340i Gran Turismo with 20bhp more than the 335i Gran Turismo it replaces at 321bhp.

The 320i, 318d and 320d Gran Turismo come as standard with a six-speed manual gearbox, but they can be specified with the eight-speed torque converter automatic that comes as standard on all other models in the line-up  and is claimed to provide a three per cent drop in fuel consumption owing to a reduction in converter slip and revised ratios. 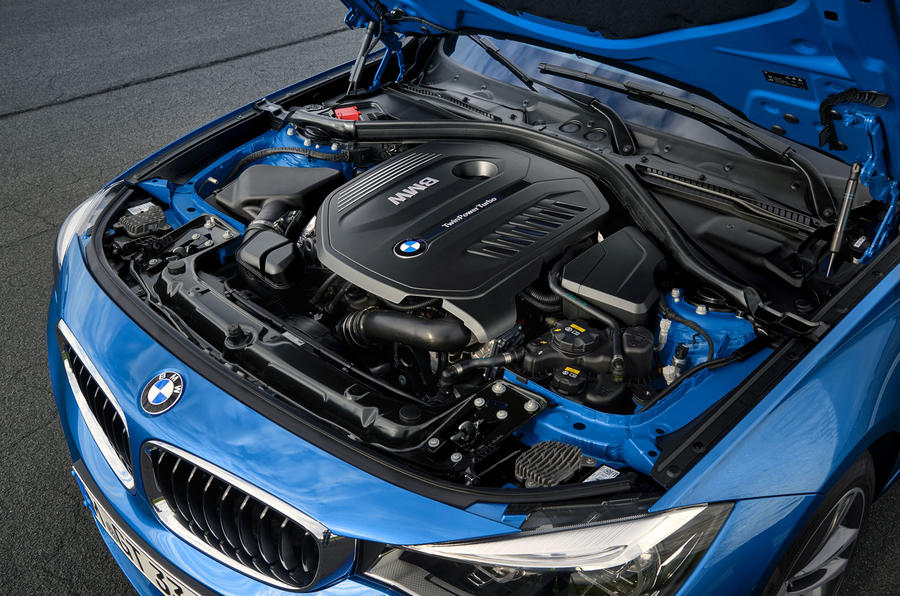 The most economical model in the line-up is the 318d Gran Turismo, which boasts a claimed 4.5 per cent improvement in economy with combined cycle consumption of 62.8mpg with the standard six-speed manual and 65.7mpg in combination with the optional six-speed automatic gearbox, giving it average CO2 emissions of 117g/km and 112g/km respectively.

The 320d Gran Turismo is claimed to possess an even greater 13.8 per cent improvement in economy with figures of 61.4mpg in manual form and the same 65.7mpg as the 318d Gran Turismo when running the optional automatic gearbox.

Fastest of the lot is the four-wheel drive 335d Gran Turismo xDrive. It sprints to 62mph from standstill in a claimed 4.9sec on the way to a limited top speed of 155mph

BMW had introduced the GT series to India with the 5 Series first. The car was big and spacious but costed a bomb. With the 3 Series GT coming in three years back, the GT badge became more affordable. The added space in the back and in the boot has pushed many to opt for the 3 GT rather than the 3 Series sedan.

BMW has decided to revise the 3 GT this year and it will be launched on October 19. This is a mid-life upgrade with a facelift and a few changes on the equipment list. The LED headlamps are all new but retain the signature twin rings accompanying the kidney grille on the front fascia. It looks almost the same as the 3 series sedan but gets new bumpers in the front as well as in the back. The facelift will also come with a new design of alloys. The deployable hidden spoiler will continue to adorn the notchback-like boot lid.

The 3 GT cabin is spacious and luxurious. The understated dark interior exudes comfort and quality and now gets some new equipment. The infotainment interface has been revamped with a new screen and software and gets USB, AUX and Bluetooth connectivity including a GPS navigation system. The front seats are electrically adjustable and it gets electrically adjustable and retractable wing mirrors and a sunroof as well. Cruise control, dual-zone climate control along with start-stop button and keyless entry are standard.

The 3 GT will be offered with the same existing 2.0-litre diesel engine that develops 184bhp of power and 380Nm of torque mated to an eight-speed automatic gearbox driving the rear wheels. It comes with 6 airbags standard along with driving aids like ABS, EBD, traction control, hill-hold control et al.

The 3 GT sits half a segment above the 3 Series or the Mercedes C-Class and lower than the Mercedes E-Class and the Audi A6 and hence doesn’t have any direct competition. But for someone who wants a little bit more than the standard 3 Series, it is certainly a good option.

The German manufacturers will stop copying every variant their rivals produce and slim their ranges down, surely?
Marc 1 June 2016

The German manufacturers will stop copying every variant their rivals produce and slim their ranges down, surely?

Why should they? It generates sales, how long did take those comedians in charge of Jaguar to bring out an estate version of just one of their saloons.