BACK TO ALL NEWS
Currently reading: 2019 BMW 3 Series Touring could bring first M3 estate
UP NEXT
Lamborghini confirms LMDh entry for 2024

New ‘G21’ Touring will be more spacious than ever, and could be offered with a full M variant for the first time
Open gallery
Close

BMW will follow up the launch of its new 3 Series saloon with the inevitable Touring model, tipped for a likely reveal at next year’s Geneva Motor Show in March. An M3 Touring could also be on the cards for the first time, too.

The Audi A4 Avant rival, codenamed G21, will feature a rear-end design that stays relatively faithful to the outgoing car, while also mimicking the current 5 Series Touring’s roof profile and tailgate angle.

The new estate will also benefit from pop-up tailgate glass, allowing small bags to be dropped into the boot without having to open the entire hatch. The boot itself is also set to grow in volume, just like the saloon.

The outgoing Touring offered up a 495-litre capacity with the seats up, and with the new saloon boasting a 480-litre load bay, the upcoming 3 Series Touring’s boot should offer more than 500 litres, putting it on a par with its main rivals.  Expect increases in leg, head and shoulder room for rear seat occupants, too. 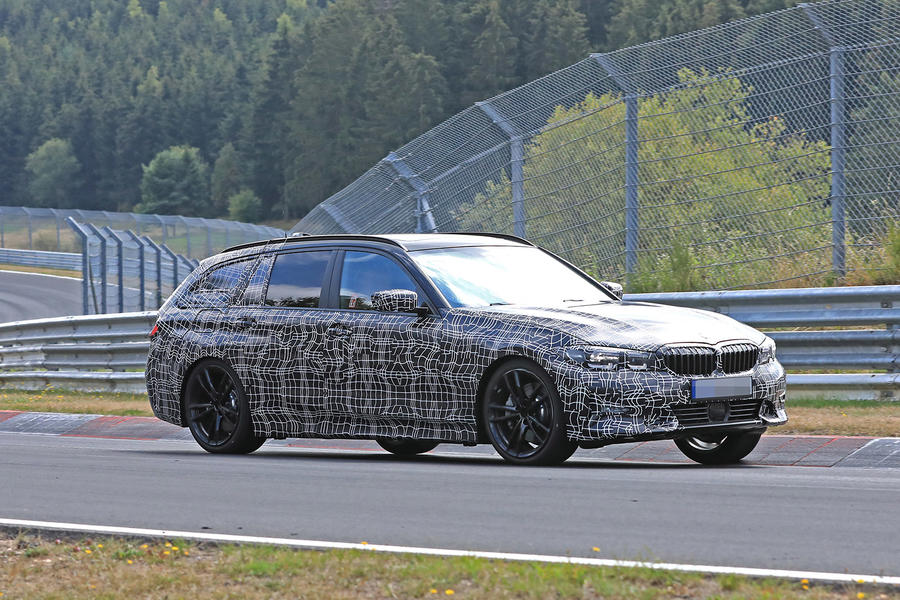 The new 3 Series saloon’s initial engine range of two diesels and one petrol will transfer over to the Touring. Further variants will be added after deliveries begin in the middle of next year.

BMW has never officially produced an M3 Touring, but insiders at the firm suggest that it’s finally being considered as a rival to the Audi RS4 Avant and Mercedes-AMG C63 Estate. The development costs would be minimal, allowing BMW to justify launching a load-lugging M3 in European markets but not the US, where the estate isn’t generally favoured by buyers.

BMW won’t be complementing the Touring with a 3 Series GT this time, however, due to slow sales of the current model, but there will be the launch of a new 4 Series Coupé next year before it goes on sale in 2020.

A convertible will follow that, likely continuing with the folding hardtop arrangement of the outgoing car, and a new version of the popular 4 Series Gran Coupé is also due in 2020. That car will share its platform with the i4 electric saloon, due by 2021.

A 3 series with more than 4

Not M3 Touring but

Giulia Quadrifoglio Touring would be exciting

Yep, I agree, more chance them doing it, but, with Italy in a worse position than us, it’s not likely...shame.

Last year I had a loan of a Deisel touring with the kit on it, it looked great!, but, the over riding thought going through my mind was...don’t grind the expensive Carbon fibre splitter on the front!, that alone kind of puts me off sticking expensive bits on a Car, so, yes, if you like it, do it!, buy one you won’t regret it, but just watch those Kerbs, Alloys are easy damaged, twenty mile an hour areas?, don’t bother, you’re guaranteed to grind the splitter....