BACK TO ALL NEWS
Currently reading: The Autocar sports car World Cup - the final
UP NEXT
First drive: 2022 BMW XM prototype

We've tested sports cars from across the globe to find out which nation makes the best drivers' car. And it's down to England and Germany in the final...
Open gallery
Close

THE FINAL: ENGLAND VS GERMANY

There will be no tortured analogies, no reference to pool towels, 1966 or penalty shootouts. These two are too special for that, their roles too important. After three rounds and 14 increasingly competitive contests, just two countries remain: the two greatest producers of sports cars there are.

Before you get reading, check out our semi finals here

It seems somehow right that it should come down to these two, and yet what different approaches these nations have taken to get themselves to the final. For Germany, it’s always the mainstream route, through massive premium brands such as Audi, BMW, Mercedes-Benz and now Porsche. For England, it’s the specialists that have led the way: Caterham, Lotus, Aston Martin and now McLaren, minnows that could be swallowed whole by the paperclip budget of any of the German brands that have been put forward. 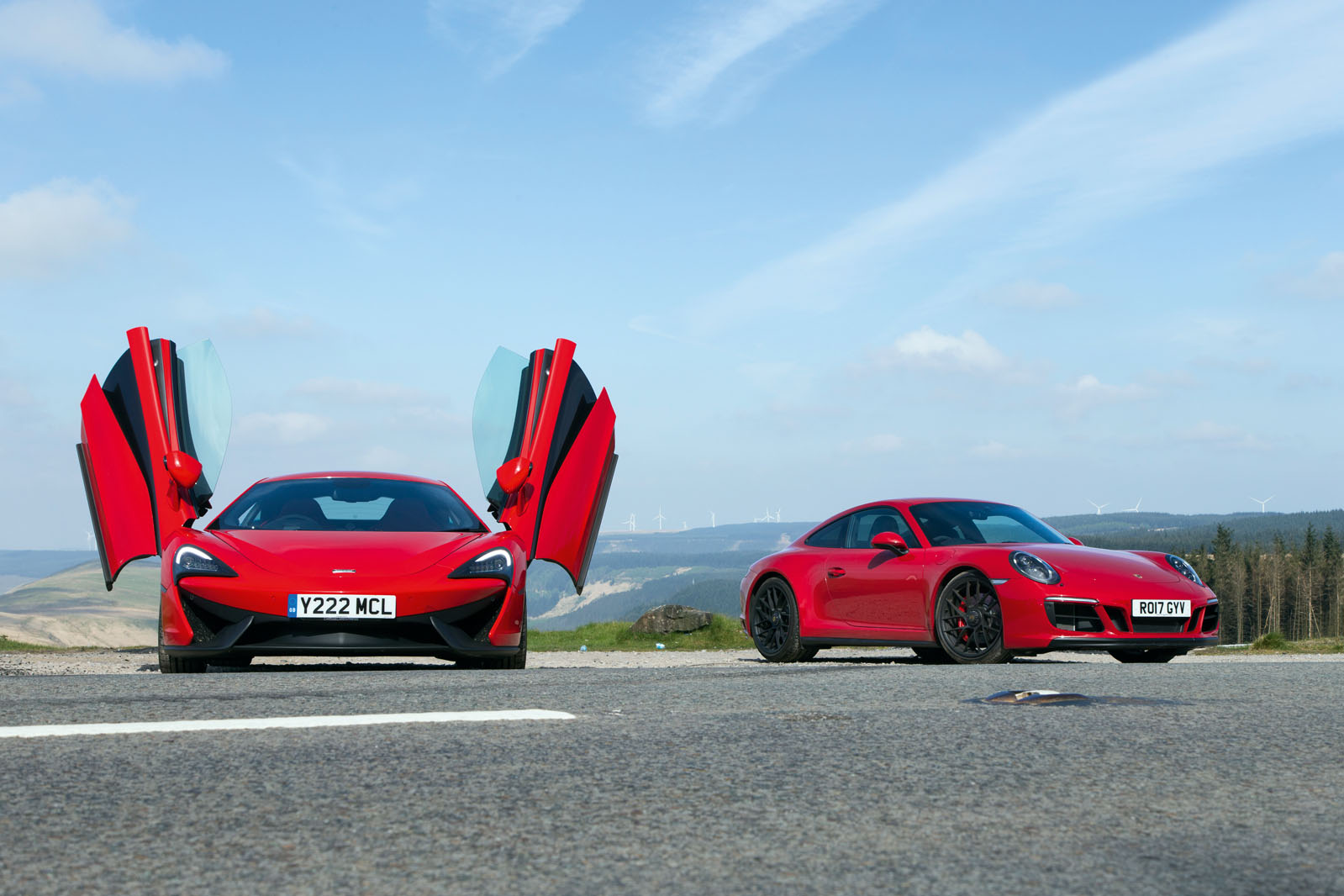 But however they got here, we believe the McLaren 540C and Porsche 911 GTS are the best sports cars in the business, at least by the rules of this contest. If we’d waited a little longer, the new 911 GT3 may have made a stronger case still, and you could argue the McLaren 570S should replace with 540C because technically it just nips under the price barrier. But you’d scarcely believe how little real-world pace the 540C loses and we doubt a 570S has ever actually been bought for less than £150,000, so the 540C it is.

One more thing: the cars are competing by themselves, but for their countries. We’re here to identify the greatest sports car-producing nation of all, and these are mere representatives; the best of the best, for sure, but examples nonetheless.

For such an extraordinary device, the 540C is the invisible McLaren. It was commissioned at a time when the company was a lot less confident about its future and place in the world than it is now and was  designed to ensure the company had something that could sell directly against the 911 Turbo. But it costs nearly £20,000 less than the 570S to buy, despite costing McLaren hardly anything less to build. Which is why there is no GT version of the 540, nor will there be a Spider. Given its time again but with the benefit of hindsight, doubtless McLaren would not have built it at all. 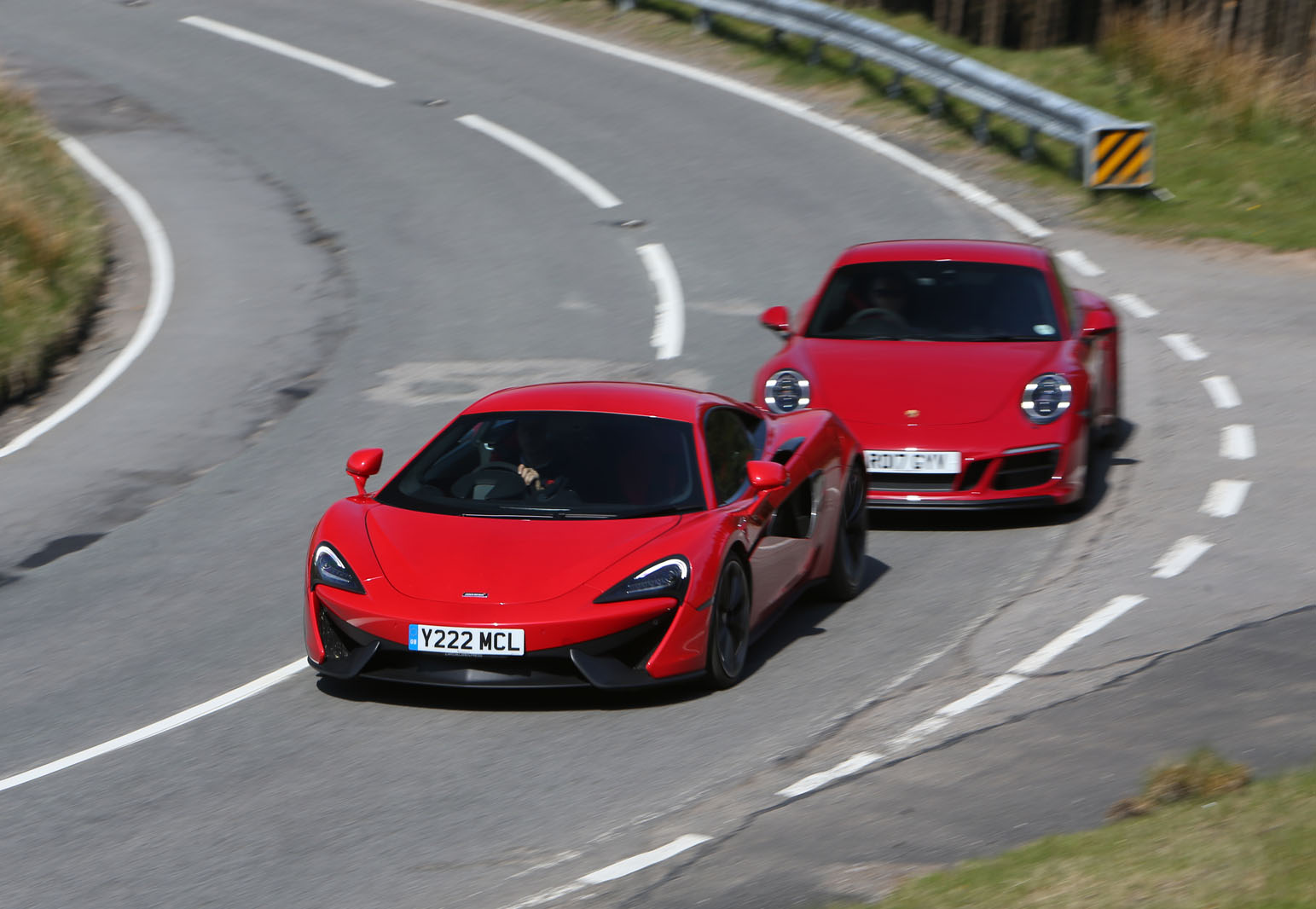 Which is exactly why it is such a bargain. The biggest difference between it and the 570S is that its engine produces 30 fewer horses, but because the 570S’s additional power is largely at the top end, you’re not going to notice what you’re missing unless you’re able to drive the wheels off both one after the other. Of course, we have done exactly this and it’s interesting to see what a difference that 30bhp makes, because even among cars with outputs in the mid-500bhp bracket, it is substantial; but unless you’re going to go redlining everywhere, the 540C does just fine.

And against the 911 GTS, where its advantage is closer to 90bhp, it offers a different category of performance. Don’t read too much into the 911’s 4.1sec 0-62mph time, because were you to equip it with a paddle-shift gearbox like the McLaren’s, that time would fall swiftly to 3.7sec, closer than you might think to the 540C’s 3.5sec sprint. But in reality, the McLaren really does feel much faster. It has more turbo lag, but when it kicks in a lower gear, it provides you with that uncomfortably hurtling feeling that is the hallmark of all exceptionally fast cars. And quick though the 911 is, it can’t quite do this.

But nor does it need to. Truth is (and we tried this, too), that so long as sane drivers are at the wheels of both cars, the GTS will sit neatly on the tail of the 540C from dawn until dusk. Sure, around a track, we’d expect the Brit to drive away from the German in short order, but in the always restrictive environment of even quiet moorland roads, both cars have potential to spare. The fact that the McLaren has rather more of it is really neither here nor there.

Nor can the McLaren make any subjective claim to powertrain superiority just because its engine has more cylinders. It is the Porsche engine that sounds better at all speeds and it is Porsche that provides a choice of two or three pedals in the footwell. And with a manual gearbox as good as that now used by Porsche, that is a sizeable point in its favour. Yes, the McLaren shifts gears pretty instantly in both directions and there is certainly pleasure to be had from the uninterrupted progress that results, but physically to use a lever to select the next ratio is always going to be a more involving process. And few levers find their way around the gate more sweetly than that of this Porsche. For a sports car, a pure driving machine, this stuff really counts. 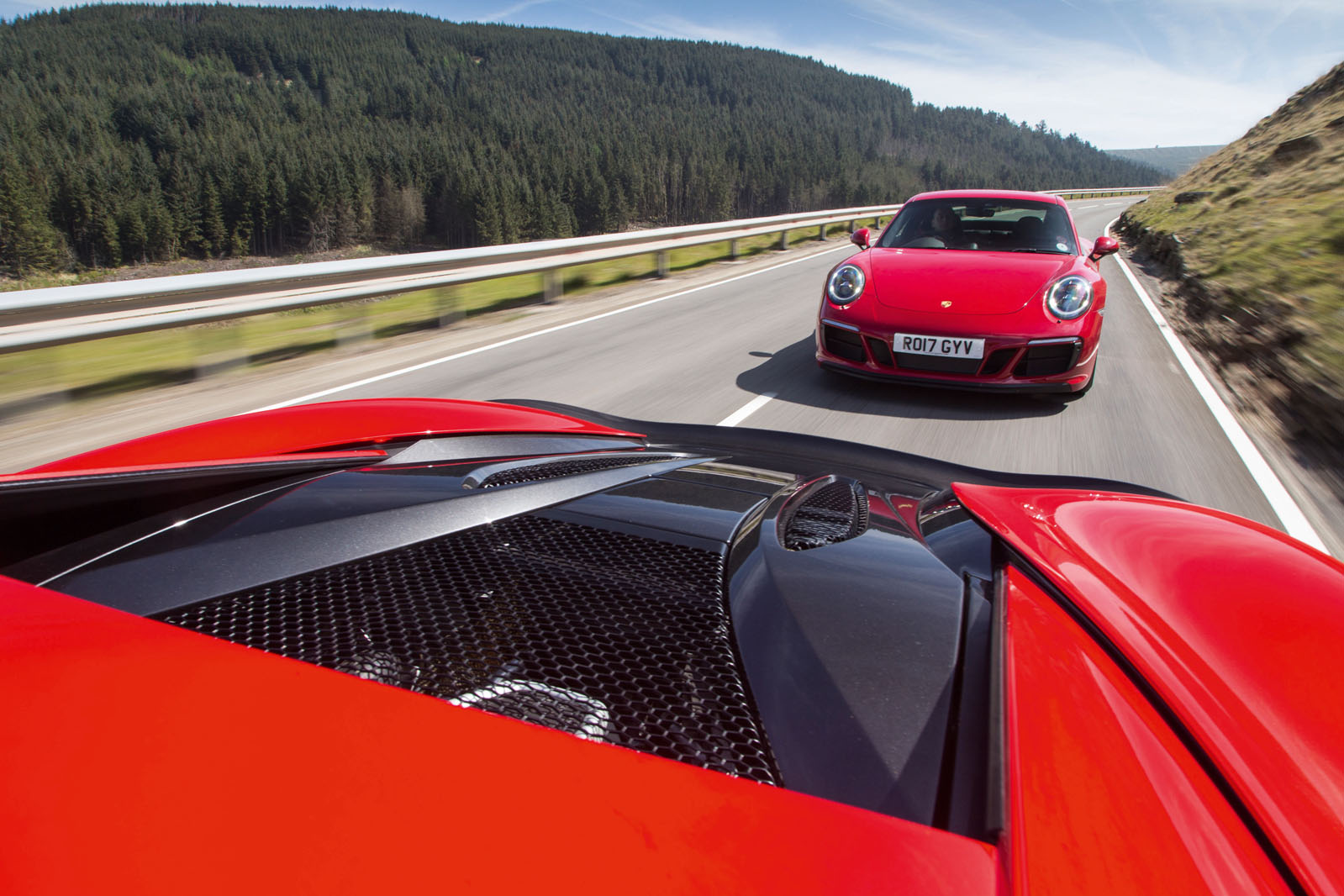 But so does the way a sports car feels in your hands. And, of course, the 911 is exceptional in this regard, especially in this lightest spec a GTS can be. Its steering is pin-sharp, its damping superlative. If you want to feel confident while driving a rapid car quickly, there’s no better place to shop.

On the other hand, if you want to feel like a superhero, you’re going to need the McLaren. Its handling is better than exceptional: it is incredible. Porsche abandoned hydraulic power steering years ago but McLaren proudly states it’ll be the last manufacturer on earth to embrace electric assistance. Drive the 540C on an undulating road and you’ll see why. The feel the helm provides, that sense of contact with the road it imparts, is such that when you jump back in the 911, it’s like you’ve donned a pair of thick gloves. It still does exactly what you want and when you want it to, but that level of communication is missing. You get more through the McLaren’s carbonfibre shell, too, its ultra-stiff construction providing the perfect platform for its exquisitely tuned suspension to work upon.

There’s also another thing, important even in the realm of the sports car. The McLaren feels special in a way the Porsche does not. Look at its stance, its styling, its partly exposed carbon shell, its low-slung driving position, its elegant yet futuristic interior design: all speak of an exclusivity, a quality of experience and a likelihood of retained memories the 911 cannot touch. Yes, we think this second-generation 991-series is one of the prettiest in 911 history, but it’ll take more than that, centre-lock wheels, a bit of Alcantara and a few GTS badges to bridge the gap – no, gulf – between it and the McLaren in this respect.

Yet other gulfs exist, too. Sports cars must also be usable, and while we applaud McLaren for giving the 540C a big boot, such exceptional visibility and (rubbish sat-nav aside) a pretty impressive ergonomic environment, it does not have 911-grade visibility, nor its ground clearance. It’s a little harder to enter and much, much harder to exit. You can’t thread it through gaps like you can the Porsche and, of course, it has no rear seats. By the standard of mid-engined exotics, the McLaren Sports Series (540/570) is probably the most practical and usable of them all, but a 911 it is not.

Which is why, were this a conventional twin test, we’d factor in the price differential and award victory, by the smallest margin, to the Porsche. Recently, we named the GTS our favourite car on sale and nothing we’ve seen here changes that.

But, as we know, these two cars are mere envoys, ambassadors for their countries. So which makes the best case for theirs to win the sports car world cup? Both are emblematic of the cars they do best. The Porsche is a version of a big-selling product and part of a model range that shifts nearly a quarter of a million cars a year. The likes of Audi, BMW and Mercedes-Benz are, of course, many times bigger still.

Conversely, McLaren is the ultimate expression of a culture of, and an appetite for, the purest of sports cars that is richer and longer lasting than any other in the world. But we don’t need to look back to old Triumphs, MGs and AustinHealeys here, because in addition to those that have already taken part in others, from Ariel past Morgan to Radical, those traditions live on today, faster, more pure, exciting and true to the sports car ideal than ever.

Which is why we’re giving the sports car world cup to England. The 540C may be only very nearly the best sports car in the world, but as an example of the kind of car that England does best and illustrative as it is of this island’s unrivalled record in this field, there is none better to come forward, step onto the stage and collect the award.

Dirty dancing in the street

Scroll across the row of pictures and the final two show the essential difference between these cars. The 911's rear is like a curvaceous, sexy, wiggling pair of cheeks in tight-fitting shorts. The McLaren's is an unsightly arse crack sticking out of a builder's jeans.

If driving a sports car may be likened to an intimate dance, I would rather feel the Porsche's rump writhing in my hands.

The adjective " invidious " applies to this comparison.
The McLaren 540C should be compared with the Porsche 911 GT3.
But there is no getting away from the fact that the 540C is one helluva supercar if this review is anything to go by ( although I can't take that dashboard seriously ).
RednBlue 11 June 2017

Chauvinism is an exaggerated patriotism and a belligerent belief in national superiority and glory. Whereas patriotism and nationalism may represent temperate pride, chauvinism is intemperate. It can be also defined as "an irrational belief in the superiority or dominance of one's own group or people". Moreover, the chauvinist's own people are seen as unique and special while the rest of the people are considered weak or inferior. It applies to cars too.
View all comments (8)