BACK TO ALL NEWS
Currently reading: Audi RS6 E-tron due as 600bhp EV performance estate
UP NEXT
New 2022 BMW 8 Series gets M-car makeover

As Audi gears up to launch its final internal-combustion car in just five years’ time, the race is on to transition its Audi Sport division into an electric-only performance brand.

Audi Sport’s portfolio of petrol and diesel cars is larger than ever before, comprising uprated S and RS-badged versions of every model in Audi’s ICE line-up except for the A1 Sportback supermini. The hot E-tron GT, however, remains its only electric RS offering. The hot versions of the E-tron and E-tron Sportback SUVs wear just an S badge and the division has yet to show more potent derivatives of the new Q4 E-tron and Q4 E-tron Sportback.

That trend is set to reverse rapidly in line with Audi’s wider plans to offer more than 20 electric models worldwide by 2025 and for electrified cars to account for 40% of its sales.

The RS E-tron GT offers a glimpse at Audi Sport’s electric future and indicates how its offerings will be differentiated from their regular counterparts.

Crucial to the transformation plan will be maintaining the variety and completeness of Audi’s line-up (which today comprises 17 model lines) to avoid losing customers along the way, so a near-direct replacement for every current model is on the cards. For example, the recently revealed A6 E-tron concept heavily previews the electric successor to today’s A6, and it will no doubt follow its predecessor in being offered with a performance range-topper tuned by Audi Sport.

Although the A6 E-tron isn’t intended as an immediate replacement for the A6, it will occupy the equivalent segment in the EV market, and Audi bosses have all but confirmed that an estate version is on the way, too.

All of which means the RS6 Avant is due an electric successor as well, continuing a model line that stretches back to the V10-engined C5 generation of 2002.

While the current C8-generation RS6 arrived two years after the standard A6, the RS6 E-tron could well be launched at the same time as the standard A6 E-tron in 2023, following the example set by the E-tron GT and RS E-tron GT.

The two are likely to be more closely matched in terms of design than the current A6 and RS6, too, given the subtle differences between standard and hot versions of current Audi EVs, so expect a slight toning down of the RS6’s flared arches, outlandish wheels and prominent rear spoiler.

The regular A6 E-tron will be the second Audi model to use the premium-focused PPE architecture for EVs that Audi is co-developing with Porsche (following the Q6 E-tron SUV, a sister model to Porsche’s Macan EV) and that will offer the flexibility of various drivetrain layouts and power outputs. 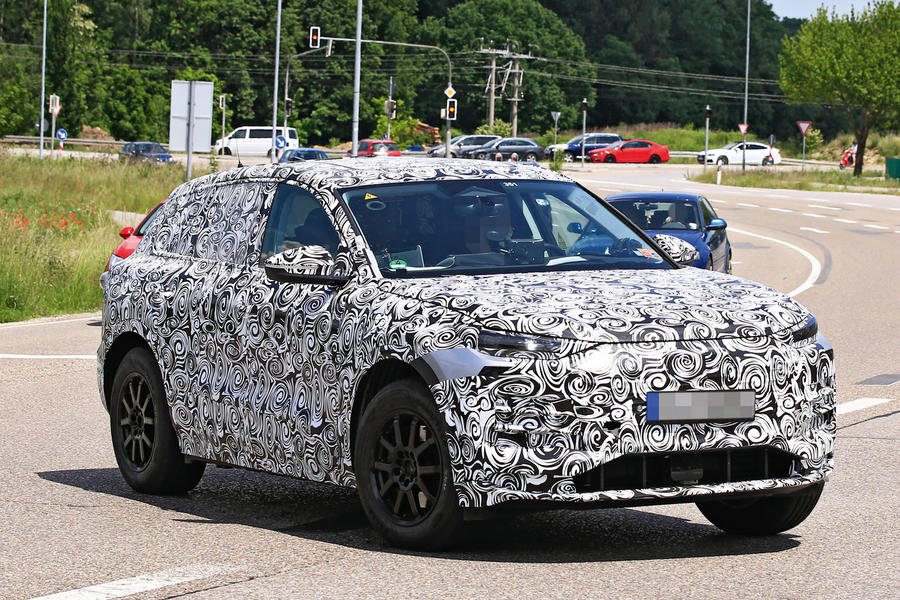 The A6 E-tron concept has one electric motor on each axle for combined outputs of 469bhp and 590lb ft – less power but exactly as much torque as the RS6’s 4.0-litre twin-turbocharged petrol V8.

The RS6 E-tron, meanwhile, will up the stakes to more viably compete with the full-bore performance EVs currently being developed by BMW’s M division and Mercedes-AMG.

Expect it to closely match the outputs of the top-rung RS E-tron GT, which packs 590bhp (or 637bhp in its ‘overboost’ mode) and 612lb ft to offset the inevitable added weight of its large battery pack, so a 0-62mph time of just over 3.0sec is highly likely.

It remains unclear, however, whether the PPE platform – an evolution of the J1 architecture used by the E-tron GT and its Porsche Taycan sibling – can accommodate any more than two motors. The E-tron S and E-tron S Sportback SUVs use a tri-motor set-up, but they sit on an adapted version of the MLB Evo underpinnings that are used by the Volkswagen Group’s largest ICE models.

As demonstrated by the A6 E-tron concept, the PPE platform can accommodate a 100kWh battery pack, which is good for a claimed range of more than 435 miles in this application.

The RS6 E-tron won’t be able to match that figure, but it will benefit from the PPE platform’s ability to accept rapid-charging rates of as much as 270kW, whereby it could gain up to 186 miles of range in just 10 minutes. Plus, because the battery pack itself is spread out across the cabin floor and the wheels are pushed out to the corners, it will offer comparable interior space and load capacity to today’s RS6.

Another highlight of the PPE platform is that it has been designed to underpin both SUV-sized and lower-slung models in the premium segment so offers full flexibility when it comes to wheelbase length and battery capacity.

Porsche is lining it up for use in a new compact sports saloon to sit beneath the Taycan, for example, but it could be shortened yet further to underpin an electric successor to Audi’s TT coupé, which is facing an uncertain future as it enters its eighth and final year on sale. 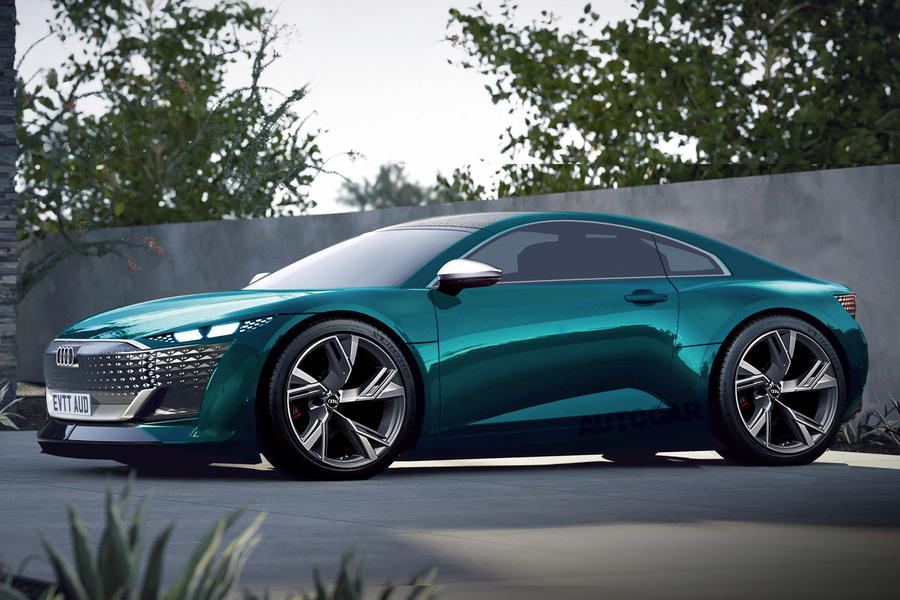 Just last year, Autocar reported that the TT and the R8 supercar could be culled from Audi’s line-up as part of a cost-consolidation programme instigated by CEO Markus Duesmann. But the PPE platform’s flexibility and the potential for a high degree of component sharing with other Volkswagen Group models could enable Audi to pursuea new electric two-door sports car.

Indeed, Audi bosses told Autocar in 2019 that the future of the TT was the subject of “emotional discussions” at a high level, as relatively low sales in the sports car segment threatened the likelihood of a replacement for the current third-generation model.

Porsche is working on its own E-core platform to underpin electric versions of the 718 Cayman and 718 Boxster, with the batteries stacked behind the seats to imitate the current mid-engined sports cars’ distinctive handling characteristics.

Any successor to the four-seat, front-engined TT isn’t expected to adopt such a set-up, making a shortened version of the flat-floored PPE platform a more likely candidate. This would allow for rear-driven and Quattro versions, as with the current model, and for a maintained dual focus on practicality and keen dynamics.

Back in 2014, Audi hinted at a jacked-up, four-door successor to the TT through the TT Offroad concept but, given that the similarly sized and shaped Q4 E-tron Sportback is now on sale, a gap has been left for the TT name to stay in the sports coupé segment, where it remains a consistently strong seller.

1980 Quattro: The first rally car to take advantage of the relaxed WRC regulations allowing four-wheel drive to be used, the Quattro won countless rallies and pioneered the layout used by many future title-winning cars.

1994 RS2 Avant: The genesis of Audi’s RS models, this quick yet practical Porsche- developed estate was faster from 0-30mph than the McLaren F1, thanks to its effective Quattro four-wheel drive system.

2002 RS6: Available as a sleek saloon or a roomy estate, the first RS6 set the precedent for Audi’s legendary Q cars. The limited-run RS6 Plus featured a 473bhp Cosworth-developed V8 that was good for 174mph.

2006 R8: Named after Audi’s Le Mans-winning prototypes, the R8 was the firm’s first proper supercar. Available with a V8 at launch and a V10 later on, it became a staple of the late-2000s supercar scene.

2021 RS E-tron GT: Audi’s first production performance EV and the most powerful road car it has yet produced, at 637bhp, the RS E-tron GT ushered in a new era for the brand’s sports cars.

RS6 E-tron ie. a Porsche Taycan made to look more like an A3 with the set-up of every other Audi but the one you have to go for because the Taycan's cabin looks like a Curry's and the resulting ergonomics are worse than every other Porsche. At least there's the Panamera, which is a great, somewhat more discrete, car with a great, timeless cabin and a best of both worlds powertrain.

I find it perverse that you can buy very quick (and expensive EVs) and yet when you see them on the motorways they are invariably driving slower than the normal flow of traffic. Presumably so as to not waste their precious range on inefficient high speeds.

I realise that good performance is a natural by-product of electric motors but I totally agree that smaller efficient and inexpensive EVs are what we need (not inadequate range Hondas or MINIs).

Andrew1 16 November 2021
I am glad they are keeping their iconic, vulgar, humongous grille. No, it's not useless, it's the brand image. Hopefully it will still have 4 fake exhaust pipes.