BACK TO ALL NEWS
Currently reading: Audi Q9 set for development as future Range Rover rival
UP NEXT
Analysis: Polestar lifts the lid on lifetime EV emissions

Audi’s growing SUV ranks are set to swell further with the addition of a new Q9 model in the future.

Audi launched the Q8 as its flagship SUV in Shenzhen, China, earlier this month (Autocar has since driven it). At the time, CEO Rupert Stadler refused to rule out the possibility of an even larger and more luxurious model to sit above it if the expected customer demand is there.

“The customers will tell us what they want in the future,” Stadler told Autocar when asked if Audi was planning a Q9. “Time will tell.”

Stadler has since been suspended from Audi's supervisory board, following his arrest as part of the investigation into the diesel emission manipulation scandal. Board member Abraham Schot has assumed the role of acting chairman.

The Q8 will be priced from around £65,000 when it’s launched in the UK this summer, but some versions are likely to top £100,000 when the range expands with higher-tech, sportier and more luxurious versions and buyers spec the cars up as expected.

Stadler confirmed a plug-in hybrid Q8 would join the line-up and said a high-performance RS version was likely. “I think the concept looks good,” he said when asked if Audi Sport will turn its attention to the Q8.

The marque believes a Q9 could offer something different from Land Rover, being as much about technology as luxury and status.

Any such a model would be difficult to make profitably. The Q2 is already one of the smaller SUV models on the market and, in the company’s eyes, the job of an entry-level Audi is well served by the A1, a second- generation version of which was recently revealed.

“I think we are well equipped with Q2 because this is already a premium product at the right price point,” said Stadler, when asked of plans for a Q1. “The A1 is our car for very young people. Possibilities below that get tighter.” 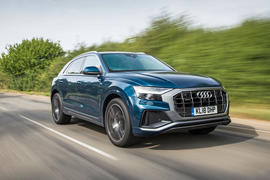 ”All the cargo capacity of a 40 tonne truck, but with the rugged SUV style and luxury our customers have come to expect.”

Mercedes should sell a 44t

28 June 2018
Mercedes should sell a 44t Actros with a large waterbed and a dancing poll in the trailer to finish this abysmal story.

Holly molly, I know SUVs are

28 June 2018
Holly molly, I know SUVs are the talk of town right now but are they really selling that many?! Crazy how many you see pop up everyday, for VAG the shared platforms keep the development costs down but calm down.

Holly molly, I know SUVs are the talk of town right now but are they really selling that many?! Crazy how many you see pop up everyday, for VAG the shared platforms keep the development costs down but calm down.

...its not just  more, but the margins they sell by. While the X5 and X6 ride on the same bones, BMW makes even more money on the X6, with just pennies of additional investment.  IMHO, though, it seems that the lab experiment that is the Bentley Bentegay, has been a success, yet with a few draw backs for the VW Group. Sales may be off the charts, but when compared to the Cullinan and Ranger Rover, it is much too small. Not having a larger SUV platform to accommodate a bigger vehicle and it being OUT OF THE QUESTION to create one just for Bentley, they twin the architecture with Audi to build the Q9, to rival the GLS, forth coming X7 and lower rung Range Rovers.  Who knows, perhaps the VW Group may even produce a SUV for Bugatti off of that platform?!

Yes! VAG have a real

Another week in jail....

As Rupert Stadler, Audi’s suspended chief executive officer, faces another week in jail in the on-going saga, one has to suggest that "time may tell" him that fewer fantasy press releases and more legally compliant motor vehicles might be a start in the right direction...

Simply outclassed before it

28 June 2018
Simply outclassed before it arrives. Nothing, nothing can compete with the Range Rover, it's the pinnacle of premium. Even a Bentayga or a Cullinan are inferior German copies of the original and still the best premium SUV. Audi and all the other Alemanni tribal upstarts shall be slain before JLR's feet like peasants.