BACK TO ALL NEWS
Currently reading: Alpine investigating hydrogen-combustion for future sports cars
UP NEXT
Spending 48 hours touring in a Ferrari Roma

French performance brand Alpine is "very actively" exploring the use of hydrogen as a means of safeguarding the future of the combustion engine, both in racing and in road cars.

The company recently collaborated with students at the European Institute of Design in Turin to create the radical A4810 concept - an outlandish vision of what an Alpine hypercar could look like in 2035, and hypothetically powered by hydrogen.

Whether the concept used a hydrogen-combustion engine or a more conventional hydrogen fuel cell arrangement was not clarified, but now Alpine CEO Laurent Rossi has given the first indications that the company is committed to keeping combustion technology in its portfolio, and hydrogen could be the key.

Speaking at Silverstone ahead of the 2022 British Grand Prix, Rossi told Autocar: "It’s only normal we look at parallel paths - and I say parallel on purpose; the idea is we want to find alternatives that are not necessarily incompatible with electrification, because electrification is – whether we like it or not – the future of automotive for at least 60-70% of the automotive parc.

“For the rest, it will depend on the type of usage, the characteristics, the features you want to have - I’m thinking LCVs with a high payload and fixed trips could afford to use different solutions, or high-output cars." 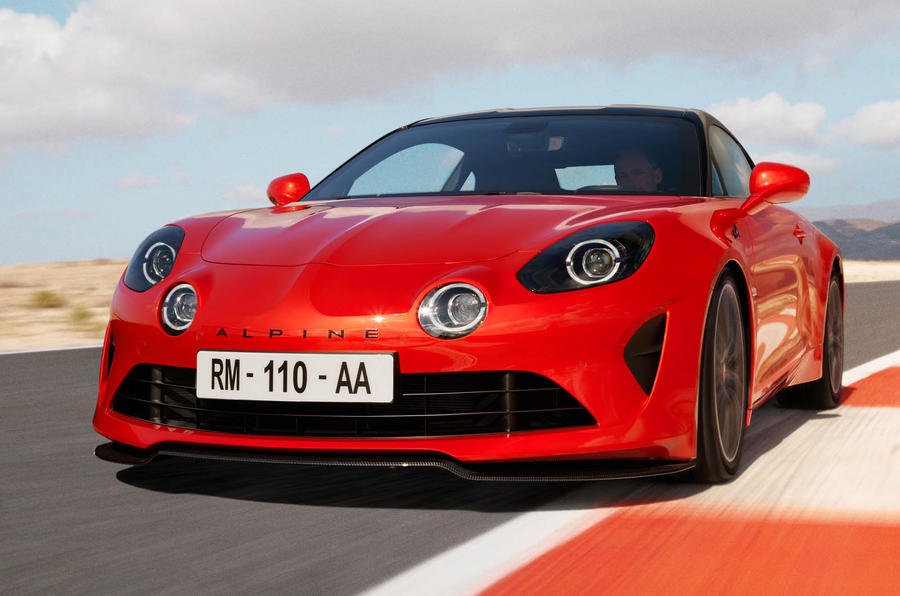 Alpine has previously been lined up for reinvention as an all-electric performance brand from 2024, confirming plans for a hot hatch based on the Renault 5 electric supermini, the larger 2025 Alpine GT X-Over and an electric successor to the Alpine A110 sports car. But Rossi's latest comments suggest combustion-powered sports cars could still play a role in the brand's line-up, going forward.

He said that in terms of future-proofing low-volume, 'high-output' sports cars, "sustainable fuels could be the solution".

"That’s good because the end-to-end industrial path for hydrogen will be compatible with electrification, so we believe that could be one way forward."

Rossi revealed that Alpine aims to showcase hydrogen-combustion technology in a racing car in the future, either in Le Mans or another discipline, and could even create a bespoke prototype – in the vein of Volkswagen's ID R electric racer – "that could take the Nurburgring record or things like that".

“We believe there might be a proof of concept that could be done, with hydrogen as a fuel, that could then later on translate into super high-performance cars, and why not Alpine road cars?

“We know that Le Mans is promoting hydrogen fuel cells, which is one step forward, but we want to go another step forward and use hydrogen as a fuel so we could use a V6 – a hybridised V6 – powered by hydrogen", he said.

Alpine's parent company Renault recently explored the potential of hydrogen for road cars with the Scenic Vision concept, which uses an innovative range-extender powertrain comprising a 215bhp EV motor and a 40kWh battery which can be topped up on the move by a 15kW hydrogen fuel cell.

Hydrogen-combustion, meanwhile, has yet to be used by any manufacturer for a series-production car. The most vocal proponent of the technology is Toyota, which extols the cost benefits of using existing combustion technology in zero-emission cars and has shown that both the Toyota GR Yaris's 1.6-litre three-cylinder engine, and the Lexus RC F's 5.0-litre V8, need only light modification to run on hydrogen.

STOP using up our Air. Air is not free. Air is not unlimited. Air is not garbage gas. Air does not belong to you. Our descendants need Air to stay the way it is. What is the existing volume of Air at one bar?  Now STOP your nonsense.

Hydrogen, we've discussed this before, yes, we could keep the ICE power, but ,from source to Car the costs and logistics aren't cheap, but then again it looks like EV costs will/are going to go up for various reasons like lost Tax revenue etc, and hopefully charging an EV will become ICE car quick, that the charging infrastructure in a few years has got its act together ( well, according to Shell's Tv add it is) then Ev's the way to go, let's hope EV cars don't get too pricey to buy.