BACK TO ALL NEWS
Currently reading: Alpine A4810 concept is a hydrogen hypercar for 2035
UP NEXT
Lotus Emira vs Porsche 718 Cayman

The stunning new Alpine A4810 concept is an intriguing vision of the zero-emission sports cars the French brand could be building in 2035.

Described as a 'super-berlinette', the concept is the work of transportation design students at the Turin-based Istituto Europeo di Design, who were briefed in autumn 2021 by Alpine to create a concept that at once "embraces the latest-generation technologies" while nodding to the brand's trademark characteristics. IED students have previously created concepts in partnership with Suzuki, Hyundai and Pininfarina.

Beyond its outlandish, future-looking design, the A4810 is notable for its adoption of a hydrogen-fuelled drivetrain - a first for the Renault-owned performance brand. Its creators have not said whether this takes the form of a conventional fuel cell electric set-up or a hydrogen-combustion system, but a pair of what appear to be chunky exhaust outlets seem to suggest the latter.

Either way, this marks a radical departure from the current Alpine Alpine A110, which uses a petrol-fuelled four-cylinder engine, and its upcoming crossover, grand tourer and sports coupé, which have all been confirmed to use a battery-electric drivetrain. 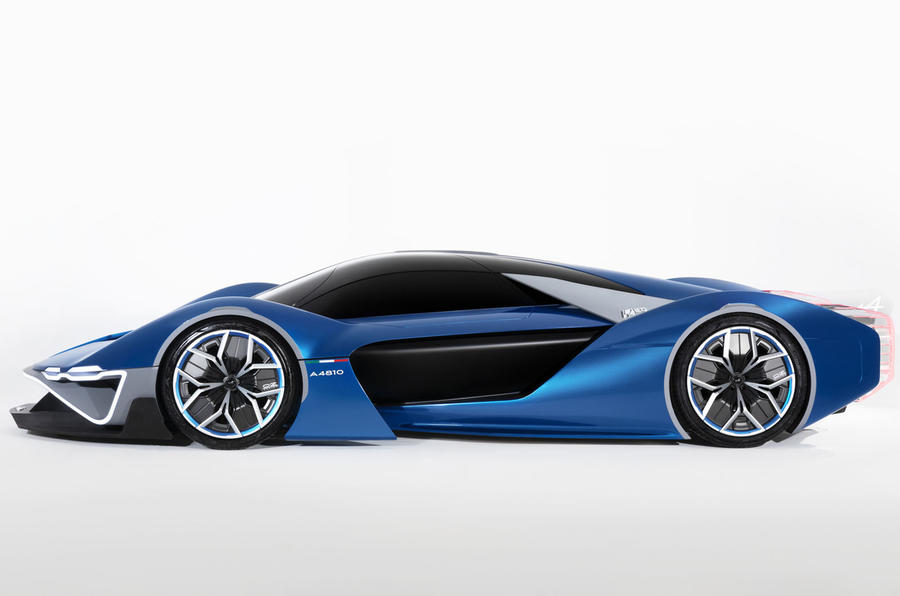 Notably, parent company Renault recently previewed a separate concept crossover that's said to have a "hydrogen engine", suggesting that the French company could follow Toyota in using hydrogen as a means of preserving existing combustion technology.

As an overtly futuristic proposal, precise details of the A4810's technical make-up and performance potential have not been given, but the IED says the car is "light yet powerful and agile", with a focus on providing "pure driving pleasure" - characteristics familiar from the A110.

It measures 5091mm long, 1055mm tall and 2010mm wide, which makes it substantially larger in all directions than the A110, but its designers have sought to "visually lighten" the design and implement aerodynamic solutions inspired by Formula 1.

The A4810 has not been said to preview any production car, either before or after 2035, and is likely to be destined to remain a design study. But it may still hold clues for future sports cars to come from Alpine as the brand moves away from conventional combustion technology.

The manufacturer's chief designer, Raphael Linari, said it "explores new territories for the brand in terms of package, proportions, and design language" and the solutions achieved by the students present "very interesting answers".

Pity they didn't develop the lines of the existing Alpine.

H2 clearly a nod to econess, though they might as easily made it a Tesla-style EV.

As impressive for design students to collaborate with  companies to make a static concept out of 3d printers from CAD renderings, saying that is an hydrogen car has the same veridicity as saying it's powered by a capacitor flux and mr. fusion.

As correctly said by bol , this is a design excercise but as engineering side this would be difficult to realize as you need to take account of the space for the big fat hydrogen tanks (and here I remind again that the hydrogen colorolla had to sacrifice half of the cabin size for the tanks to ensure 30 miles of range).