So slick are the cars that it’s easy to forget Alpina is barely out of nappies when it comes to sales volumes – especially when compared with BMW, the company with which Alpina has indelible historical ties and on whose products those slick cars are based.

It’s an almost microscopic sum that makes those machines rarer than any mainstream supercar, but to Alpina, it represented a cornerstone of the firm’s revenue and meant a successor simply had to be built, even in the face of rapidly deflating demand for diesel power in Europe. And that’s what the ‘D’ in D3 stands for: diesel.

That successor has now arrived in the UK, the G20-generation-based D3 S, albeit tested here in G21 Touring guise. But for the badges on the bootlid, it is outwardly identical to the petrol-powered B3 (B for ‘benzin’) of five-star road test fame, with subtly draped skirts and bumpers, and the option of forged 20in multi-spoke wheels, which our test car has.

However, starting at around £55,000, the D3 S costs much less than its M division-engined, AMG-rivalling sibling and instead goes up against the recently dieselified Audi S4 Avant and… not much else, actually, unless you include the very entity whence it came.

Every D3 S starts life as an M340d xDrive, but then morphs considerably. First and foremost, BMW’s 3.0-litre mild-hybrid straight six receives an Alpina-specific cooling system, with two external radiators and an enlarged intercooler and fan.

The result is 350bhp and an elephantine 538lb ft – figures that are 15bhp and 22lb ft up on the M340d xDrive and also surpass those of the V6 Audi, although fuel efficiency drops from 44.8mpg in the BMW to 37.2mpg for the Alpina.

Elsewhere, the driveshafts have been reinforced and the chassis shares the same revisions as the scintillating B3: greater camber for the front wheels, bespoke spring and damper units, bigger brakes and Alpina’s own calibration for the torque split between axles, limited-slip differential and steering. 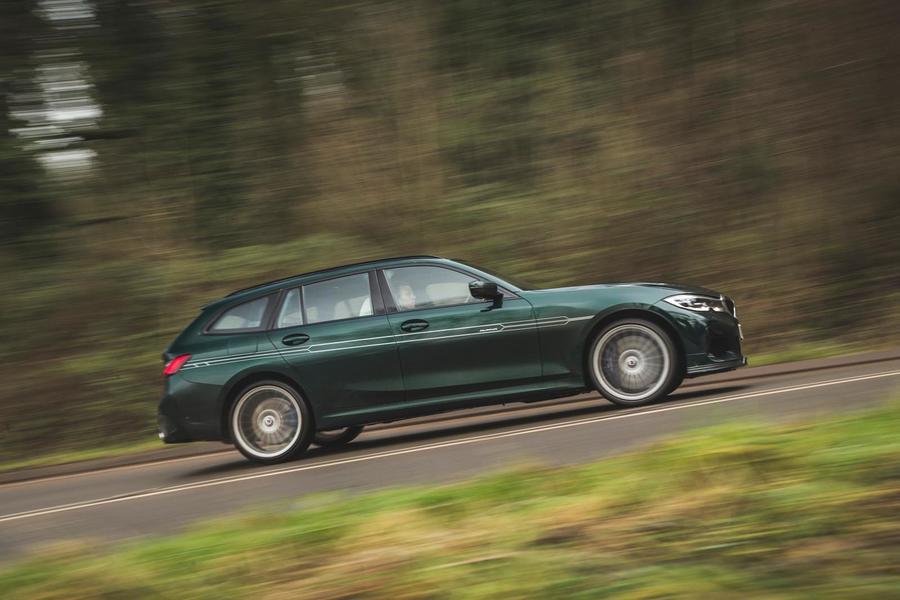 As ever with Alpina, the intention is to maximise stability, usability, performance and driver confidence, with a side order of exclusivity. And all of these aims the D3 S largely achieves. In terms of the flow of weight and feedback from the road surface, the steering is a cut above the typical BMW fare. The car is brilliantly accurate for a sizeable family estate and, in combination with the torque on offer, your sense is of a 1700kg car, rather than one weighing the claimed 1935kg.

Part of that perception is due to how relentlessly strong this latest Alpina turbo diesel straight six feels. Push the pedal and there’s an immediate pulse of torque from the 48V electrical system. Thereafter, only a slither of lag sits between you and the full might of 568lb ft, which carries you off into the distance without hesitation. Few if any cars of this type are so effortlessly quick in the real world, not least because the shift strategy for the eight-speed gearbox is also obviously tuned by people who love to drive, rather than by computers and for the benefit of laboratory-based efficiency tests.

Reservations? There aren’t many. Ride quality is generally very good, although on rougher surfaces perhaps the faint chassis fidget and road roar that are acceptable in the supercar-quick B3 slightly undermine the diesel’s raison d’être. The nature of its torque-rich powertrain means the D3 is implicitly the more laid-back device, yet you can feel that this chassis tune was developed first and foremost for the 456bhp, 190mph petrol. Sticking with the regular 19in wheels would help in both respects, admittedly.

On the move, there’s also less that differentiates the D3 S from the M340d xDrive than there is the B3 from the M340i xDrive, although at around £9000 the premium is also smaller. 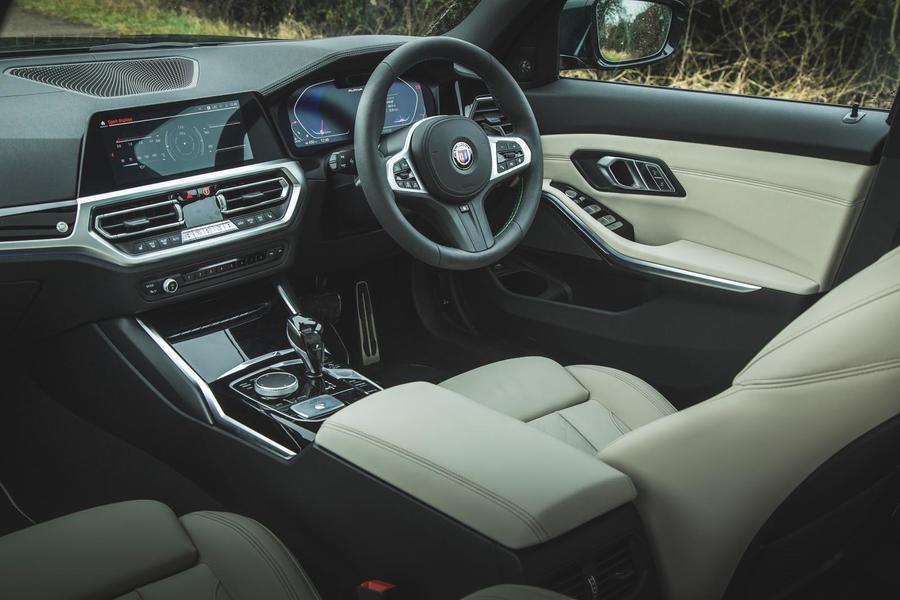 Frankly, the comparison is unfair. In terms of driving satisfaction – everything from brake pedal feel, to chassis adjustability, to its composed and reassuring gait – the Alpina skins its only true rival, the Audi, alive.

It remains the class of the sporting diesel field. 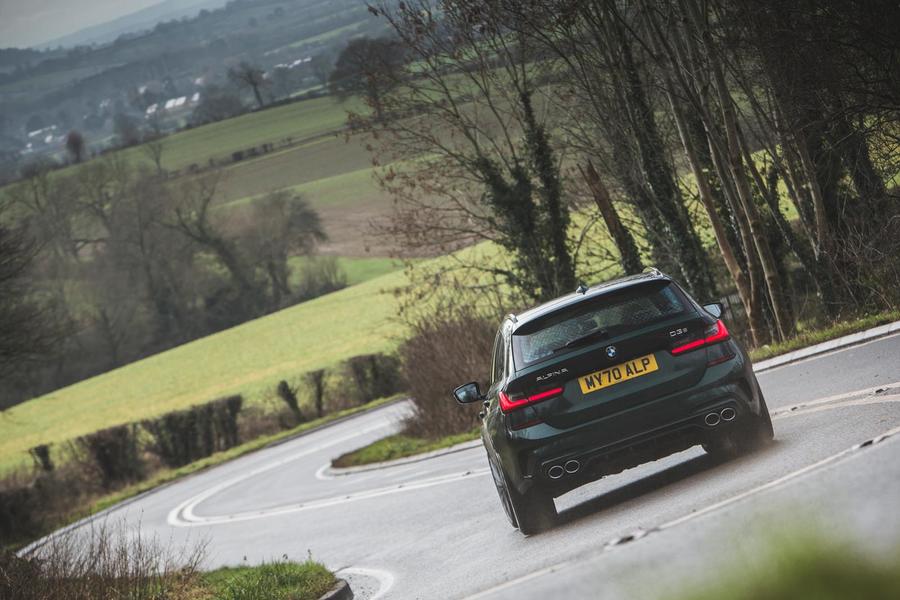 Much as I love the idea of an Alpina, I really think this one is missing the point. With diesel sales dwindling in the face of full hybrids (I don't get mild hybrids at all) and EV's, it seems perverse to be producing a heavy, sports diesel estate with compromised ride and compromised economy.

For me it would be a choice between an Alpina B3S or BMW's own G21 330e with a tune that matches the 350bhp output of this and similar kerb weight, but more economical, lower emissions and £10k cheaper.

Cobnapint 2 February 2021
@xxxx
Ermmm, what's the top 10 got to do with the price of bread?
And when was the last time you went out in a modern diesel?....they aren't noisy and they don't smoke.
xxxx 3 February 2021

@xxxx Ermmm, what's the top 10 got to do with the price of bread? And when was the last time you went out in a modern diesel?....they aren't noisy and they don't smoke.

Because for some reason your comments points out this Alpina can turn aorund the fortunes of diesel car sales. Give your modern diesel 10 years of use before it smokes and they are noisey from day 1 compared to petrol.

Much better if you use the queens English.

A 'Slither' of lag eh? Is there a snake driving the car? Or surely you mean a Sliver of Lag. Heavens and I thought only twitter users and teens get it wrong. But no, journalists too

Much better if you use the queens English.

A 'Slither' of lag eh? Is there a snake driving the car? Or surely you mean a Sliver of Lag. Heavens and I thought only twitter users and teens get it wrong. But no, journalists too