BACK TO ALL NEWS
Currently reading: 454bhp BMW M3 CS due for 2018 launch
UP NEXT
Worth the weight? Lotus Emira first ride

BMW will launch the most hardcore series production M3 yet in spring 2018, with the new model set to be the definitive version of its F80-generation super-saloon.

The M3 CS has been photographed testing at the Nürburgring Nordschleife, where it is expected to be launched next year ahead of the circuit’s 24-hour racing event. BMW will compete in the Nürburgring 24 Hours, which runs during 12-13 May next year, with the M6 GT3.

The M3 CS will follow the M4 CS in receiving a 10bhp boost for its turbocharged 3.0-litre straight-six S55 engine, bringing its maximum output up to 454bhp. The redline will be raised to 7600rpm and torque is also due to peak higher at 442lb ft – 37lb ft more than the M3 Competition Package. The rear-wheel-drive car will feature a seven-speed twin-clutch automatic gearbox. 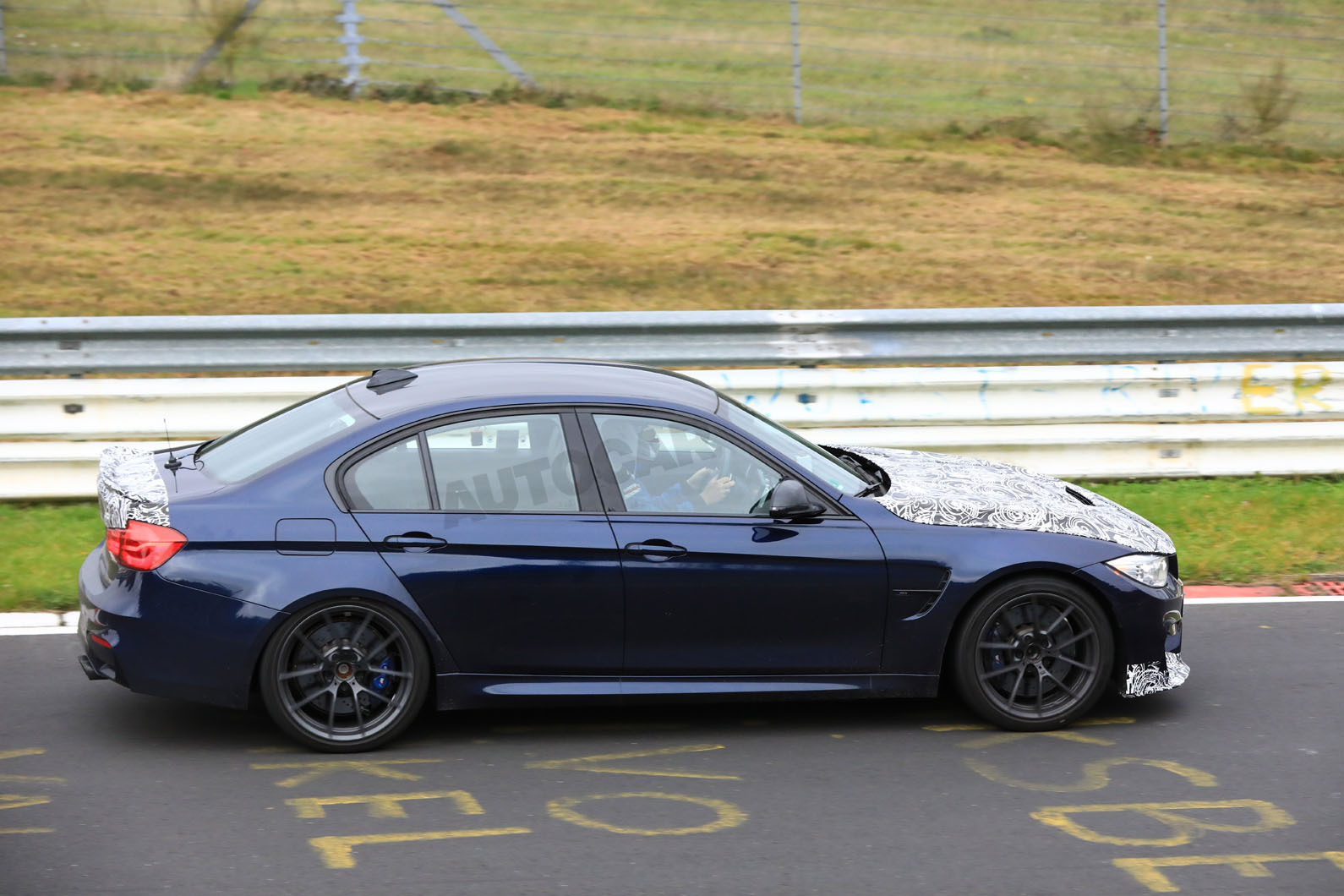 The reveamped drivetrain should benefit from a freer-breathing exhaust system similar to the one fitted to the M3 Competition with less sound deadening.

The CS will undergo a weight loss programme compared with the regular M3, with lightweight carbonfibre-reinforced plastic bonnet, carbon rear diffuser and fixed-height front splitter. Inside, there will be thinner door cards and a lighter stereo, which combine to cut around 35kg from the Competition Pack’s 1560kg weight.

The improvements will help trim the M3 CS's 0-62mph sprint time to about 3.9sec – three-tenths better than the M3 Competition. The electronic limiter that restricts the M3 to 155mph will be removed, raising its top speed beyond 170mph. 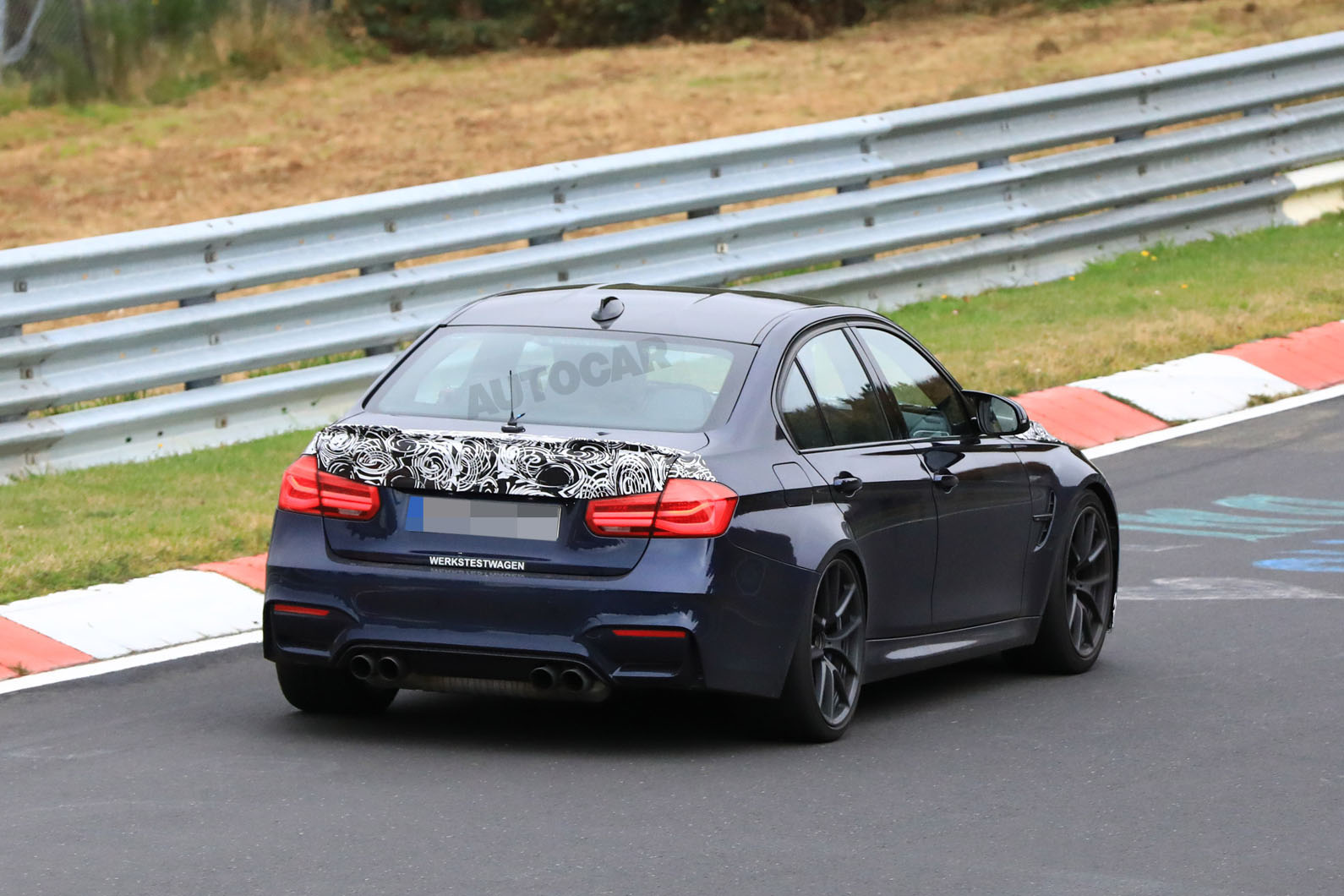 The M3 CS will sit on an adjusted version of the M3 Competition’s suspension to offer sharper responses, with 10-spoke forged wheels shared with the M4 CS that come wrapped in Michelin Pilot Sport Cup 2 tyres. Optional carbon ceramic brake discs, also shared with the M4 variant, will be offered.

The M3 CS will be priced to sit above the M3 Competition Pack, likely around £85,000. This price would make the CS £23,420 more than the Competition Pack but about £4000 cheaper than the two-door M4 CS. Unlike the M4 CS, which sits below the M4 DTM and M4 GTS models, the M division is not expected to produce a higher-ranking version of the M3. 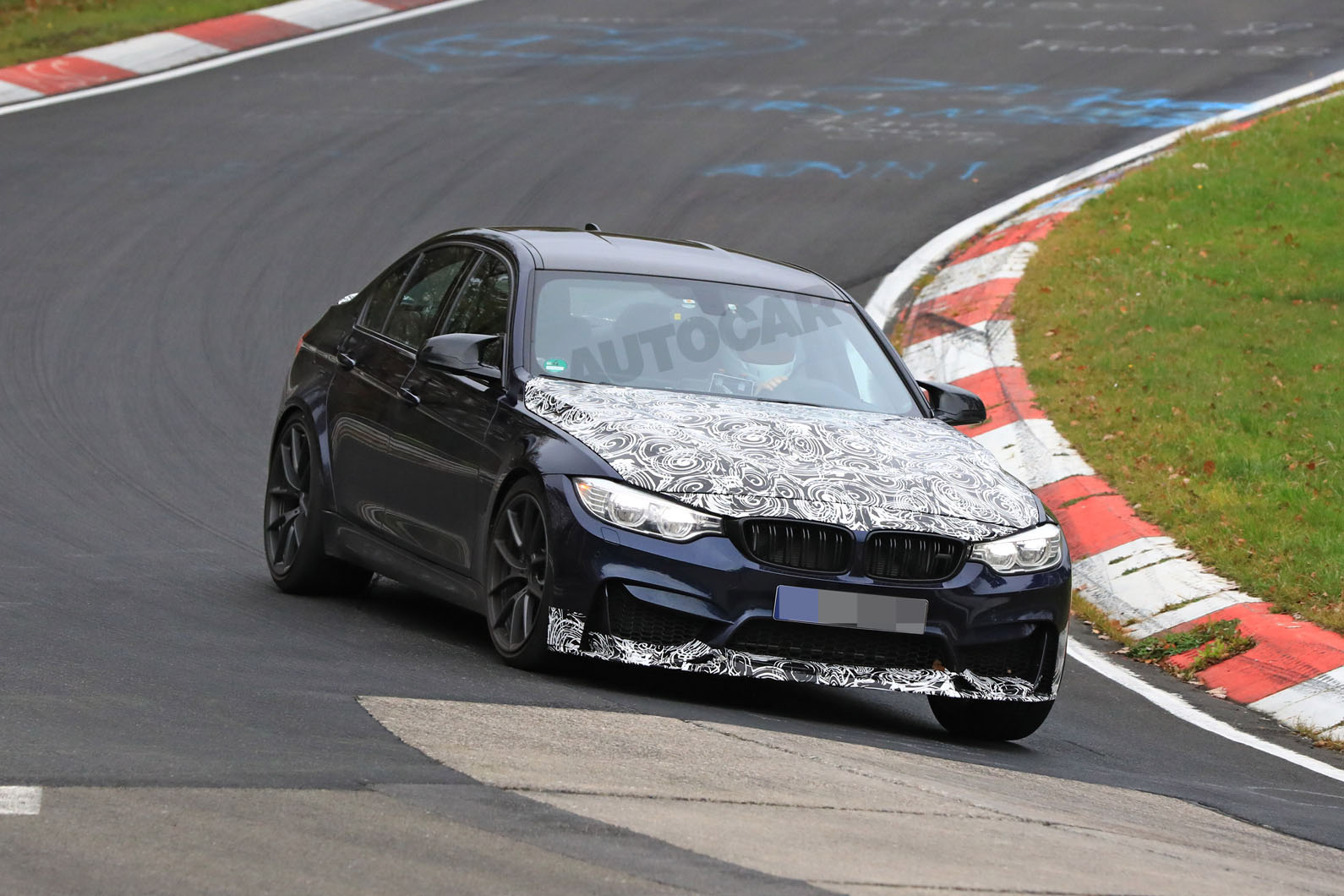 Although BMW refrained from commenting on the M3 CS when contacted by Autocar, the ‘werkstestwagen’ - ‘factory test car’ in English - decal on the rear of the spotted development car backs information that it is the CS prototype being used by the M division. The performance arm has a base at the Nürburgring, where all of its road and race machines are developed and tested.

BMW will use the CS moniker on an upcoming version of the M2. However, that car will have an even harder-edged performance focus with extreme light-weighting, so will be named the M2 CSL, with the L representing ‘lightweight’. It is unlikely that an M3 CSL will be produced because of the car’s heavier, four-door bodystyle.

Another to add to a long line of faulty BMW M3 engines...

"BimmerBoost wrote an article last month detailing the crank hub issue with the S55 3.0 liter turbocharged I6 motor under the hood of the BMW F80 M3 and F82 M4. Additionally, BimmerBoost contacted BMW for comment on the issue and if they plan to address it and so far BMW chooses to remain silent.

"It's typical BMW arrogance. It would be amusing if BMW did not make it a habit of screwing up M3 production engines. They have created a tradition of engine defects. The past three generations of M3 models all suffer from some sort of engine issue from the factory.

"We will not rehash the previous article on the topic but it is important to note BMW refuses to even acknowledge the issue. Motors are being replaced by dealers and there is plenty of evidence of this on any BMW forum.

"BimmerBoost asked BMW almost a month ago about this issue and sent the e-mail to multiple BMW sources. Every single one of them has refused to comment thus far. It's the S54 cover up all over again."

Because they look good, sound great and are superfast.
I will always consider the M, AMG, RS, N etc performance versions first before the regular cars even though that means I can only change car several years after buying one as those are quite a financial commitment.
I dont care about running costs because I do few kms a year and even a regular drive to the supermarket can be exciting in those, nevermind the fun you can have on B-roads.

As I huge fan of Motorsport, specially rally, I will always like these specific cars for bringing an extra race spec finesse for the road.

To me the "Big 3" are Audi RS,BMW M, and M-B AMG.have owned AMG, currently have an RS Audi,and considering going for the hatrick with an M BMW.Friend recently got an M4 GTS.and 1 drive in that will convince any Petrolhead it is worth the money.Even Burbling around the city in my C63 or TTRS+ is a joy.Just about to order an RS3 for my wife to replace her X1.With Quattro the figures for the RS3 are hard to beat-0-60 3.5,0-100 8.7,1/4 mile 11.9.[Car&Driver].So faster than this M3CS will be.I love the minimalistc interior it will have,I mean who needs 10 speakers in a car stereo, or a sunroof! I would pay more for less,like most petrolheads.Oh yes I will have CCB,Sport suspension, sport exhaust,etc, the things that really matter.Life is short, enjoy it !!

Thanks.  But when you consider all the speed humps, that the average speed in a town is now 16mph, the 20mph zones around schools, 20mph coming to roads around you very soon, congestion, speed cameras, very often 50mph on motorways now - as they very slowly turn them into 'smart' motorways (not!), the dangers of driving a car like that on B roads that are no longer fit for sports cars (thanks to potholes, foreign drivers, and the crazy elderly - who just refuse to stop using their cars even though they have clearly lost the plot)... then I really, completely, fail to see the point.

Completely understand, that is why there are several options for several tastes, everyone thinks differently and thankfully the market is not short on options that catter to those choices.