BACK TO ALL NEWS
Currently reading: 302bhp Mercedes-AMG GLB 35 compact SUV arrives at Frankfurt
UP NEXT
How the Bugatti Chiron became the first 300mph road car

The Mercedes-AMG GLB 35 performance SUV has made its public debut at the Frankfurt motor show, prior to going on sale in the UK in early 2020.

The SUV is the fourth AMG model to receive the 35 treatment, following the recently introduced A35 4Matic hatchback, A35 4Matic saloon and CLA35 4Matic coupe, and continues the rapid expansion of compact cars in Mercedes' performance car division. It’s also the first compact model from AMG to offer the option of both a five and seven-seat interior layout.

All the news and announcements from the Frankfurt motor show 2019

Like its stablemates, the GLB 35 4Matic is powered by an AMG-fettled version of parent company Mercedes-Benz’s M270 engine. The turbocharged 2.0-litre four-cylinder petrol unit delivers 302bhp at 5800rpm and 295lb ft of torque between 3000 and 4000rpm.

This represents an 80bhp and 37lb ft increase on the existing range-topping GLB model, the GLB250 4Matic, which uses a less highly tuned version of the same engine. By comparison, the BMW X2 M35i xDrive’s turbocharged 2.0-litre four-cylinder petrol engine matches that 302bhp, but develops 37lb ft of torque more than the GLB 35 powerplant.

Power is sent through an eight-speed dual-clutch gearbox with a Race Start function and multi-plate clutch four-wheel drive system capable of apportioning up to 50 per cent of drive to the rear axle. Five different driving programs are offered via AMG’s Dynamic Select system: Slippery, Comfort, Sport, Sport+ and Individual. 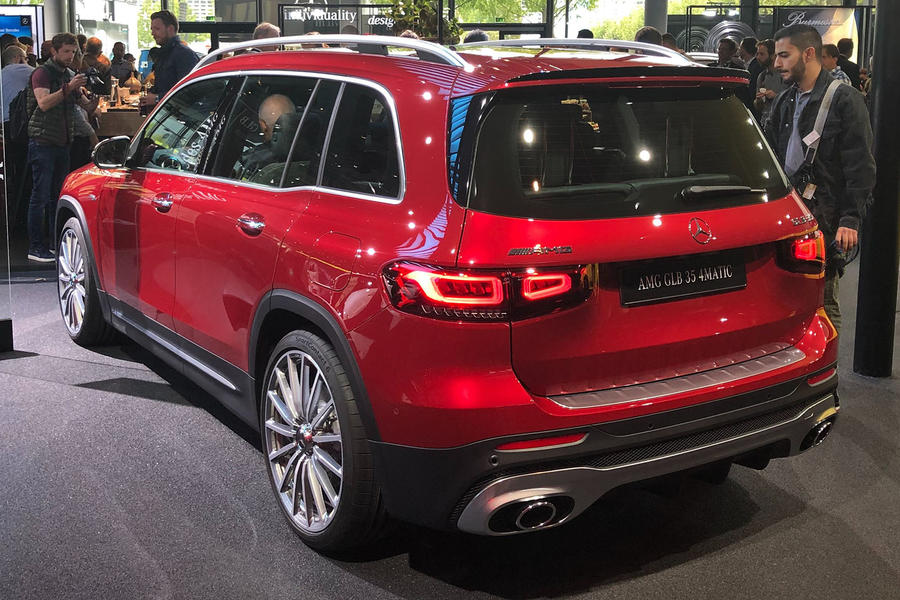 Further upgrades centre around the brakes. They use 350mm discs up front in combination with four-piston calipers and 330mm discs with single-piston floating calipers at the rear.

Mercedes-AMG is yet to reveal a kerb weight figure for the GLB 35 4Matic, though it quotes a 0-62mph time of 5.2sec and an electronically-limited top speed of 155mph. It has also confirmed an official fuel economy figure of 37.7mpg and CO2 emissions of 171g/km.

The new 4630mm long SUV is underpinned by a McPherson strut front and multi-link rear suspension. It receives a number of upgrades over the suspension used by standard GLB models, including new steering knuckles and transverse control arms at the front as well as redesigned subframe and revised wheel carriers at the rear. Buyers can also add an optional AMG Ride Control set-up with electronically controlled damping and the choice of three levels of firmness: Comfort, Sport and Sport+.

The latest addition to the AMG line-up is the first of two GLB models. An even more powerful GLB45 4Matic, packing up to 416bhp and 369lb ft in top-of-the-line S form, is also planned to see UK sales in 2020. 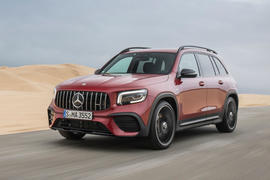 Versatile and spacious GLB gets the AMG treatment, putting it largely unopposed in the compact seven-seat SUV segment

The GLB 35 4Matic is differentiated from standard GLB models by a Panamericana style grille – the first time it has been used on a 35 model – within an AMG specific front bumper. Additional styling changes are concentrated around the rear end, with a prominent spoiler atop the rear tailgate and a reworked bumper featuring an aluminium look valance, housing two AMG-inscribed tailpipes and an integrated diffuser element. The standard wheels are 19-inch in diameter, with 20 and 21-inch rims available as optional equipment. 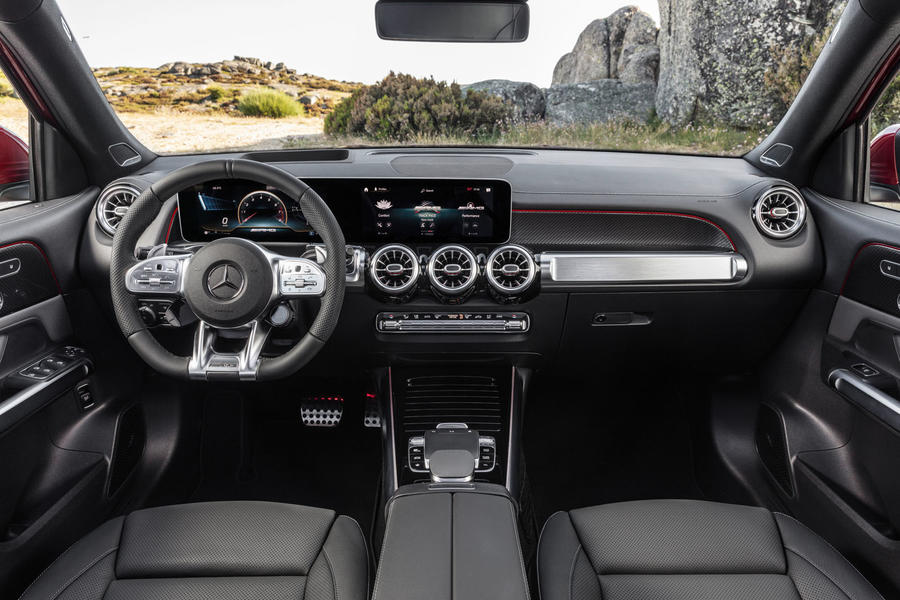 Inside, the new AMG model uses Mercedes' MBUX operating system. It works in combination with standard digital instruments and an infotainment display, both housed within a single panel within the top of the GLB 35 4Matic’s dashboard. The instruments can be altered across three different themes: Classic, Sporty and Supersport – the latter providing AMG specific car data.

As with other GLB models, the GLB 35 comes as standard with a five-seat interior layout. Buyers can also opt for an optional seven-seat layout with a third row of seats that consists of two individual seats and fore-and-aft adjustment of the second seat row.

The GLB 35 4Matic is produced on the same production line as other GLB models at Mercedes' factory in Aguascalientes, Mexico. At the time of writing pricing for the UK market had not been divulged.