BACK TO ALL NEWS
Currently reading: 2024 Piech GT is retro sports EV with 600bhp and 311-mile range
UP NEXT
Ford Kuga drops diesel option due to falling sales

More than two years after showing its Mark Zero concept car at the Geneva motor show, Swiss start-up Piëch Automotive has begun testing its first production car ahead of a market launch in 2024.

The outfit was founded in 2019 by Toni Piëch, a son of the late Volkswagen Group chairman Ferdinand Piëch. It plans to ultimately offer its new electric sports coupé in Europe, China, the US and various other global markets and will eventually follow it up with an SUV and the Sportlimousine saloon based on the same modular architecture.

The Mark Zero concept has become the GT and despite the name change remains largely faithful to the low-slung sports coupé shown in Switzerland, with Piëch promising that its “timeless” design means it “is not bound by any consumer cycles”.

It remains a two-door two-seater with a cab-rearward silhouette and a distinctive Kammtail-style rear end, measuring 4432mm long by 1991mm wide and 1250mm tall – not dissimilar proportions to the Porsche 911.

The EV’s powertrain, however, “has received a significant innovation” over the last two years. With a trio of motors (two on the rear axle and one on the front), the GT packs a combined 600bhp for a claimed 0-62mph time of 3.0sec. 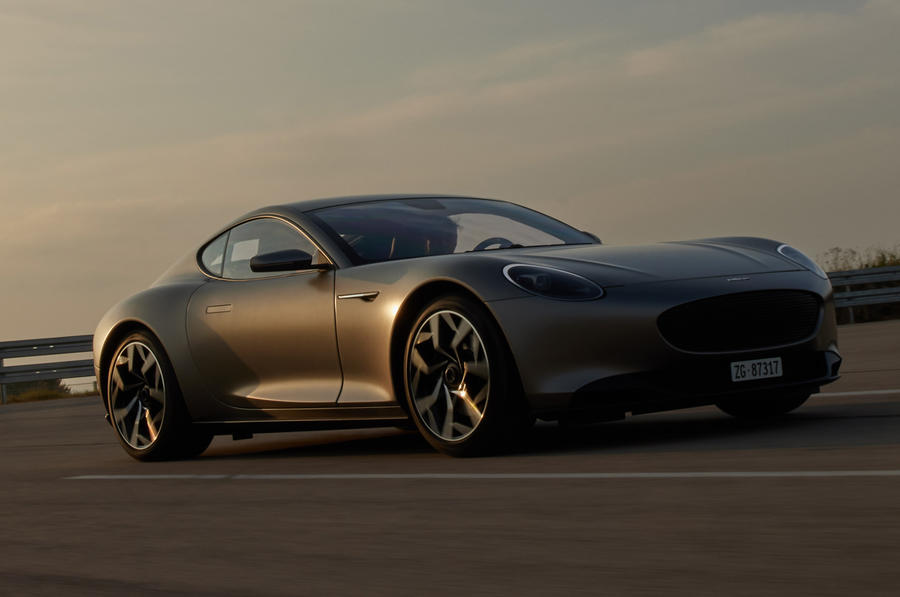 More significantly, however, the GT is promised to have “typical sports car handling”. The batteries are arranged in a T-shape across the rear axle and down the centre of the car for optimum weight distribution and a low seating position and allegedly “precise handling with immediate feedback to the driver”.

Crucial to the GT’s claimed dynamic agility will be a claimed sub-1800kg kerb weight, which would represent a saving of some 500kg over the Porsche Taycan. This will be achieved through the use of innovative ‘pouch cell’ technology for the batteries, which weigh less than conventionally constructed units, with the added benefit of improved cooling and quicker charging.

The capacity of the battery, supplied by Chinese company Desten, hasn't yet been disclosed, but Piëch said it can charge from 0-80% in as little as eight minutes and offers a range of 311 miles.

Early testing is now under way with the first completed prototype under the supervision of chief developer Klaus Schmidt, who previously served as head of BMW’s M division for some 30 years.

A second prototype will be completed by March 2022, followed by a “further series” of test cars by the end of the year and another batch in 2023. Series production will begin in 2024, Piëch claims, in line with “the tried-and-tested testing cycles of German premium manufacturers”.

The GT will be produced by an established third-party manufacturer, although it has yet to be confirmed which one. Piëch is aiming to produce 1200 GTs in the first year.

The brand’s sales boss, Jochen Rudat, who used to serve in a similar position for Tesla, promised that “interested buyers will soon be able to reserve their own GT and get a head start even before sales begin”.

The company has also thrown some light on how its efforts are being funded ahead of a second round of fundraising beginning imminently.

Chief financial officer Timo Kauer acknowledged the input of “international thought leaders and advisors such as STJ Advisors, in addition to the major bank UBS”, but it's unclear how much has been invested – and exactly by whom – at this stage.

At first i doubted if it was real but decided to give it a try and i contacted this herbal Doctor on email and explain my problem to him and he told me that he is going to prepare a herbal medicine for me which he did and he sent it to me through UPS service, when i received this herbal medicine, he gave me instructions on how to use it, after taken the medicine as instructed, i went for check up and the result shows negative and i was treated of this deadly disease within a 2 week, I am now free from Herpes. You can contact him Robinson bucler @ gm ail co m_____________________

I MUST EXPRESS MY APPRECIATION TO DR ITUA FOR RESCUING ME FROM HERPES PREDICAMENT. As a result of surfing around throughout the online world and finding solutions which were not productive, I assumed my entire life was over. Existing minus the answers to the issues you’ve sorted out as a result of your entire cell food content is a serious case, and herpes have adversely damaged my career if I had not noticed your web page. Dr Itua, Your good understanding and kindness in playing with all the stuff was important. I am not sure what I would have done if I had not encountered such a step like this. I can also at this point look ahead to my future. Thanks for your time very much for this professional and results-oriented help. I will not think twice to endorse your info to any person who should get care on this area. add up on whatsapp +2349048592156. and definitely you will be glad you did so.