BACK TO ALL NEWS
Currently reading: 2022 Kia Niro gets concept-inspired refresh, new interior
UP NEXT
First drive: 2022 BMW XM prototype

Bold styling and efficiency boosts will be features of the second-gen SUV, due after EV6
Open gallery
Close

A dramatically restyled, second-generation version of the popular Kia Niro crossover is being prepared for a launch in 2022, with the new Kia featuring heavy design influence from 2019’s outlandish Kia HabaNiro concept.

Destined for a reveal later this year, the Mk2 Niro will retain its hybrid, plug-in hybrid and Kia e-Niro pure-electric powertrains, but it will be set apart from today’s model by its more overtly SUV-inspired silhouette and overhauled interior.

The new Niro will arrive soon after the Kia EV6 electric flagship and new Kia Sportage SUV as the latest in a series of boldly designed models forging a new image for the South Korean brand.

Whereas the EV6 uses the new E-GMP electrical architecture with 800V capacity and vehicle-to-load charging functionality, the electric variant of the Niro will have an updated version of the current car’s hardware. The latest platform is reserved for vehicles in Kia’s new family of EV-badged electric-only cars.

This means the Peugeot e-2008 rival will be technically similar to the current car, which is available with either a 39kWh battery or a 64kWh unit, giving a maximum of 282 miles of range on the WLTP cycle. Efficiency-boosting upgrades for the second iteration are likely to take this official range past the 300-mile mark, matching the recently updated Hyundai Kona Electric. The 4x4 HabaNiro concept hinted at the potential for a driven rear axle, at least on top-rung variants, but it is important to note that it sat atop a bespoke EV chassis. 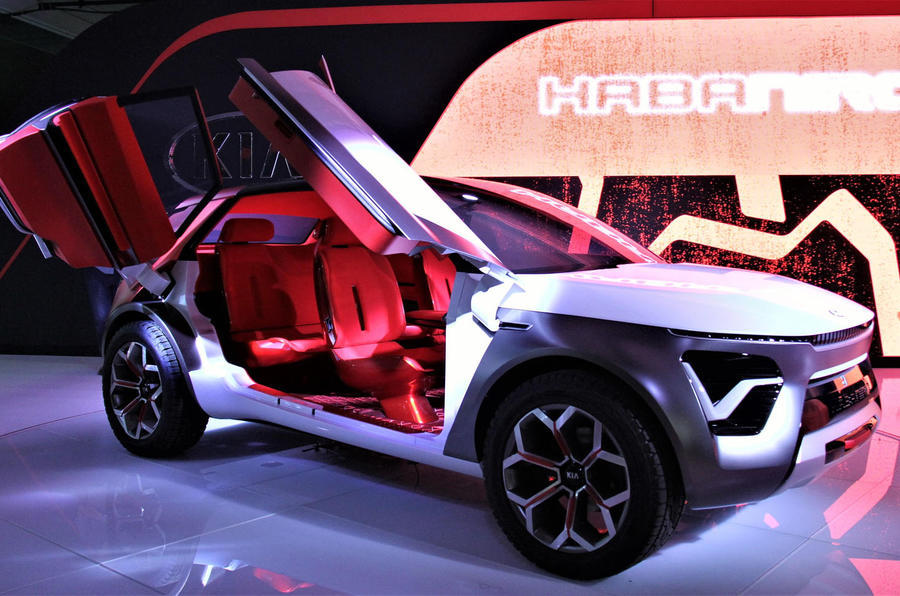 Giving an update on Kia’s position in the UK recently (see separate story, below), managing director Paul Philpott revealed that the shorter-range version of the current Kia e-Niro, which offers 180 miles per charge and drops power from 201bhp to 132bhp, accounts for less than 5% of the model’s sales here. That suggests its survival into the new generation is not a certainty, especially now that there’s a variant of the bigger-battery car that qualifies for the government’s revised plug-in car grant.

The influence of the HabaNiro concept on its production-ready descendant is evident in elements such as the clamshell bonnet, steeper C-pillar and protruding lip across the bootlid. Camouflage obscured the key details of a recently spotted prototype, but it looks as though the Niro will also adopt boomerang-shaped vertical rear light clusters, similar to those of the smaller Hyundai Bayon crossover from Kia's sibling brand.

Equally extensive changes have been made inside, where flush buttons and switches give a cleaner look to the centre console, and the climate controls appear to have been replaced by a touch-sensitive sliding panel. As with the EV6, the central infotainment screen and digital gauge cluster occupy a free-standing panel, while the same minimalist steering wheel, with one central spoke, has been carried over.

As Kia marked 30 years in the UK market last month, it also celebrated capturing a 5% market share for the first time, in the first half of 2021. That’s up from around 1.5% in 2007, and managing director Paul Philpott called it the achievement of a “landmark number”.

With 45,300 sales over the first six months, Kia became the eighth-biggest brand in the UK, with a significantly above-average proportion of electrified car sales (31%, excluding mild hybrids) compared with other combustion car manufacturers. In addition, its 6500 sales of pure-electric cars put it second only to Tesla in that segment. The brand achieved record sales in April, May and June.

Philpott said: “We’ve got a great order bank for quarter three, which puts us on track for 90,000 sales for the full year, which was our original plan for 2021. It was also our plan for 2020, so we’re pretty much back where we wanted to be pre-Covid.

“That all depends on how much supply we can get in the second half. Demand is certainly there to achieve that level of sales, and we’re working closely with Korea and our European headquarters in Frankfurt to maximise supply for the UK market, and things are looking okay. We’d like more supply, but the shortage of semiconductors is affecting every brand.”

Philpott said there is a two- to three-month wait for every Kia model in the UK except the Kia Sorento, for which the brand is recording “unbelievable” demand that it “couldn’t have possibly forecasted”. Delivery times now stretch into the first quarter of 2022 for that car, Philpott said, and “customers are prepared to wait”.

Dramatically restyled? Lets face it, whatever the pros and cons of the current Niro are, it has to be one of the most characterless styled cars on sale. Looks to me like that cheap Chrysler or Daewoo USA airport rental from the early 90's. Radical to them means they'll do away with the left foot operated parking brake.

Autocar's sketch is certainly bold and confident, I suspect the actual model may be a bit more conservative!