BACK TO ALL NEWS
Currently reading: 2021 Suzuki Swift gets new engine, styling and tech upgrades
UP NEXT
First drive: 2022 BMW XM prototype

Suzuki is beginning a renewed assault on the UK market with the introduction of a facelifted version of its Swift supermini.

Updated for the 2021 model year as a mid-life overhaul after launching in 2017, the Swift’s styling has been lightly revised at the front end with a redesigned grille and headlights. All models now feature LED front and rear lights, previously reserved for SZ5 models.

Figures are similar to the old unit, however, with 82bhp and 79lb ft of torque and a 0-62mph time of 12.2sec with a new, optional CVT gearbox. The 12V mild-hybrid system has also been upgraded on the 1.2, with a battery more than three times the size of the old one (up to 10Ah) to boost energy recovery. Combined fuel economy is put at 57.2mpg for the manual model. 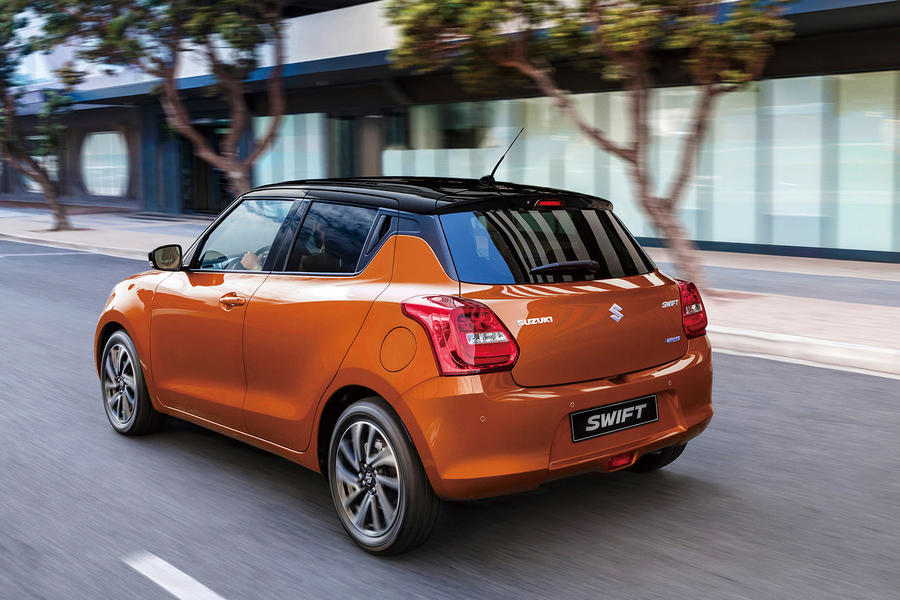 As before, the Swift can also be specified with a permanent four-wheel drive system.

Equipment upgrades feature across the range, too, with a new entry-level ‘SZ-L’ variant (from £14,749) expected to be the biggest seller. Adaptive cruise control is now standard here, while further kit includes a rear-view camera, 7.0in touchscreen with DAB radio and smartphone connectivity, a leather steering wheel, 16in alloy wheels and radar braking support. Prices rise to £18,749 for the CVT-equipped SZ-5.

The Japanese brand is currently marking its 100th anniversary, although it originally began as a textile loom maker and didn’t design its first car until 1937.

Now the eighth-largest car maker in the world with annual sales volumes of more than three million units, its predominant market is Asia. Maruti Suzuki, the brand’s Indian arm, has a staggering 49% market share in its home country.

Suzuki’s market share is far smaller in the UK, at less than 1.5%. GB boss Dale Wyatt admits the business is entering a phase of reorganisation with a “digital restructure” and a push to improve profit margins.

Volumes for 2020, like almost all brands, will be down on 2019, with a 23,000-unit estimate down 7000 on 2019. The brand is also preparing for further business disruption, including local or renewed national lockdowns and the impact of Brexit next year.

It's pretty much worse in all measures, weight, handling, complexity, etc and all for 57mpg which is not great for a slow small car anyway.  I was a suzuki fan but you have dropped a clangner and may go the way of honda in europe.

After making the Swift Sport slower, heavier and much more expensive, they've now dropped the great 1.0 boosterjet engine from the regular Swift!

But at least they've stuck a chrome strip to the front grill to accompany the almost pointless bigger hybrid battery to justify the £2,000 price hike on the entry level model (the Swift used to start from £12749 bit its now £14749).

Yet another mild facelift excuse for a huge price hike.

After making the Swift Sport slower, heavier and much more expensive, they've now dropped the great 1.0 boosterjet engine from the regular Swift!

But at least they've stuck a chrome strip to the front grill to accompany the almost pointless bigger hybrid battery to justify the £2,000 price hike on the entry level model (the Swift used to start from £12749 bit its now £14749).

Yet another mild facelift excuse for a huge price hike.

Yeah, what the hell is wrong with Suzuki?

Really cool, stylish and right-sized (especially for Italy, where these cars are everywhere) Jimny dropped. Stupid.

Swift looks bland since last design update and as you say less powerful and heavier. Boring.

Even their motorbike business is second rate. GSXR1000S is cheap(er) to buy than competitors but you pay for what you get, it is not the best, the snatchy throttle in 2020, suspension, brakes... GSXR1000R, which I have, I like that bike, but again, snatchy throttle, spongy brakes with rubber lines, ECU/IMU faults, and no updates.

Suzuki seems to be a sad company. Very sad.

82bhp/79lbft is a big drop from 88bhp/89lbft is it not?
I used to quite fancy a swift with this engine. Not so much now.