BACK TO ALL NEWS
Currently reading: 2020 Bentley Bentayga facelift to be revealed on 30 June
UP NEXT
Alfa Romeo aims to double production with new image

2020 Bentley Bentayga facelift to be revealed on 30 June

Bentley will officially unveil an updated version of its best-selling model, the Bentley Bentayga SUV, on Tuesday 30 June.

The reveal date confirmation follows a set of leaked images posted online last week, which have given us an idea of what to expect from the overhaul.

Pictures posted to Instagram by user Wilco Blok appear to have been taken from a launch brochure and partly reveal the Bentayga's refreshed styling and new-look interior.

At the front, the Bentayga retains its prominent grille but receives a reconfigured headlight design to match the firm's new Continental and Flying Spur - both of which were launched after the Bentayga arrived in 2016 - and a reshaped bumper with new, straight-edged lower air intakes topped with the same mesh design as the grille.

The rear-end design has not been leaked, but previously spotted test mules showed that the brake lights have been reshaped and expanded, while the current model's deep numberplate recess looks to have been brought forward. 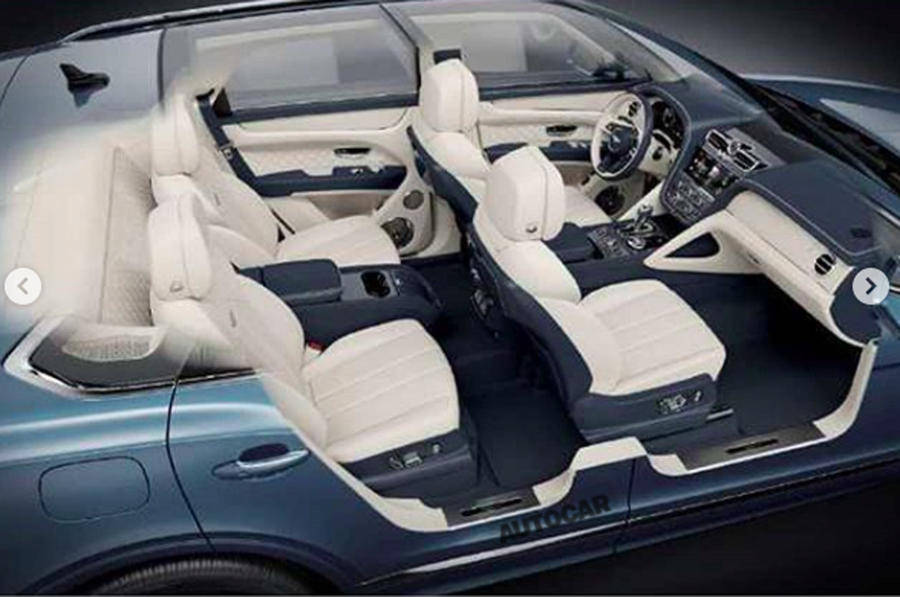 Changes to the interior look to be similarly subtle. The new images show off a new centre console design and reshaped instrument cluster, but more significant is the removal of physical buttons at the side of the infotainment screen.

The current car's infotainment system is often criticised for feeling out of date next to cheaper siblings from Audi and Porsche, so the latest system from the Continental GT and Flying Spur looks to have been introduced, while the range of active safety technology should advance, too.

The flagship W12 engine is expected to receive upgrades to boost efficiency, but don't expect anything dramatic across the rest of the range. The V8 is relatively new, too, and the six-cylinder plug-in hybrid model still isn't on sale after a lengthy delay.

Question marks remain over the diesel model, which was officially axed from the firm's line-up in 2018. A change in attitude towards the fuel was blamed for its removal at the time, but since then, sibling brand Audi has introduced several large-capacity S-badged diesel models to its range.

If only we'd all accept we have an opinion, nearly all different, stop stereotyping people, being sexist and all the other derogatory stuff put up all the time, we'd get a fairer, more interesting friendly website for us all.

Been a long time since such a subtle change in design has provoked so much passion. Especially as 99% of us won't be able to tell the difference between old and new when its 6 inches from your chuff on the M4 on a Friday evening.

I can name many uglier SUVs

But for me the biggest disappointment is that the messy fussy interior has not improved with the facelift.

It's not the exterior but the interior that the designer felt the need to articulate and decorate every available surface (just look at the door card!) The result is a (high class) whore's boudoir.