The Chevrolet Corvette C8 will be the most drastically altered model in its family tree, thanks to its use of an all-new powertrain that mounts a twin-turbocharged V8 behind the passenger compartment.

The next-generation US supercar will trade the front-engined layout of the C7 for a better-balanced mid-engine set-up. Reports suggest this adjustment will come alongside the introduction of a boosted eight-cylinder engine.

The impact the new layout has had on the car's bodyshape can be seen clearly in our latest pictures; the C8 has a shorter nose and longer rear section, complete with a pair of buttresses — evidence of its more balanced packaging. 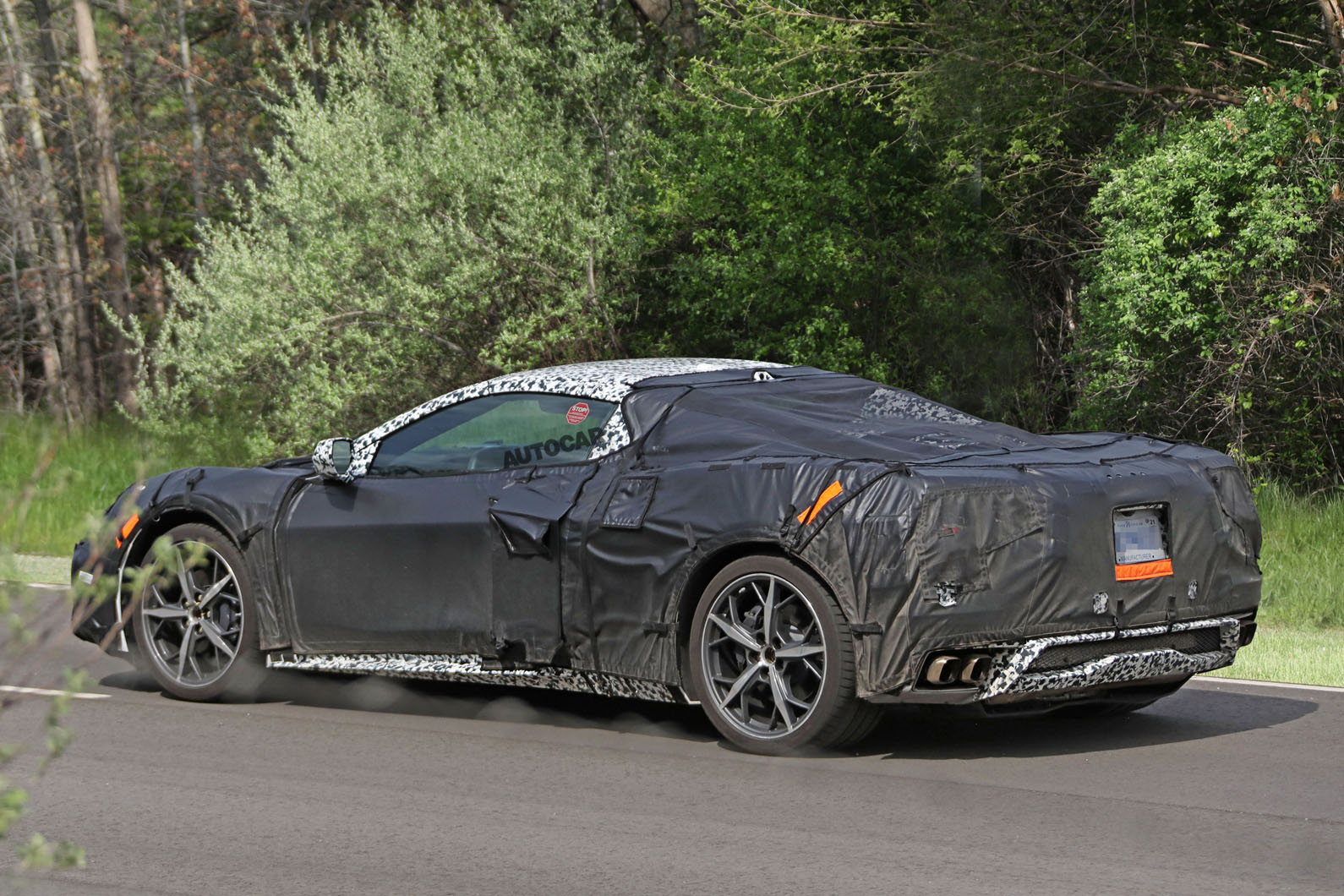 The latest sighting also offers a first glimpse of the car's lights, as well as a reverse camera that's mounted above the rear window and likely feeds its image to the rear-view mirror. This system first appeared on the Cadillac CT6, another General Motors model.

Chevrolet's significantly more focused C8 will pick up the baton from the already well-respected C7, which itself marked a big leap forward from its forebears. The C8 is expected to send up to 700bhp to its rear wheels, ranking it ahead of the Ford GT and Ferrari 488 GTB. 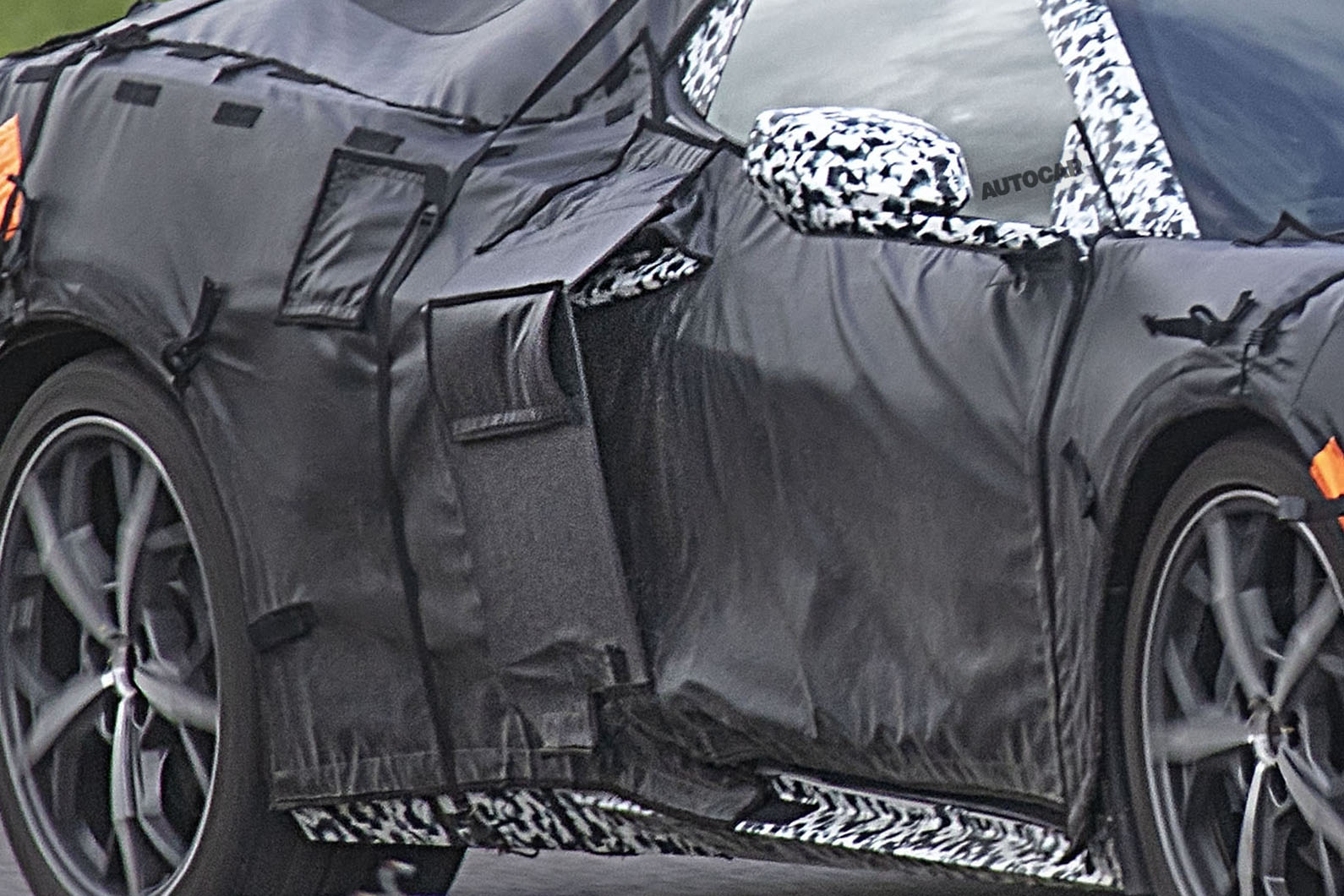 The car looks set to use a turbocharged V6 engine in a cheaper variant that would expand the car's reach and help to bring down the range's average CO2 output — essential in a world of ever stricter emissions limits.

The C8 will use more aluminium in its construction to save weight. Carbonfibre is unlikely to feature for cost reasons; the Corvette has consistently undercut the prices of its most exotic European rivals.

The production C8 is expected to arrive in the UK in mid-2019, shortly after its introduction to the US market.

It's expected to spawn a C8.R racing variant that could hit the track in the 2019 International Motor Sports Association sports car championship, with an entry into Le Mans 24 Hours that summer.

I’m not particularly keen on

I’m not particularly keen on big and simple cars but, talking of front engined V8 sports cars, I see the Mercedes AMG GT is longer, wider, taller and hundreds of pounds heavier than a C7.

Yank tank comments are unfair.  You can't have Porsche performance, Porsche material quality and Nissan pricing, something has to give, see TVR.  I am not into these cars but you should trawl some American websites and check out the track times of properly specified factory Corvettes and Camaros.  If I were asking the best part of half a million for a Ford GT I'd be very concerned.  For a bit of fun, do google images for Callaway Aerovette.

I think a lot of it is due to people having little experience of them. Yes, they can be cheap (quality, finish and price-wise), yes they can be big and rather brash, but, like a lot of cars they suit their homeland and don't necessarily translate too well outside of it.

I think a lot of it is due to people having little experience of them. Yes, they can be cheap (quality, finish and price-wise), yes they can be big and rather brash, but, like a lot of cars they suit their homeland and don't necessarily translate too well outside of it.

Exactly, big and simple, like the customers it's aimed at.

For goodness sake people. The article very clearly says it will have a V8, with cheaper variants having a turbo V6.

So there we are. Three whole pages of repetitive nonsense on this hopelessly poorly functioning excuse for a website.