BACK TO ALL NEWS
Currently reading: 2017 Volkswagen Arteon on sale now from £34,305
UP NEXT
Lotus Emira vs Porsche 718 Cayman

The Arteon replaces the CC and sits above the Passat in Volkswagen's line-up; UK sales start later this year
Open gallery
Close

The new Volkswagen Arteon, the upmarket replacement for the CC, is on sale now, priced from £34,305.

This is a considerable increase over the CC, which was priced from £25,475.

First previewed by the Sport Coupé Concept of 2015, the new five-door fastback slots into the Volkswagen line-up above the eighth-generation Volkswagen Passat, with which it shares its platform, engines, chassis and interior.

The Arteon's current base price is for a car in Elegance trim with the 148bhp 2.0-litre TDI diesel engine, but the range's lowest figure is expected to be closer to £30,000 once an entry-level 148bhp 1.5-litre TSI engine is added to the range. The story is much the same for the second trim level, R-Line, which adds sportier features and currently opens from £35,090 with the 2.0 TDI.

Eventually, the Arteon will be sold with a choice of three turbocharged four-cylinder direct-injection petrol engines and three turbocharged four-cylinder common-rail diesel engines. The two additional petrols will be 187bhp and 276bhp 2.0-litre TSI units, while the forthcoming diesels will be 187bhp and 236bhp variants of the selective catalytic reduction (SCR)-equipped 2.0 TDI.

The transversely mounted engines send drive to the front wheels in all but the most powerful 2.0 TSI and 2.0 TDI models, which are equipped with the fifth-generation version of Volkswagen’s electrohydraulic 4Motion four-wheel drive system as standard.

Further driveline options, including a petrol-electric hybrid, are planned to be added later on.

The styling of the Arteon is credited to Volkswagen brand design boss, Klaus Bischoff, who describes it as “the start of a new design era”.

Set to challenge the new Vauxhall Insignia Grand Sport, it retains the highly contemporary lines of the well received Sport Coupé, albeit with detailed changes to its wide, prominent front grille.

Further design elements carried over from the concept include a contoured clamshell-style bonnet, highly detailed air duct designs within the front bumper, heavily flanged wheel arches, a prominent shoulder line along the flanks, distinctive scalloping within the lower section of the doors, a curved roofline, muscular rear hunches, a fastback tailgate, horizontal LED tail-lights and twin trapezoidal tailpipes integrated within the lower section of the rear bumper. 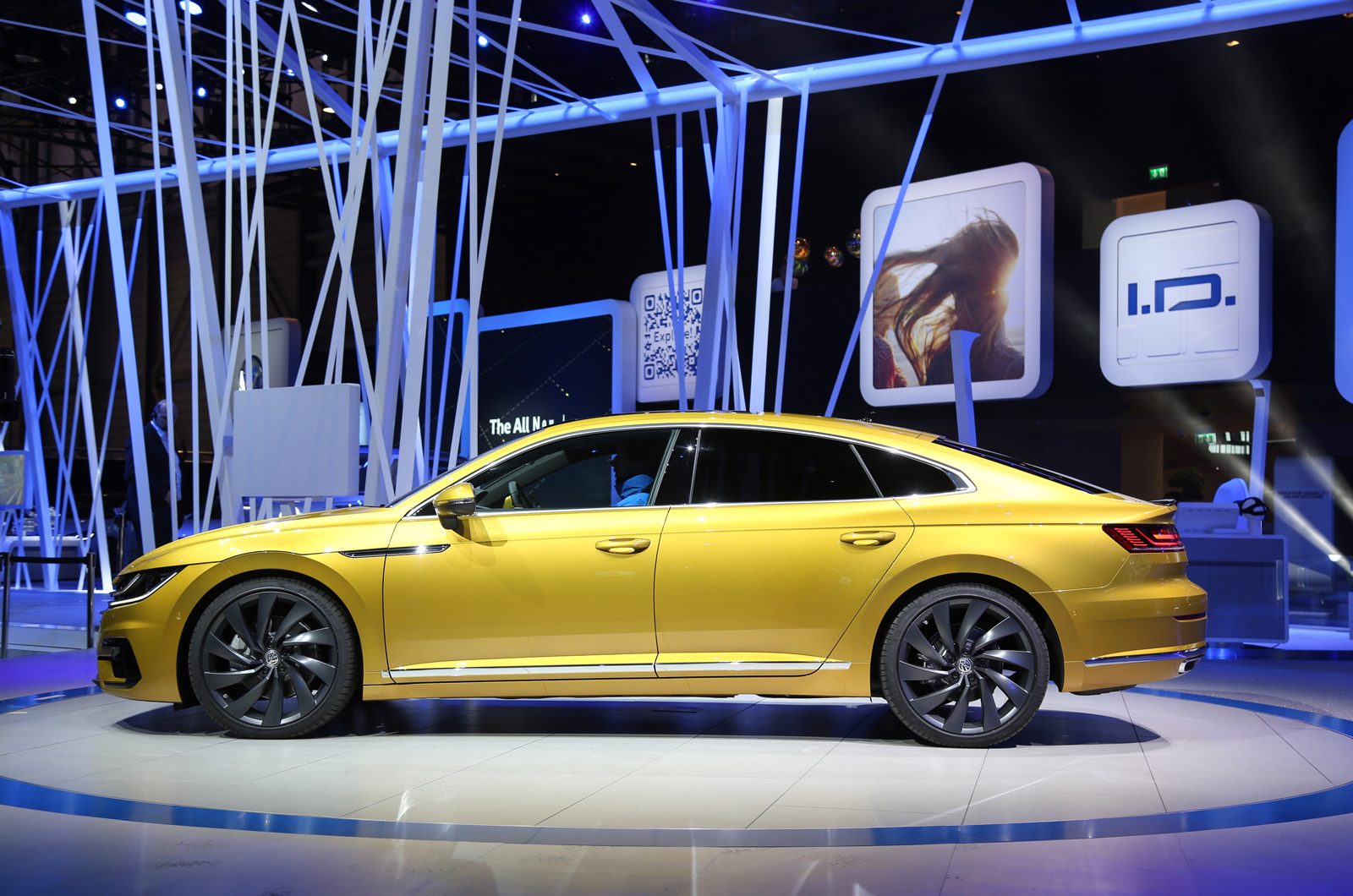 In its most sporting guise, R-Line, the Arteon has high gloss black air intakes at the front, uniquely styled bumpers, chrome embellishments within the lower bodywork, 18in alloys and chromed tailpipes.

Inside, the Arteon has an updated version of the Passat’s dashboard and interior appointments. Included among a number of high-end options is Volkswagen’s high-definition Active Info Display as an alternative to traditional analogue instrument dials, as well as a centrally mounted 9.2in infotainment screen with touch and gesture control.

With a wheelbase of 2841mm – some 131mm longer than the CC and 51mm longer than the existing Passat, Volkswagen claims the Arteon offers class leading rear seat accommodation. Nominal boot space is put at 563 litres, some 33 litres more than the CC, increasing to 1557 litres when the 40/20/40 rear seats are folded away. 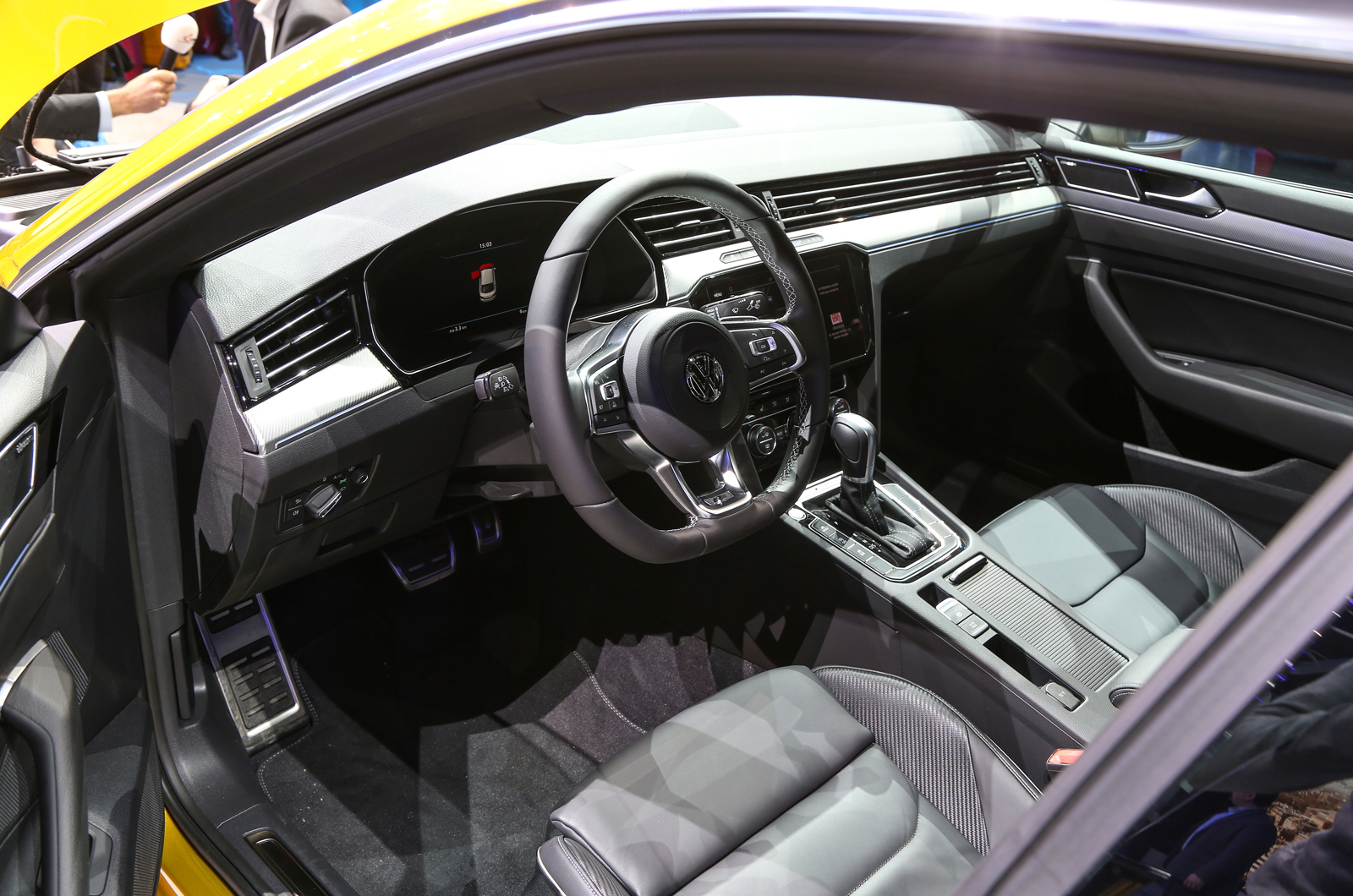 Among the new developments brought to the Arteon is a revised version of Volkswagen's Emergency Assist system. As well as being able to bring the car to a stop when it detects the driver is incapacitated, as before, it now enables the car to autonomously change lanes before stopping to avoid a possible collision.

Volkswagen chairman Herbert Diess said: "The Arteon is for people who listen to their heart and their brain. In the past it was a choice of either or, but now we are challenging premium makers."

The Arteon will be produced at Volkswagen’s Emden plant in Germany alongside the eighth-generation Passat from June.

Its rivals include the Audi A5 and BMW 4 Series Gran Coupé.

The bonnet shutline is nice,

The incorporation of the

The incorporation of the headlights into the full-width grille is almost successful. The headlights are slim and modern, unlike the typical huge bug-eyed monster of Mercedes. Less successful is the rest of the car. The greenhouse profile has lost the fluidity of the original CC. The new more angular shape is less coupe-like and therefore defeats the purpose of a 4-door coupe.
View all comments (15)