BACK TO ALL NEWS
Currently reading: 2017 Honda Civic spotted undisguised in the UK
UP NEXT
2025 Volkswagen ID 1 is Spanish-built, £17,000 entry EV

Autocar readers spot the Honda Civic testing and being transported on UK roads; styling closely follows that of the Civic concept revealed at the Geneva motor show
Open gallery
Close

The 2017 Honda Civic has been spotted completely undisguised on a car transporter by an Autocar reader.

The transporter, which was carrying a number of Civics without any disguise, was spotted heading into Southampton by Autocar reader Nick Mortimer. This means the cars are likely to be heading for the US, given Southampton's role as a major UK export hub.

The full styling of the car is visible, with the familiar angular design of the Geneva motor show concept and test mules that have been previously captured on camera. The twin central exhaust tips are gone on these particular cars, replaced by an exhaust tip on each rear corner.

A rear spoiler remains incorporated into the rear windscreen - something of a Civic hallmark - and the wheels are finished in gloss black. Official sources at Honda wouldn't comment on the image.

The 2017 Civic has also previously been spotted testing in Cumbria by two Autocar readers. 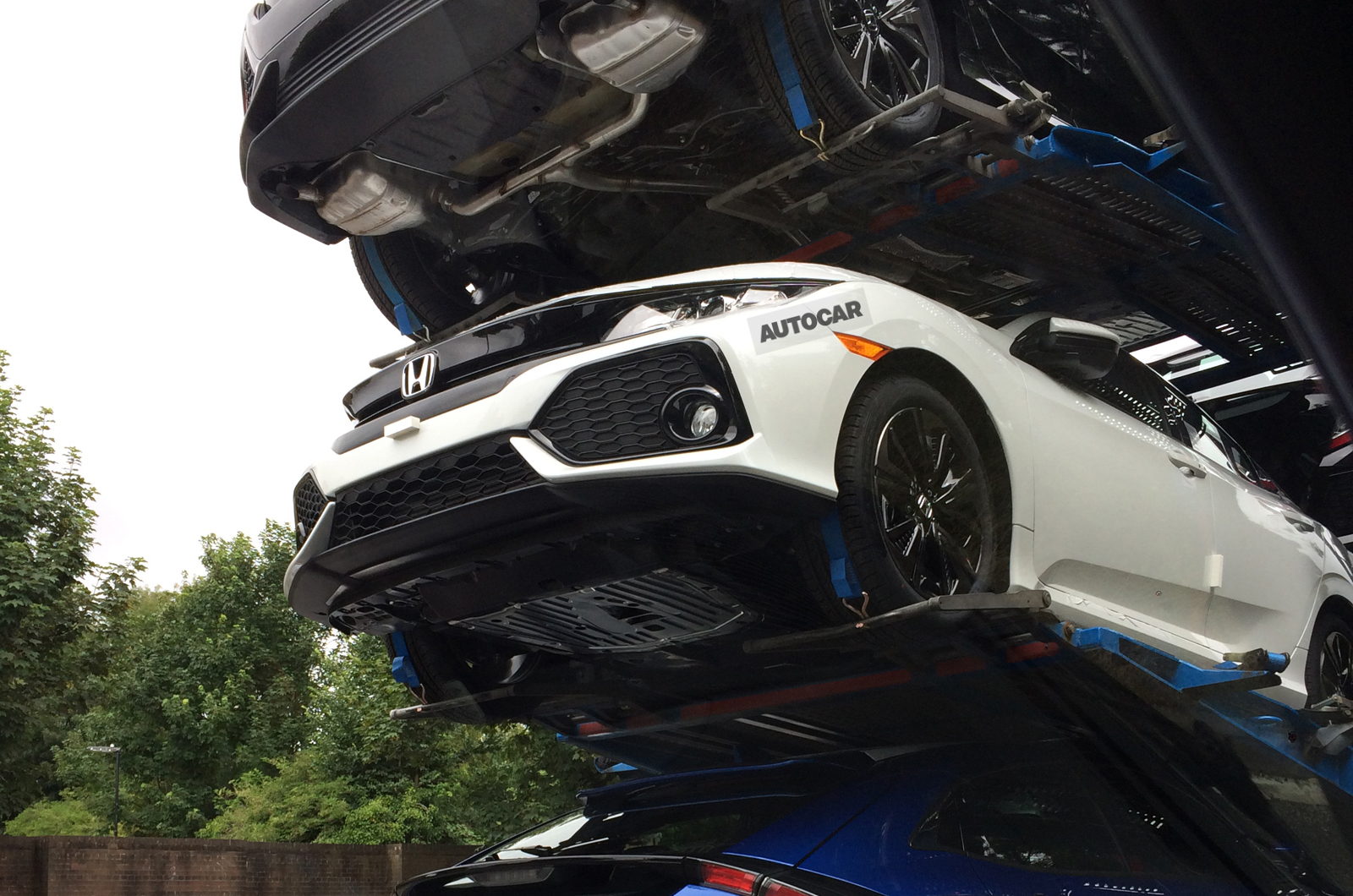 Autocar reader Adrian Jackson was able to describe the car in detail, paying particular attention to the non-LED tail-lights, which didn’t appear to extend into the tailgate like those of the Civic concept, high-quality leather interior and large central twin exhausts.

Jackson's description was confirmed by another Autocar reader, Stephen Biggs, who spotted the Civic and managed to catch it on camera.

The test mule spotted by Jackson was a five-door, left-hand-drive example with a driver and passenger aboard. It wore disguise with an extra roof antenna and had three rear headrests, suggesting a full five-seat layout.

It was spotted on the A684 and continued to the A172, heading east through Cumbria, before driving towards the North Yorkshire Moors.

Another reader, John Kennedy, subsequently spied a second test car on the streets of south-west London.

Previous spy pictures offer a closer look at the Civic's all-new space-efficient interior, with an updated instrument cluster and dashboard design seen here, along with a button for heated rear seats and a blind-spot protection camera.

New headlights can also been in these shots, and look similar to the LED headlights featured in the Honda Civic coupé concept at the New York motor show back in April which previewed the new Civic. 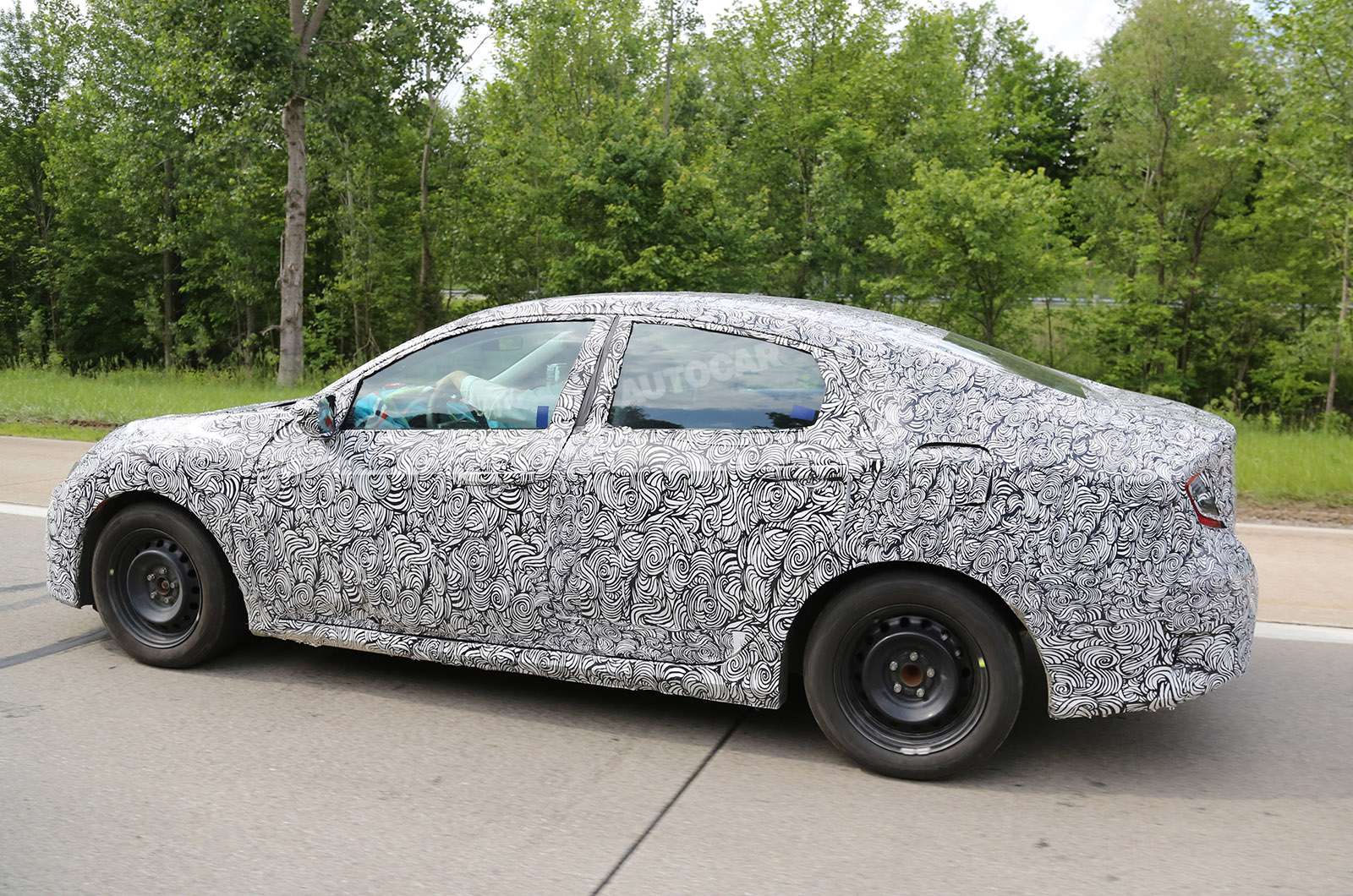 The next-generation Civic is based on a new global platform which will also yield a five-door hatch and new Type R, as well as the four-door saloon spotted here.

Although it has yet to be confirmed by Honda, a new Tourer version is also likely to join the range.

Currently in development in Japan, the US and UK, Honda UK boss Philip Crossman has already hinted that a hybrid version will be offered on the next-generation Civic. Speaking to Autocar at the New York motor show, he said: “We’ll come back with a class-leading hybrid powertrain in the next five years,” said Crossman, “and it’s likely to make as much impact as the VTEC valve system.”

Crossman admitted that Honda has fallen behind with hybrids, despite being the first manufacturer to launch one, with the Insight coupé.

Honda’s Swindon plant will build the five-door Civic for all markets around the world, including the US and Asia, where demand for the hatchback version is rising.

Hardly a scoop is it?

the car is already on sale in many markets and presumably its new owners arent driving around in it in full disguise. Seen several on the roads here in Malaysia - looks OK - does have a slight Accord look to it when you see them in the rear view mirror.
xanderbrown 10 August 2016

the car is already on sale in many markets and presumably its new owners arent driving around in it in full disguise. Seen several on the roads here in Malaysia - looks OK - does have a slight Accord look to it when you see them in the rear view mirror.

That's the saloon on sale in MY. This is the hatchback

It looks big enough in these

It looks big enough in these shots to be an Accord replacement, perhaps it's designed to appeal to Civic and Accord buyers. One vehicle to replace two models has been done before.
Paul Dalgarno 15 June 2015

Will be next to impossible.....

.... to make it any less desireable than the current model.
View all comments (10)