The third-generation Ford Ka has been spotted testing ahead of its launch in 2016.

First previewed with a concept car in 2013, the new Ka is a stand-alone Ford product - unlike the outgoing model, which was made in partnership with Fiat - and is built on a scaled-down Ford Fiesta platform.

Ford says the city car has a focus on space, because the manufacturer sees that area as key to buyers in the segment, although no official capacity figures are available yet.

The manufacturer appears to have stuck closely to the design of the concept car, which, at the time of its unveiling, Ford said highlighted "bold design, quality engineering and innovative technologies". The firm added that the Ka would be "a new choice for entry-level urban customers".

Reports suggested the concept was revealed to assure retailers that a new entry-level model was under development.

The outgoing Ka struggled to match the sales success of the first-generation car.

Ford confirmed that the Ka concept previewed a new global car, saying it "addresses global demand for sub-B compact vehicles, a segment that is projected to increase to approximately 6.2 million vehicles by 2017".

Ford estimated the segment would grow by 35% between now and 2020, although it acknowledged that much of this would follow on from demand from urban buyers in developing countries.

The Ka concept featured Ford's Sync infotainment system and used a dashboard-mounted dock to allow users to connect their mobile phones directly to the car. 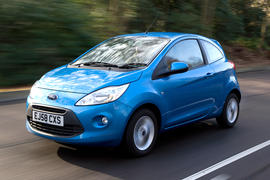 The rear rims somehow look to be an inch smaller than the fronts. Weird. I cannot see any dna from the original Ka, maybe it is hiding under the disguise.
carmad 5 December 2013

After a nice looking kuga,

After a nice looking kuga, there was hope for the new Ka. And they put a daewoo/hyundai back on to it...
spanco 5 December 2013

In the same way that Kia need

In the same way that Kia need a chassis guru with a team around him like Ford did with Richard Parry-Jones, conversely, Ford badly need their own Peter Schreyer. Their cars are great handling and well engineered with slick powertrains but their can't be arsed homogenised styling for me makes them undesirable. The current Focus ST is a case in point. Terrifically well sorted hot hatch with an awesome powertrain that looks like a goldfish on steroids...
View all comments (28)