BACK TO ALL NEWS
Currently reading: 2015 Ford Galaxy - prices and specifications revealed
UP NEXT
New Mercedes-Benz EQA revealed as sub-£40k electric crossover

The 2015 Ford Galaxy will offer all-wheel drive when it goes on sale this summer, with prices starting from £26,445.

Ford’s Intelligent all-wheel drive system measures the road surface once every 16 milliseconds, and is able to send up to 100% of engine torque to the front or rear wheels as needed.

The Blue Oval says the system has a minimal impact on CO2 emissions and fuel economy. The system also means the new Galaxy can tow loads of up to 2000kg.

Ford already offers all-wheel drive in its Kuga, Mondeo, and S-Max models, and the system will also be offered on the Edge SUV when it comes to market later this year.

The new car also features a unique third row of seats which can be raised from the boot floor “at the touch of a button”, something Ford claims is a first in the MPV segment. In addition, both the second and third row of seats can be folded flat via a button on the centre console.

Inside the cabin, Ford has replaced the older car’s traditional instrument cluster with a new 10in digital display, which can be customised.

The Galaxy’s flat load space has been enhanced thanks to an extra 20 litres of storage found beneath the boot floor. Door bins are also larger than before, while under-seat storage is also available.

Ford’s Seat Alhambra and Volkswagen Sharan rival is based on the Blue Oval’s global C/D platform, which also underpins the new Mondeo. The Galaxy also uses Ford’s integral link rear suspension set-up, the same as that found on the S-Max and Mondeo. Ford says the system “delivers improved impact absorption for a smoother ride and reduced noise levels”.

The Galaxy’s suite of safety and assistance technology has also been upgraded. New adaptive front lighting features alongside parking aids, a cross traffic alert which warns drivers of obstacles when reversing, and a front split-view camera system.

Powering the new Galaxy will be a 2.0-litre TDCi Biturbo diesel with 207bhp and 332lb ft. The same engine will also be available in lower-powered single-turbocharger form and offered with 118bhp, 148bhp and 178bhp outputs.

Unlike the smaller S-Max, the vast majority of the Galaxy’s sales are likely to come from fleet rather than private sales. Because of this split, it’s understood that no super-luxury Vignale version of the Galaxy will be offered. 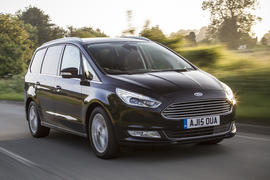 Top-spec Titanium X models get additional equipment including a panoramic sunroof, heated front seats, a powered tailgate, park assist and a rear view camera, and cost from £33,095. First deliveries are planned for the summer.

As part of the One Ford strategy we have sent Europe the Mustang and Fusion/Mondeo and we have gotten the Transit/Transit Connect. Can the U.S. expect the Galaxy as well, given it is based off of the Fusion/Mondeo platform, or is Ford still shying away from the MPV market here?
Factczech 2 April 2015

As a loyal ford fan I have to admit that their latest renderings are somewhat anti climatic. Apart from the Mustang and the shock GT, Ford has been relentlessly churning out quite mundane and frankly average designs. They have stepped up a notch with regards to equipment level and dynamics, so why not get the looks to go with it?
They need a shake up of their entire design and marketing teams. As an ex XR3i owner I must say the model in the photo with the caption " Welcome to first class " looks as if they took him straight from a capri for the photo shoot.
Come on Ford its time you treat your loyal fans with the respect they deserve and start giving them something they will proud to be seen in.
The Koreans have achieved this- it is not much to asked as fans of the brand.
erly5 30 April 2015

They have stepped up a notch with regards to ..... dynamics

I think quite the opposite judging by the lukewarm reviews of the new Mondeo and the less said about the Ecosport, the better!

Looks dissapointing, I've also seen a few new Mondeo's and they are not easy on the eye. I think Ford are struggling for style.
FastRenaultFan 2 April 2015

Looks dissapointing, I've also seen a few new Mondeo's and they are not easy on the eye. I think Ford are struggling for style.

Really I have seen a few of the new Mondeo,s too and I think it looks fantastic. It looks really good in black too. Only for the badge you could almost think its an Aston Martin.
As for this new Galaxy well its a MPV basically the same as the one before but with a new front end rear lights and dashboard. Think it looked better before. The big grill does not do anything for the Galaxy but maybe in the metal it would look better.