BACK TO ALL NEWS
Currently reading: MG3 hot hatch racing concept unveiled
UP NEXT
Bespoke ‘Silent Shadow’ to start EV era at Rolls-Royce

MG Motor has unveiled its hottest-ever MG 3 in the shape of a race-bred concept with a retuned engine, producing 204bhp and 192lb ft of torque.

The hatchback – developed on the current MG 3 road car platform by a team of specialist MG engineers, led by vehicle engineering specialist Adrian Guyll – was built for two reasons.

Primarily, it is a toe-in-the-water exercise to gauge interest in a club racing version of the MG 3. However, MG says the car also "highlights in-house engineering, design and calibration capabilities at SMTC UK in Longbridge".

SMTC is the European Design and Technical Centre that's located alongside MG Motor UK at the Longbridge site in Birmingham. SMTC and MG are both owned by parent company, SAIC Motor; the largest automotive company in China.

The outputs of the 1.5-litre, turbocharged VTi Tech engine are 105bhp and 100lb ft in the standard MG 3 road car. 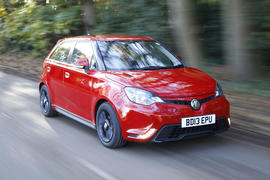 This is the kind of thing we need to see...

It may be modest and a one-off but it does show that MG is at least partly about fun and sportiness and not just about trying to compete with Skoda and KIA. A small step in the right direction.... albeit some future strides are still needed....
fadyady 27 June 2014

More input from the MG-Uk

That is exactly what the MG line-up of cars need to compete in the very competitive UK as well as the European market.
ryan 27 June 2014