BACK TO ALL NEWS
Currently reading: Lessons in gravel and jumping with Audi’s rallycross stars at Silverstone
UP NEXT
Hyundai i10 EV successor primed for 2024 launch

I never knew gravel was so interesting as a topic for deep discussion. But at Silverstone on Saturday evening, after the screaming 580-horsepower supercars had been silenced, stripped down, cleaned and rebuilt ahead of tomorrow’s second day of FIA World Rallycross Championship action, EKS Audi Sport's Mattias Ekström educated me otherwise.

Gravel is important to the Swedish star and his rivals. They spend each race dancing their hugely powerful four-wheel-drive rallycross cars from grippy asphalt sections to loose dirt surfaces and back again, many times over the course of a race. They need to recognise how much grip those little particles of stone, sand and dirt are going to offer. 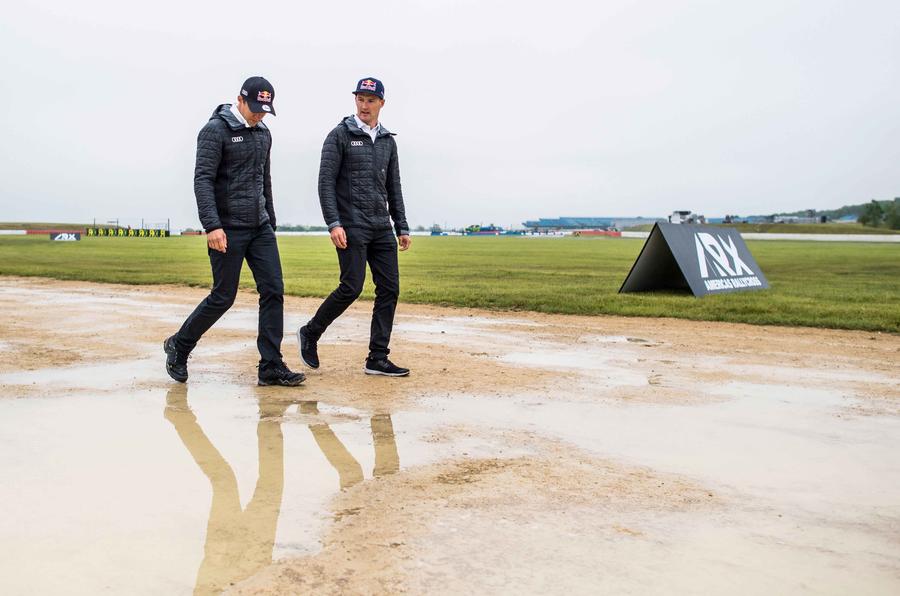 “The gravel here at Silverstone is not like Swedish gravel,” says Ekström. “British gravel is like a clay and concrete mixture, rather than sand. When the Silverstone gravel gets wet it is so slippery, but when it is dry it is very grippy like asphalt. If I was a billionaire, I would give Silverstone a present of some Swedish or Norwegian gravel.

“There is a huge difference in the gravel at the WRX circuits. At the moment the German track [Estering] probably has the best gravel sections in the world. There are a lot of small stones. Sap from the trees over the track means it can get a bit greasy, but for drivers, that is the gravel.” 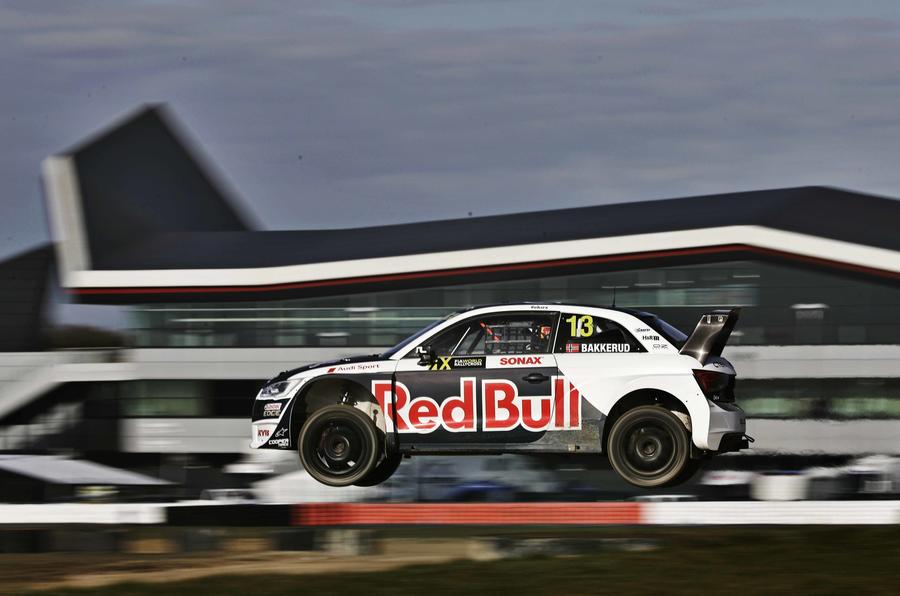 This weekend’s event marks the first time Britain’s round of the FIA World Rallycross Championship has been held at the new ten-turn track at Silverstone. The racing on the 0.6-mile circuit is wrapped up in a festival named Speedmachine, which features music acts, circuit hot laps, E-Sports, retro car exhibitions and a collision of smokey, spicy smells from the concession stalls, some selling some fairly brutal-looking meat products. 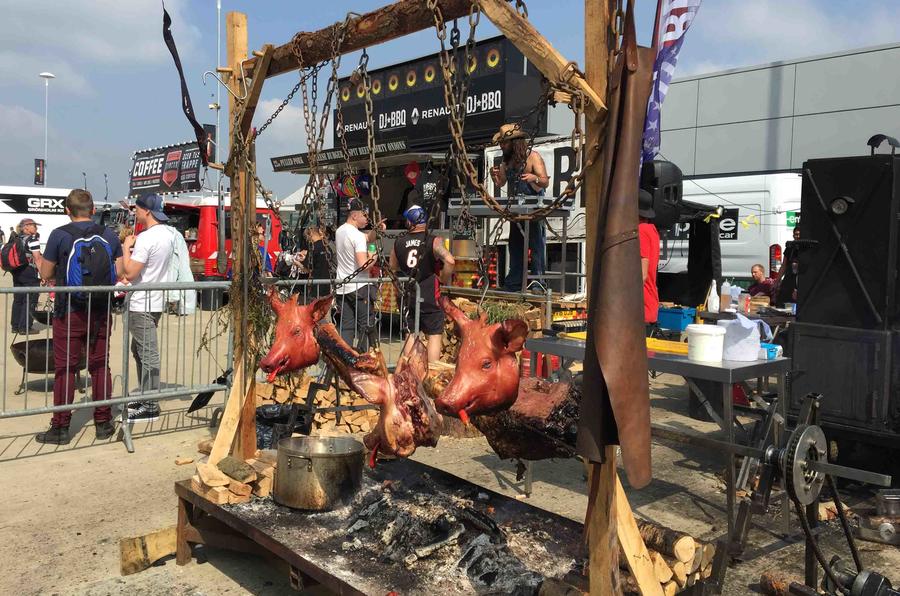 Although the drivers miss the character of Lydden Hill, the historic circuit that was sacrificed from the WRX calendar to make room for Silverstone, they seem to agree that the new track offers a decent challenge.

The Silverstone track surface is 40% asphalt and 60% gravel, features a longer ’joker lap’ section that each driver must negotiate once during each race and an enormous jump, the biggest drivers will face all season. It's possible to jump up to 22 metres long and two metres high over it, but in fact drivers have to brake and settle the car before taking off because a tight right-hander follows soon after landing.

Perfecting the car’s set-up so that it is fast on the asphalt but forgiving enough to soak up the bumps and lumps on the gravel can be a headache. Bakkerud says: “This evening the team’s technicians had to do some welding on my car at the end of the day. We went a little bit softer on the set-up to make the car fast on the track, but when I took off hard and long over the jump, the car was bottoming out upon landing due to the soft set-up and it damaged the chassis.”

Power for the three-door Audi S1 EKS RX quattro comes from a four-cylinder turbocharged 2.0 engine and the output is regulated at 580hp (572bhp). Allied with a weight of just 1300kg including the driver, 0-62mph is dispatched in a frankly ridiculous 2.5sec. With competitors starting five abreast for the qualifying races, rapid acceleration is essential to give Ekström and Bakkerud the best possible chance of winning the sprint into the first corner. 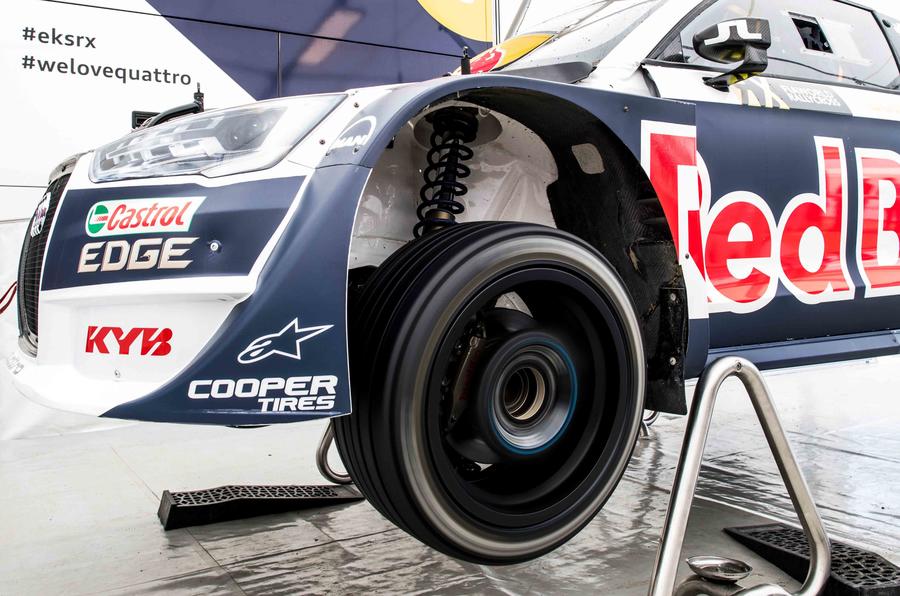 “Rallycross is an awkward combination of drag racing, circuit racing, rallying and even stunt driving, especially here at Silverstone with the huge jump,” says Ekström, who is one of motorsport’s great allrounders, having twice won the DTM touring car series in addition to his WRX crown. He’s now stopped DTM racing to focus full-time on rallycross – he has his hands full, because the brace of Audi S1 quattros are prepared by his own EKS operation with input from Audi Sport.

Another challenge of the sport comes once a race when competitors must peel off onto the longer ‘joker’ section. What started out as a way of enhancing overtaking has become a significant strategic element; by taking the joker lap early in a race, for example, a driver can find some clear air and put in some fast laps.

“We have a spotter in a tower next to the track who is our eyes and ears and will make the call,” explains Bakkerud, who is one of the sport’s rising stars and has an ardent following on the WRX tour, readily identifiable by their baby blue T-shirts. “The spotter gives us all kinds of information. Before the race we try to make a plan A and a plan B, but always end up needing plans C, D, E and F too. It rarely works out exactly the way we want it to.” 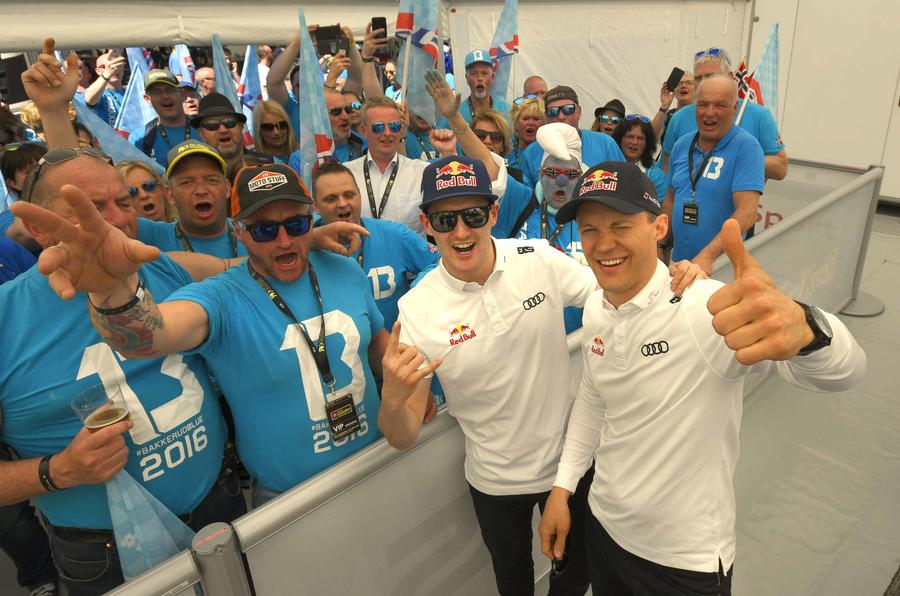 With the Audi Sport team-mates sometimes fighting for track position in the same race, it’s important that the spotter delivers information quickly and accurately, he says: “Everyone is so equal when you get to the first corner on lap one that it is sometimes difficult to know who is who and how hard to defend or attack. You need to be open-minded and fast reacting.”

On Saturday Ekström and Bakkerud both had good starts, with the former winning two heats and ending up second in the classification behind Petter Solberg and the latter holding down fourth place at the close of play. There’s talk of a thunderstorm rolling in on Sunday, which could spice up the action even further – as if the slippery British gravel wasn’t enough of a challenge…