The new Porsche 911 GT3 Cup will be "a good 1%" faster around a track than its predecessor, courtesy of a power hike, improved aero and revisions to the chassis.

Introduced ahead of the launch of the road-going GT3 early next year, the Cup car is the first racing version of the 992-generation Porsche 911. It will be raced competitively from the start of the 2021 motorsport season, participating in the Porsche Mobil 1 Supercup and the various worldwide Porsche Carrera Cup series.

The previous generation's 4.0-litre naturally aspirated flat-six engine is carried over, but peak power - achieved at 8400rpm - is up by around 25bhp at 503bhp, while torque is unchanged at 347lb ft. More significantly, the engine has been configured to run on synthetic fuels, which, Porsche claims, "significantly lowers" CO2 emissions during a race.

Performance figures have not yet been detailed, but expect the GT3 Cup to improve upon the previous GT3 road car's 3.4sec 0-62mph time.

The dry-sump motor requires a maintenance check after every 100 hours of track time, but a "minor inspection" of the six-speed sequential gearbox is needed every 60 hours.

The same engine will feature in the road-legal GT3 with an identical power output but will be tuned for enhanced longevity and reduced noise. 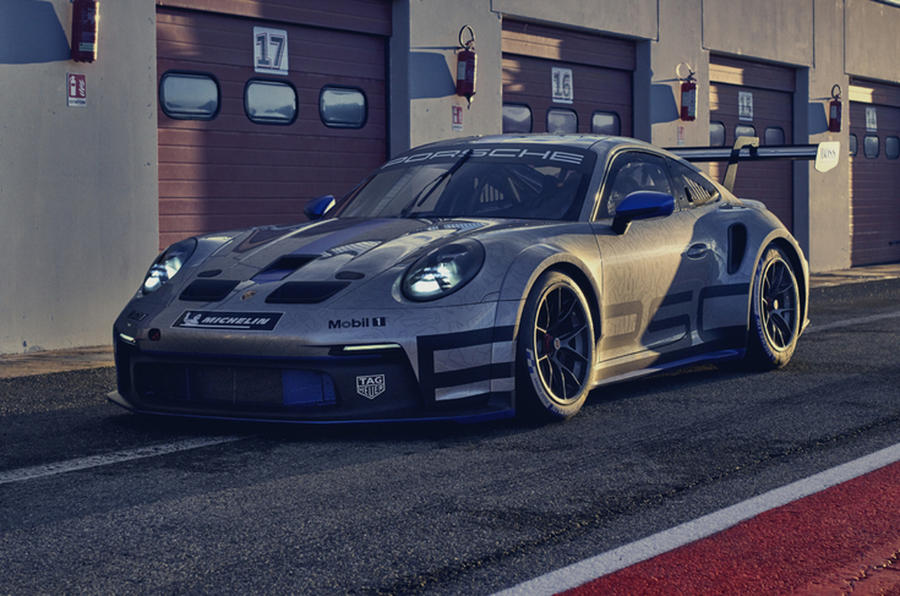 For the first time, the racing car wears a wide-body shell based on the 911 Turbo. That means it's 28mm wider than the previous car at the rear and has a pair of extra cooling vents ahead of the rear wheels.

Along with the larger body, the GT3 has gained a bigger rear wing and front splitter for improved aerodynamics, and the body now consists of 70% aluminium and 30% steel, whereas its predecessor was the reverse.

Despite the swap to a lighter overall structure, the new model actually makes a 35kg weight gain, which Porsche attributes primarily to the addition of new support struts, taking it to 1260kg.

Rounding off the hardware modifications, the new GT3 Cup adopts a new double-wishbone and 'Uniball' bearing set-up for the front suspension, promising improved turn-in behaviour and wheel feedback, while new valve technology for the shock absorbers means they no longer need a hydraulic pump to operate.

Responding to feedback from drivers of the previous car, Porsche has introduced new height settings for the seat, rearranged the buttons on the steering wheel and added a new rotary control knob for adjusting the brake balance. Subtle revisions to the 10.3in colour display give easier access to vital information.

Fitment of a second seat has been made easier with the relocation of the control units and data loggers that previously occupied the space, with the result that the 911 GT3 Cup can now be used for "racing taxi drives".