BACK TO ALL NEWS
Currently reading: BTCC 2018: Neal scores first win for new Honda Civic Type R at Thruxton
UP NEXT
Ford Puma ST hybrid prototype spotted at the Nurburgring

But the big winner of the weekend was Ciceley Motorsport Mercedes racer Adam Morgan, who scored victory in the reverse grid final race to claim the championship lead after a tough weekend for rival Tom Ingram.

Power Maxed Vauxhall Astra racer Josh Cook also had a strong weekend, putting in a charging drive in the second race to claim his second victory in as many meetings.

Here’s what else we learned from Sunday’s three races at the ultra-fast Hampshire circuit.

The BTCC’s young guns have dominated in 2018 so far, but 51-year-old Neal struck back in style at Thruxton.

After a mixed start to the season with the new Civic Type R, the Team Dynamics-run works Honda squad showed much-improved form, with Neal claiming a dominant pole position and then resisting intense pressure from BMW driver Colin Turkington in the opener for his 62nd career win.

“I had a fantastic start to grab the lead through the opening bends and, from there, the Civic Type R’s strengths through the quick corners meant no one could get close to me,” said Neal.

Running full ballast in race two hampered Neal, but he held on well to claim third place, then added eighth in the final race of the day.

Neal’s teammate, Dan Cammish, had a strong start to the weekend, taking third in the opener, but a clash knocked him down the order in race two. He recovered to 13th in the finale.

Having taken ninth place in the opener, Cook had to work hard for his race two win. But he flew up through the order, before overhauling Neal and race leader Turkington with bold moves at the chicane to hit the front.

“Winning at Donington Park was enjoyable, but to do it from the middle of the pack was even better,” said Cook.

The victory handed Morgan the championship lead by one point from Cook. 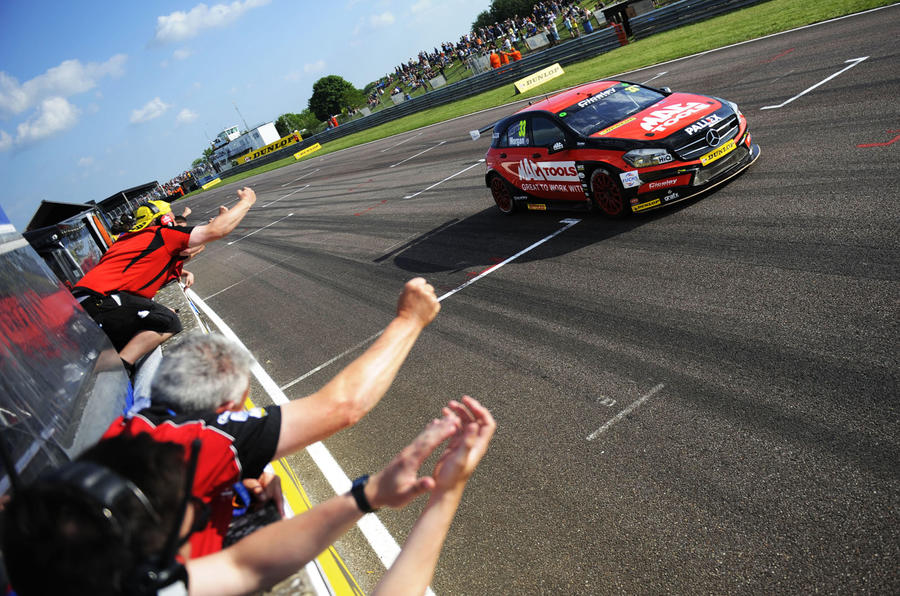 Speedworks Toyota driver Ingram, who led the points coming into the event, had a tough weekend, dropping out of the opener after a clash and had to work his way back up the order. He eventually took seventh in race three and is now third in the points, 11 behind Morgan.

Some consolation for Ingram came with his fastest lap in the final race — which, at 1m 10.060secs, was also a new lap record. Yvan Muller’s lap record had stood since 2002, but Ingram was one of several drivers to eclipse it during the three races.