Dacia has sold more than 11,500 cars since launching in the UK 10 months ago. The Duster is the marque's best selling model, with 5600 sold to date. The Sandero has sold 5400 units. The firm has just handed over its 10,000th car, a Duster, to a buyer in Perth, Scotland.

The Subaru Outback is now available with a 2.0-litre Boxer diesel mated to a Lineartronic CVT gearbox; a world first, according to its maker. It claims 44.8mpg on the combined cycle and emissions of 166g/km. Other revisons include interior and exterior styling tweaks and changes to the suspension setup for improved ride comfort.

Volvo Cars has appointed Mikael Ohlsson to its board of directors. Ohlsson is a former IKEA Group boss and takes over the position on the board of directors that was occupied by Håkan Samuelsson. Volvo says he brings a “deep knowledge of customer-focused retail operations”.

The much-needed diesel engine for the Cadillac range won’t be here next year, says the brand’s European boss, Thomas Sedran. Caddy owner GM is currently considering what Sedran describes as “two timing options” for the diesel, but neither includes 2014.

Infinti has appointed its first Europe-based product boss. Nicolas Tschann will co-ordinate all new model development across Europe, the Middle East and Africa. He previously headed up the Q30 Concept development team. Infiniti Europe boss, Fintan Knight said: “we have the ambition to disrupt and lead the premium segment with great technology, fast innovation and seductive styling. The fact that we have created this senior role shows how crucial it is to Infiniti’s future here. Nicolas brings with him a wealth of Infiniti experience, local knowledge and product passion.”

Maserati has gathered 20,000 orders so far this year following the release of its 5-series rival, the Ghibli, and the the new Quattroporte. The bulk are for the Ghibli. Last year Maserati sold 6300 cars. 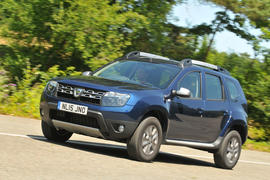 ... will be well chuffed selling 11,500 cars in 9 months in its first year. At 5,600, Duster should be pretty much neck to neck with the over-hyped Skoda Yeti, I suppose.
No wonder VW bosses are cooking up a cut-price brand / range - better still they could just save themselves the trouble and right price their existing brands / ranges.

At last Subaru put an automatic on the diesel boxer. But it's a hateful CVT. I too am out!

Eventually, the Subaru Outback gets an automatic transmission option on the diesel - better late than never - but sadly it's a CVT, not anyone's favourite type of automatic.

And 150 bhp diesel from a performance manufacturer is pants when you consider that Freelander, Hyundai and Kia have had 190+ for years now.

I had a 2006 petrol Outback which I loved - it had 3 weak points - the lack of interior room - the fuel consumption - and the black hole between 2nd and 3rd in the ratios of the 4-speed box.

The current model eliminated the space issue (it's bigger inside) - gained an economical, but low-powered engine - didn't get a 6-speed conventional automatic.

So it still doesn't make my shortlist - "I'm out!"