China’s biggest domestic car maker, Haval, is planning to launch into Europe in the early part of the next decade as part of a two-pronged assault outside of China alongside sister brand Wey.

Haval has been China’s top-selling brand for each of the past seven years, thanks to the success of its H2 and H6 models, which were joined today at the Guangzhou motor show with the launch of the Nissan Qashqai-sized H4 to sit between them in the range.

Jens Steingraber, vice president of Haval’s parent firm and CEO of its premium sister firm Wey, said “Haval would go abroad” into more mature markets. As for a timescale, he said: “The beginning of the 2020s to be realistic.”

Steingraber, who joined Great Wall from Audi, has his main focus on Wey, which launched this year as the first attempt at a more premium Chinese domestic car maker. He says Korean and Japanese brands, the likes of Hyundai, Toyota and Honda, are the targets for Wey, which revealed its plans to launch in Europe earlier this year at the Frankfurt motor show.

Steingraber said Great Wall was different from other Chinese firms in targeting a successful launch in more mature markets by “learning the lessons from mistakes of others before”. To that end, he said that you “only get one shot” at launching into a market such as Europe. 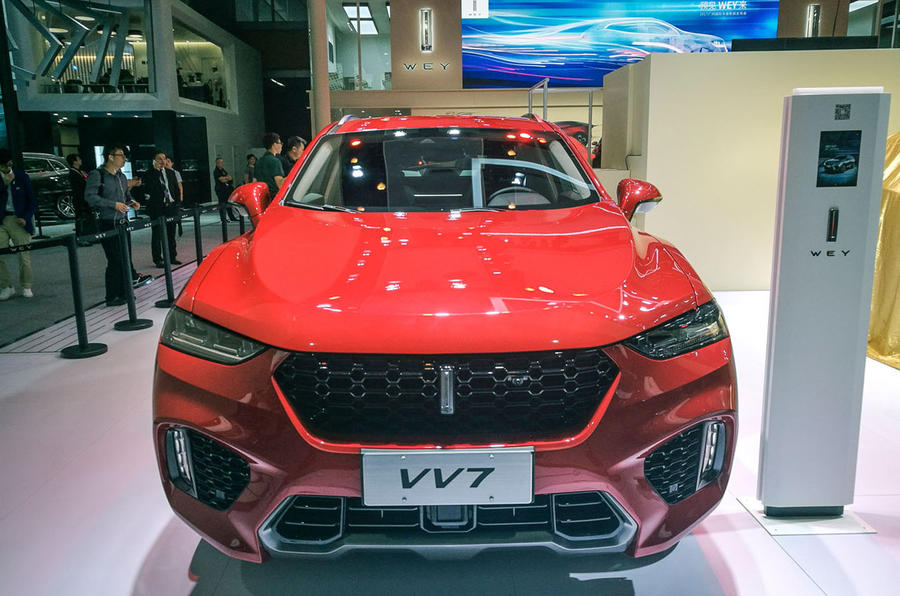 He pointed to safety as the most crucial thing to get right, to dispel the myth Chinese cars were all cheap and unsafe. “Our brand is a safety brand with no failure allowed,” he said, adding that Wey could pass the most strict of US crash safety tests even now, and the cars had been designed and engineered from the start of their life to be ready to be exported overseas when the time was right.

Design was also a crucial part to the success of Chinese cars overseas, said Steingraber. “You can build cars as good as you want, but if it doesn’t look good, no-one will buy them. It’s quality and safety.”

Wey was planning its global launch with its full model range, which currently consists of VV5 and VV7 (pictured above) models, with a full range planned by 2021, including a larger VV8 model in March next year and a smaller VV3 to follow later in 2018. Autonomous technology is being developed, as are full electric versions, and fuel cells to launch by 2023, as well as plug-in hybrid versions of its models as soon as next year.

UK plans were not fixed for either Wey or Haval, said Steingraber, who added that Wey planned to be selling 400,000 cars a year by 2020. Great Wall sold more than a million cars last year, with the Haval H6 regularly topping sales charts.

History of the Chinese copycat car: in pictures

In this windows if you search that how to find my documents windows 10 then this is the best process to know about this whole the latest function i am so excited to see the whole latest function.

Look, don't make me do research, I'm too busy - do it yourself, then you won't get it so wrong.  For some bizarre reason, you seem to think data from 2011 is better than from 2016/17.  It seems you're sniffing the same stuff as him above.  Just stop it.  China only makes 25 million cars a year, whereas the rest of the world makes 91 million cars.  You only have to type the question into Google to get the results that will stop you posting silly things like "In 2011, the China-only...".  Bruddy irriot.

They have been trying to sell Chinese cars in this country for a couple of year, where price is always king. They have had success with pickups and buses, to a lesser extent with trucks. But cars are few and far between. I was in one a few weeks back beign ferried around and it was pathetic. Engine and transmission noise was unacceptable, plastics were basic and poor fit with seat backs differing in stiching detail for example, between passenger and drivers seat.