BACK TO ALL NEWS
Currently reading: Skoda Vision E electric concept revealed in Shanghai
UP NEXT
Audi: No rear-wheel drive option for RS performance models

The striking Skoda Vision E electric car concept has been revealed at the Shanghai motor show.

The 300bhp production version of Skoda’s electric-powered crossover is predicted to hit 62mph from rest in just six seconds, about 0.5 sec faster than an Octavia vRS hot hatch.

Significant for being the first Skoda concept powered by a battery-electric drivetrain, the Vision E is also a “very good guide” to a 2020 production electric crossover and sets out the Czech company’s electrification strategy, which promises five fully-electric cars by 2025. The first electrified Skoda will be a plug-in hybrid version of the Superb, launched in 2019.

‘By 2025 one-in-every-four cars sold by Skoda worldwide should be a plug-in hybrid or have a purely electric drive,’ says the company. Designed in the Czech Republic, the Vision E possesses purposeful proportions with tight front and rear overhangs, a pleasing sweeping roofline and strongly-expressed feature lines. It sits on a 2851mm wheelbase, 60mm longer than Skoda’s new Kodiaq SUV and 10mm longer than the Superb saloon which takes advantage of the floor-mounted battery and compact motors and drive components of the MEB electric car platform, allowing Skoda’s designers to push the front bulkhead farther forward than in an internal-combustion engine car.

At 1591mm high, the Vision E is about two-thirds the height between the Kodiaq and Superb, giving it tall-car, crossover proportions.

“We have a very democratic interior, with good space for both the front and rear occupants,” says Marko Jevtic, exterior designer of the Vision E concept.

The body features a generous hatchback opening, further emphasising the Vision E’s practicality. Skoda refers to the roofline as ‘coupe-like’ and it does curve gracefully front to rear as it subsides towards the rear lamps.

To emphasise interior space, Skoda has designed ‘clamshell-style’ doors in which the back pair hinge rearwards to give access to the cabin unhindered by a central pillar. A favourite of concept designs, it is most likely that the production car will feature a central pillar to ensure adequate side-impact safety.

The production car is also likely to sprout wing mirrors in place of the concept’s cameras. 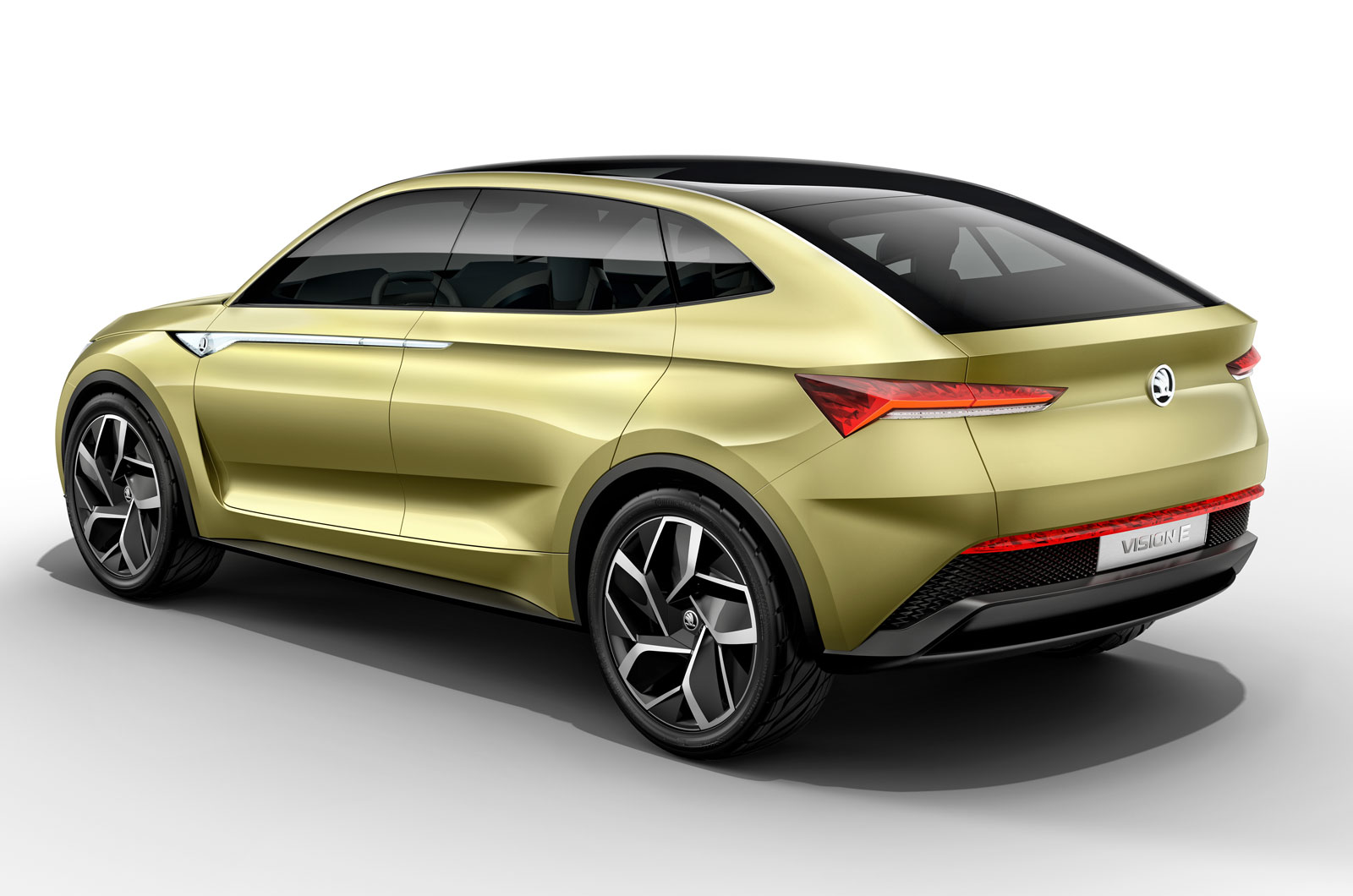 Like all electric cars, there is no need for a conventional grille capable of flowing cooling air to a radiator.

Instead, designers now have the freedom to create a new front face using shaped sheet metal and lighting which Skoda’s designers have dubbed a ‘phantom grille’ that appears as if it is present but in reality isn’t.

Trapezoidal front LED lamps are pushed to the extremities of the front face and linked by an illuminated bar fashioned from crystal glass, one of the Czech Republic’s most famous exports.

The designers have also further emphasised the distinctive ‘winged line’, the crisp styling feature that runs along the bodyside of all Skoda’s current cars. “It is more pronounced, more sensual and more sculptural,” says Jevtic.

Inside, Skoda’s designers have also penned a new look taking advantage of the flat-floor body architecture, which emphasises spaciousness.

A major change compared to an i/c engine car is no need for a gearshift, a freedom that interior designer Peter Olah describes as ‘paradise in design.’

Olah’s interior features a sweeping dashboard centred on a 12in touchscreen, centrally-mounted and arranged in conventional ‘landscape’ format, rather than Tesla and Volvo’s more contemporary ‘portrait’ orientation. New to Skoda is a dashboard architecture designed with a prominent step to allow the driver to steady his/her hand as functions are selected on-the-move. Full-width across the dashboard is soft, mood lighting, configurable in different hues.

In front of the driver is a two-spoke, multi-function wheel and a second flat screen for basic driving functions.

Two lithium ion battery packs are being engineered for the Vision E and its VW Group platform twins – either an 80kW or 50kW – which are expected to be offered as individual models just as different engine capacities make-up a car range today.

These battery packs can then be combined with a choice of two motor outputs – 175kW (234bhp) on the rear axle and 50kW (67bhp) on the front axle.

The battery pack is capable of quick charging to 80 percent in 30 minutes and is designed to charge in conjunction with an inductive plate which can be installed in an owner’s drive or garage.

The motor power is rated in total at 225kW (equivalent to 300bhp) but is split between two motors. It is assumed one will power the front axle and another the rear axle, but again these details haven’t yet been released.

Skoda claims acceleration up to the car's top speed of 112mph is “particularly smooth and dynamic”. Skoda sources say that the maximum performance combination will still offer a 500km (310 mile) range, although a 234bhp two-wheel drive Vision E equipped with an 80kW battery is tipped to offer an even longer-range.

The production version of the Vision E goes on sale in 2020, although it is likely that the model range will be phased-in over 18 months.

18 April 2017
I'm keeping a mental tally of the number of Skoda Electric car stories Autocar can do before the car is made.

I'm keeping a mental tally of the number of Skoda Electric car stories Autocar can do before the car is made.

I'm keeping a tally on how many times VW can rehash exactly the same car.

I'm keeping a mental tally of the number of Skoda Electric car stories Autocar can do before the car is made.

The total tally of stories of this yet to be made seventh wonder of the world across this hydra headed group is 5X13 so far. Needless to say get ready for the first electric car that Autocar will finally give 5 stars.

19 April 2017
Still another fat-arsed, shitty jeep, with the additional drawback of being electric and even more useless. Electric cars are going nowhere.