BACK TO ALL NEWS
Currently reading: Nio ET Preview hints at 2021 electric saloon
UP NEXT
Hope for Bloodhound LSR project as sponsor talks start again

Nio has revealed a new concept car that previews its first saloon model at the Shanghai motor show.

The ET Preview is said by insiders at the Chinese firm to be around 80% representative of an electric large saloon that’s due in production before 2021. It has a fastback bodystyle with an all-glass panoramic roof and alloy wheels inset with carbon fibre inserts for improved aerodynamics. Adaptive matrix LED headlights are said to mimic human eyes, while the rear lamps pulse to replicate a heartbeat.

Inside, the car uses electromechanical door latches instead of traditional handles, and includes Nio's NOMI digital assistant to help the driver with infotainment and navigation. The always-connected system uses voice recognition for hands-free operation.

The ET acts as a demonstration of Nio's high-density nickel-cobalt-manganese battery pack and 220kW electric motor powertrain, which the company claims will deliver a cruising range of up to 317 miles under China's NEDC-based tests.

It will use high-efficiency permanent magnet motors to drive its front wheels, in conjunction with high-performance induction motors at the rear. It is understood to be closely related to the ES6 SUV.

Nio has solely made SUVs to this point, after launching with the limited-edition EP9 electric hypercar.

The ES6 will enter production this June, joining the Audi Q7-sized ES8 in Nio’s range. It gets an NEDC range of 317 miles from its 84kWh battery pack. 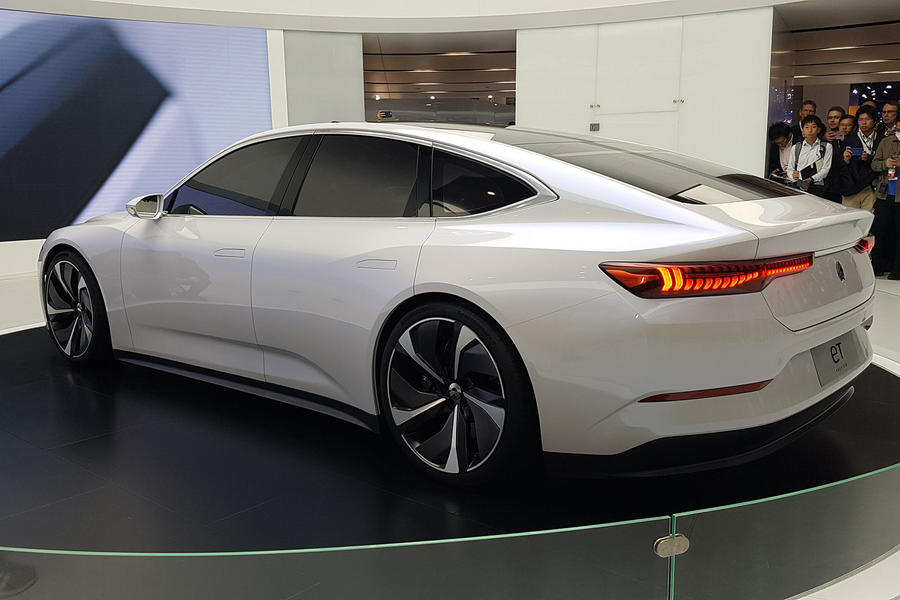 The ET Preview was penned by the original BMW i design team, including exterior designer Kris Tomasson. It was designed in Munich, Germany but is currently planned for sale only in China. Nio is yet to disclose any plans for exporting models in the future.

Nio has so far delivered some 15,000 examples of the seven-seat ES8, which costs some £51,000 in China before subsidies, since production began last June. The ES6 will cost from the equivalent of £41,000 before subsidies.

The brand also used the show to announce the extension of its "One click for power" supercharging network to users of other EV brands. Available through the Chinese messaging platform WeChat for 280 yuan per service (roughly £30), the collect-and-return charging service has already been used over 93,000 times by Nio owners.

looks pretty neat, looks like a posher version of a vauxhall insignia hahaha (from the back anyway) really like it hope we can see more photos soon.