BACK TO ALL NEWS
Currently reading: Mercedes-Benz X-Class pickup truck to be revealed later today
UP NEXT
Rodin FZero: V10 weapon aims to be world's fastest car

The Mercedes-Benz pickup truck was revealed last October in concept form. Hours from its reveal, Mercedes has revealed some of its styling
Open gallery
Close

The Mercedes-Benz X-Class pick-up truck will be revealed in production form later today, and to mark the occasion, Mercedes has revealed a preview image of the car ahead of its unveiling.

The typically murky image reveals little that we've not seen, but highlights the production car's design features, like the grille, headlights and bumper at the front, and its wheels and a sharp crease along the lower sides.

What's yet to be seen is the rear-end styling; Mercedes presented two distinct looks when the concept version was revealed, but previous testing outings allowed us to catch a glimpse at the disguised rear ahead of the reveal.

Mercedes-Benz's pick-up truck was previously spotted in development on video, having shed a little disguise since first shots of the pick-up emerged.

It's clear from the video that the production X-Class will draw heavily from the concept precursor revealed in October 2016, with the familiar Mercedes face on the front resembling that of the larger Mercedes SUVs like the GLE and GLS. At the rear, the taillights appear to take the shape of the distinctive full ring lights of the concept, although the rear flap handle disrupts what would be the upper edge of the LED rectangle.

Despite the time elapsed since the concept's reveal, the spotted development still rides on alloys from the Nissan Navara, on which it's based.

Mercedes' first pick-up truck will be built at Spanish and Argentinian plants owned by the Daimler and the Renault-Nissan Alliance.

Speaking at the Paris motor show, Carlos Ghosn, chairman and CEO of the Alliance, said: “The partnership between Daimler and the Alliance has grown and matured. By sharing development and production costs, we have been able to enter new segments and offer our customers more compelling vehicles with the latest technology and features at more competitive prices."

Mercedes' pick-up will benefit from this business system, and will be constructed alongside Renault’s Alaskan truck and its Nissan sister model, the NP300 Navara. 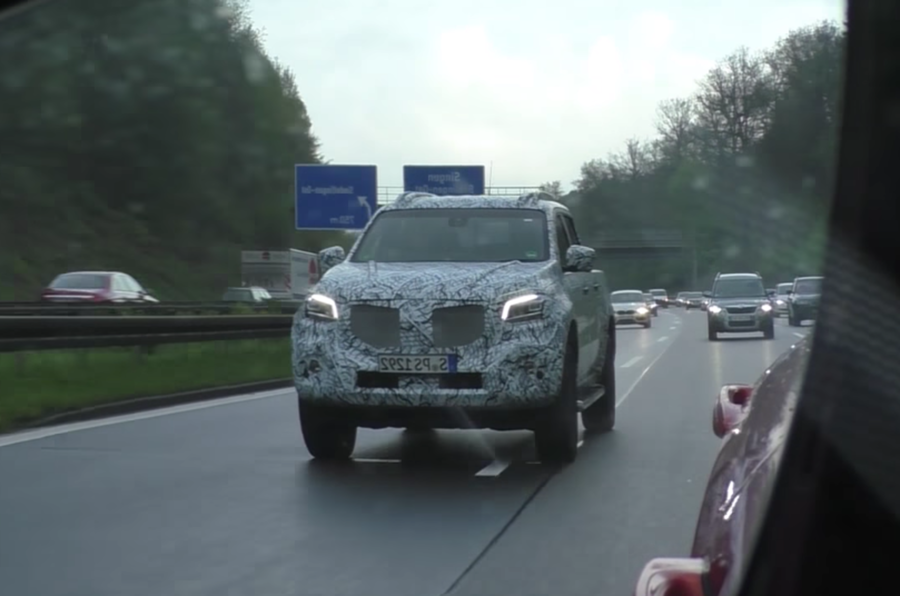 Despite the shared underpinnings, Mercedes is understood to be focusing on giving its version of the pick-up a distinctive character. As such, it'll get its own range of engines and its own suspension settings.

Earlier pictures of a development model, shown in the gallery, also suggest it’ll sit lower and be slightly wider than its Renault and Nissan siblings. Mercedes’ design language appears in the features, with the upswept appearance of the headlights visible in outline through the camouflage.

The Mercedes pick-up will most likely have a different interior to that of the Nissan too; the test car's dashboard and other interior components were also camouflaged.

Mercedes claims a load-carrying potential of 1100kg for the X-Class, and a towing capacity of the range-topping diesel V6 model is a claimed 3500kg. Four-cylinder petrol and diesel engines supplied by Nissan, as well as a Mercedes petrol V6 are expected to make up the engine line. A hot AMG version would likely use a V8. 4Matic all-wheel drive is likely to be optional, but standard on the V6 engine and above. Also offered will be a transfer case offering low-range gearing, on-demand differential locks and electronic traction control for added off-road prowess. 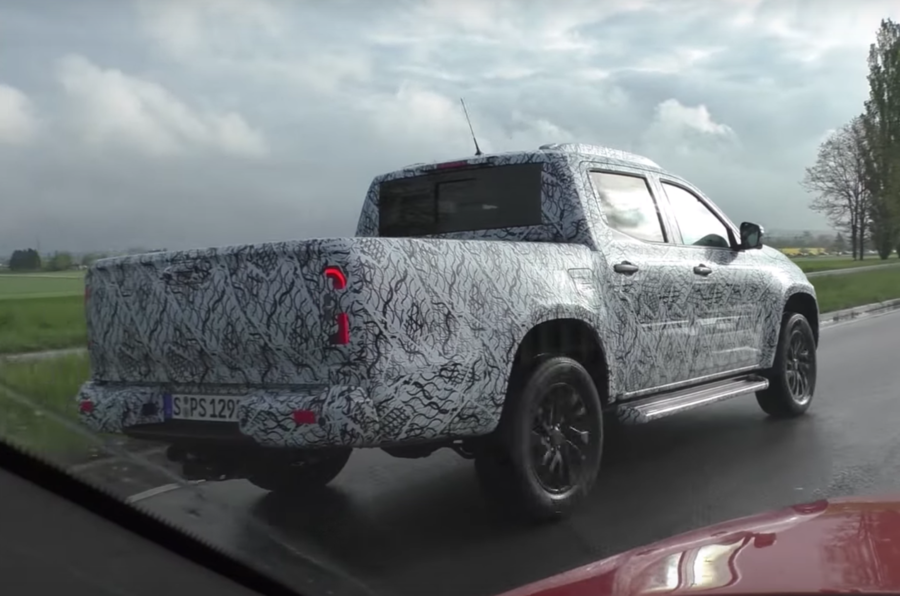 Among the engines planned to power the X-Class are yet-to-be-specified four-cylinder petrol and diesel units, supplied by Nissan, together with the top-of-the-line Mercedes V6 gasoline engine showcased in the concepts of the Mercedes-Benz pick-up revealed in Stockholm, Sweden.

The more premium interior and upmarket badge of the Mercedes mean it’s likely that it will be more expensive than its £22,000 Navara counterpart. It'll therefore occupy the upper end of the pick-up segment, rivalling the Volkswagen Amarok.

Previous reports have suggested that it won't reach North America but would be sold in Europe, Australia, South Africa and Latin America.

The unibody pickup is a good

The unibody pickup is a good niche to go for.  As Chevy, Ford and Ram go ever more macho, with mid-size trucks pulling what full sized trucks pulled a few years ago and full sized trucks pulling what railway locomotives used to, there was a gap for people who wanted a truck capable of towing small boats, light trailers with off road bikes, camping gear, etc but with the benefits of a monocoque, i.e. more structural rigidity, more room, better ride and handling.  Credit to Honda for blazing this trail and the second generation Ridgeline is selling very well.  If the Merc is as reliable as the Honda, I will eat my hat.

Got the video set to record

No matter how you describe it,it's still a Navarra with a three pointed star. a nasty cynical marketing exercise that won't fool anyone.
View all comments (12)