BACK TO ALL NEWS
Currently reading: 2018 Porsche Macan due for reveal at Paris motor show
UP NEXT
New 2022 BMW 3 Series brings redesign and tech upgrades

2018 Porsche Macan due for reveal at Paris motor show

A facelifted version of the Porsche Macan will be revealed at the Paris motor show this October before arriving on roads towards the end of the year.

Autocar has already driven a prototype for the car, and it has been spotted testing on multiple occasions with next to no camouflage.

The sighting showed slimmer indicator strips that have been integrated into the grilles of a new front bumper, which has an entirely new lower section. The SUV also receives upgraded headlights with altered LED graphics, although the overall shape of the headlight clusters remain the same as those in use today.

The Macan was the first Porsche to adopt structured tail-light lenses; those on the new model are restyled with new LED-enhanced lens graphics and what appears to be a full-width reflector panel across the tailgate — a design feature that has already graced a number of recent Porsche models.

Although the facelifted Macan was originally expected to receive an updated interior featuring the touch-sensitive switchgear introduced to the latest Panamera, the prototype pictured below gives no clues that this will be the case, since it retains the same controls the SUV was launched with back in 2014. But with another three years before it is due to be replaced by a comprehensively re-engineered second-generation model, we would be surprised if the new capacitive switches didn’t make their way into the 2018 Macan. 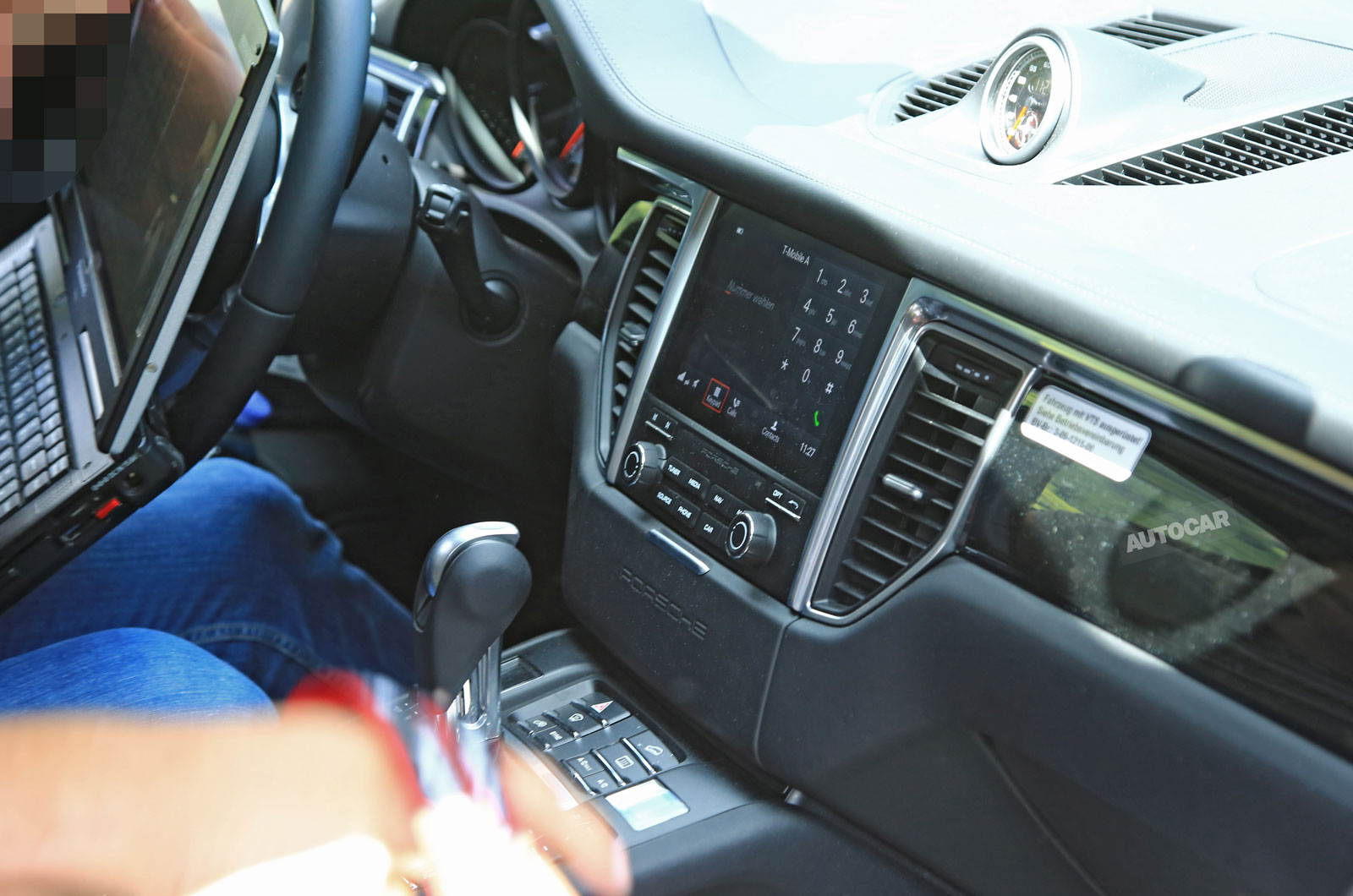 What we can bank on is the adoption of a pair of new 7.0in displays within the instrument cluster, together with a 12.3in touch-sensitive infotainment display as part of an updated Porsche Communication Management system. The system, launched in the latest Panamera, supports Apple CarPlay and Android Auto smartphone integration and contains a new function called Porsche Connect, which offers services such as call centre support, a wi-fi hotspot, real-time traffic updates and remote access via a smartphone.

On the engine front, the Macan’s existing turbocharged 3.0-litre and 3.6-litre V6 petrol engines will be replaced by more advanced 2.9-litre and 3.0 units.

In 3.0-litre form running a compression ratio of 11.2:1, the new V6 delivers 325bhp and 332lb ft of torque in the entry-level Panamera. This is 10bhp and 7lb ft less than the least powerful version of the outgoing 3.0-litre engine, which serves up 335bhp and 339lb ft in the existing Macan S. There is more to come from the new engine, though. With altered software liberating added turbocharger boost pressure, the same unit kicks out 349bhp and 369lb ft in the latest Audi S4 and S5. 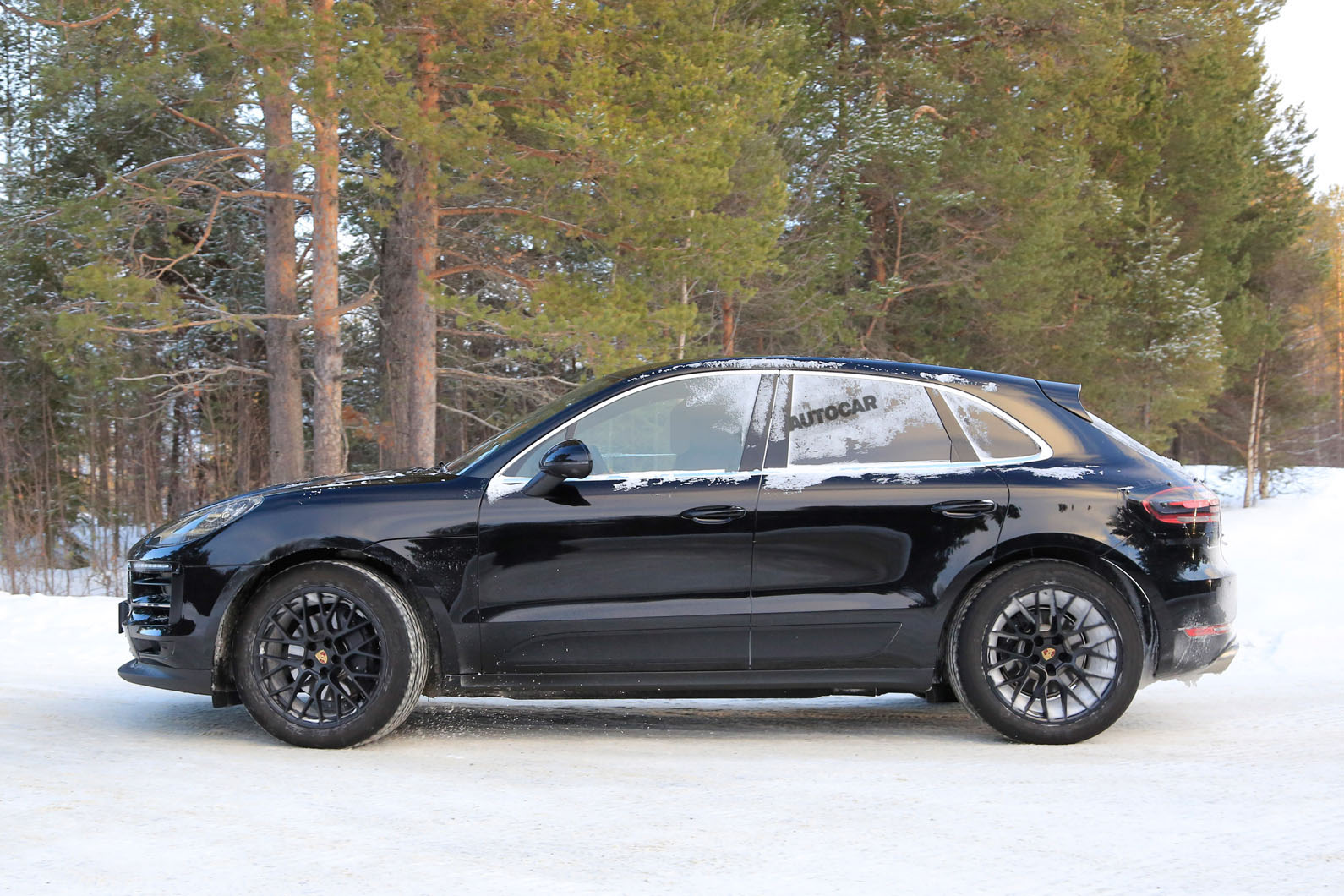 A more performance-oriented version of the new V6 with a lower capacity of 2.9 litres and compression ratio of 10.5:1 is earmarked to replace the current 3.6-litre engine. In the Panamera S, it provides 434bhp and 406lb ft — 39bhp more than the existing Macan Turbo, with the same torque output.

Also planned is a petrol-electric version running the same drivetrain used by the Panamera 4 E-Hybrid. It uses the new turbocharged 3.0-litre V6 petrol engine in combination with an electric motor to provide a combined system output of 456bhp and 516lb ft of torque.

Diesel hasn't been offered with the Macan since it was dropped at the start of this year in the face of changing consumer demand.

The greatest Q cars ever made

So a new colour

And for the 3.0 an engine that could be a little better (hopefully more ecomomical) but likely much of the same. Wish they would have moved to the newer Q5 platform that would likely be 100kgs lighter taking it down from current 2 tonnes. Interior has to be upgraded.

The 2.9 is for China tax hurdles

Vehicle tax is lower for engines under 3.0litre in China - VW/Audi is introducing this 2.9lt version into performance models but eventually into all models it intends to sell in China

It's going into everything from the R8, A8, RS4 etc - Panamera, Maccan, Cayenne as well

I read the 2.9 is a substantially different engine. Higher scope for tuning probably oversquare lower friction more revs. What i don't get is the lower compression ratio.