From £85,3758
Plug-in petrol-electric Panamera makes a better case than ever to supplant the diesel best seller, but it still appeals more to the head than the heart
Open gallery
Close

The Panamera 4 E-Hybrid is a Porsche designed primarily to appeal not to the chest-thumping, tarmac-tearing road warrior that lurks within most of us, but to your inner accountant, to whose presence we may less readily admit. The ‘4’ in the name denotes the number of driven wheels, while the ‘E’ means it can be plugged into your electricity supply.

We have, of course, been here before. The old Panamera was available not only as a hybrid but also as an e-hybrid and, contrary to instincts that asked why people didn’t just buy the cheaper, better diesel version instead, it actually sold reasonably well, accounting for 20% of British Panamera sales.

Applying the same logic, this one will do far better than that. It is, of course, quicker thanks to its brand new electrically boosted, Porsche-designed twin-turbo 2.9-litre V6, which provides 456bhp and a 516lb ft wall of torque at just 1100rpm. It knocks the 0-62mph time back from a brisk 5.5sec to a distinctly rapid 4.6sec. And yet, if official fuel economy figures are to be believed (which they most certainly are not), it will do more than 95mpg. The E-Hybrid will now cover 30 miles on electrical energy alone, versus the previous model's 22, and it will do 87mph before feeling the need to summon up a little internal combustion assistance. The old car would do just 84mph. For that, thank 134bhp of pure electrical power under your foot, instead of just 95bhp.

So it’s better in almost every measurable way and, being a brand new car, I should think so too. Less easily predictable is the fall in price from £88,967 for the old Panamera E-Hybrid to £79,715 for the new. That makes it almost £9000 cheaper than the 22bhp less powerful Panamera 4S. 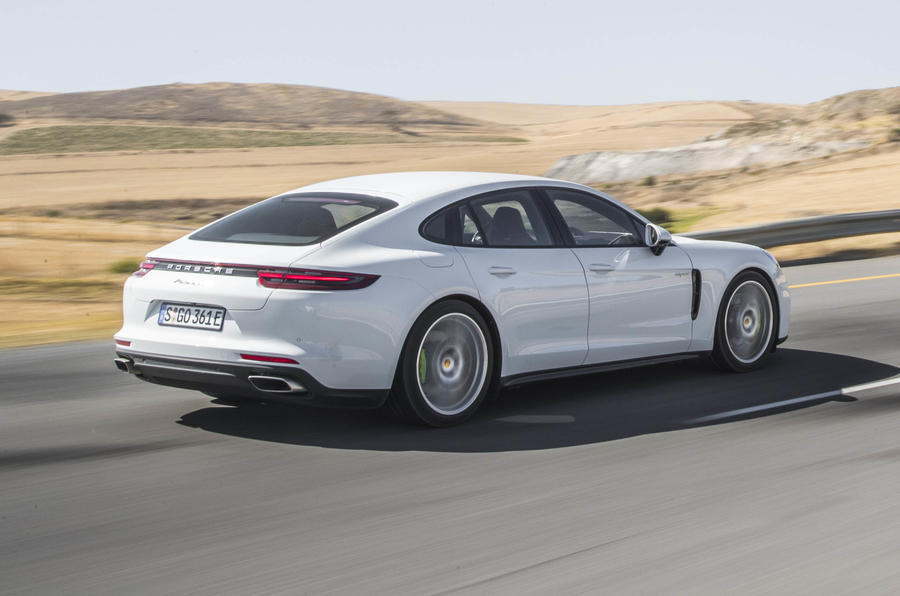 In electric-only mode, the E-Hybrid is absolutely lovely. Many owners will be able to commute in absolute, untroubled silence and, rightly, that will make this car very tempting. The problem comes when the internal combustion engine chimes in. Brand new and Porsche designed though it is, silken it is not, and its rather gruff voice strikes a stark contrast to the unsullied quiet offered when powered by electricity. It’s an engine that makes you want to upshift early and downshift late. Which, for any Porsche, is a shame.

Also, the E-Hybrid handles well, but only to a point. It clings on grimly enough in fast, steady-speed corners, but the steering lacks feel and when the grip does start to go, the car is not hugely responsive to remedial action. Blame a kerb weight fully 100kg greater than that of a long-wheelbase Mercedes-AMG S63 for that and, wait for it, 320kg more than that of a standard Panamera 4.

In truth, this Porsche is a cruiser, never better than when letting its standard air springs do their silken thing, as you sit in that sumptuous cabin, goggling at the ultra-high-definition graphics of the intrument and infotainment screens, as the world rushes silently by. In this preferred environment, it really is extraordinarily good, although it would be remiss of us not to lament the fact that the harder you drive it, the further from its comfort zone it becomes. 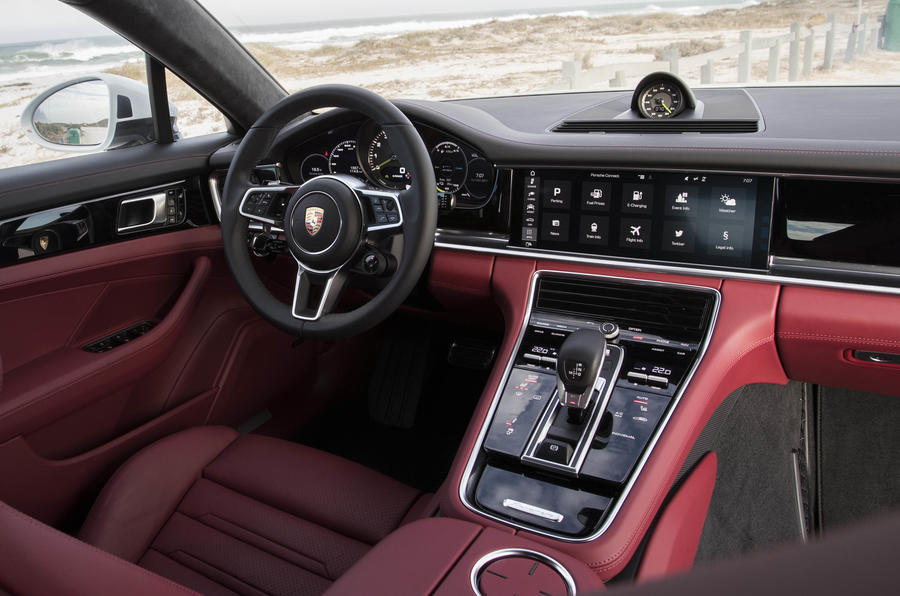 This is a difficult question to answer, and for two distinct reasons. First and perhaps more prosaically, the car that would be most illuminating by way of comparison does not yet exist. The V6 diesel version of the previous Panamera was by far the best selling but, in these days of top-down launches, it seems Porsche is in no hurry to replace it. The engine will come towards the end of the year, but until we see how it stacks up against the E-Hybrid, all the information many will require before making such a decision will not be available.

The other reason is because it depends so much on how the owner/driver intends to use it. This is not a car you can judge by traditional Porsche terms. Instead, it lives within a family of the most quiet and comfortable Porsches there has been, a car closer in execution to a pure luxury car. The E-Hybrid’s particular pitch is partly to provide its owner with a cloak of environmental responsibility but mainly to benefit his or her wallet. On face value alone, it’s a wildly better yet considerably cheaper car than the previous Panamera E-Hybrid. And once you’ve crunched all the numbers, worked out benefit-in-kind, what can be offset and the charges from which it exempts you, you may well conclude that for a person in your specific circumstances, such is the value it offers that no other could be considered. You might quickly conclude that, in such context, its dynamic limitations are really neither here nor there.

Ultimately, then, this is a Porsche to be chosen by head over heart. If that suits your precise purposes, proceed with our blessing. If not, hang around just a while until the range has fleshed out a bit further. We don’t know for sure, but when all the models have been released, it is hard indeed to imagine anyone save the aforementioned accountant considering this to be the best of the bunch.

Why not get the diesel you ask? Well, easily within the lifetime of this well made car ( even within 5 years)you won't be allowed to drive the diesel car into many cities and towns with the zero emission zones that are coming (moan as much as you like).
The car gets the petrol engine to start up at 87mph, which means at the maximum UK speed of 70 you are still all-electric, assuming you haven't done your 30miles yet. The PHEV can be held in petrol mode , say from the Cotswolds to London and then switch to the fully charged battery ( overnight electricity or regenerative brake charging or petrol power trickle charging)for the quiet glide through the centre free of congestion charge.
We just have to face it, the roads ore overcrowded and motoring policy has moved on and is going too much further.I used to love my old Porsche 911S in the 1980s but nobody, absolutely nobody ( even with the Panamera or new GT2) is going to be able to drive from Brighton to London Bridge in 45 minutes as i once did. I was once even stopped on the M23 and let of with a warning after doing 135mph, try that these days!
Electric traction is the future, of course it was even 'the present' for Porsche in 1900.
rogerhudson 19 January 2017

I forgot to mention that Autocar has a very snide attitude to electric traction. I hope they change (wake up?)soon. I await the test of the 2017 Renault Zoe ZE40.
AV 18 January 2017

One more thing about the beast

Oh if you think people buy Panameras and put big mileage on them think again, Porsche have over 70 out of a total of 111 second-hand ones with less than 20,000 miles on and only small handful that have done the equivalent more than 20,000 miles a year.
Zen_learner 13 September 2018

I bought the diesel, have changed to the hybrid. It does indeed save a lot, to the extent I forget to go to a petrol station! It has improved immensely. Only time that is not so is when you travel long distance, as it is not so easy to recharge then. But the car is a marvel to drive