BACK TO ALL NEWS
Currently reading: 2016 Hyundai Genesis G90 - specs and pictures
UP NEXT
Lotus confirms new sports car, end of Elise, Exige and Evora in 2021

Hyundai reveals the first model that will wear the Genesis badge, due out by the end of the year
Share
Open gallery
Close
Share story

The 2016 Hyundai Genesis G90 has been revealed, ahead of sales starting in Korea and a large number of other regions - but the company has ruled out sales in Europe for the time being.

The range-topping G90 saloon, which is called the EQ900 in Korea, is the first of six new Genesis models that will be rolled out over the next five years. It will be offered with a choice of three petrol engines - a 315PS 3.8-litre V6, a 3.3-litre twin-turbocharged V6 with 370PS, and a 5.0-litre V8 producing 425PS. All models are rear-wheel drive as standard, but four-wheel drive is available as an option. There's a single transmission in the line-up: an eight-speed automatic.

Hyundai claims the range-topping V8 G90 can reach 62mph from rest in 5.7sec, and that the new twin-turbo V6 can manage the same feat in 6.2sec.

The new Genesis comes with a more striking look, including a larger grille than that used on the outgoing car, and sharp lines which run the full length of the body. The Genesis design department is now headed up by former Volkswagen Group designer Luc Donckerwolke, who recently joined the company. The G90 is 5205mm long - so slightly longer than a regular Mercedes S-Class but shorter than that car's long-wheelbase version.

The cabin features plenty of technology, including a 12.3in high-definition screen in the centre of the fascia, three-zone climate control, wireless mobile phone chargers and a driver's seat with 22 areas of adjustment. In Korean-market cars the driver's seat will feature what Hyundai claims is the world's first smart posture system, which works out the optimal position for the driver.

Hyundai has confirmed that as well as Korea, the G90 and the other five new Genesis models - expected to include a smaller G70, a crossover, an SUV and a coupe - will be sold in the United States, Russia, China and the Middle East. The company has not revealed any plans to expand the range to Europe, though. Hyundai Motor UK boss Tony Whitehorn said, "The UK is more difficult because it is full of heritage. The three German brands – Audi, BMW and Mercedes – and Jaguar Land Rover dominate. It’s quite a challenge.” Lexus has had some success as a new-entry luxury brand, he conceded, “but mainly in America”. 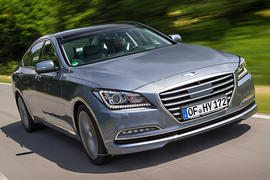 There's nothing one could really object to in the design. It is understated and quite handsome, but so nondescript that it reminds me of one of those de-badged and mildly photoshopped cars one sees in advertisements for other products, where the advertiser does not want to feature an identifiable make or model. It will probably sell well in the US and its home market, but elsewhere? Thanks to Bol for pointing out thecirony in Mark's comment. It was so subtle that I missed it and thought "Eh???".
bol 9 December 2015

I'm guessing Mark is being ironic

A winning combination of Audi's CrossFrontTM, and Mercedes' saggy arse. Looks like the car for the executive with absolutely no interest in cars whatsoever.
Outoftowner1969 9 December 2015

Loved the comment from Mark Rodriguez about it pushing non German marques out of the luxury car market. There's not a satnav in the world that will be able to find the place you're coming from, mate.
View all comments (8)