With a 22-foot Airstream caravan hitched up to the back of the latest Land Rover Discovery, we sample a new semi-autonomous driving feature
Open gallery
Close

Roughly 80% of Land Rover Discoverys will, according to the manufacturer, be used to tow a trailer, horsebox or caravan in their lives.

So although the latest Discovery Mk5 has shed its predecessor’s utilitarian skin in favour of something much more stylish, sleek and modern, Land Rover is making a concerted effort to emphasise that the car retains many of the practical traits of its much-loved relatives.

For example, the new Discovery will be offered with an optional piece of kit called Advanced Tow Assist, an evolution of an existing system that aims to make life much easier for those who are often faced with the potentially mind-scrambling challenge of reverse-parking a trailer or caravan. 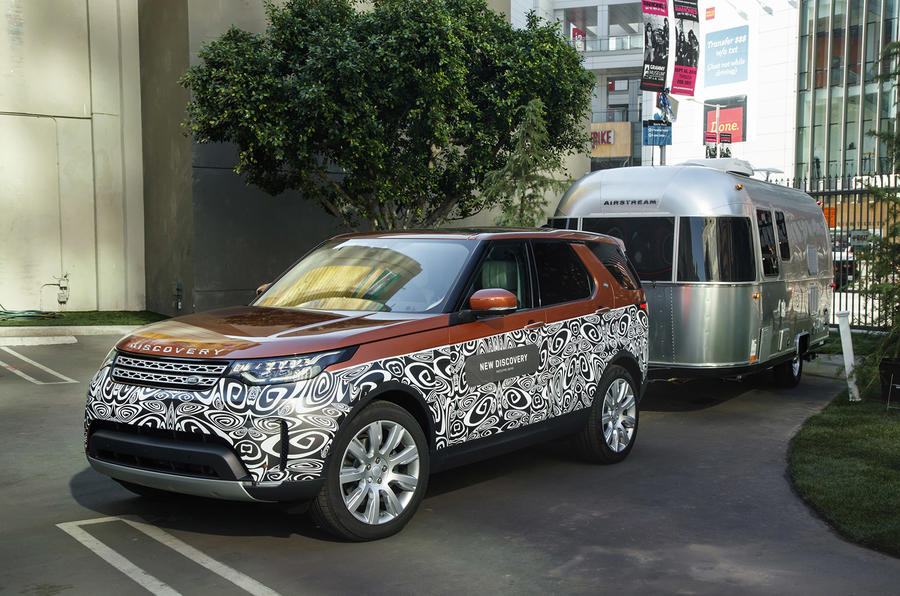 The original Tow Assist was introduced in 2010 to offer guidance to the trailer-towing driver by overlaying trajectory lines for both the car (in yellow) and trailer (in pink) on the infotainment screen during reversing manoeuvres.

As anyone who has ended up flummoxed when a left-hand down input on the steering wheel has resulted in the trailer heading in the opposite direction will attest, those trajectory lines can be a benefit.

Advanced Tow Assist goes a step further, incorporating semi-autonomous driving technology. Essentially, it allows the driver to concentrate on ‘steering’ the trailer, while letting the car to guide itself in whatever direction it determines is necessary.

So how does it work in practice? We had a go at parking a 22-foot, single-axle Airstream trailer in a Los Angeles lot designed to recreate an awkward parking space around a curve.

The Advanced Tow Assist function has been added to the rotary Terrain Response 2 dial on the centre console that selects the driving mode. Pushing the dial down causes it to pop up, and when you pulling it up it locks into place and engages Tow Assist.

Engaging reverse gear brings up the split-screen reversing camera display, and pressing the Tow Assist icon on the touchscreen brings up a display on which the car’s trajectory lines have disappeared, leaving only the trailer’s path. This is all the information the driver requires. 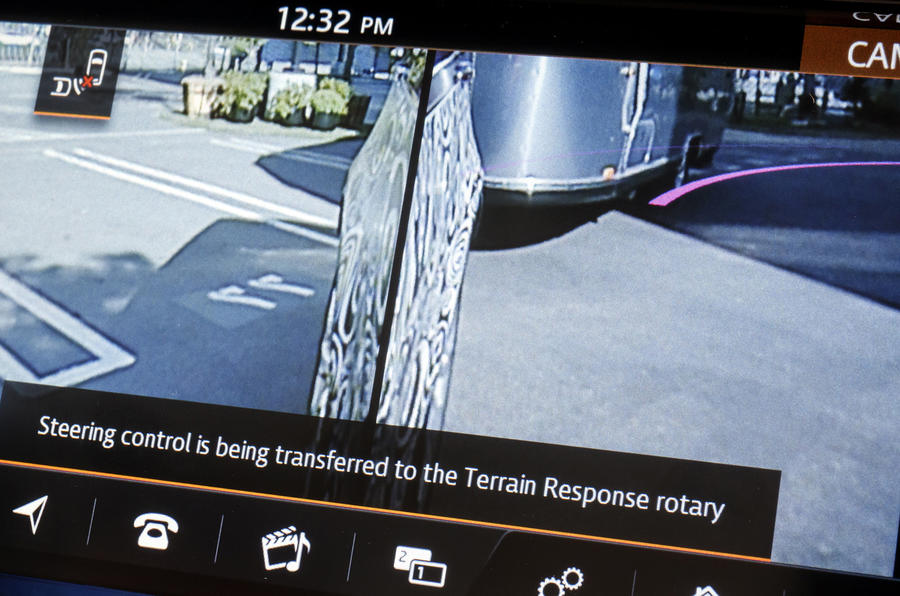 Now the Terrain Response dial is used to guide the trailer. You still need to control the speed using the pedals (the slower you reverse, the more time you give yourself) but the Discovery steers of its own accord, calculating the angle of reverse steering input that’s required.

To begin with it feels counterintuitive to control the vehicle using a rotary dial, particularly when the steering wheel is whipping left and right of its own accord. I found myself paying scant attention to my physical surroundings as I focused on the reversing camera - probably not a sensible state of affairs when you’re reversing an awkward long load into a tight space.

Nevertheless, as I got comfortable with the system it made reversing much simpler, particularly when I learned to appreciate how the slightest of adjustments on the Terrain Response dial make quite a significant difference to the trailer’s angle of attack. 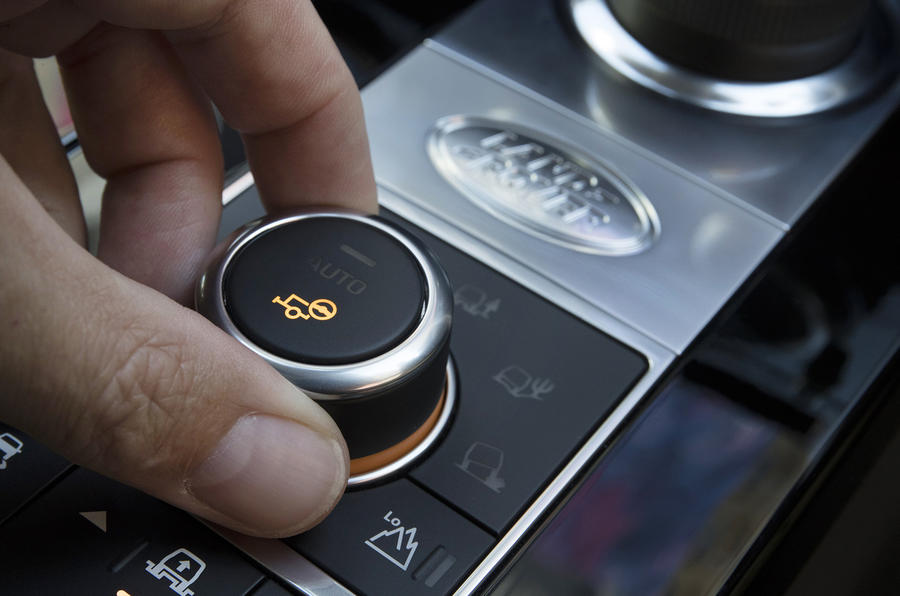 One other factor is that you can't see the top of the trailer in the reversing camera, so it's worth assessing any overhanging obstructions beforehand if you're parking in unfamiliar territory.

If you end up in a situation where the trailer is neatly lined up but the towing Discovery is crooked (as I did) you simply leave the rotary dial on a dead-ahead trajectory and the system will turn the car around the pivot point of the trailer to straighten out the vehicle. On the other hand, if the system senses that you’re asking for an amount of steering that’s going to end up with car and trailer jacknifing, it sounds an alert. 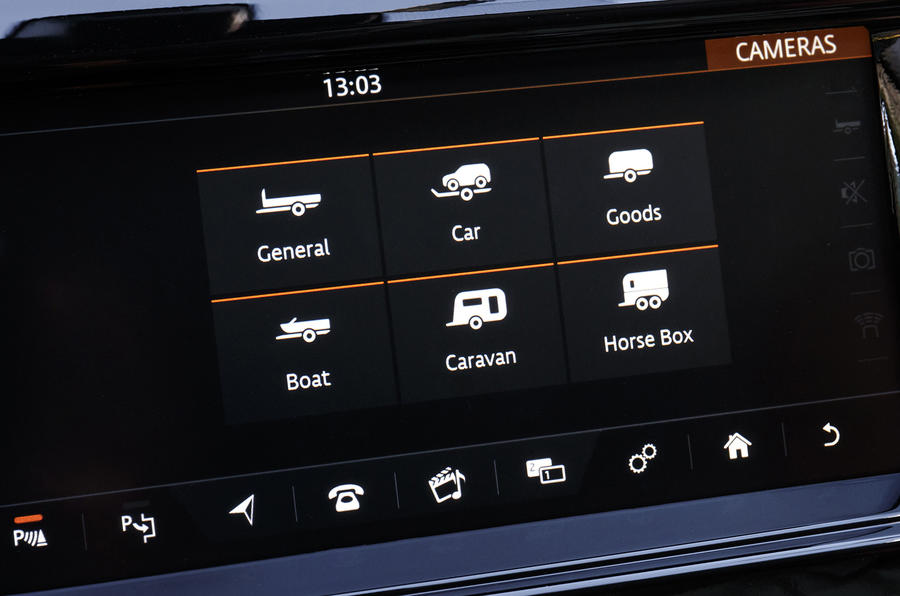 Before it can be used the system requires a simple calibration process that includes asking drivers for some basic dimensions and other details of their loads, such as how many axles it has. Once the information is inputted it is stored in the system, and owners who haul more than one load can toggle between them in the menu.

The second element of calibration is affixing a tracking target sticker to the front of the trailer where it can be seen by the reversing camera. This target sticker is the key to the technology that makes the system work, enabling the car’s computer processor to determine the angle of the trailer.

Land Rover isn’t the only company rolling out this kind of technology. The Audi Q7 offers a variation on the theme, for example. It's a useful system for those who regularly find themselves in tricky towing situations and a neat example of how autonomous driving can support the driver rather than completely rob them of control.

So this has been on Audis and VWs for over 1 year without a dedicated review. Was it just reviewed today because Matt got a nice free lunch and day trip from JLR...? (Still, at least it's a useful review and not focussed on high speed handling of reversing trailers - so please keep the reviews coming of new car features which helps decide if they are worth buying as expensive extras!!!)
Kamelo 16 November 2016

So this has been on Audis and VWs for over 1 year without a dedicated review. Was it just reviewed today because Matt got a nice free lunch and day trip from JLR...? (Still, at least it's a useful review and not focussed on high speed handling of reversing trailers - so please keep the reviews coming of new car features which helps decide if they are worth buying as expensive extras!!!)

Free lunches are always worthwhile. Even if you have to sit in a caravan to eat it.

If as you say "Roughly 80% of Land Rover Discoverys will, according to the manufacturer, be used to tow a trailer, horsebox or caravan in their lives." why is a tow bar an option pack and not standard fitment?
View all comments (4)